The Maxi-Mini is a hybrid done right.

Join the Conversation (0)
Minis are celebrated for their quirky design, frugal efficiency and telepathic go-kart-like handling. Even the most maxi-Mini of the bunch, the Countryman, has been engineered to tick these boxes without sacrificing much for its relative size.

Plug-in electric hybrid vehicles (PHEV), on the other hand, are renowned for being even more frugal, but they’re typically heavy and a bit numb when it comes to fun in the bendy bits.

The 2022 Mini Cooper SE Countryman All4 is the PHEV version of the brand’s compact crossover. In fact, it's Mini’s only PHEV. As such compromises were made to earn its environmental merit badge. Most notably, the SE must lug around an extra 244 kg of lithium-ions and electric motor gadgetry – which is never a good thing in the handling department.

So, the question becomes: Is the SE Countryman still a “Mini” or is it just a PHEV in quirky clothing?

Save for a mechanical frog from a Michael Bay movie, there is really no mistaking the SE Countryman for anything other than a Mini. Tweaks to the second generation of the car see a more aggressive front end thanks to a new grille and bumper. My tester forewent the available Piano Black eyeliner surrounding the headlights in favour of chrome which, on the British Racing Green lacquer, looks fantastic. 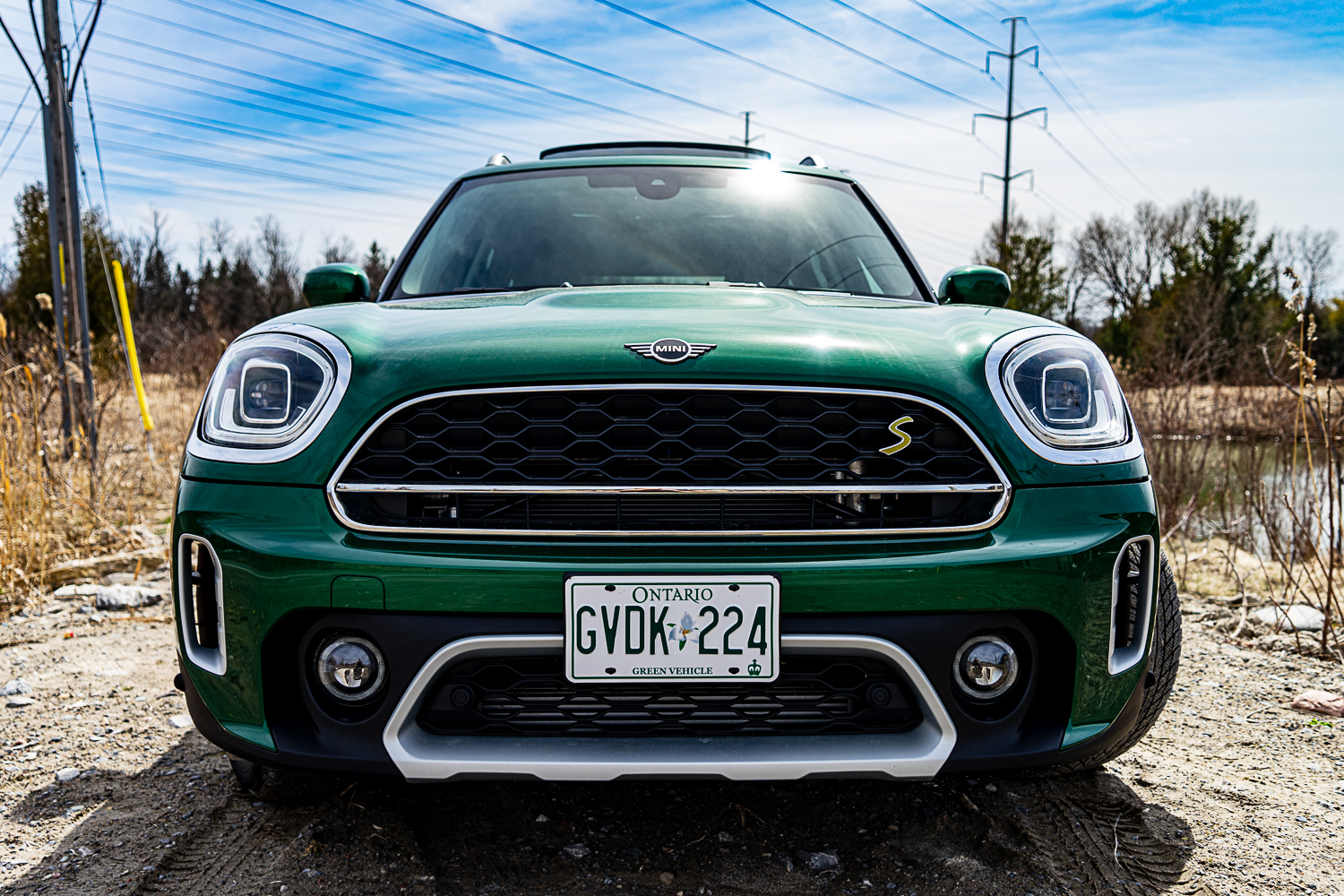 I still love Mini’s use of the signature Union Jack tail lights and feel like the proportions of this compact crossover are exemplary. It has bulges and shapely sheet metal where it needs them and clean, flat lines where it doesn’t. The plastic fender flares could probably disappear but I suppose they are required items if you want the world to know you’re adventurous these days.

The interior is much the same, in that it is unique to Mini. What started as quirky, in the form of chrome toggles and large, circular displays, have become defining features that are better executed than most “futuristic” cockpits. Take those toggles for instance. They work perfectly, with each serving a specific function while providing haptic feedback and the accompanying knobs and buttons do much the same. 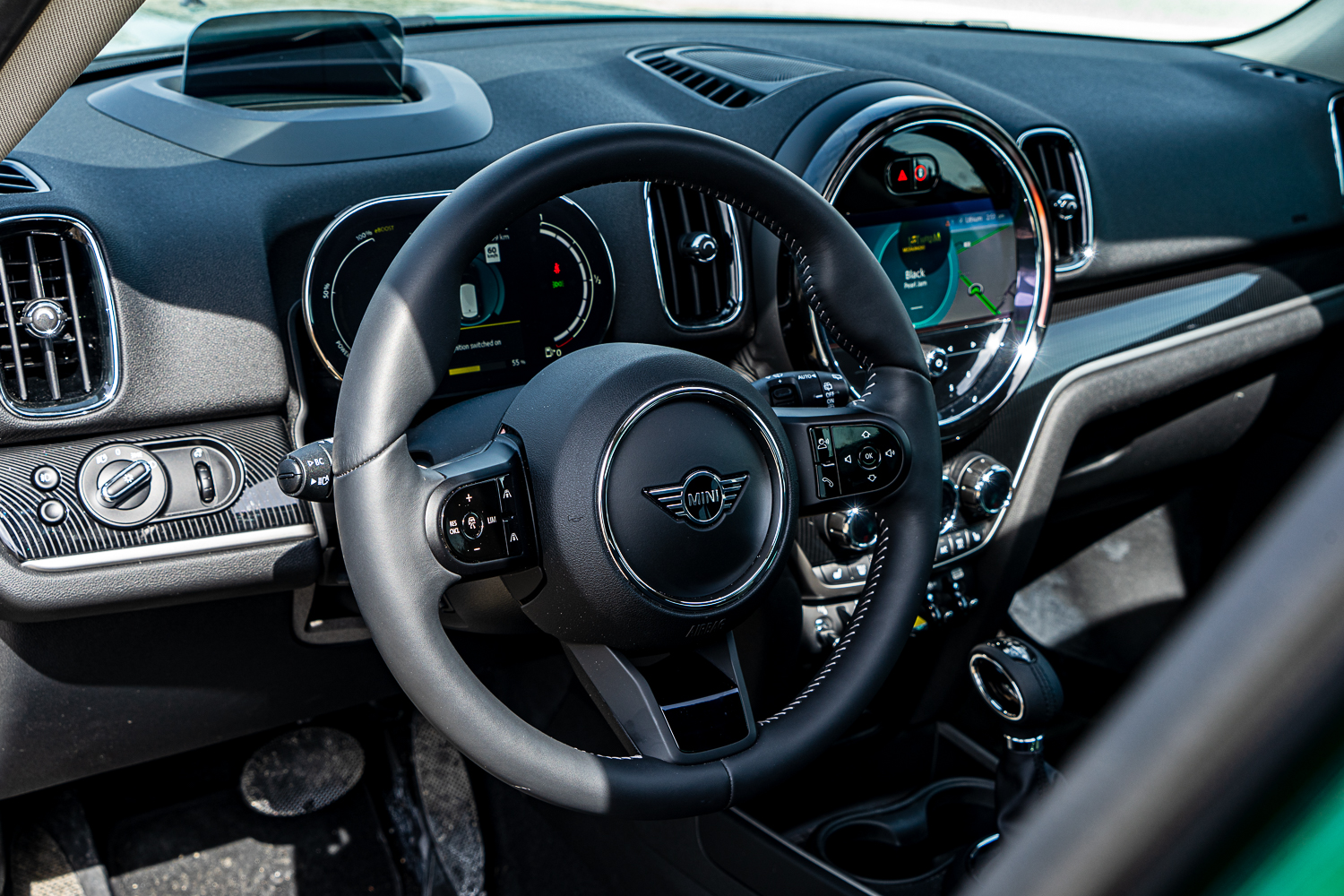 The infotainment screen is large and characteristically colourful. Control via the Mini version of iDrive is intuitive and easy enough to manipulate while keeping your eyes on the road. The baked-in navigation system is a little too playfully rendered for my liking but it works nonetheless. And if you don’t like it and have an iPhone, CarPlay comes standard.

It Can Do The Electric Boogaloo!

From the sporty and supportive driver’s seat, I set off in the SE Countryman with “MAX eDRIVE” mode selected. This makes the SE work in all-electric mode, rendering its engine to ballast. Acceleration was competent, although nothing earth-shattering. With a 35-kilometre trip from Mini HQ to chez-Matt, I wanted to see if a fully charged cell would get me there as Mini advertises it should (electric range is estimated up to 40 km).

Apparently, my lead foot insisted we burn some dinosaurs while passing someone on the highway. Once you exceed a certain speed (which I choose not to advertise here), the system automatically shifts to engage the turbo-charged engine, so blame me and not the car for this one. 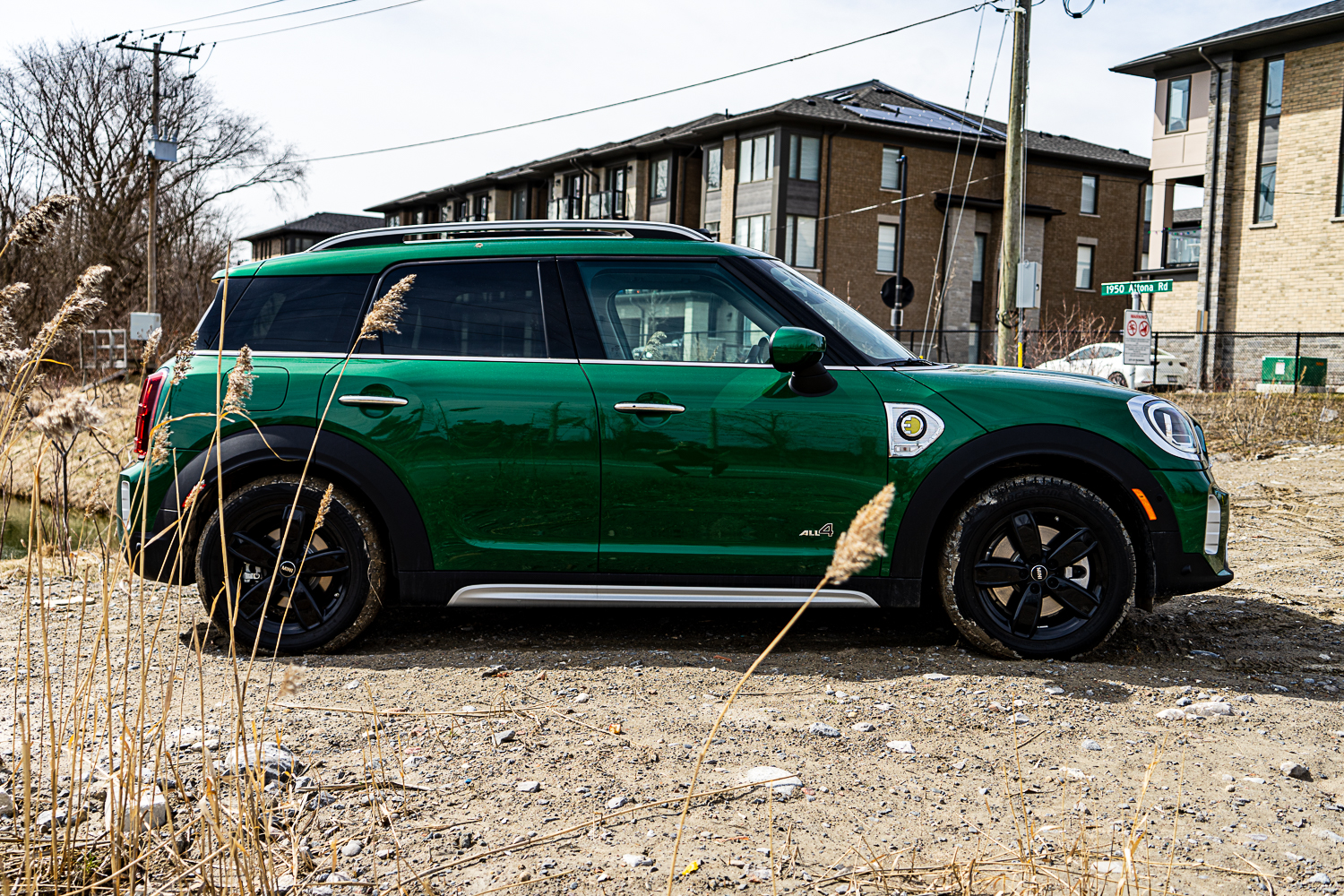 Over the course of the workweek though, I did aim to rely solely on batteries for errand running and such and can confirm that the SE Countryman performed perfectly. Whether it was grabbing groceries, making a run to donate some old clothes or hopping out quickly for a takeout treat or two, not once did I burn an ounce of fuel. With the SE plugged into a standard wall socket every night, I could hop in and enjoy the use of a fully charged eco-warrior. Provided you don’t need to trek far, this SE Countryman works quite well as an electric vehicle. In fact, over the course of that week I only used 4.55-litres of fuel to cover just under 230 km of driving.

So it’s definitely frugal, but how about that fun stuff?

The powertrain layout in the Countryman SE stations a 1.5-litre, turbocharged, three-cylinder engine under the bonnet and an electric motor in the boot. That petrol burning triple is good for 134 horsepower and 162 lbs-ft of torque heading to the front wheels. That twist hits appreciably low in the rev range (1,250 rpm) and the ponies pick up where it leaves off at 4,500, so the power curve is fairly linear. It has a playful and raucous soundtrack too when it's on the boil, and is appreciably engaging. Add to that the instantaneous thrust of 122 extra torques (and 87 hp) from the rear and you have a car that - when the right mode is selected - will leap from the line and easily out-hustle most traffic. 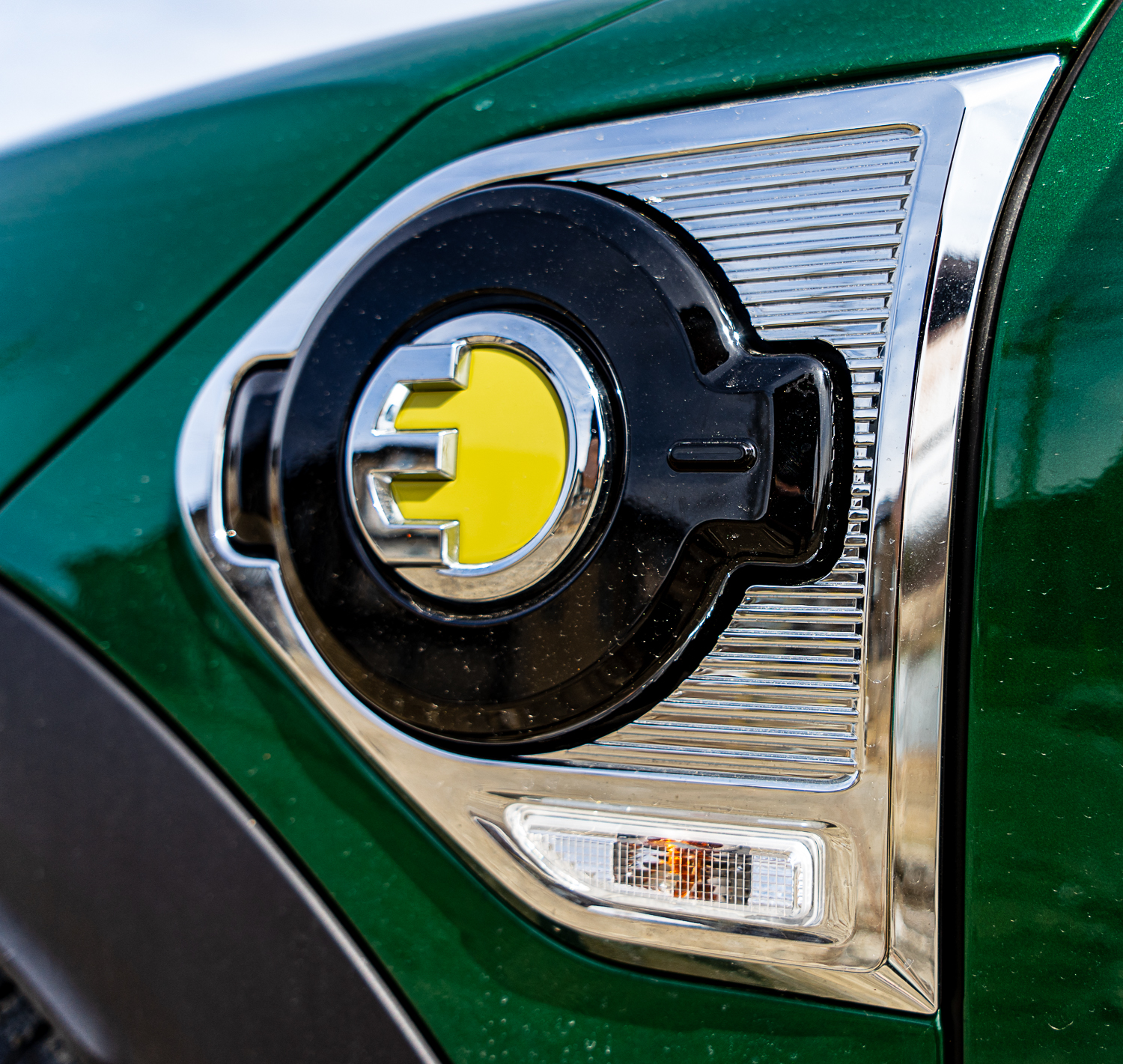 The 10 kWh battery that powers the rear motor (and accounts for much of the extra heft) sits low, beneath the back seats. That means the mass of the SE is fairly well centralised, and this positioning also helps with rear-wheel grip. This is important because this layout also means that the Countryman SE, when operated in purely electric “MAX eDRIVE” mode, is a rear-wheel drive car. Even more important is the fact that this layout gives the SE Countryman the most balanced weight distribution in the entire Mini lineup – 53% front, 47% rear.

That balance makes the SE Countryman feel near as nimble as a John Cooper Works 3-door in a corner. Obviously, since it sits a bit higher there is detectable body roll but it's predictable and still feels sharp. With Sport mode toggled and Auto eDRIVE engaged, both motors do their thing to deliver the most focussed performance they can. At times, the ALL4 assist from the electric motor feels as if it steps into e-diff territory, helping pivot the SE with added precision and poise.

More than that, the steering gets weightier in a good way and provides discernible feedback. The suspension never felt overworked when I was pushing hard and even the brakes, which are regenerative, deliver excellent pedal feel for modulation.

So yes, the SE Countryman is most definitely a Mini. And it achieves this not in spite of its hybrid powertrain, but because of it.