Join the Conversation (0)
Despite its recent sales slide, the C-Class remains the bestselling Mercedes-Benz nameplate over the past decade. The outgoing W205 has sold over 2.5 million sedan and wagon units worldwide since it debuted in 2014, and more than 10.5 million dating back to 1982 when it was known as the 190.

For 2022, the C-Class is all-new again. The fifth-gen W206 is bigger, with a new electrified powertrain, more tech and a fresh design. Some (including me) may lament the passing of turbocharged V6 and V8 powertrains, especially in the forthcoming C 63, but Mercedes is committed to electrification, so we’d best all get used to the new reality.

At any rate, the new C-Class, which is only available in Canada as a C 300 4MATIC sedan (C 43 and C 63 models arrive next year), offers an interesting glimpse into Mercedes’ short and medium-term future. 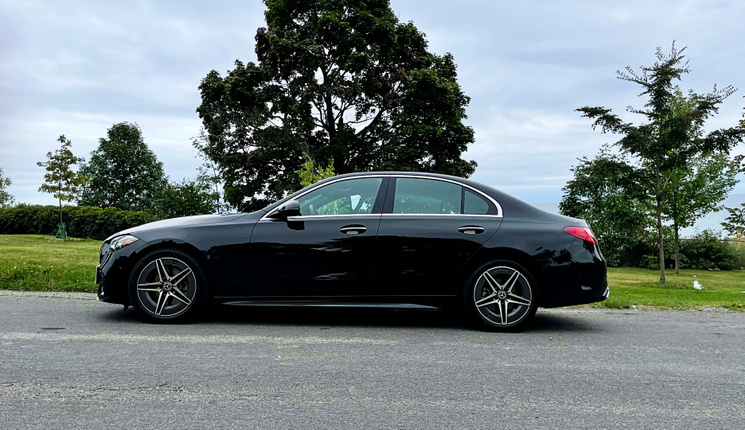 Under the hood, the ’22 C-Class has a single powertrain option, a 2.0-litre turbocharged four-cylinder engine that produces 255 horsepower and 295 lb-ft. of torque. The big news here is electrification which comes in the form of a 48-volt mild hybrid system which makes gliding, boosting, and energy recovery possible while also reducing fuel consumption.

The engine uses an integrated starter-generator (ISG) to run the 48-volt mild hybrid system, which adds 20 horsepower and 147 lb-ft. of torque. The powerplant also makes use of a more advanced twin-scroll turbocharger that was developed by close collaboration with the company’s Formula One team. 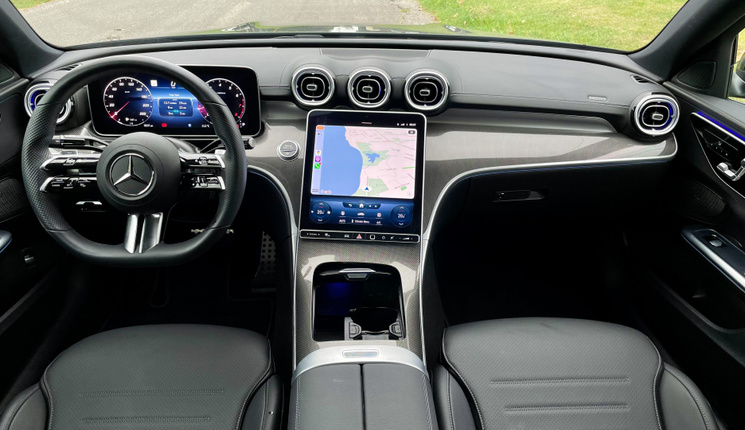 Putting the power to the ground is a 9G-TRONIC 9-speed automatic transmission, which works with the car’s electrification. For instance, the electric motor, power electronics, and transmission cooler are now located within or near the gearbox.

The transmission also features new electronics, including a multi-core processor with increased computing power, but with fewer interfaces, which Mercedes claims has reduced gearbox weight by 30 percent. The 4MATIC all-wheel drive system gets variable torque flow between front and rear axles depending on driving conditions and drive mode setting.

In terms of design, the new C-Class bears a strong resemblance to its predecessor, where differences only become apparent upon close inspection. Its exterior embodies what Mercedes calls “forward motion” with large power domes on the hood and, “cab-backward” design, with the windshield and passenger compartment moved rearward for a longer dash-to-axle ratio (longer hood). 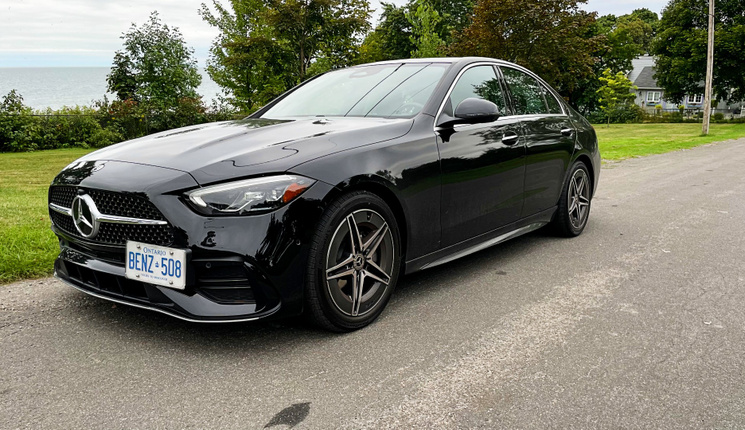 But as for the things that one usually takes note of first, such as grille, headlights, and air intakes, they’re new too, but they change only by degree. Less bulbous, more angular and with a new grille design, but unmistakably C-Class. The rear of the car, due to new two-piece LED taillights (a first for the C-Class), does look more distinctive than its W205 predecessor.

Where the new car really charts its own course, however, is in the cabin. The aging W205 interior is gone, replaced with an environment that is much more high-tech, led by two large digital displays, a 11.9-inch multimedia touchscreen and a 12.3-inch instrument cluster.

In terms of design, the interior of the C-Class has a minimalist feel with only a handful of buttons located along the bottom of the multimedia screen and a start-stop button, in place to break up large expanses of centre console and dash that flows outward to bisect the driver and front passenger zones. 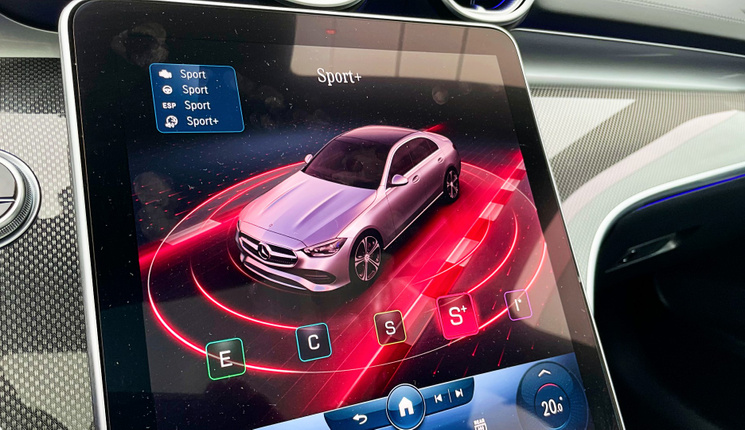 The Black Artico seats offer good support and articulation, and the thigh cushion extends, which is a big plus on long trips. The plastics, metallic accents and carbon fibre-styled trim panels look and feel good to the touch, and controls and switches operate with little fuss.

Standouts for me are the two screens, which offer beautiful pin-sharp HD resolution and loads of customization, the ambient lighting, which Mercedes does exceedingly well, and the general comfort of the interior. There’s ample room for stretching out, outward visibility is quite good, and the AMG touches add just enough dynamic presence.

I’m not a fan of a transmission gearshift located on the steering column, as it is quite unnatural, and the steering wheel has too many buttons and track pads for my liking, but I’ll admit these are things one can adjust to over time.

As for the drive, the C-Class is a very pleasing car to drive on most road surfaces in all driving modes. I tend to gravitate towards Sport and Sport+ with their sharper throttle mapping, quicker transmission shift patterns and slightly louder exhaust, but this car is just as satisfying to drive in less aggressive modes. 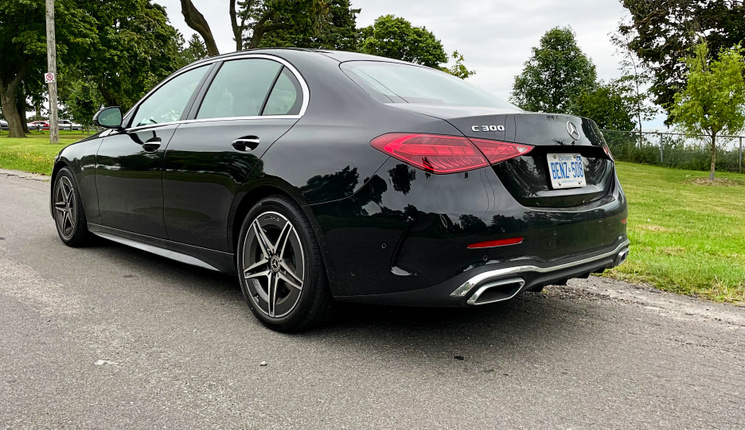 Mercedes has spent a great deal of time refining the C-Class powertrain, ride and passenger comfort and it shows. Acceleration from the 2.0-litre turbo four isn’t bursting with power, but it can still hustle the C-Class from 0-100 km/h in six seconds flat without too much racket. The 9-speed automatic is a slick-shifting gearbox with available paddle shifting, although most owners are likely to leave them be.

With the sport package, the C-Class has a more sporting look inside and out, but that appearance belies its character a bit, as the car possesses a quiet cabin and comfortable ride on most road surfaces. Its steering feels light and direct, and it tracks pretty flat through everyday cornering.

In sum, the new C-Class is an appealing option in the shrinking, but still vital, compact executive sedan market. SUVs continue to eat its lunch on the sales charts, but that is a sign of the times, and not a fault of a car that proudly carries Mercedes sedan legacy forward.