A strong heart isn’t enough to allow this little Mazda to be taken seriously in the world of electrification.

Join the Conversation (0)
Mazda’s a small car company. Yet in recent years, it has proven that devotion and obsessive attention allow it to compete against larger corporate entities. So, when it announced that the quirky MX-30 crossover would be its first attempt at electric propulsion for the masses, we all collectively knew that while the product could potentially lag behind its competition from a technical standpoint, it had the potential to win over consumers’ hearts through compelling design, driver engagement, and a downright unique experience.

Sadly, none of that happened.

Here’s the cold hard truth: in the harsh world of electric vehicles, if you’re not out there with good range and efficiency at an affordable price, no matter how cute your product is, you’ll quickly get eaten alive by the competition. That, unfortunately, seems to be the case with Mazda’s first all-electric vehicle.

The Foundation Is Solid

Mind you, the basics that would make the MX-30 a cool electric SUV in the same way an MX-5 is the coolest roadster in the universe, are all here. Like all Mazda products of late, the MX-30 looks the part, mostly due to an elegant and organic design language that conveys maturity and refinement, The product itself is built like a tank too, with tight panel gaps, superb paint quality, and neat styling details like LED blinkers that blink with a delay to mimic an old lightbulb. That’s just rad.

About the same size as a Hyundai Kona but appearing considerably sportier thanks to a coupe-like profile, the MX-30 is the only electric vehicle on the road to be equipped with suicide doors. An homage to the RX-8 sports car, these doors give this 2+2 utility vehicle much appreciated practicality, especially for accessing the rear seats. When opened, they yield an enormous opening for both front and rear passengers. Once back there, though, tall people might not enjoy that rear seat’s cramped feel. 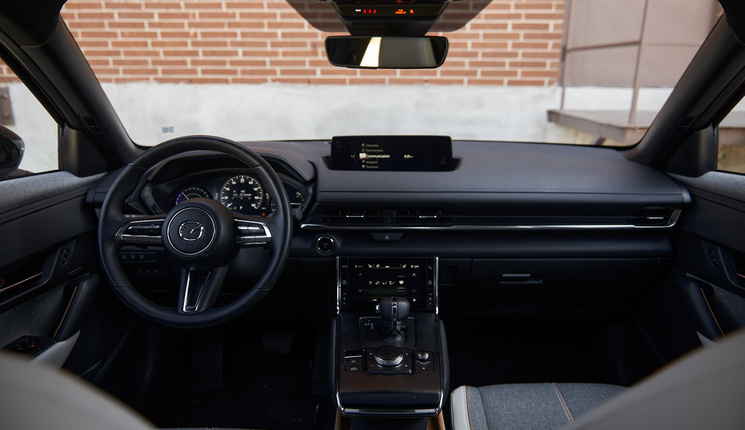 And once inside, you’ll be greeted by the expected Mazda build quality and upscale materials, instantly making this vehicle look and feel like something that should come out of a premium nameplate. While at it, Mazda figured it would be fun to integrate sustainable materials, such as recycled cork on the center console and seats and dashboard components composed of recycled plastic bottles. It all somehow works, beautifully blending in with the MX-30’s design language.

Once seated inside, the MX-30 is comfortable – at least up front – with superb ergonomics thanks to simple, yet effective controls that are well laid out. Mazda continues with its BMW iDrive style central command knob to control the infotainment system. It’s quick to react and intuitive to use.

Mazda qualifies the MX-30 as a secondary urban vehicle with its main competitor being the MINI Cooper SE. With that in mind, it should be understandable that its very low EPA-rated range of 160 kilometers would be enough for urban motoring. 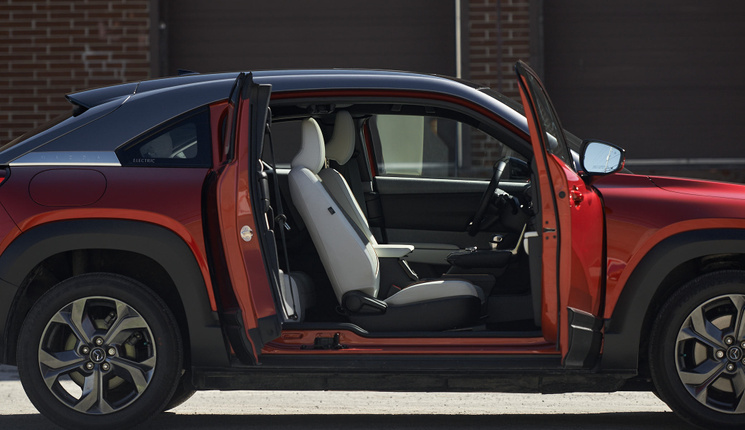 The issue is, not only do other urban EVs pull better range – i.e., the Cooper SE – the MX-30 is priced with models that offer twice and, in some cases, almost three times that amount. Pricing kicks off at $44,100 for a base GS model. Our tester, a fully loaded GT, comes in at a whopping $51,165.

Yes, the MX-30 is eligible for all the EV rebates, and if you live in the province of Quebec, you’ll get $12,000 off the final price. However, for similar money, one can own a Volkswagen ID.4 that’s both larger, more practical and offers much more range. Even the dated Chevrolet Bolt EV, a considerably more affordable electric car than this Mazda, will pull north of 400 km on a full charge. 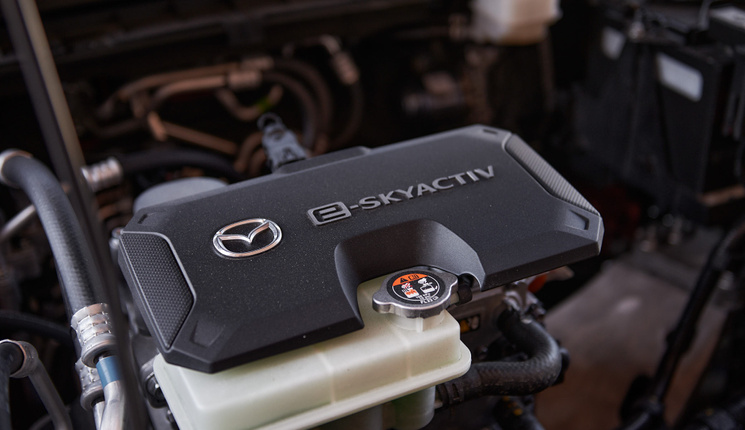 The low range and high price tag are only the tip of the MX-30’s problems. Some will argue that because its 35.5 kWh battery has such a low capacity, it doesn’t take much time to fill up. That’s only part of the story as the 50-kW charging rate is underwhelming by today’s standards. I’ll add that the two times that I connected the MX-30 to a compatible charger during a hot summer’s day, it never managed to go over 15 kW. May I remind you that a Kia EV6 can charge at 350 kW.

I thought that perhaps the MX-30 would redeem itself out there on the open road. Historically, Mazda’s have been engaging to drive thanks to a connected feel and superb chassis calibration. But no. The MX-30 doesn’t do well during spirited driving. While smooth and refined, its chassis dynamics are totally flat, with no desire to make its driver push it on twisty roads. And when you do try to have a bit of fun with it, the darn thing squeals its tires and understeers annoyingly as if pleading to make it stop.

Overall power is lukewarm as well. With only 143 horsepower and 200 lb-ft of torque on tap, the MX-30 isn’t only slow for an electric car, it’s slow, period. Even the regenerative braking system – which only has one level of recuperation – is a huge letdown. And don’t get me started on the 28 kWh/100 km combined energy consumption average I recorded during the time I had it.

This is possibly the first bad review I’ve given a Mazda product in years. The thing is, I came at the MX-30 wanting to like it in the same sense I adore the MX-5 roadster, the Mazda3 compact car, and the CX-5 and CX-30 crossovers.

Regrettably, with this vehicle, you feel Mazda’s heart, its willingness to perform and impress, albeit its limited resources. But that devotion is choked by a company that seems unable to keep up with a rapidly changing automotive landscape.

If the MX-30 was $10,000 cheaper, it would be one heck of a convincing urban EV. But the way it is priced now, you’ll get much better elsewhere.