Join the Conversation (0)
It was precisely three decades ago, April 1992, that Jeep began producing copies of the then-new Grand Cherokee. While many of our commutes and drives are awash with SUV-shaped vehicles, pressing a rig with off-road vibes into daily family duty was a relatively new concept 30 years ago. Today, most of us don’t leave home without one. 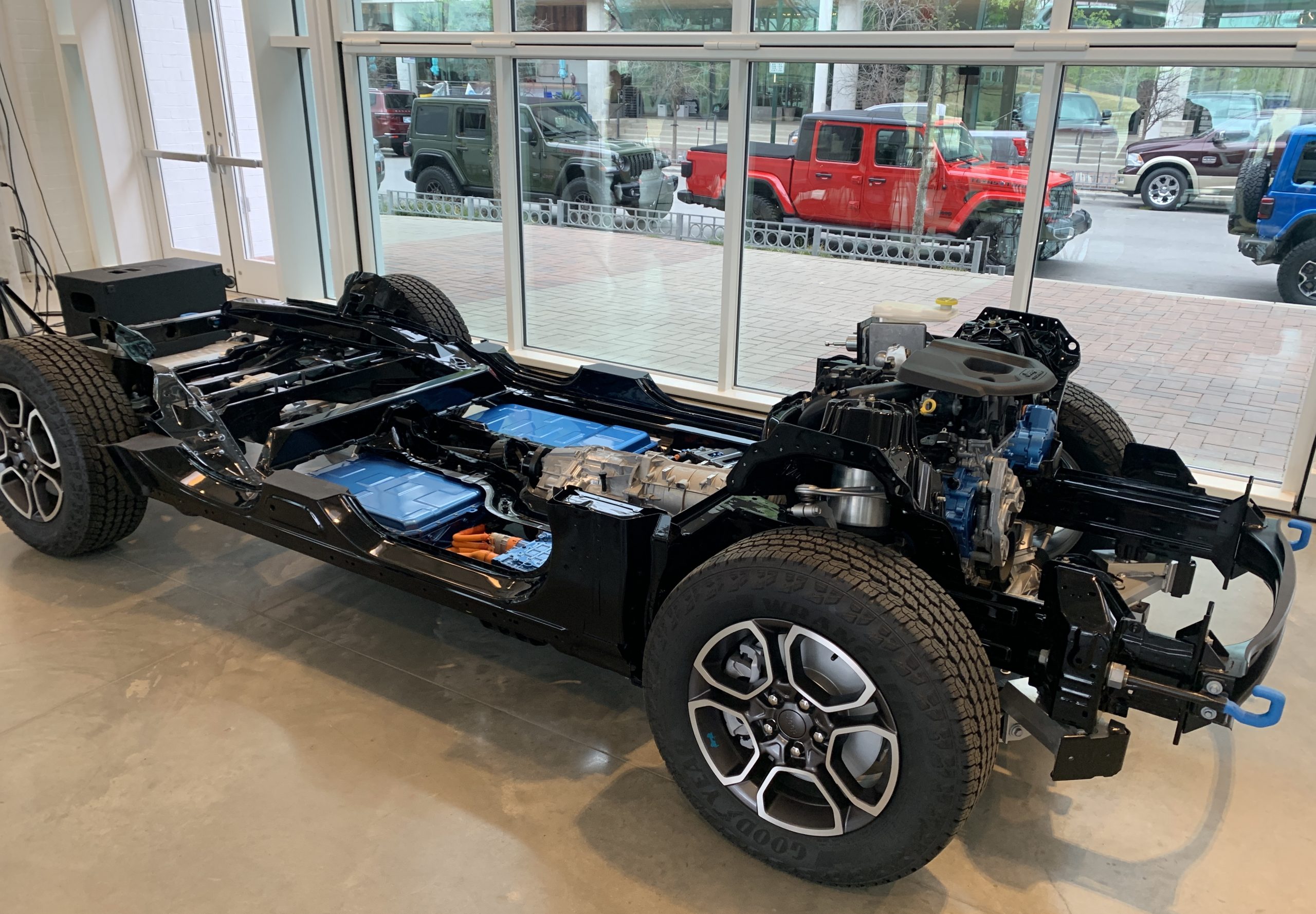 Jeep has long cemented itself as the purveyor of vehicles which can tackle heady off-road obstacles, even if those same vehicles rarely step a tire off the beaten path. Hollywood will tell you that having the ability and having the desire are two completely separate things, a mantra which applies to many (non-Wrangler, at least) Jeep owners. It’s the same phenomenon which explains why your author has a fantastic-looking Patagonia jacket in his front closet but would rather have a root canal than go hiking. My idea of roughing it is a hotel with no wifi.

This anecdote helps explain Jeep’s sales success. For the 2022 model year, they are welcoming a fully overhauled Grand Cherokee lineup, one which includes the electrified 4xe models we recently wheeled deep in the heart of Texas. Banking on the assumption there will be an array of customers likely to approach an electron-fuelled Grand Cherokee with interest, Jeep has decided to offer the powertrain in several different trims. In other words, the 4xe ain’t just a simple box on the option sheet; it’s an entire family. 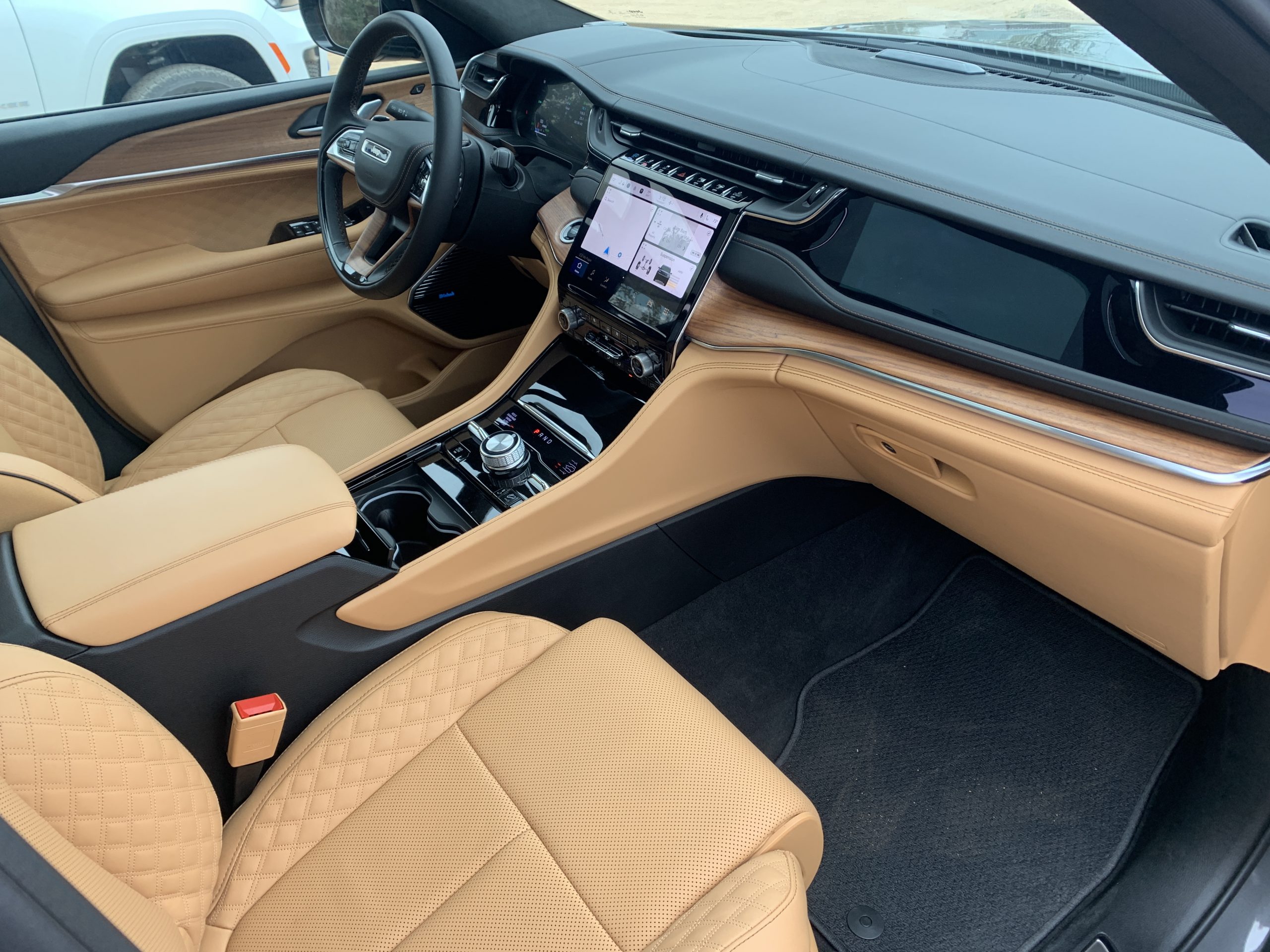 The 4xe badge denotes plug-in hybrid technology, providing roughly 40 kilometres of silent all-electric driving thanks to juice stored in a 17.3 kWh battery. Packaged under the floor and protected by a series of skid plates (remember the off-road credo?), it includes heating and cooling circuits to keep the thing at an optimum temperature, doing so by deploying either a dedicated heater unit or a chiller that uses the Grand Cherokee’s air-conditioning refrigerant to reduce coolant temperature as the situation demands. In other words, this is much more than simply heaving a couple of 9V batteries into an existing powertrain and calling it a day.

Working in concert is a 2.0L gasoline-powered engine, one with direct injection and a twin-scroll turbocharger mounted directly to the cylinder head, and a transmission-mounted high-voltage motor generator which takes the place of a traditional torque converter. Two clutches manage power and torque from the e-motor and engine, a duo good for 375 horsepower and 470 lb-ft of torque. That’s well beyond the level of power found in the 5.7 Hemi V8. If you’re wondering, the 4xe guts seem to tack on a 500lb weight penalty (Trailhawk 4xe is 5,524lbs versus Trailhawk Hemi at 5,017lbs) yet payload ratings remain nearly identical. Towing capacity is shaved to 6,000 pounds.

In addition to the typical drive modes which pop up in just about every vehicle these days (normal, snow, mud, and so on), the powertrain can be set to operate in three different ways: hybrid, electric, and e-save. The former blends torque from the electric motor and gas engine, optimizing battery and engine power to deliver the best combination of fuel efficiency and performance, while the latter prioritizes the gasoline engine and saves the battery charge for later use. Electric, as the name implies, is silent motoring until the electrons are depleted or the driver calls for wide-open throttle, at which time the gasoline-powered engine kicks in automatically. 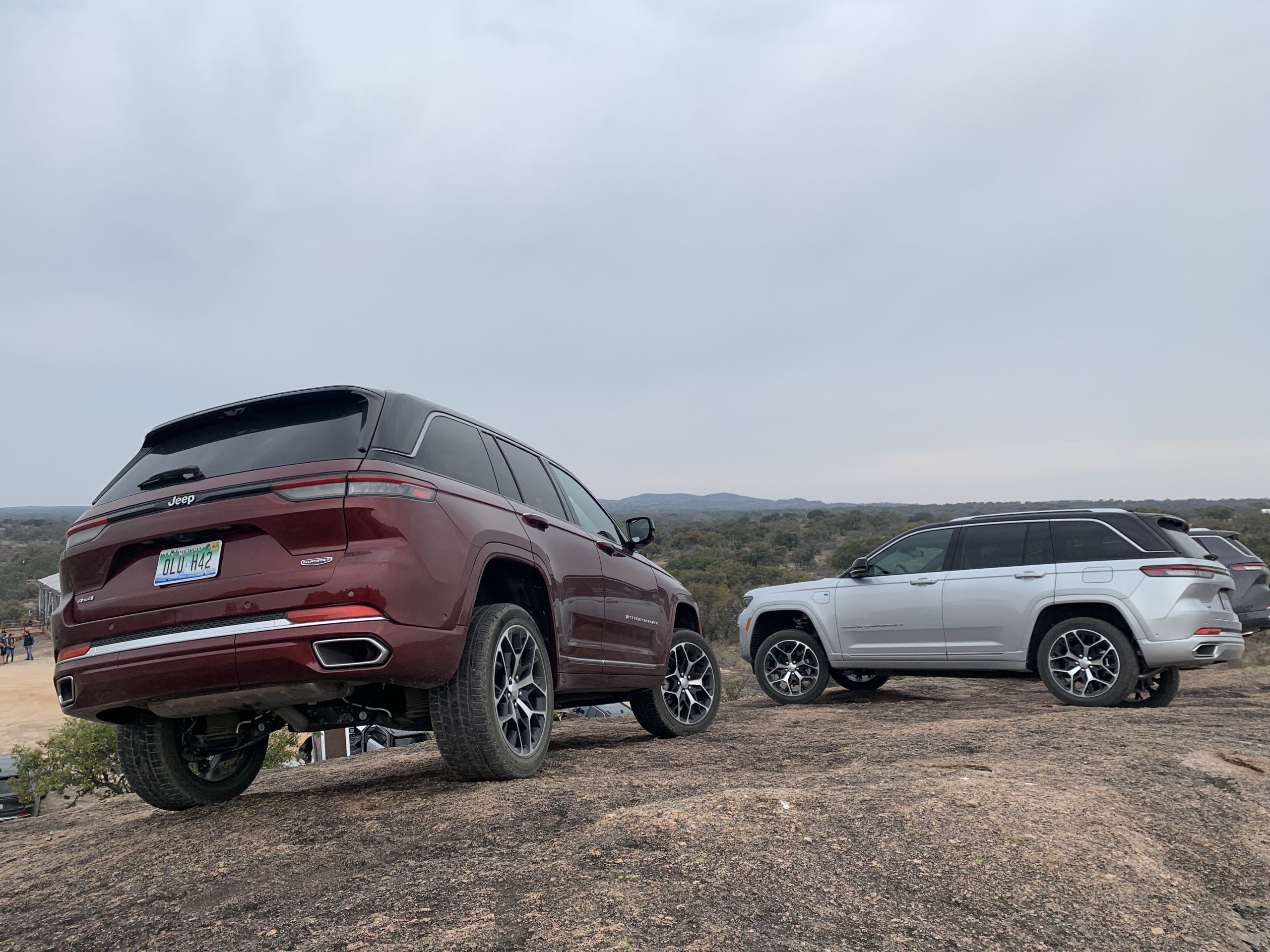 Trying this zero-emissions mode on the streets of a residential neighbourhood revealed silent operation at suburban speeds, with this Grand Cherokee running on its battery only and saving expensive fuel and emitting a subtle electric whine. It should be noted a weird electrical glitch which caused some features such as suspension height adjustment to vanish was likely caused by our test vehicle’s lot in life as a static display and was solved by a simple ignition cycle.

Power is obviously muted compared to its hybrid operation, since the gasoline engine isn’t contributing to forward motion. In the flat streets of suburbia, this isn’t an issue. We did find a paved hill onto which we accelerated from a stop out of a side street, a power demand which caused the 2.0L engine to kick in with all the subtlety of a pro boxer’s left hook. Transitions from all-electric to hybrid were much smoother in other scenarios, such as at speeds on gentle grades or on a flat highway. Jeep engineers told this author they know the transition may not be seamless in every single scenario, given the infinite number of situations into which a family rig like the Grand Cherokee will be pressed. In this, they have a point.

Know where else they have a point? Off-road. Jeep has impressive chops in such environments, and retaining the legendary Trail Rated badge in certain 4xe trims was very important to the development team. Jeep didn’t shy away from pressing this large SUV into tough situations, taking a similar rocky route used for Wrangler drives in the past. With the air suspension cranked up to about 11 inches of clearance and its transfer case in low-range, we creeped up and over challenging rock obstacles which cocked drive wheels into the air and elicited the scattered squeak from a nerve-jangled passenger. Modulating power was easy thanks to a well-sorted throttle calibration and the 4xe electric gubbins providing plenty of right-now torque. Trailhawk trims are further equipped with a rear limited-slip diff for more grip, sway bar disconnect for extra wheel articulation, and Selec-Speed Control which is essentially off-road cruise control for smoothly ascending and descending inclined terrain. True to its off-road word, all high-voltage parts are sealed and waterproofed, with Trail Rated trims capable of water fording up to 61 cm (24 inches). 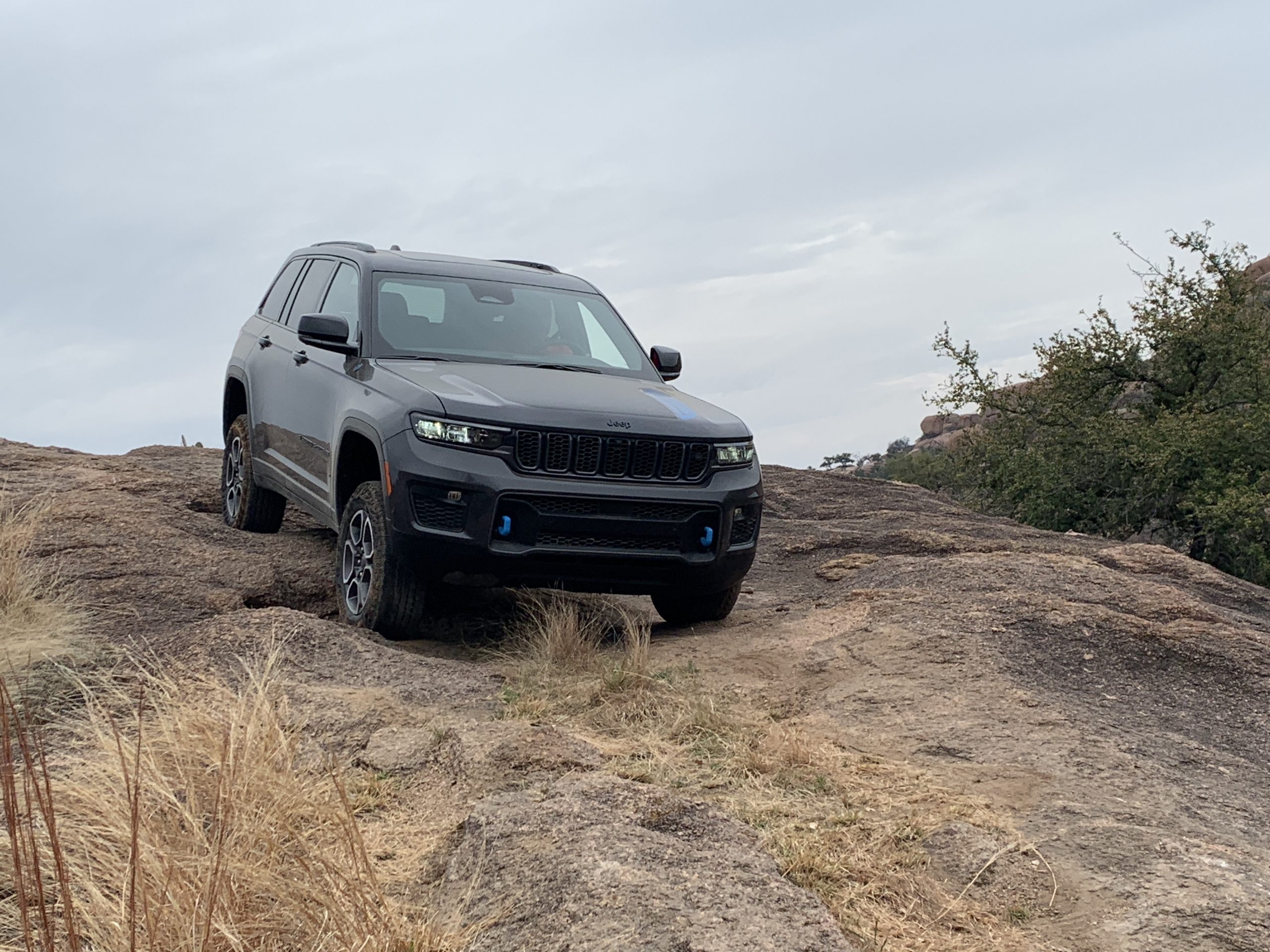 We’ve waxed at length about the new Grand Cherokee’s interior during other reviews, so we will limit our column inches by reiterating the fact that Jeep is taking its luxury aspirations very seriously. McIntosh audio equipment looks great and sounds even better, one can have up to a half-dozen 10-inch screens in this thing if you count the heads-up driver display, and the tactile sensation of real metal with patterned edges on items like the shifter knob make the interior feel expensive.

Pricing kicks off at $77,290 including destination, though the Trailhawk variant – with all its extra off-road tricks – is just $400 more. The white-hued on-road focused Summit trim shown in most of these images (which included exclusivities like quilted Nappa leather and 20-inch Pirelli Scorpion tires) checks in at a heady $89,190. 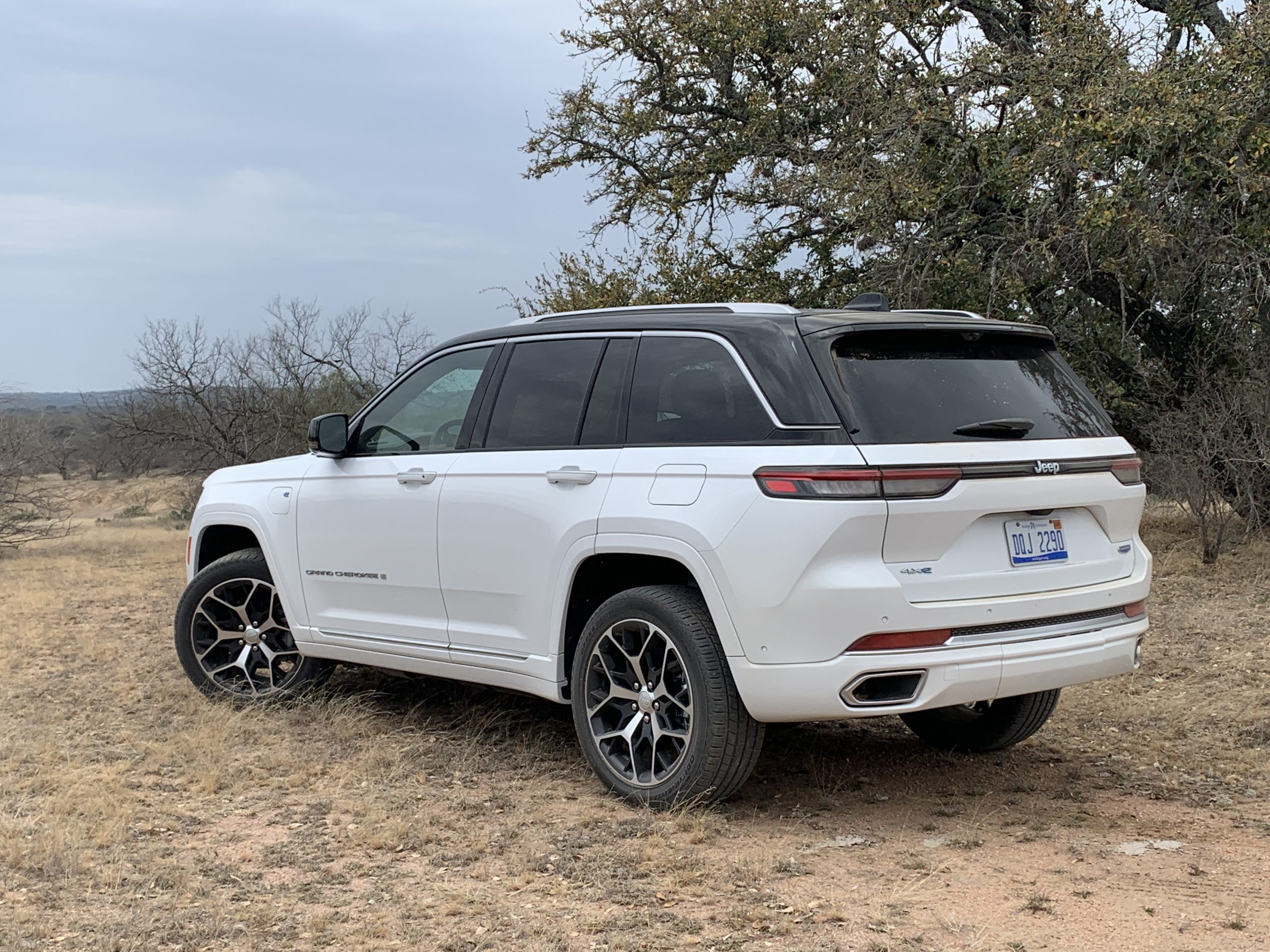 Do the numbers check out? The feds rate a Grand Cherokee 4xe at 10.0L/100km in mixed driving conditions, with the 40ish-kilometre all-electric siesta good for a nod at 4.3Le/100km. A similarly powered Hemi model will slurp up 14.1L/100km of fuel. Projections by NRCan suggest a 4xe will cost about $1,500 per year to feed while the Hemi could consume about $2,800 of your annual budget in gasoline. There is a premium of $7,255 for a Trailhawk 4xe compared to a Trailhawk Hemi for the 2022 model year, putting the breakeven point well within the length of most vehicle loans and even in with a shout of factory warranty.

Ability versus desire? The new Grand Cherokee 4xe manages to evoke more than a little of both.