Entry-level GV70 is just as good as its pricier siblings.

Join the Conversation (0)
The Genesis brand, still a sophomore in the grand scheme of things compared to established luxury players like Audi and Lexus, has been padding its showroom with different varieties of SUVs and crossovers –important segments for the financial health and bottom line of any car company. With the engineering might of established Korean players backing their efforts, Genesis is nipping at the heels of Lincoln and Infiniti in terms of sales in this country despite being far younger than either of those brands.

Playing in the brutally competitive midsize luxury crossover segment, the GV70 does a good job of using Genesis family identity cues to create a machine which you’re unlikely to lose in a sea of lookalike crossovers at the mall. The brand’s trademark two-line quad lamp styling starts up front with lights set at the same height as its maw of a grille, avoiding the current inexplicable trend deployed by some marques of placing a car’s headlamps in the jowls of the front bumper. A so-called parabolic line runs the length of the GV70, stretching from tip to tail and adding a bit of visual interest to what could otherwise be vast expanses of sheet metal. Razor-thin two-line tail lamps peer rearward. Your author would choose a hue other than white – check out the entertainingly named Mauna Red, for example. 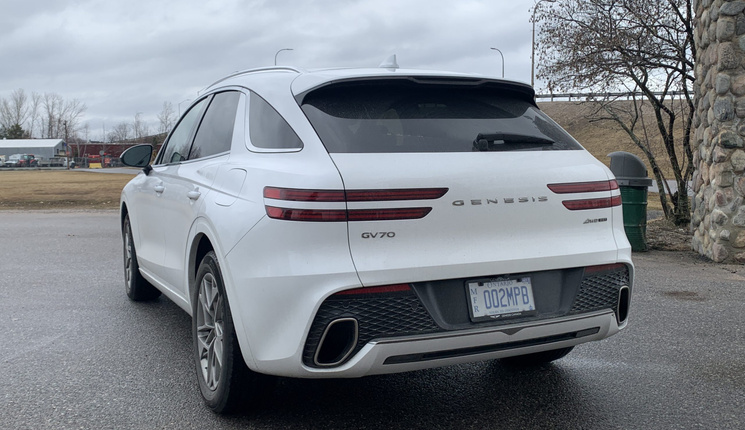 Under the hood of this model is the smaller of two engines offered in the G70. Displacing 2.5-litres from its four cylinders and wringing 300 hp from its turbocharged guts, the quad-pot plays nicely with its eight-speed automatic transmission dance partner and proved to be an able companion during a two-day scouting trip through the wilds of Northern Ontario. Highway speeds crept up on this driver like a silent butler, proving the worth of this model’s smart cruise control (fitted with a stop-and-go function for urbanite commuters). Despite being down 75 ponies compared to the V6 option, this four-banger never felt underpowered. All-wheel drive is standard in Canada on all GV70 trims.

But it’s the interior at which customers in this segment will spend most of their time staring, and Genesis is doing a great job of making its cabins feel a lot more expensive than their price tag may suggest. Excellent details like the stitching which tracks its way across the soft-touch dash, a swooping line of brightwork which runs up and over the gauges before seamlessly spearing though the ventilation registers and door cards, finely textured and knurled surfaces on important touch points like the redundant stereo controls – all these make for a cabin which can hold its own against established luxury brands. Your author remains unconvinced the two-spoke steering wheel looks like anything other than an oddity but that’s a personal preference. Any my spouse will gladly tell you I’m frequently wrong about nuanced interior design so I’m probably wrong about the wheel, too. 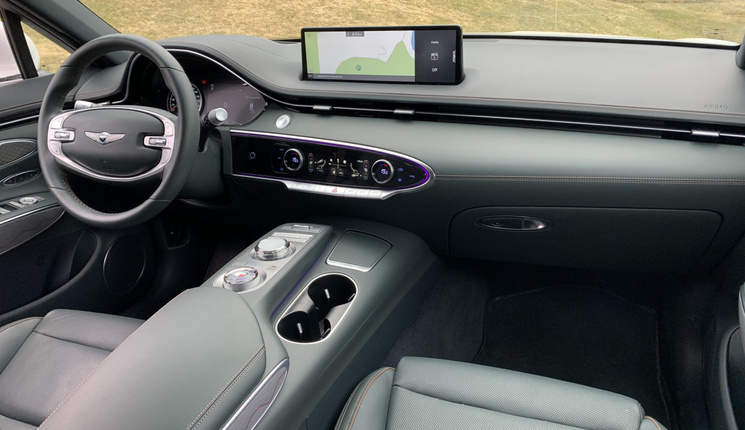 Like other cars with which it competes, the GV70’s HVAC system is controlled by a touchscreen, albeit one which is separate from the infotainment system and provides haptic feedback for common functions such as adjusting the fan speed. It isn’t quite as effective as a physical dial for permitting adjust-by-feel without taking one’s eyes off the road but it is light years ahead of having to dig through infuriating submenus in a jumbotron just to increase fan speed by two notches. Redundant controls live on the forward edge of GV70’s centre console for quick volume and XM channel adjustments, with a large round dial just south of those items intended for tactile use of the infotainment touchscreen should one be so inclined to use that input instead of their outstretched index finger.

Note well: this dial and the gearshift knob reside in proximity to each other and will be confused the first fourteen times you drive your snazzy new Genesis. The infotainment screen itself is oriented in a horizontal fashion and is less intrusive than “standing tall” tablets in some other vehicles. The graphics are crisp and clear.

One oddity? The mashup of analog dial and digital screens in this midrange GV70’s gauge cluster. Its left side has a dinner-plate speedometer with a coin-sized fuel gauge at the bottom of its sweep – a clean and very German design which was probably the intent. But at the centre right of this cluster are digital screens, the latter generally showing a tachometer but tossing up a view from the blind spot monitoring system when switching lanes. This is helpful but since only half the cluster is digital, camera images from both sides of the car show up in the same spot. This is jarring since other Genesis vehicles (and vehicles from its extended family) have digital screens on both cluster halves, permitting the blind spot camera to feed images on the left or right corresponding with the direction of turn. 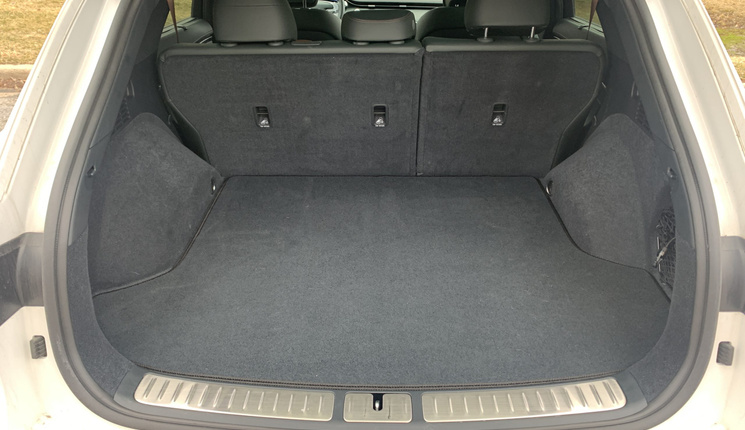 Front row legroom is ample as is space for the driver’s noggin, with back seat room found to be decently accommodating (keeping in mind this writer is six-and-a-half feet tall. Riders in the aft quarters are treated to their own HVAC controls, heated seats, and USB ports. The front passenger seat can be adjusted by the peanut gallery thanks to controls on its left flank – whether it gets moved by impish children or the Uber Lux passengers you’re carting downtown.

Buying advice? If one can suffer the indignity of doing without an 18-speaker audio system, surround view parking cameras, and a few other petty items, be sure to sample the entry-level GV70. It’s priced $4,000 less than our tester but retains the same powertrain and its amenities are legion. Perhaps sophomore year isn’t so bad after all.