The current S550 Ford Mustang screams its final battle cry before being replaced by a newer, younger, and more sophisticated pony car.

Join the Conversation (0)
The Ford Mustang is a sports car that needs little introduction. Its legacy harkens way back to the mid-1960s when it firmly cemented its position within post World War II Americana. The Mustang is as American as a steamy hot dog during a Yankees baseball game.

This is also why Ford will unveil the next-generation Mustang - code-named the S650 - at the most American of auto shows: Detroit. But before we get there, let’s look back at the current car and remember what Ford did well with that model and what the new car could potentially improve on.

The model tested is the iconic Mustang GT, the one powered by can equally symbolic 5.0-liter V8 or what many refer to as the five-o Mustang. It’s also the one several Mustang enthusiasts like to call the real Mustang due to the pulsating V8 engine that’s hiding underneath its hood. 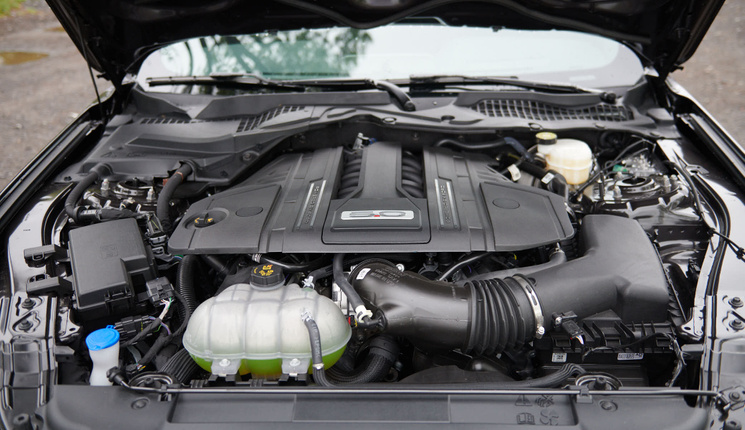 When the sixth-generation Ford Mustang was introduced in 2015, it was a clean sheet design, giving birth to a much more sophisticated machine than its predecessor. While the Mustangs that came before it were very much pony cars built mostly for straight-line acceleration, the S550 was officially a sports car, one that could finally be measured against the best sports coupes from a handling standpoint. That was all thanks to its first-ever fully independent rear suspension.

What’s more, this generation Mustang had finally let go of the retro-inspired styling of its predecessor, a trend that began in 2005 with much success, but by 2014, was beginning to appear overdone, as if Ford had overmilked that cow. 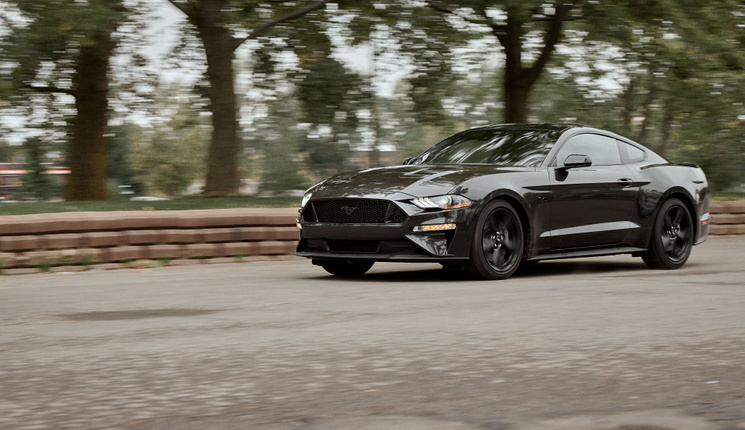 The current S550 – which will be phased out at the end of this year - has a much more distinguished design language, one that propelled the Mustang into the future while still firmly hanging onto its past.

Wide, bulging rear fenders, a sloping rear roofline, and the quintessential Mustang three-bar taillights all worked beautifully together to make up one of the most striking Mustangs in years. Seven years in, this design still feels fresh and totally in tune with what a modern pony car should look like.

While I still firmly believe that a Mustang GT is best appreciated with a manual transmission, I must say that Ford’s ten-speed automatic unit is rather stellar with this engine. I’ve said this before and I’ll say it again: this transmission operates better with larger displacement engines or massive low-end torque.

I say this, because in the four-cylinder EcoBoost Mustang, it’s not as polished, constantly hunting for gears, which is irritating. But with the V8, it simply disappears in the background when you’re casually driving the car around town. That’s precisely what you want from an automatic transmission. 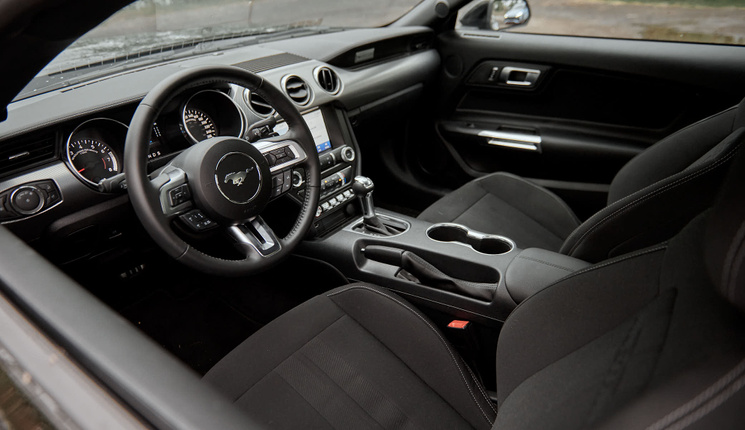 Set the Mustang GT in its Sport or even Track setting, and the transmission instantly drops a few gears and stays within the first six cogs for optimal driver involvement. The paddle shifters work well enough for manually doing things yourself, but this box is best enjoyed when left to do its own thing. It downshifts quickly and it’s quite good at handing you the right gear for the task at hand.

There’s something undeniably lovely about driving a V8-powered Mustang at night on a metropolitan highway or, even better, inside a tunnel. Montreal’s Ville-Marie Expressway, which crosses the downtown area underground, proved the perfect playground for my rambunctious coupe. You just never get bored of hearing the low-strung pig-iron symphony of Dearborn’s Coyote V8. The fact that my press unit was painted all black with black wheels only added to its already rebellious personality.

The Mustang is more a grand tourer than a precision-obsessed sports coupe, however. This means that while it puts the power down rather well and will claw its way through a corner without embarrassing itself, it remains a large and rather heavy machine, one that weighs in (with the V8) at a lofty 3,705 pounds. 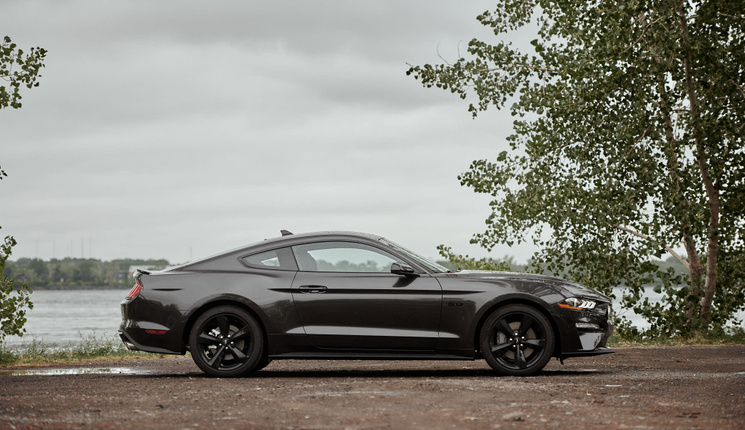 Add to that the fact that you’re sitting near the rear axle, looking ahead over a long, prominent hood, and the Mustang GT can be a handful for beginners. It requires a firm hand and that you don't baby it. Doing so will be highly rewarding and undoubtedly addictive. Lose your focus, and you’ll be the next Cars and Coffee star on TikTok.

In other words, one truly needs to commit if the goal is to drive the Mustang GT with haste, as the car’s wide rear is constantly wiggling, reminding you it must be respected for what it is.

The Mustang’s weight and 188-inch total length mean it’s a handful to control, but once you get your head around its dimensions, it shrinks underneath you. Within a matter of minutes, Ford’s legendary sports car makes you feel 10 years younger, has you wanting to do very wild things and motivates you to drive off into the distance, free as a bird. 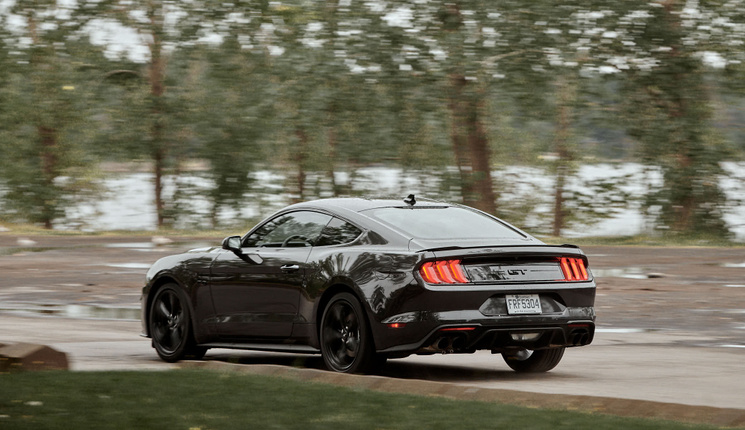 But all good things do come to an end, which is why Ford is already preparing the S550’s replacement. Rumors online say the Coyote V8 will not only stay within the lineup but will pump out around 500 horsepower. The EcoBoost four, on the other hand, could inherit a mild hybrid system and some rumors even speak of a drift mode. We’ll need to wait until the September 14th unveiling date for confirmation on that one.

We’re hoping Ford will improve the Mustang’s materials inside because these hard plastics are not ageing well. An updated infotainment system could also help this pony, perhaps Ford’s Sync 4 it also puts in the Bronco. What the new Mustang needs to keep, is styling that’s as equally charismatic and loaded with nostalgia as its predecessor. Because after all, the automotive landscape simply wouldn’t be the same if the Mustang became anything other than the thoroughbred it was destined to be.