The Ford Maverick marks the return of affordable compact trucks. But watch the options list because this little guy can quickly become expensive.

Join the Conversation (0)
The last time there was an affordable new truck on the market was 2011, when Ford and Mazda would liquidate their remaining inventory of base, four-cylinder Rangers and B2300s.

I remember seeing an ad for a brand-new Ford Ranger on the back page of my local newspaper. It started at $11,999 for a stripped out, two-wheel drive truck with a four-cylinder engine and a manual transmission.

Sadly, the days when someone could walk into a Ford dealership and leave with a compact truck for less than $20,000 are long gone. All trucks, including the “smaller” midsize models, sell well over $40,000 now. Affordable trucks no longer exist.

Luckily, Ford sees a potential to make a quick buck in that now empty segment. While it’s true that the Hyundai Santa Cruz is also a compact truck, its $40,955 base price isn’t exactly cheap. If Ford could find a way to undercut its Hyundai rival by several thousand dollars, it would own the cheap truck market. 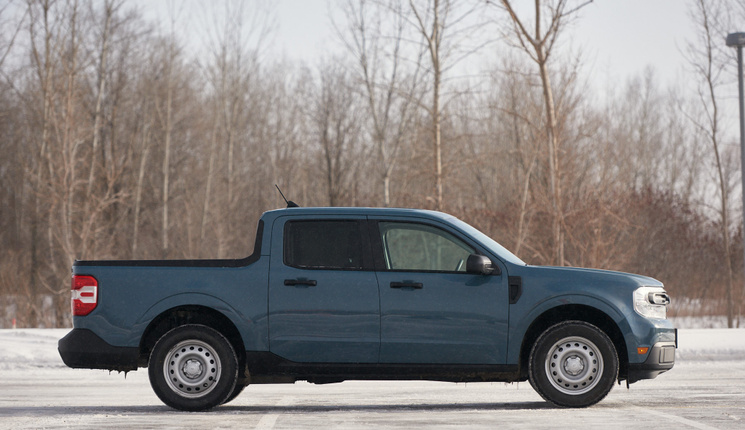 Hence the 2022 Ford Maverick. Yes, it’s a tiny unibody trucklet that’s based on a Ford Escape, or a Ford Focus if you live in Europe. And although it may not have the brawn to haul 7,000 pounds, it packs enough punch to be taken seriously by potential small truck buyers. The Maverick is also cheap. Dirt cheap. Base models kick off at $26,900 before freight.

Ok fine, we’re well above the $11,999 promise from 2011 but considering that you can buy a truck for about the same price as a Honda Civic in today’s market is quite a bargain.

At the heart of the Ford Maverick lies Ford’s C2 car-based architecture, meaning there’s no frame like a “real” truck. Its engine is also installed in a transverse layout. So, it’s first and foremost front-wheel drive. At this point, truck people are probably throwing their phones or computers screens out the window.

Interestingly enough, Ford packaged the Maverick to fit with truck buyers’ needs, with a towing rating that’ll reach a healthy 4,000 pounds when properly equipped and a payload that’s set at a robust 1,500 pounds. If you’re in the market for a light duty truck to haul mountain bikes, a small camper tailer and anything in between, the Maverick will do just fine.

It’s even available with a hybrid powerplant, a feature that should please many considering how expensive gas is. Base Mavericks get the Escape hybrid’s 2.5-liter four-cylinder. It’s good for 191 horsepower and 155 lb-ft of torque. That engine is mated to a continuously variable transmission (CVT) and only comes with front-wheel drive. 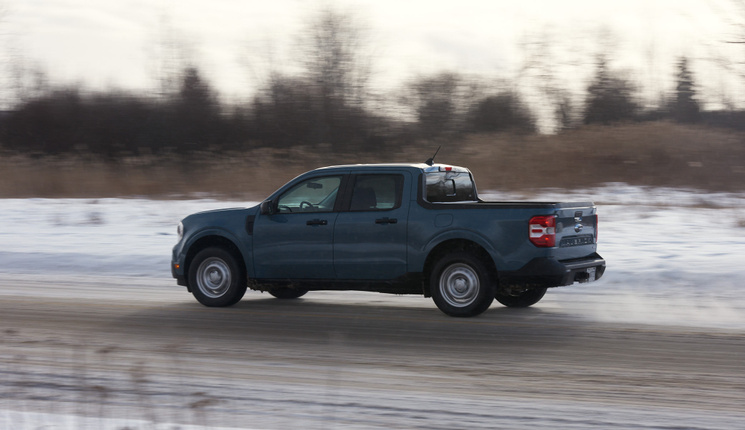 Our tester had the optional and frankly more potent turbocharged engine. While not a hybrid, that 2.0-liter four-cylinder churns out a more substantial 250 horsepower and 277 lb-ft of torque. It’s with this engine that you can achieve the 4,000-pound towing promise (the hybrid caps out at 2,000 pounds), as long as you don’t forget to tick off the $800 towing package. This engine is mated to an eight-speed automatic transmission and all-wheel drive comes standard.

The truck I was driving was, in my opinion, the best possible specification if your aim is to get the most amount of capability without breaking the bank. Our Maverick was a base XL model, complete with super cool “steelies” for wheels. The only options were that tow package, a bedliner ($560), some bed tie-downs ($500), Ford’s Co-Pilot360 driving aids ($750), a 400w inverter ($210), a manual rear sliding window ($220) and the turbocharged engine ($2,150). The final price was a reasonable $31,130

My only gripe with the base XL is that it’s missing basic amenities like cruise control, push button start and heated seats. You can only get those on the next trim level, the XLT. I was driving this thing February when it was 30 below. I could have used a pair of seat warmers.

One last point about the Maverick’s pricing: beware of the options list. We don’t recommend going over an XLT ($31,650 with 2.0T). Anything over that, like a Lariat, will knock at the door of $40,000. Don’t do it, because at that price, you’re in Ranger territory.

The fact that the Maverick is essentially a small car with a 4.5-foot bed makes it huge fun to drive. There’s a pleasant nimbleness in its handling that reminds us of a Ford Fiesta ST. Body roll is kept low thanks to its unibody structure, and there’s no unwanted wobbling that’s typical of a body on frame configuration. 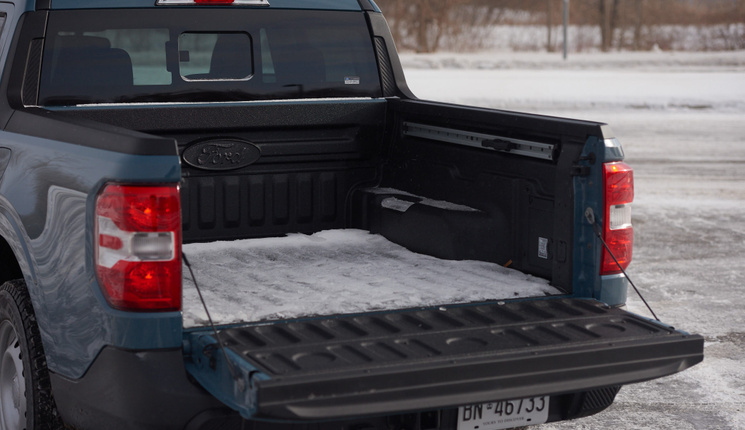 That being said, the Maverick’s short wheelbase and stiff dampers do lead to some unwanted bouncing on bumpy roads. Its handling leads more towards sportiness than overall comfort.

We had no complaints about the powertrain. That turbocharged mill sends linear power and torque to all four wheels, with an appreciable peppiness in the way it accelerates. The Maverick 2.0T is quick by any measure, and its automatic transmission knows how to exploit that power. Just don’t bother fiddling with the available drive modes. Setting a Maverick in Sport mode will only lead to unwanted thrashing from the engine with no actual differences in acceleration. 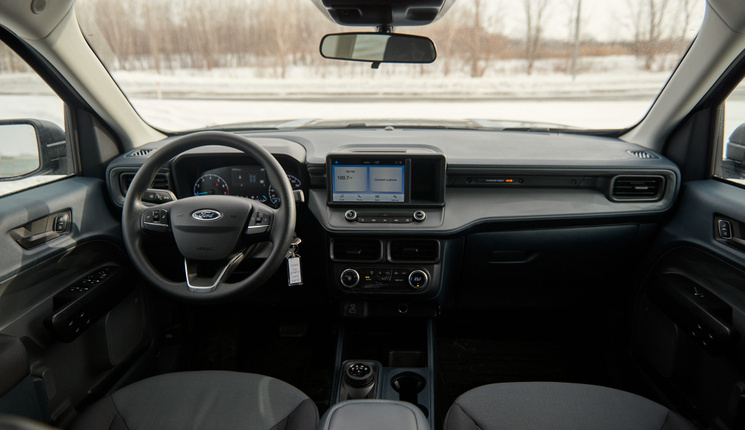 Inside, the Maverick boasts a funky design language with neat storage compartments located inside the doors and center console. Just like Honda with the Ridgeline, Ford allows you to lift the rear seat for added storage, with a secret compartment hidden underneath.

Overall ergonomics are above average in a Maverick, with clearly displayed readouts and a simplified version of Ford’s Sync 3 software (minus the voice commands) that’s compatible with wireless Android Auto and Apple CarPlay. Visibility is spot on all around, but those XL seats are hard and not really comfortable.

Rear leg and headroom is decent considering how tiny this thing is. The fact that passengers sit upright quells the otherwise cramped feeling. We recommend leaving the rear seat area for two passengers, however. The Maverick is too narrow for three.

Perhaps the only drawback is the Maverick’s low-rent build quality. Ford had to cut costs somewhere to keep the price low. So, expect to find some cheap plastics and awkward fit and finish in some areas, but it’s not to the point of being lamentable. Ford does camouflage these flaws with the Maverick’s youthful theme, with interesting motifs, color combinations and shapes scattered inside the doors and on the dashboard.

As a total package then, the Ford Maverick XL 2.0L is a wonderful little city truck. I found myself adoring its cheerful styling, spirited performance, and smart packaging. Add to that a price tag that won’t cost you an arm and a leg and fuel economy that averaged in the low tens during brutal winter weather, and it’s fair to say Ford has successfully given a second life to the cheap and simple compact truck.