Making a family hauler even easier to live with

Join the Conversation (0)
The 2022 Chevrolet Traverse RS, who doesn't love it when a vehicle has a good party trick. A little thing that's innovative and cool, and the trick is even better when it adds function to the vehicle. Think the first pickup with a rear door, or the Rolls-Royce umbrella holder in the door. The Chevrolet Traverse has one of my favourites with an infotainment screen that power-slides upward to reveal a handy storage bin. For 2022, Chevrolet has updated the Traverse, but while the automaker has freshened up the exterior and expanded the availability of some key tech features, that screen is still as cool and as useful as ever. 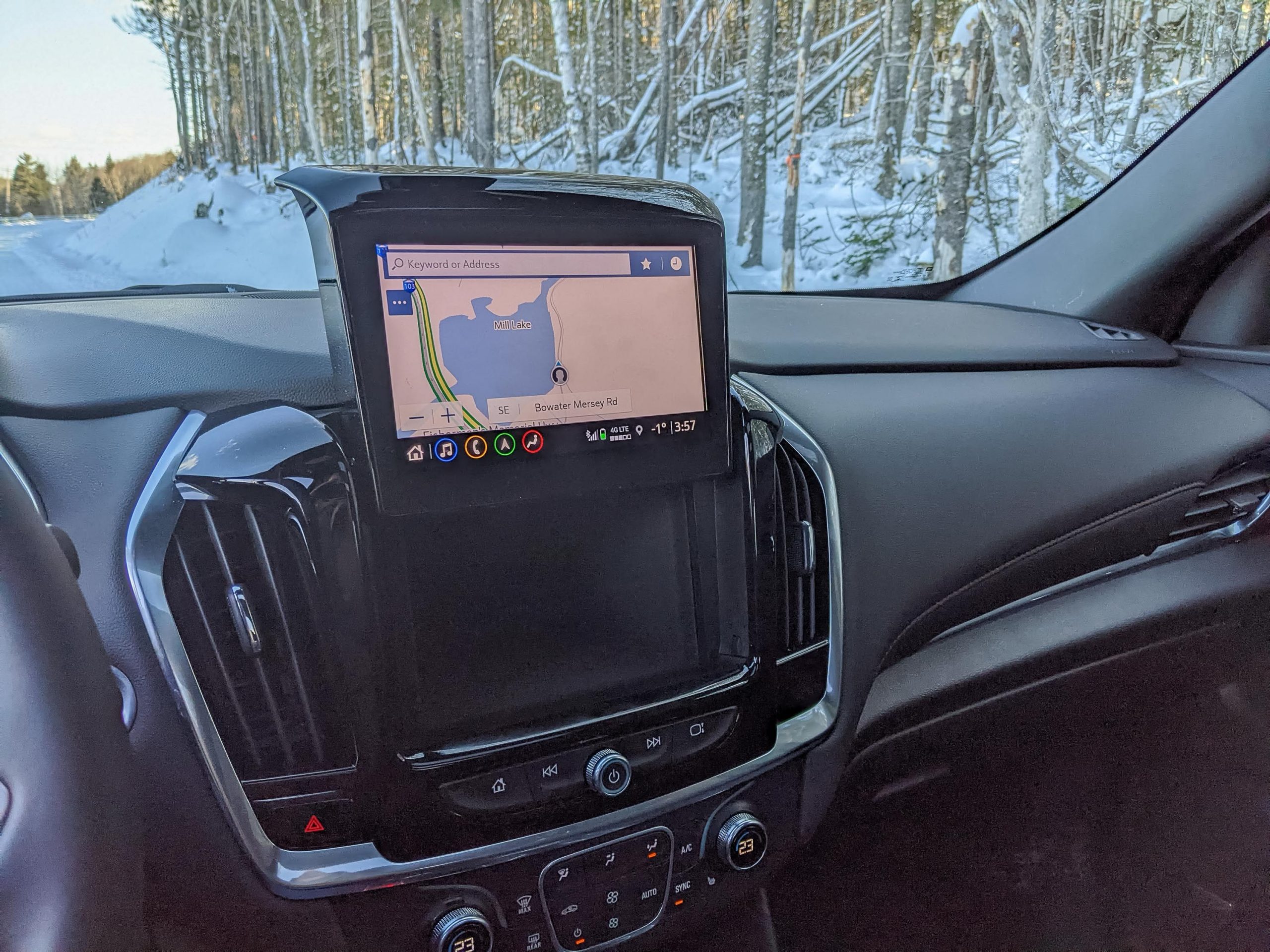 Chevrolet's styling changes on the outside are subtle but do freshen the look of the Traverse slightly. The grille gains a little more aggression (so do the running and taillights), and, usefully, the headlights are now LED units as standard.

Safety Assist is now standard across the line, including automatic emergency braking, front pedestrian detection and braking, forward collision alert, automatic high beams, and lane-keeping assist. Adaptive cruise is now standard on more trims as well, including my tester, an RS grade which wouldn't have gotten the highway helper previously.

Thanks to the supply chain issues surrounding the pandemic, some 2022 Traverse models are missing some features. On my tester, the heated seat buttons sat there with no purpose and the build sheet listed a $50 credit for no rear parking sensors (the seats are also a $50 credit). While other automakers are stopping production completely over chip shortages, this is an innovative solution from GM.

The plan is that, when the availability of microchips improves, you'll be able to get the features retrofitted at the dealer for no charge and everything will work just fine. With used vehicle prices through the roof and new cars sold weeks or more before they arrive, this is a good decision even if it means your first winter is a bit chillier.

Traverse is offered with just one engine, but it's a solid choice for this vehicle. A 310 hp 3.6-litre V6 that GM uses across much of the lineup, including in some of its performance cars. Though it lives in a three-row crossover, it doesn't feel like a truck engine. Instead, the V6 pulls satisfyingly toward redline, while the nine-speed automatic is happy to let it run to its rev limit before shifting gears. The combo is rated at 13.6 L/100 km city, 9.6 highway, and I saw mid 11s in largely city driving with snow tires and some heavy snowfalls.

The pleasant engine made the automatic transmission a bit of a drag. In this tester, it had an odd habit of holding gears at times when high r.p.m. didn't make sense and making the occasional sluggish downshift when I wanted something more abrupt. I will say that I haven't experienced this in other vehicles with this same driveline, including older Traverse models, so it may have been an issue specific to this unit rather than a 2022 programming change.

No three-row mainstream crossover is ever going to be "fun" to drive, but this engine makes the acceleration part of the drive much more enjoyable. The pull is accompanied by a startling amount of torque steer for a vehicle this large, especially if you're on the gas and changing lanes - like you would when passing slower traffic. Tap the AWD button a few seconds ahead of a quick pass and you'll quell the steering's tug, just remember to switch it back off after. 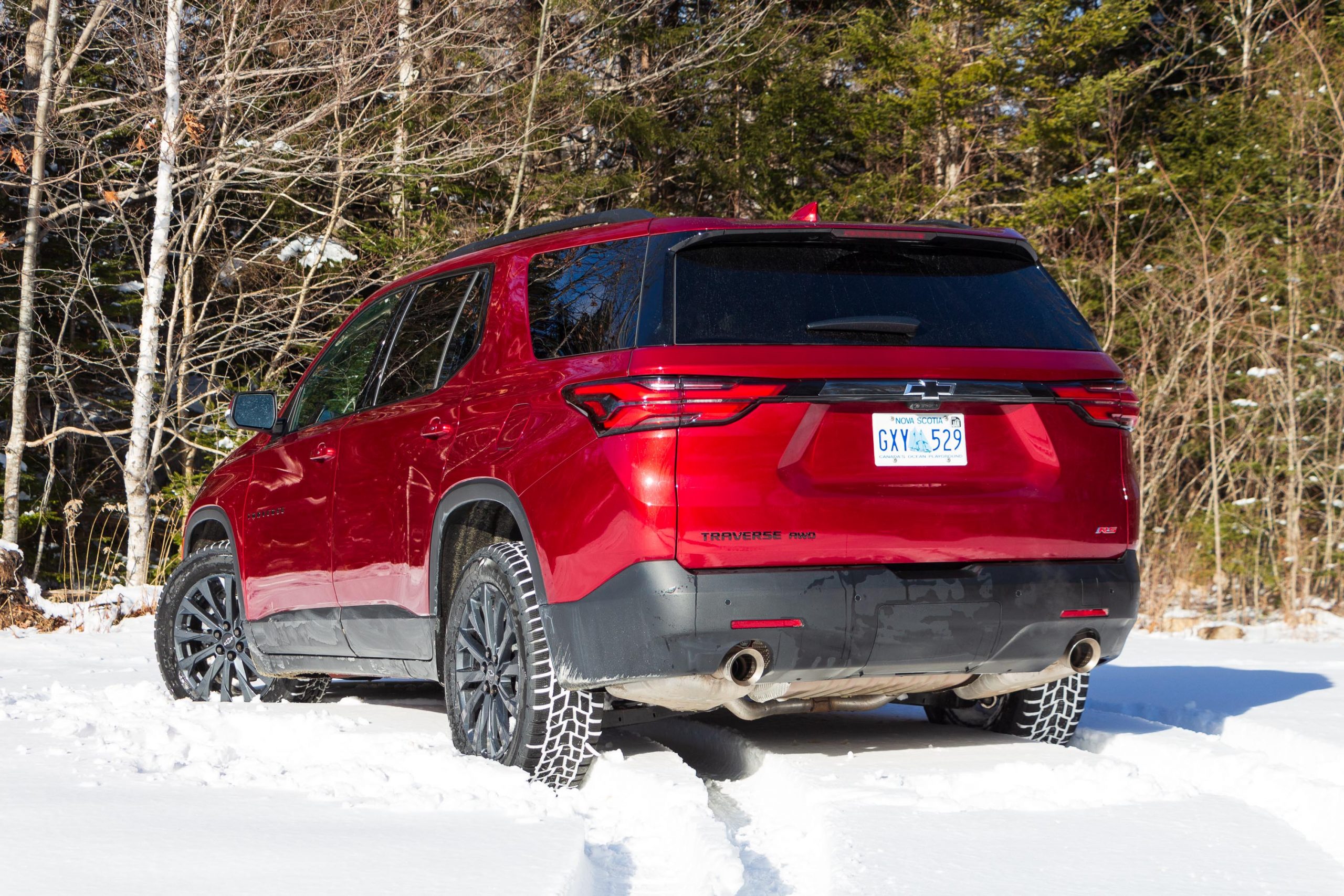 It's never going to be a sports car, but ride quality impresses for a vehicle of this size. Drive over the worst that winter roads have to offer, and you'll experience little more than a thump from the wheels thanks to a very stiff chassis and a well-put-together interior. Three-row vehicles tend to make a tremendous racket over even smaller bumps thanks to their massive cabins packed with so much plastic and so many moving seats. In stark contrast, I heard not even a squeak from the rear of this 2022 Chevrolet Traverse RS.

It's pleasantly quiet on the highway, too. Part of that goes to what must be an extensive amount of sound deadening material as well as standard active noise cancellation through the audio system, but I'll also credit some to the small sunroofs. The massive panoramic roofs found in so many crossovers let in loads of light, but they also let in lots of noise. Two smaller panels will let in plenty of light but less noise.

All Traverses get an 8.0-inch touchscreen with that sliding panel and hidden compartment, and both wireless Apple CarPlay and Android Auto are standard across the board. LT and up get wireless phone charging, too, a feature often limited to top trims. Upper spec Traverse models get built-in navigation on the same-size screen, though while GM offers an excellent system, we expect most buyers will use their wirelessly connected phones for navigation assistance.

Plenty of crossovers today come with three rows of seats, with even some compact models stuffing in the extra row. If you plan on actually using those seats, Traverse is one of the best. With enough head and knee room even for this six-foot-three driver. Yes, I'd be comfortable in the third row for trips of at least an hour or two, though not with the three passengers Chevy expects you to put there. More importantly, it's one of the easiest for climbing in and out thanks to generous movement of the second-row seats and the tall cabin.

The tall cabin means plenty of space for anyone in the front seats, while a low dashboard improves visibility even for shorter drivers.

Without passengers, the 2022 Chevrolet Traverse RS offers 2,781 litres of max cargo space. The best-in-class figure is as much as you'll get without moving to something with a frame like a Suburban, and with all seats in use there is still room for 651 litres of stuff. It's a big and almost square box with plenty of cubby space and even more cupholders. 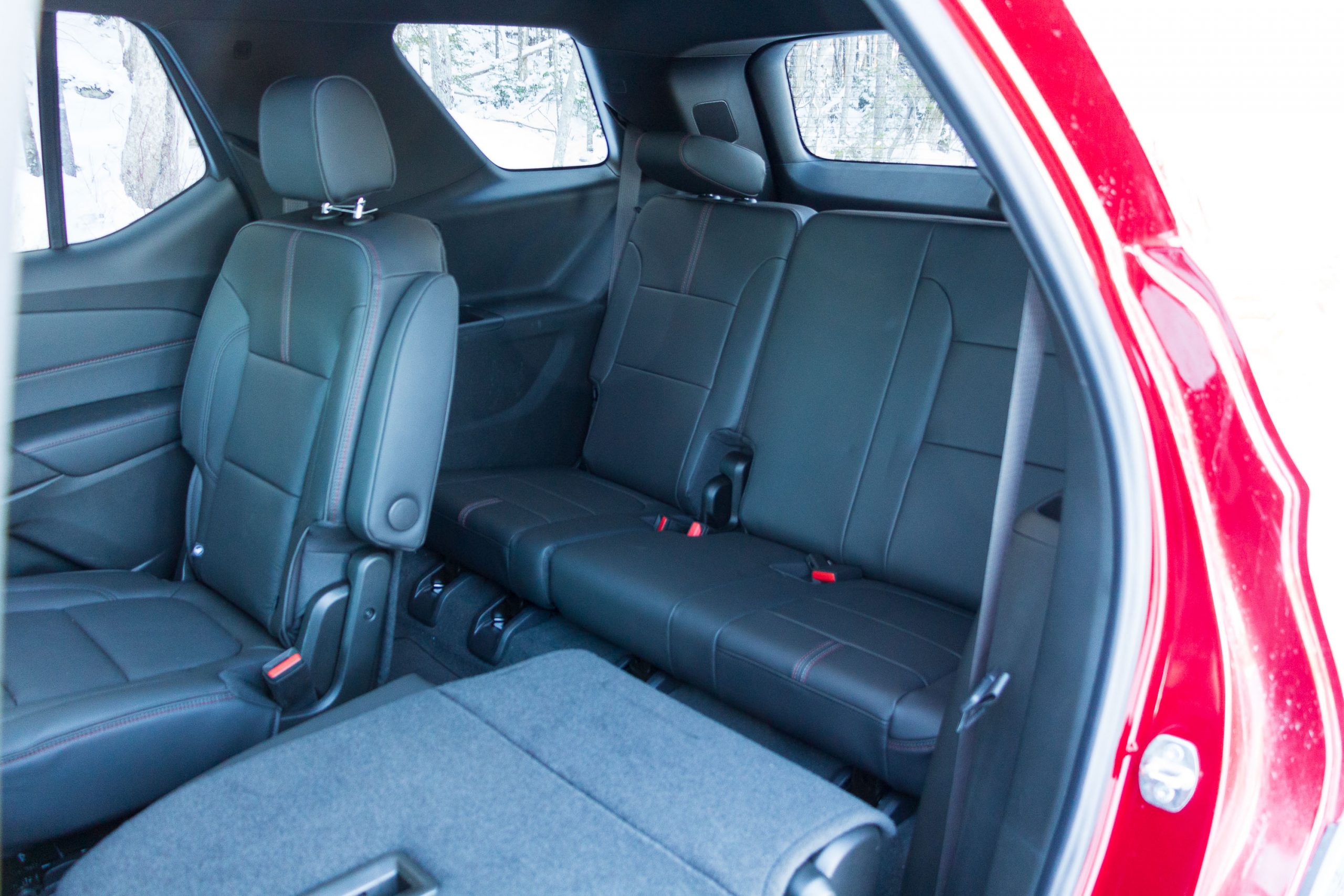 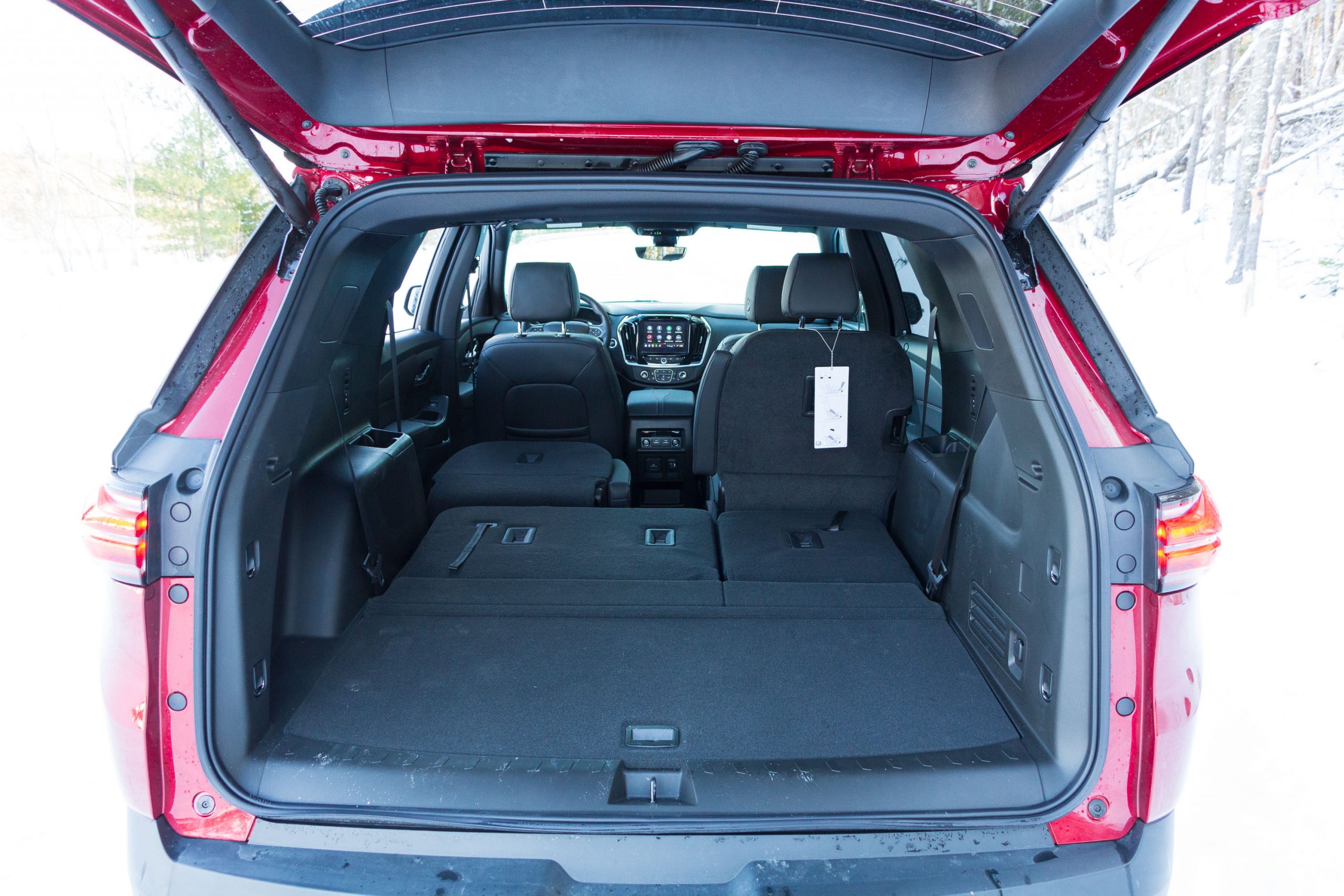 The controls will be familiar to anyone who has driven a Chevrolet, Buick, or GMC launched since around 2015, and for someone who jumps from car to car on a near-weekly basis, the layout is one of the best. Buttons are easy to find, they're large, and they're well-marked. To borrow a tired automotive cliché, the controls fall close at hand.

Now for the real reason I love the Traverse's motorized screen so much: For a very tall driver, a low dash means a low screen, and eyes off of the road when you need to check the map or the radio. Chevrolet lets you leave the screen in the raised mode while you drive, putting it high up and in my eye-line. Was it intentional? I'll never know. Does it make the vehicle better for a wider range of drivers? Absolutely.

Chevrolet's changes to the Traverse crossover for 2022 are aimed at making it a little bit easier to use and to let you get the good features without shelling out for the top trims. They make what was already an excellent way to transport a large family a little bit easier to live with. Just don't tell the kids where you stashed the good snacks.