Chevy Camaro sales aren’t doing well compared to its two main rivals, an irony given how exquisite the car is when wearing the 1LE package.

Article was updated 12 days ago

Join the Conversation (0)
In 2021, Chevrolet sold 21,893 Camaros in the US and just under 1,200 of them in Canada. These may seem like acceptable numbers for a two-door sports coupe in a world of electric cars and SUVs.

But when comparing the Camaro’s sales to its two main competitors, the Ford Mustang (56,607 sold in total) and the Dodge Challenger (55,788 sold), it appears the Camaro isn’t the first choice for North American consumers. Why is that?

I spent an entire week with Chevy’s iconic sports car in its SS trim with the 1LE package in quest of some answers.

Too Many Engineers, not Enough Dreamers

Perhaps this Camaro’s nomenclature has something to do with its unpopularity. Camaro SS 1LE doesn’t sound quite as sexy as Mustang Mach 1 or Challenger Scat Pack 392, the two cars this Chevy was designed to compete against.

And then there’s the styling. I personally detest what Chevrolet has done to what was once an elegantly styled coupe. This is essentially the same design as when Chevrolet rebooted the nameplate back in 2010. And that was a properly good-looking car. It was a proper throwback to the Camaro’s golden years, the late 1960s. 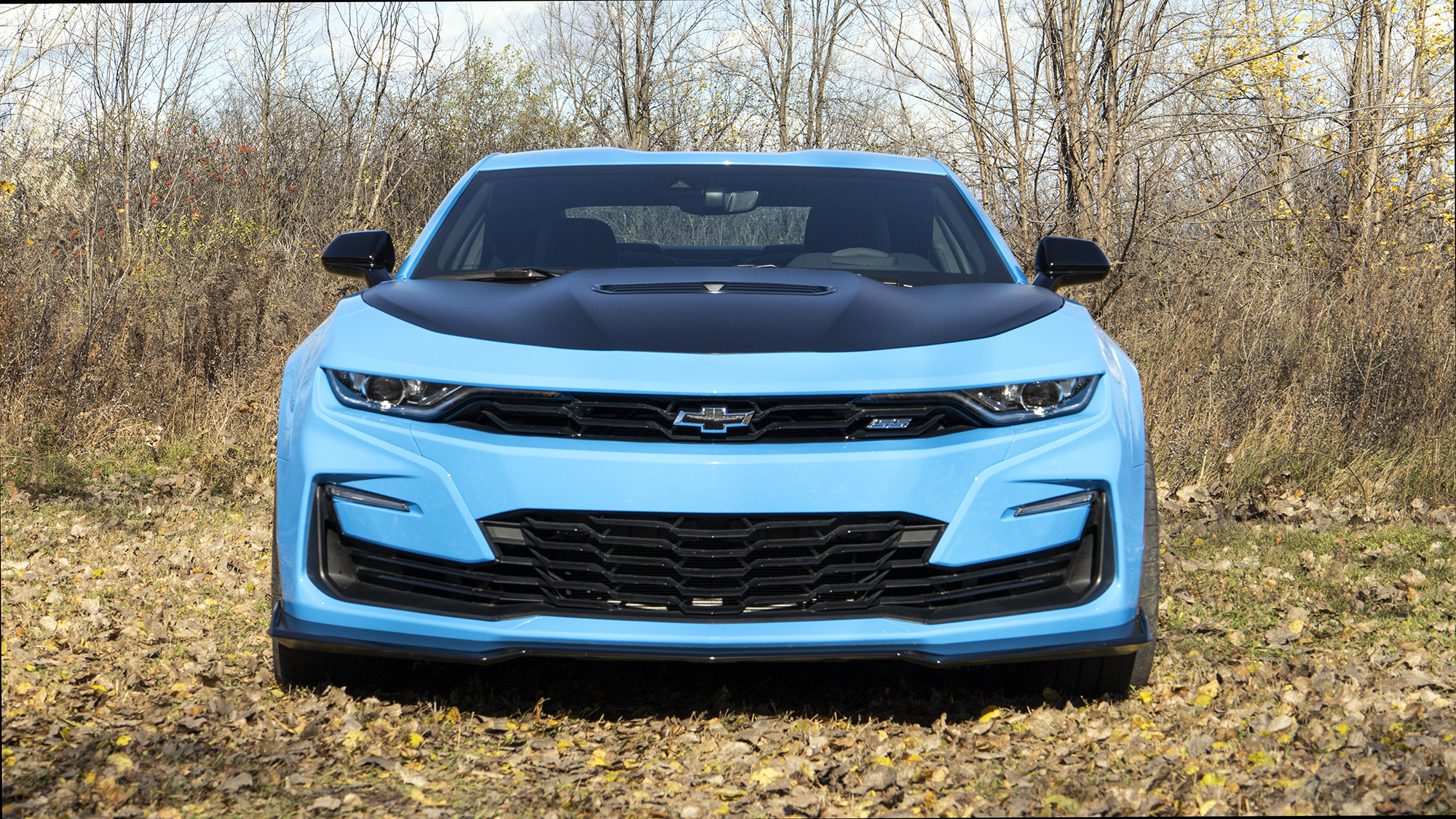 The problem with the design now is that Chevrolet has attempted to facelift it, but totally failed at giving it any form of substance. It’s clumsy and doesn’t work. That front fascia is now squeezed, stretched, and filled with intersecting lines that simply don’t coordinate well with the car’s overall shape. The car also has an awkward flattened smile somehow. It just looks goofy.

So, from a buyer’s standpoint, I can understand why the Camaro wouldn’t be as appealing as a Challenger or a Mustang. Chevrolet will tell you that the SS 1LE is a track-focused beast, and the lineup of go-fast parts that come with the package (more on that later) is indeed impressive.

But from a marketing standpoint, it’s almost as if Chevy isn’t even trying to sell the car. There’s nothing about the Camaro’s initial presentation that raises the hair on your forearms. It doesn’t create a sense of occasion nor nostalgia when seeing one. It’s a just sports car. A sports car with a bunch of letters and numbers attached to it; an engineer’s wet dream. 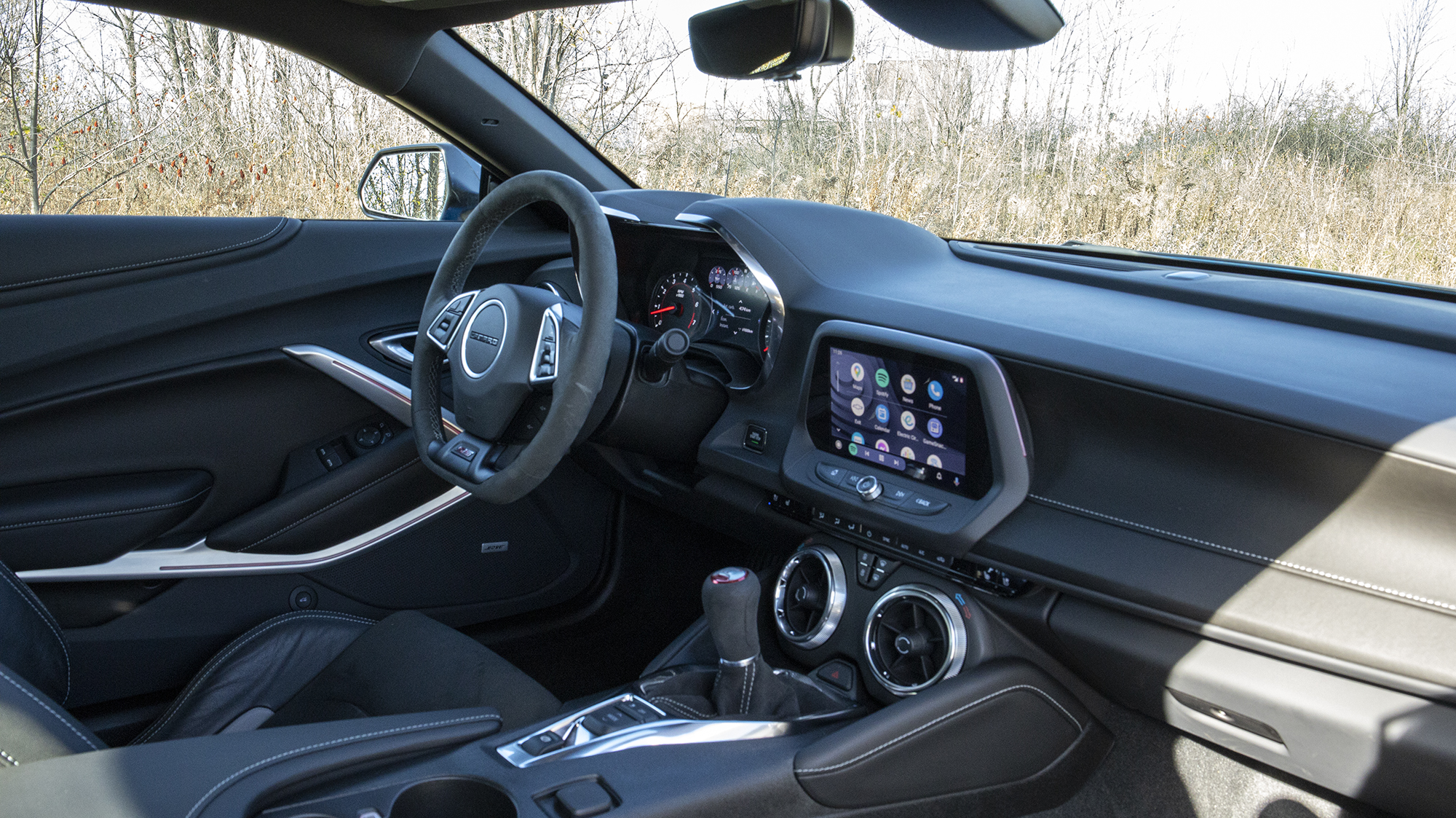 And don’t get me started on its plastic-tastic interior, awful ergonomics, its infotainment system that’s angled towards the ground so it’s hard to see in the sunlight, its total lack of storage space, and its overall claustrophobic experience.

The Most Capable American Sports Car

All of that is a big shame, because from a technical standpoint, the Camaro SS 1LE is hands down the most capable to have ever worn the name. I’ll even add that at $61,038, not many sports coupes currently on sale offer you this amount of performance. This thing punches way above its weight class. 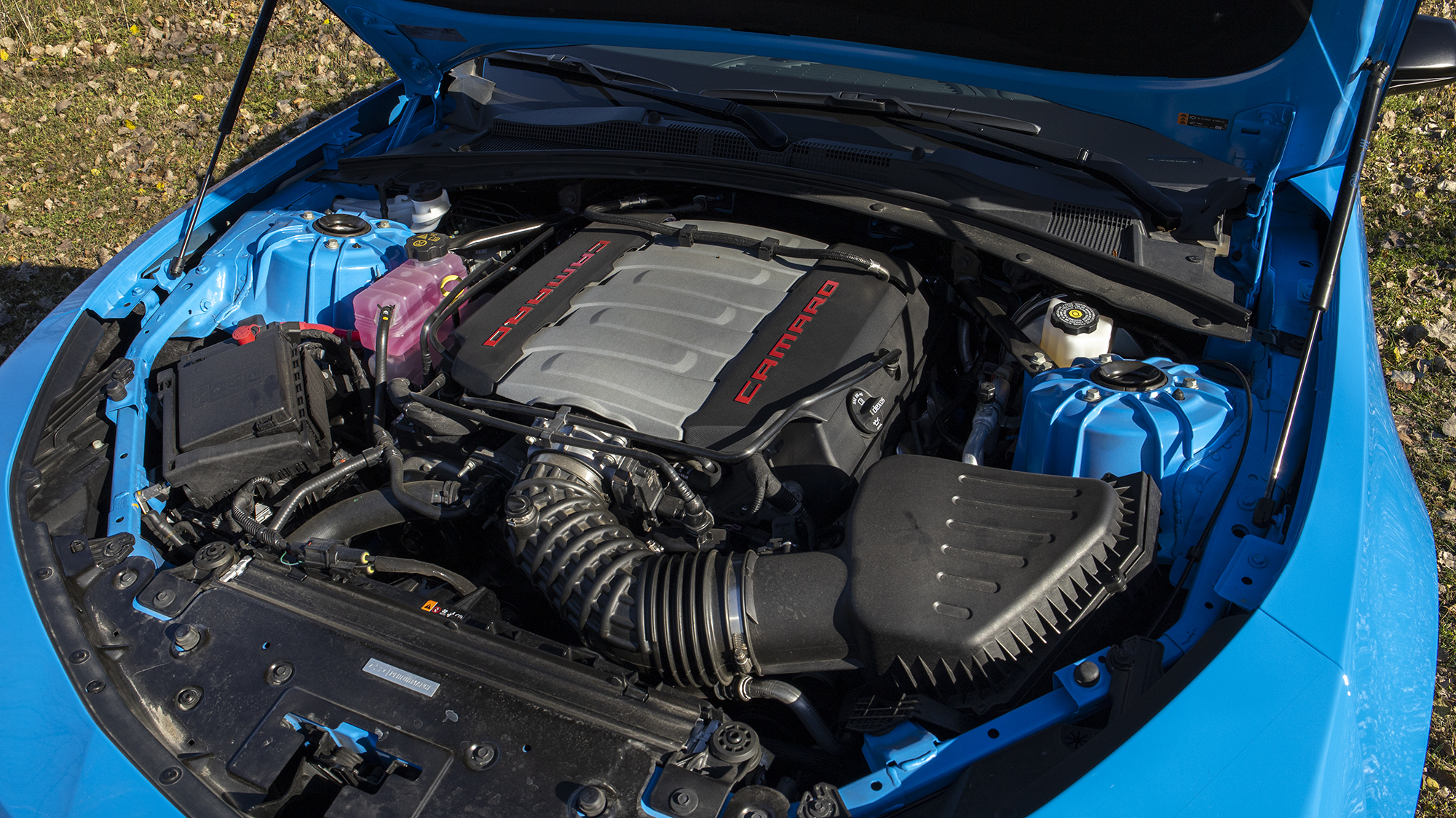 If you’re technical, like me, and can deal with an ugly car if it delivers from the driver’s seat, then you’ll appreciate what GM has done here. From the get-go, the Camaro SS is powered by the General’s ubiquitous 6.2-liter pushrod V8. It’s good here for a stout 455 horsepower and equally robust 455 lb-ft of torque. That engine sends the power to the rear wheels through either a ten-speed automatic transmission or, in my case, a six-speed manual setup. I personally wouldn’t have a Camaro SS equipped otherwise.

Another interesting fact about the current-generation Camaro is that it rides on a very good platform. It’s GM’s Alpha architecture, which also underpins the superhero sedan Cadillac CT5-V Blackwing, as well as its little sister, the equally sublime CT4-V Blackwing. The Alpha platform also underpinned the previous ATS and CTS-V. It boasts 50/50 weight distribution, which is an excellent place to be when your goal is to build a proper sports car.

But it’s really the 1LE package that allows this Camaro SS to stand taller than its main rivals. It costs $8,495 and, honestly, it’s worth every penny. 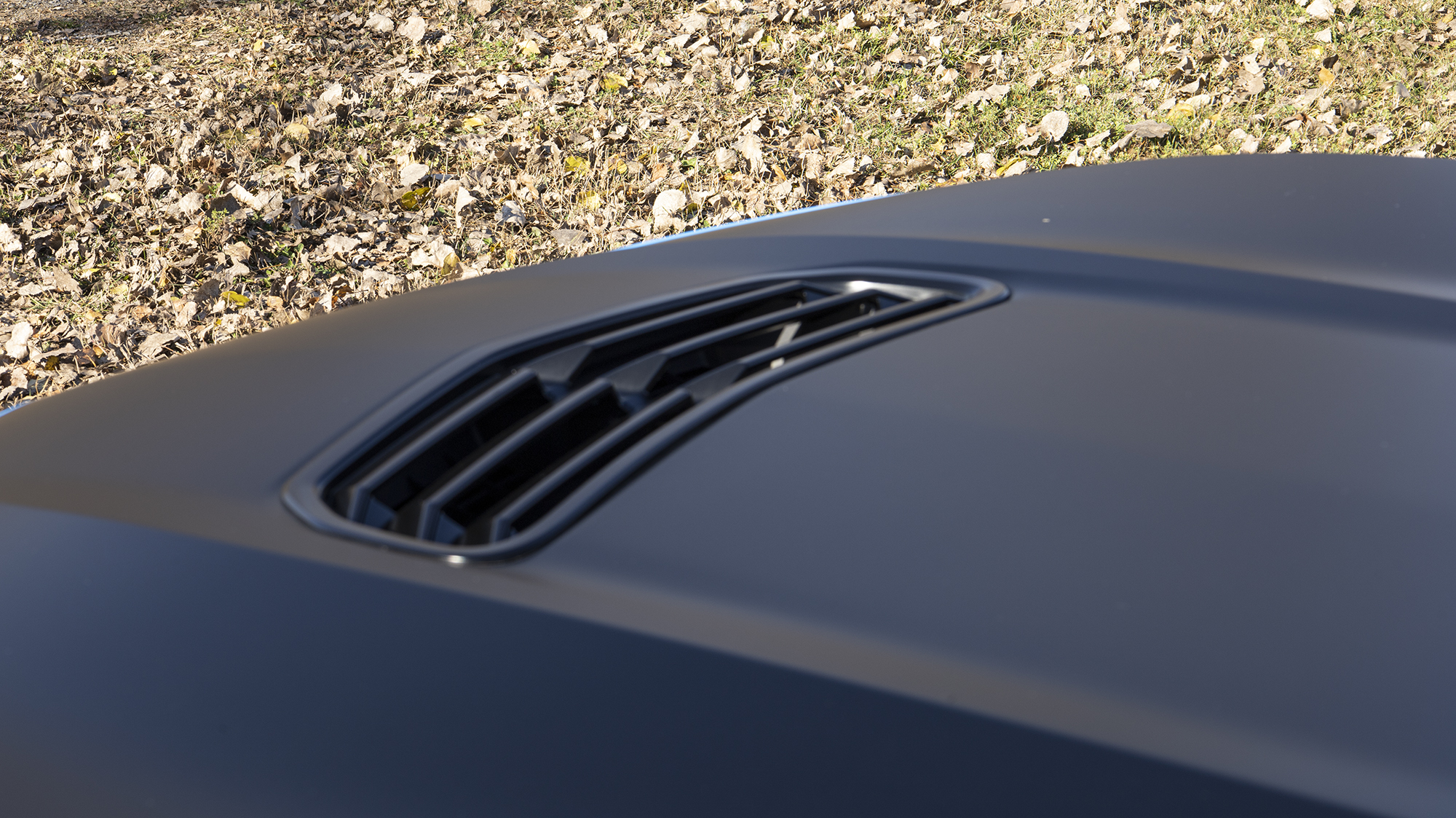 Aesthetically, you recognize a Camaro 1LE from its blacked-out hood with air inlet, front lip spoiler, 20-inch wheels and decklid spoiler. You then get a full roaster of mechanical goodies, things like an electronic limited slip differential, Magneride adjustable dampers, Brembo brakes with 6-piston calipers up front and 4-piston at the rear, Goodyear Eagle F1 Supercar 3 performance tires and Recaro sports bucket seats. And boy do these parts all come together when putting the Camaro SS 1LE through its paces.

Of course, to properly understand a Camaro SS 1LE, one needs to bring it out on a racetrack, something I didn’t have at my disposal. I did, however, enjoy some proper back-road motoring with it during the time I had it and my gosh was it an exhilarating experience.

The moment you fire up the Camaro’s massive V8 engine, it immediately tells you it means business. Its dual exhaust pipes spit out properly American decibels, but never too loud to get on your nerves. As a matter of fact, the Camaro’s exhaust system is rather clever as it only truly starts screaming when you really commit and put the hammer down.

Putting the hammer down is something you’ll want to do often in this car as the thrills provided by its lump of a V8 are highly addictive. This engine is basically a tower of power and torque, delivering at any RPM and at any speed. 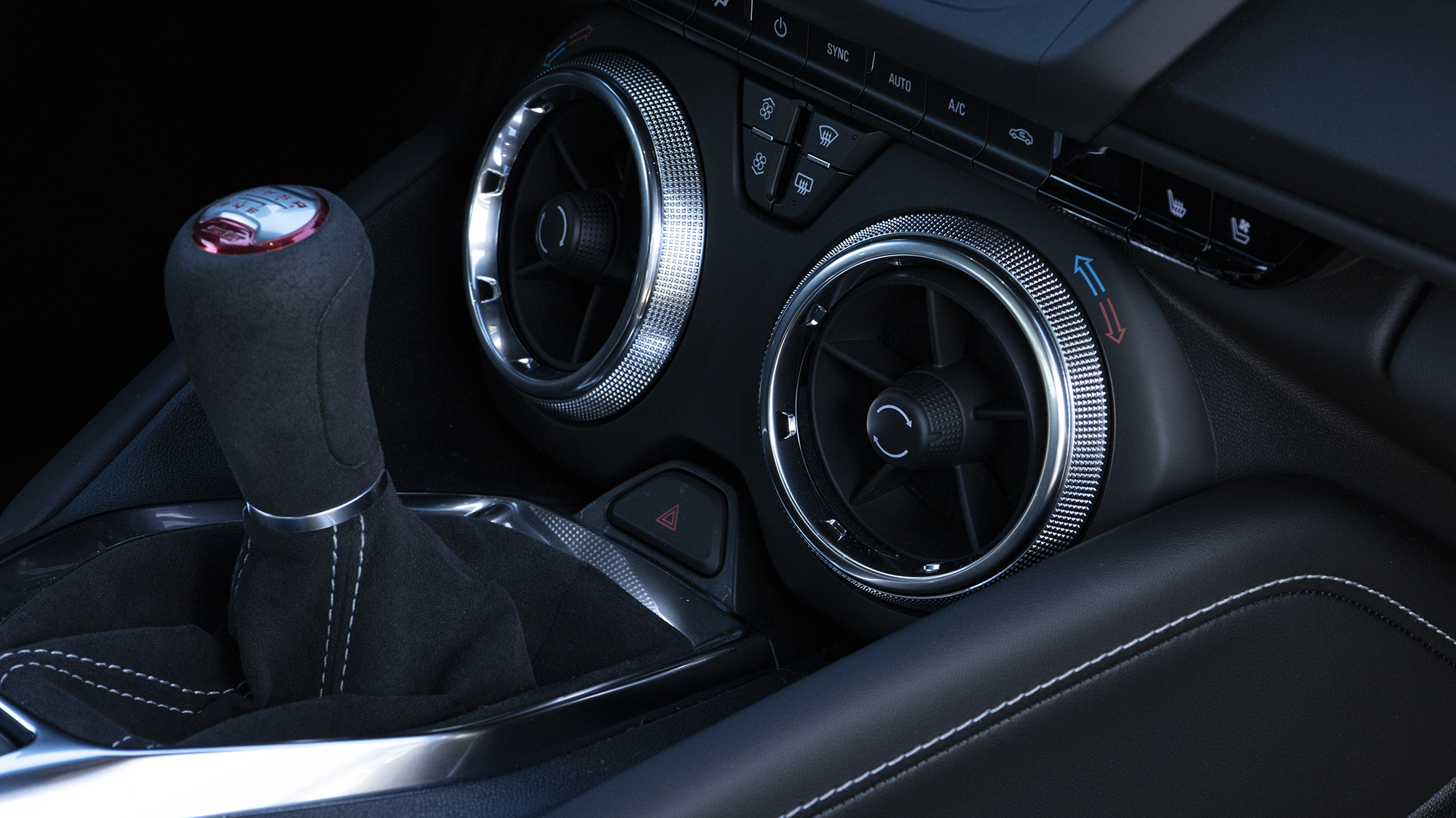 Drop the heavy clutch, slip the precise manual transmission into another gear, and the Camaro lunges forward as if it’s been working out for this event for months and finally let loose. And, my oh my, does it sound glorious during the process.

Out there on the open road, the 1LE package flexes its muscles by way of immense grip, a rear end that’s always controllable and dampers that constantly know how to set themselves up for the surface. It all works in absolute harmony to create a precise, fluid and adrenaline-packed driving experience. Next to the Camaro SS 1LE, the Ford Mustang and the Dodge Challenger feel like oxcarts. 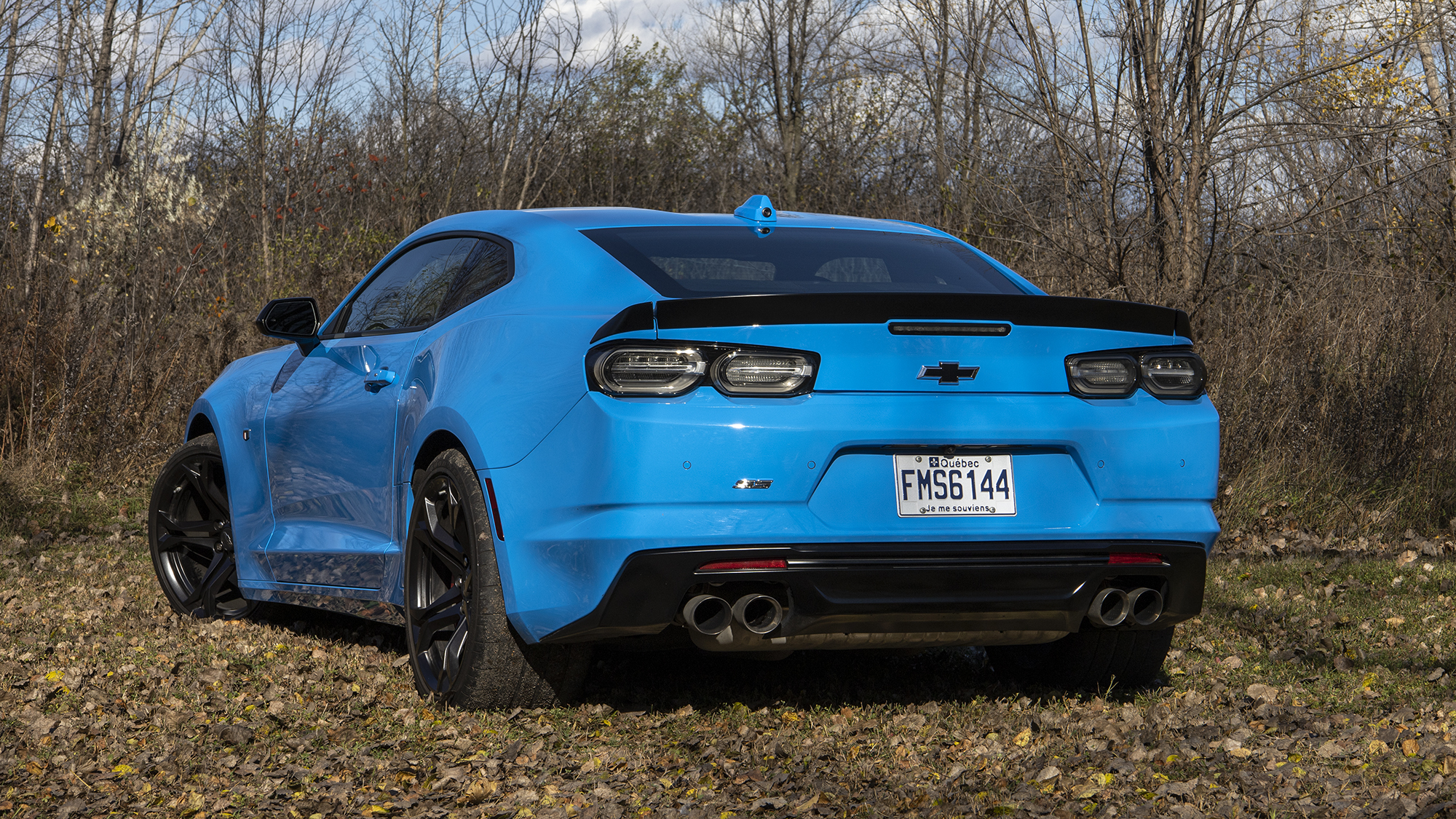 Perhaps what shines through the most from how this car drives is that GM now masters the art of calibrating chassis and suspension systems. You’d expect this Camaro to be a handful to drive due to so much power going towards the rear wheels, but it’s not. This is as easy to drive as a Honda Civic, even when you’re going ten-tenths with it. And that adds confidence. The kind of confidence that could have you dogfighting a BMW M4 or even a Porsche Cayman GT4 at your local track event. It’s that good.

If your priority is to obtain the most amount of sports car for your hard-earned dollar, then it’s honestly hard to do better than the 2022 Chevrolet Camaro SS 1LE, as long as you’re willing to live with its strange looks and compromised interior. If you’re interested in this this car, I say hurry up as the Camaro as we know it is not long for this world. I wouldn’t be surprised if Chevrolet killed it in the next two years or so. Rumors say the next Camaro will be an electric SUV. And that’s just sad.