While some carmakers are lagging in producing an affordable electric vehicle, the charming little Chevrolet Bolt has been showing them all how to do it for 6 years now.

Join the Conversation (1)
It’s honestly too bad that the Chevrolet Bolt EV was hit hard with a safety recall targeting its battery. For over a year, Chevrolet stopped production and sales of its popular electric runabout due to a risk of batteries catching fire while charging. And the worst part is, none of it was GM’s fault, but rather its battery supplier, LG Chem. The problem even stretched over to the Hyundai Kona Electric.

I say this because, from a reliability standpoint, the humble Bolt EV was on a solid streak if it hadn’t been for that dreaded recall. Ask Bolt owners what they think of their car, and chances are they’ll tell you they absolutely love it.

As a matter of fact, stories of Bolts stacking well over 300,000 km on their original battery with very few repairs are frequent.

GM has since worked out the battery problems and the lovely Bolt is finally back in production. This finally allows me to sample the midcycle update Chevrolet gave the car for the 2022 model year. I was literally on my way to the Chevrolet press office to book the Bolt EV press car last year when I received a phone call from my local spokesperson telling me that the cars would be grounded until further notice. A year later, I can finally take one of my favorite electric cars out for another spin.

New Face and a Much-Needed Interior

The update mostly affects the Bolt’s design, interior, and technology. The new car looks a lot more futuristic than before. It does look frankly cool if it wasn’t for its narrow, upright stance. The Bolt was always meant to be an urban sub-compact, and it's still very much that. 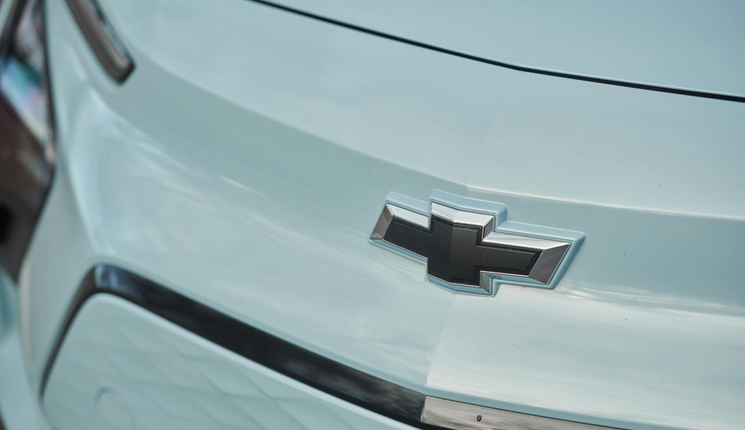 But it’s inside that this EV makes huge improvements. The old Bolt was plagued with a plastic-tastic interior, hard uncomfortable seats, and not much in the way of equipment. Chevrolet addressed this by completely overhauling the dashboard design, but also by including better materials. It all looks a lot more upscale and mature now. The 10.2-inch infotainment screen is the same size as before, but it features an updated interface that’s now quicker to react, easier to operate, and more in tune with today’s connectivity realities. 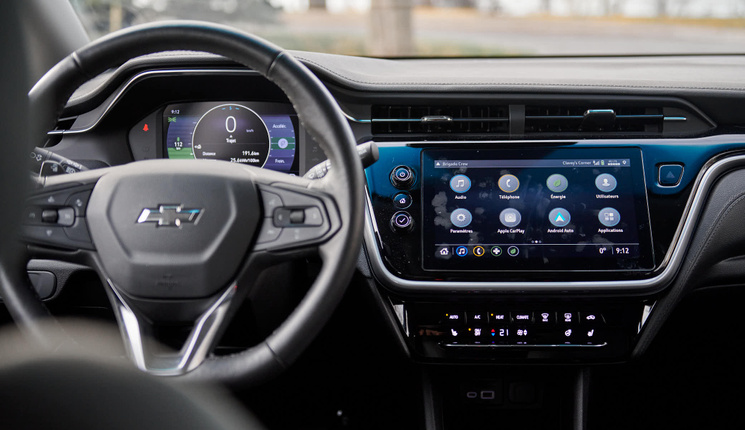 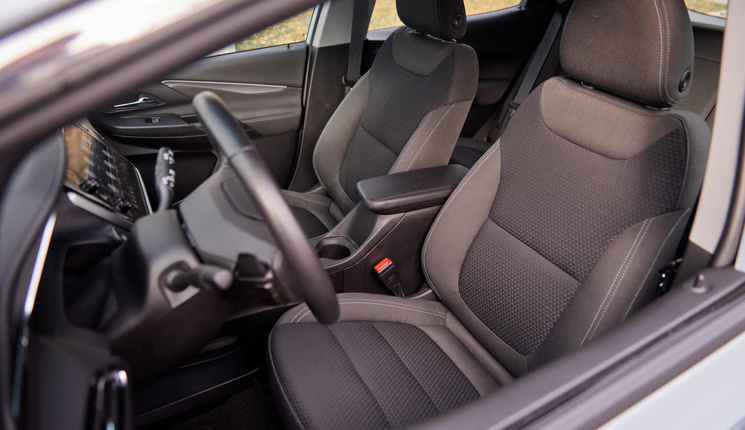 The entire center stack was also overhauled, with HVAC controls now placed underneath the infotainment screen in a piano configuration of hard buttons. There’s now a better-integrated cell-phone storage compartment with available USB connections. Gone is the old physical shift lever. It’s been replaced by buttons on the center console which makes a lot more sense for an electric car. Chevrolet also added a one-pedal driving button for easier comprehension from first-time EV owners. Yes, the Bolt still retains its steering wheel-mounted paddle to modulate regenerative braking to your liking.

But perhaps where this car improves the most is in the general comfort and support of its seats. The Bolt isn’t the penalty box it once was for long drives. It’s now pleasantly comfortable, especially for larger frames like yours truly. And the amount of available space in a Bolt continues to impress given its small size.

Tried and Proven Drivetrain at an Attainable Price

Underneath the new sheetmetal hides the same tried and proven electric drivetrain we know from this nameplate. A 288-cell, liquid-cooled lithium-ion battery back lies underneath the floor. With a 66.0-kWh capacity, it propels one electric motor installed on the front axle. It’s good for an output of 150 kW or the equivalent of 200 horsepower and 266 lb-ft of torque. Range hasn’t changed but it is still competitive at a healthy 417 km as per Natural Resources Canada.

Perhaps where the Bolt EV could have improved, is in its fast-charging abilities. The poor old thing is still limited to 55 kW in a world where 150+ is now common.

One area where we’re not complaining is in this car’s pricing strategy. The Bolt EV is hands down the EV deal now with a starting price of $38,198 before freight and dealer charges. It’s an absolute bargain, especially when you factor in the available incentives. If you live in Quebec where you’ll get $12,000 off the purchase of a new EV, the Bolt comes out to about the same price as a Honda Civic.

I had the Bolt EV during a cool November week where temperatures ranged between 0 and 5 degrees Celsius. When I unplugged the car from my 240V level 2 home charger after pre-heating its cabin, the onboard computer told me I had 386 km of range at my disposal.

However, after driving the car during a 300-km round trip from the Eastern Townships to Montreal that consisted mostly of highway driving (not an ideal scenario for an electric car), I recorded a consumption average of 19.6 kWh/100 km. 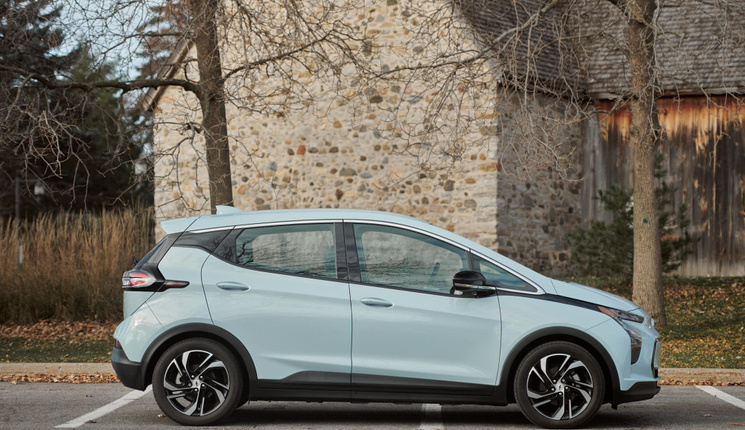 This translates to an average real-world range of 337 km. Considering that the Bolt EV is riding on 6-year-old battery technology, I’d say those numbers aren’t that bad. It may not be an efficiency queen like a Tesla Model 3, but it gets the job done and, perhaps more importantly, costs tens of thousands of dollars less.

But where the Bolt continues to impress me, is its ability to perform like a genuine hot hatchback. Acceleration from 0-100 km/h is done in a brisk 6.7 seconds, or about the same as a Honda Civic Si. Sure, you’re not hearing an engine hit redline nor are you rowing through the gears, but the instant surge of that electric motor is just as fun.

The Bolt may be small, but it’s quite the athlete in the corners. There’s a supremely solid feel from this chassis where no squeaks or cabin noises are heard when driving over rough tarmac. Its suspension just takes it all in, creating a pleasant feeling of heft and quality not many cars of this stature can convey. 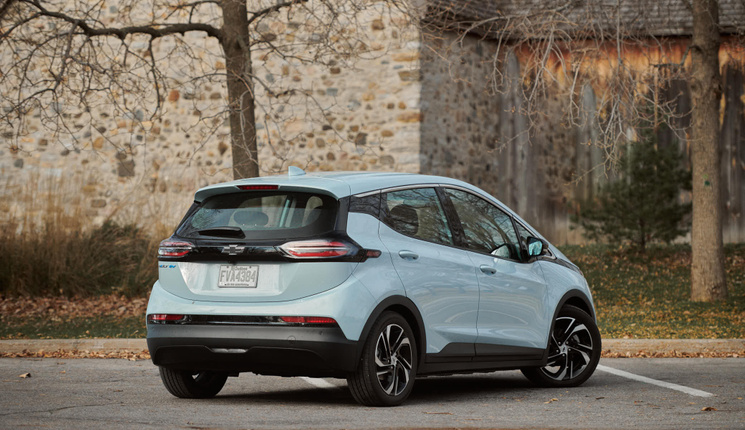 Enter a corner quickly with the Bolt, and all one needs to do is release the throttle pedal for quick deceleration. The car always feels well planted to the ground thanks to that battery. Punch the throttle when exiting that corner, and the little brat simply scoots ahead with zero hesitation. Want a bit more action while doing that? Remove traction control and hold on tight to that steering wheel, because this Chevy will do burnouts.

Look, the Chevrolet Bolt EV is hands down one of my favorite electric cars currently on sale simply because it’s so affordable, so darn fun to drive, and still properly efficient.

What’s also rather alarming about its presence in the automotive landscape is that some carmakers (I’m looking at you Honda, Toyota, Mazda, Subaru, and Stellantis) are still babbling away about how it’s not the right time to release a mass-market EV.

Meanwhile, here we are with a six-year-old subcompact electric car that costs about the same price as a gasoline-fed compact sedan and that’s selling at 30,000 units per year in the US and Canada combined. And don’t get me started on Tesla that’s selling more than 1 million electric cars worldwide each year.

While some carmakers are still denying mass EV adoption, others, like GM, are paving the way for what’s coming next. If the old Bolt is still this good, I can’t wait to see what the General is preparing with its next generation of Ultium-powered cars.