The end of an era.

Join the Conversation (0)
Compared to the Porsche Taycan sitting at the traffic light, the Cadillac CT5-V Blackwing I’m driving is a troglodyte. The electric Porsche is an up-to-the-minute modern rendition of a sports sedan. Sleek, luxurious, and blisteringly quick. And it doesn’t use a drop of gas. Even with the pulsating 668 hp V8 under the hood of the Caddy, I wouldn’t dare challenge the Porsche off the line. Still, there’s no doubt, that I'm behind the wheel of the right car.

I might be a believer but trying to convince others that the best sports sedan now comes from America and not Germany is no easy task. After all, the Germans practically wrote the book on how to build them. And just to be clear here, when I say best, I mean the most fun. The one that most delivers on the sports sedan ethos, and not necessarily the one that is objectively the best on paper.

Few have been able to replicate the German sport sedan formula. That is until Cadillac came out with the CTS-V. It had many of the elements that made German sport sedans fun to drive but was powered by a small block and mated to a manual transmission. There was even a wagon version.

The last CTS-V was endowed with the LT4 supercharged V8 from the Corvette Z06. It was all fire and brimstone, a machine capable of liquefying its rear tires at will but still precise enough to lay down some seriously quick lap times on a track. The manual was gone, but the car was maniacal and just plain brilliant to drive. 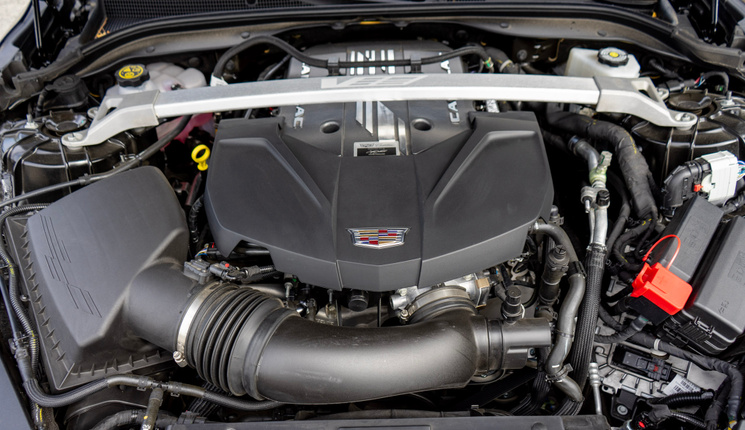 The CTS gave way to the CT5 and the 6.2-litre supercharged LT4 V8 makes a return in the CT5-V Blackwing. It makes 668 hp and a gigantic 659 torques thanks to better breathing through a revised intake and exhaust system. It’s the most powerful Cadillac ever made. Each engine is also hand-built and signed by a single engine builder. In this case, we give thanks to Crystal Strickland.

The manual transmission also makes a comeback and that’s something Cadillac did not have to do. They could have also given it all-wheel drive, but they didn’t do that either. The Blackwing is as pure as sports sedans once were, manual and rear-wheel drive, just as the speed gods intended. 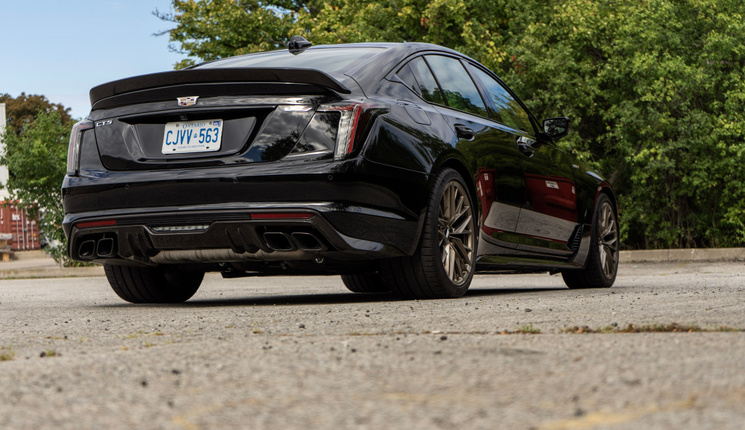 Building on the CT5’s chassis codenamed Alpha II, the Blackwing gets stiffer springs and bushings, hollow sway bars, and most importantly Magnetic ride control dampers, now in their fourth and most advanced iteration. They react four times faster, and allow for increased handling stability with reduced roll, squat, and dive. They also offer a greater spread between ride comfort for the road and stiffness for the track. In addition strut tower braces, thicker rear cross-members, and an underside shear plate improve rigidity even further over a standard CT5-V

Brakes are the largest ever offered by Cadillac, whether you choose the optional lightweight carbon-ceramic binders or not. The steel units on my tester measured 15.7 inches in diameter on the front axle, clamped by 6-piston Brembo calipers up front and 4-piston calipers at the rear. 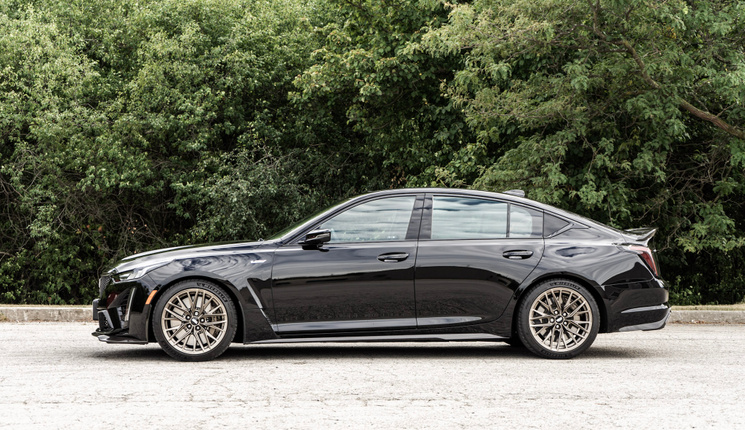 Cadillac also wisely capped the wheel diameter at 19-inches, going against the grain of everyone else’s 20+ inch wheels that are actually worse for performance and ride comfort. Special Michelin Pilot 4S tires are as sticky as street tires come but ride quietly enough to properly represent that Cadillac badge on the nose.

Visually, there are very few identifying clues and apart from larger openings on the front bumper and wider front fenders the Blackwing looks nearly identical to the regular CT5-V. If it weren’t for the optional aero-functional carbon fibre bits tacked on to my tester, no one would have even noticed it. If you’re a fan of sleepers, this might be the ultimate one. In fact the only Blackwing badge I found was on a tiny plate sewn into each of the front seats. 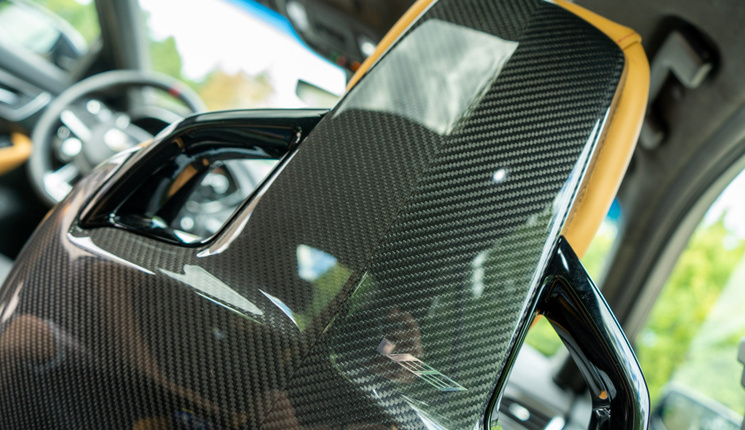 Those seats look the part though. With a carbon-fibre back plate and extra thick bolsters they are very comfortable and very supportive. Just about perfect for the street. At track speeds, however, I felt like they could have used more lateral support. (Check out my track impressions here.)

There’s a lot of drive mode choices to work through but My Mode makes it easy to program the basics like steering feel and chassis stiffness, and most importantly exhaust mode. Set it to LOUD and leave it there and it will stay that way even after you shut it off. You can even instantly turn it all up to max, and that includes engine response and brake feel, by pressing the V button. Once in V mode, you unlock additional Performance Traction Management (PTM) modes. It’s yet another layer of traction control fine-tuning that helps you go even faster on the track without binning it (if you know what you’re doing). 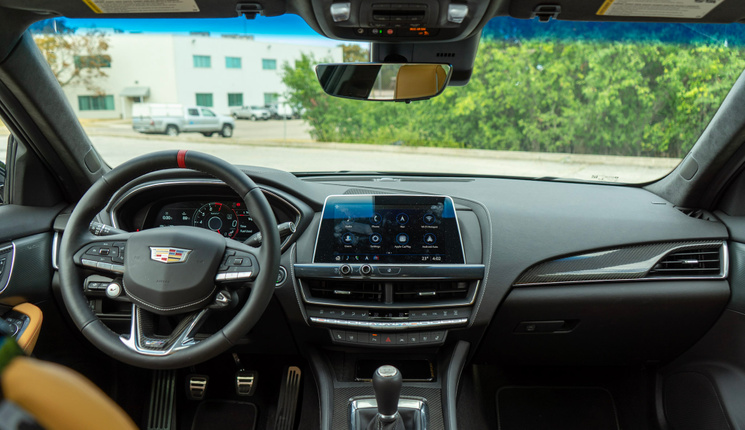 But the real fun with this Cadillac comes from rowing that 6-speed manual. The weighty clutch has great feel and the stubby lever slots into gear with precision and a crisp mechanical feel. The tired cliché “bolt-action” is the best way to describe it. There’s a rev-matching system that you can quickly turn on and off with a steering wheel button and there’s no-lift shifts, which means you can keep your right foot planted when grabbing the next higher gear.

Metering 659 lb-ft of torque through that stubby little lever is just about one of the best experiences I’ve had in a car this year. And it only gets better when you turn the steering wheel and the big Caddy immediately takes a set and holds the line better than anything this size should. Body roll is minimal and the steering is quick, precise, and has good feel. 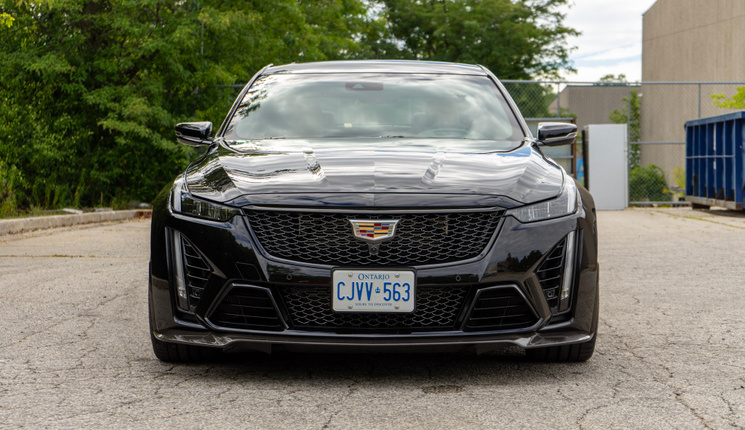 But there’s always that sense that it will murder you if you give it too much throttle. It’s a healthy fear that makes you respect the amount of power under the hood. It’s not like that in a Taycan or a BMW M5. Both those cars' all-wheel drive systems make repeated launches easy. And boring. To do the same thing in the Blackwing requires patience, finesse, and practice. Get it right and you’ll go from 0-100 km/h in under four seconds and the 10-speed auto will do it even faster.

The brakes give you the confidence to lean on them over and over again and when you get back on the gas there’s an endless wall of power followed by the angry exhaust bouncing off the surrounding scenery. In Tour mode, the dampers are soft enough to make the Blackwing feel boaty, but in the best of ways. It glides over bumps and road imperfections like an old-school Cadillac. It’s a bit of an insane car, with a ridiculous bomb of an engine fitted into a sublime chassis, and the whole time you’re driving it you’re grinning ear-to-ear and still comfortable AF. 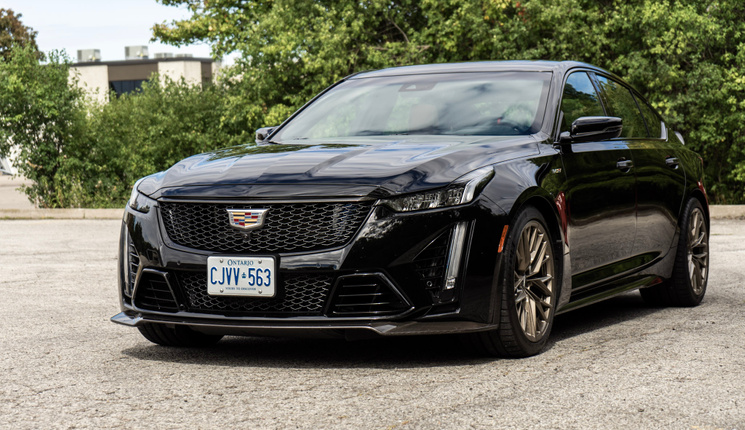 The Blackwing is my favourite sport sedan on sale right now. I mean you get BMW M5 performance for BMW M3 money, which makes it a bargain on top of everything else. Others that experienced the car with me from the passenger seat weren’t so sure. And most of that is due to the interior which doesn’t live up to what you’d expect in a $90K car. The materials feel low rent, the indicator and wiper stalks scream Chevy parts bin and the infotainment system is in dire need of an upgrade.

From the driver’s seat I couldn’t care about any of that. The BMW M5 might have a nicer interior and it might be faster but in a sports sedan it’s the feel and the experience that counts and that’s what you end up remembering. The Blackwing is the last of its kind, one of the most memorable cars I’ve driven. After this, Cadillac moves to an all-electric future. They will never make anything else like this, and frankly, no one else is going to either. If you can afford it, you should be running to your nearest Cadillac dealer to get one before they’re all gone.