Join the Conversation (0)
When it comes to electric vehicles, the future, as the saying goes, is now. Audi is certainly a believer in that notion as it currently offers three pure electrics, e-tron SUV (will become the Q8 e-tron in 2023), Q4 e-tron SUV and e-tron GT sport sedan, with more to come. The focus here is the Audi Q4 Sportback e-tron, a compact SUV unveiled in production form in Spring 2021. It went on sale as a 2022 model about one year ago.

Built on the Volkswagen Group’s MEB architecture for electric vehicles, the Q4 shares some components with the Volkswagen ID.4 compact crossover, has similar dimensions, and is built in the same plant in Zwickau, Germany.

As is the case with other Audi SUVs, two Q4 body styles are available: SUV and Sportback. Both versions are 50 trim which means they’re outfitted with a standard 82 kWh lithium-ion battery that’s paired with two electric motors, one located at each axle. Power output is 295 horsepower and 339 lb-ft. of torque, with a 0-100 km/h time of 6.1 seconds.

In terms of charging, Audi says the Q4’s battery can charge up from five to 80 percent in about 36 minutes on a DC fast charger. According to official federal government ratings from NRCan, Q4 range is 388 kilometres, but that number will vary based on factors including driving style. 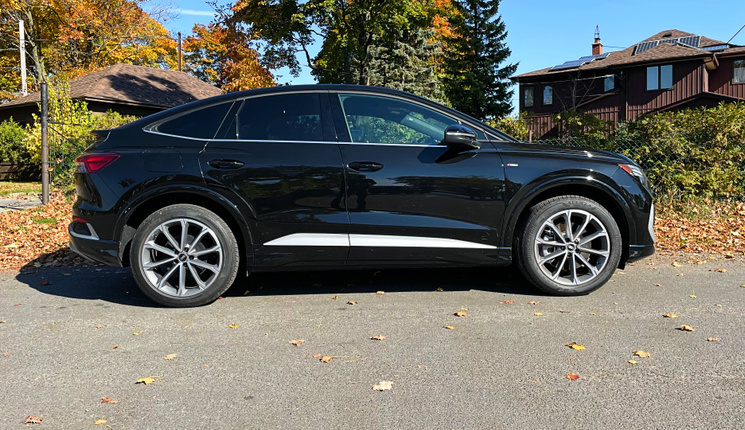 On the content side, the Q4 comes well equipped out of the box, with a slew of premium amenities such as standard leather seating, heated front seats, panoramic moonroof, two rear seat USB-C charge ports and more. As for tech features, they include an 11.6-inch configurable virtual cockpit instrument cluster display, a 10.1-inch multimedia interface (MMI) touchscreen, and an available head-up display with augmented reality (AR) that displays road sign data, navigation directions and other items.

On the outside, the Q4 comes with standard LED headlights (Matrix LEDs are available), LED taillights and LED daytime running lights, along with 19-inch wheels (multiple 20-inch designs are available), power tailgate, S Line exterior bumpers and badging and more. 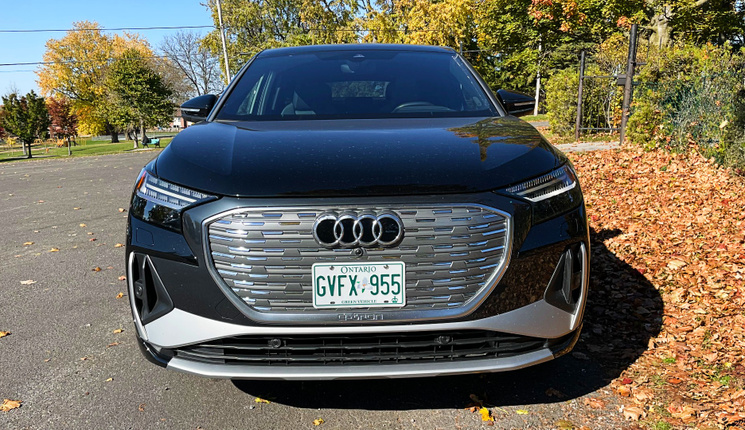 For the purposes of this review, Audi Canada loaned me a Sportback tester finished in Mythos black metallic ($890 paint charge) that’s outfitted with some extras. The Tech package ($1,600) includes items such as a SONOS premium sound system, Matrix LED headlights, driver’s seat with memory function and more. A notable stand-alone option is a set of 20-inch 5-V-Spoke wheels ($1,000).

The Q4 Sportback e-tron really presents well, and while I’m not a fan of black cars as they tend to flatten and obscure interesting design details, I think it works here as it offsets the abundance of chrome and silver trim nicely.

The Q4 has an electric car look, thanks to a sophisticated Singleframe grille, Matrix LED headlights and bigger 20-inch wheels, but it’s not too over the top. Compared to its Q3 and Q5 siblings, the Q4 looks the most contemporary, but it’s high-tech, futuristic aesthetic isn’t overwrought or intimidating. It just looks like the evolution of the SUV. 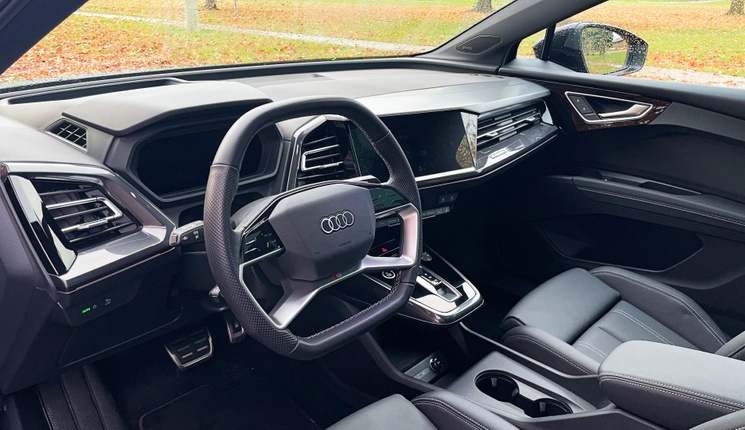 Same goes for the cabin, except for the hexagonal-shaped steering wheel, which has a strong concept car appearance. I adjusted to it quickly, but yes, it’s a little out of the ordinary. One of the aspects I like about EVs in general, is the centre console-dashboard layouts are moving towards fewer buttons, switches, and other things to fiddle with.

This may be due to an electric powertrain, but it also a conscious choice from the manufacturers – less is more. And that’s very much the case with the Q4. Apart from climate controls, which are still on hard keys (bless you, Audi), drive select and the digital screens, there’s not much to distract here. You just notch the gear selector into D (or B) and go. This is a design philosophy that I can get behind.

As for the drive, the Q4 Sportback e-tron delivers a similar experience I’ve had in other EVs, which is quite pleasant overall. Acceleration is quite rapid if the accelerator is mashed hard but applying gradual throttle pressure also produces a good amount of thrust, certainly enough for everyday driving conditions. 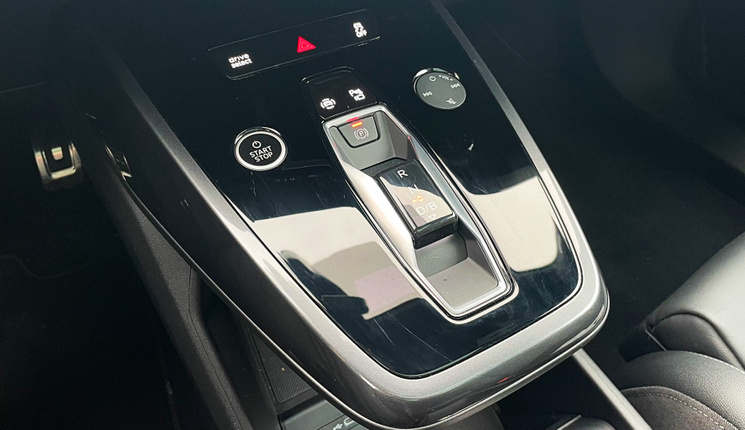 The drive select button, which has settings that range from Eco to Dynamic, does alter the driving character to a degree, but the concept of drive modes feels less vital to the experience than they do in an ICE vehicle, in my view. The difference between D and B is noticeable, however, as the latter applies much greater regenerative braking force than the former. I used B for much of my test period, as I found the extra braking force to be helpful in the cut and thrust of everyday driving.

The ride, of course, is whisper quiet, with some whirring of motors and wind noise is discernable if one pays close attention. Suspension tuning feels neither too soft nor too firm but is well balanced between the two. That, combined with thicker sidewall Bridgestone Alenza tires makes for a smoother ride. 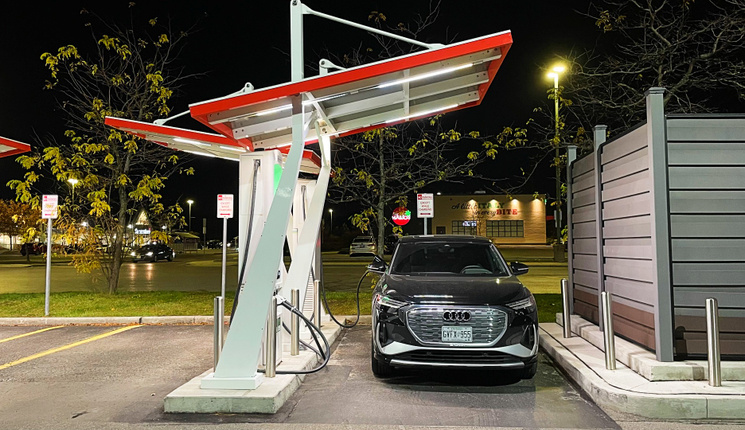 My charging experience was drama free. I used Flo and Electrify Canada fast chargers during my test, and it took about 40-ish minutes on each occasion to go from low-20s state of charge to near full, which seems reasonable. Of note, the Q4 comes with complimentary access to the Electrify Canada charging network (owned and operated by Volkswagen Group Canada) for four years or 1,400 kWh.

Overall, I come away impressed with the Q4 Sportback e-tron. The only negatives that stand out in my mind are less rearward visibility due to its sloping roofline and an interior that could use extra styling pizzazz. It’s a handsome premium offering that’s packed with technology, with good range and solid performance for a competitive price, plus free fast charging for four years.

The premium compact segment figures to be just as competitive for EVs as it is with ICE cars, and the Q4 is well positioned to win a good chunk of that business for Audi.