Ours to Discover Quebec: Historical Tadoussac is a whale of an adventure

One of the oldest villages in North America, Tadoussac is rich in marine life and history.

Join the Conversation (0)
In this four-week special series, Wheels takes a road trip through eastern Quebec, learning more about the people, culture and history of the region. We learn why La Belle Province is “Ours to Discover” this summer and beyond. This week we leave the Charlevoix region for the Côte-Nord village of Tadoussac.

For centuries, Tadoussac has been a gathering place. It is home to the southernmost pod of beluga whales in the world. It annually welcomes visits from fin, minke and even humpback whales. The Innu and other Indigenous people lived and hunted in this area, where the Saguenay River – one of the longest fjords in the world – meets the St. Lawrence River. Now it is welcoming modern visitors keen to learn about the marine mammals that are drawn to this unique ecosystem.

In the morning: After breakfast, drive 30-minutes east of La Malbaie along Route 138 to Port-au-Persil, a picturesque coastal village with a scenic lookout, small chapel built in 1893 and a waterfall. It is said Samuel de Champlain named the point after the parsley he found growing there in 1626.

There are numerous connections to the explorer in the region. Even the name of La Malbaie is believed to have been coined by Champlain, who, finding the nearby bay unsuitable for sailing, referred to it as the malle-baye, Latin for “bad bay.”

Further along you will soon arrive at the Saguenay River where a pair of ferries make the free crossing every few minutes, connecting the community of Baie-Ste-Catherine on the western shore with Tadoussac on the east. The ride takes only 10 minutes, but it is well worth getting out of your car to scan the river for beluga whales.

Around noon: As you arrive in Tadoussac, stop by the Croisières AML offices on Rue des Pionniers to purchase tickets for a whale watching tour. There are a few excursions to select from, including by Zodiac, but its multi-deck boat offers different vantage points as well as an indoor space since the St. Lawrence River can be cold even in summer. Its three-hour excursions depart at 9:45 a.m., 12 p.m., 1 p.m. and 3 p.m.

Once you have your tickets, drive toward the Tadoussac harbour and leave your vehicle at one of the municipal paid-parking lots. There is one in a sunken area next to the Marine Mammal Interpretation Centre and another near the end of the quay.

From there, stop for lunch at one of the restaurants that overlook the harbour, like Le Gibard Cafebar. This bistro’s offerings include shrimp ceviche, croque-monsieur and smoked salmon pizza. 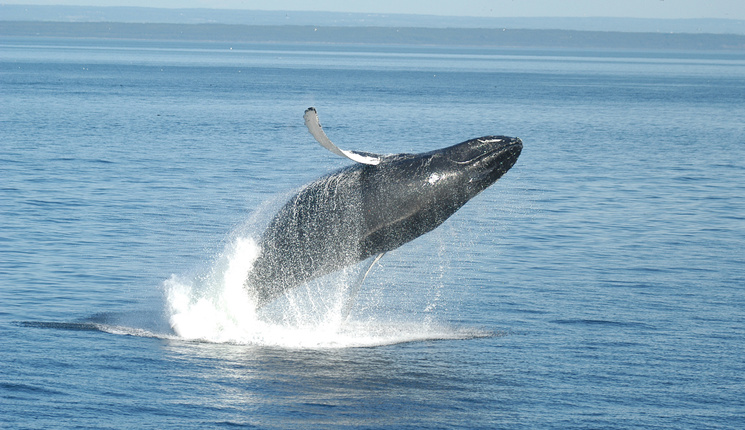 In the afternoon: Be at the quay at least 30 minutes before your scheduled whale watching departure. Once arriving in port, passengers who boarded one of the earlier cruises will disembark before you go onboard. Your voyage will start by heading across the river to Baie-St-Catherine to drop off and pick up passengers before exiting the mouth of the river and venturing into the St. Lawrence.

This whole area is part of the Saguenay-St-Lawrence Marine Park, a 1,246-square-kilometer conservation area that was established in 1998. The purpose of the park is to protect the marine animals that include belugas, porpoises, whales and seals. 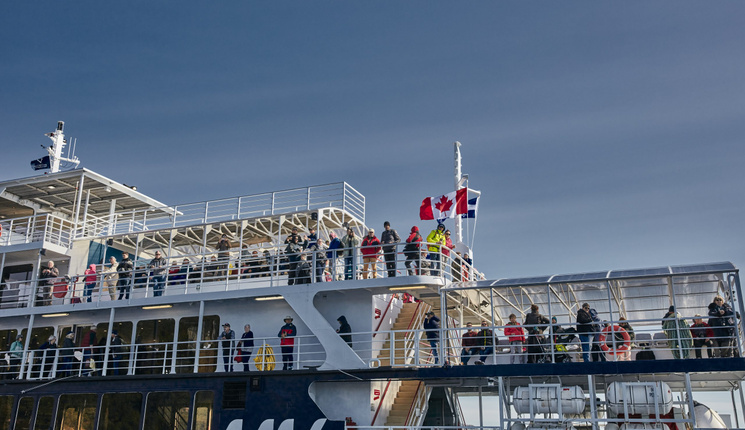 One reason marine mammals are attracted to the region is the shape of the seabed of the St. Lawrence in the area. Starting just east of Tadoussac, the bottom of the river drops from a few metres to hundreds. Krill, a key source of food for whales, will follow the deeper, colder water from the gulf upriver to the area. Throughout summer their numbers grow, attracting the whales.

Don’t worry about missing them. A member of the crew provides updates on any sightings over a public address system, using a hands-on-the-clock approach to let you know where to look (for example, three o’clock would be on the right side of the boat). If you want to locate them on your own, look for groups of birds above the water, a breach of a whale tail or back, or other tour boats that are congregating together. 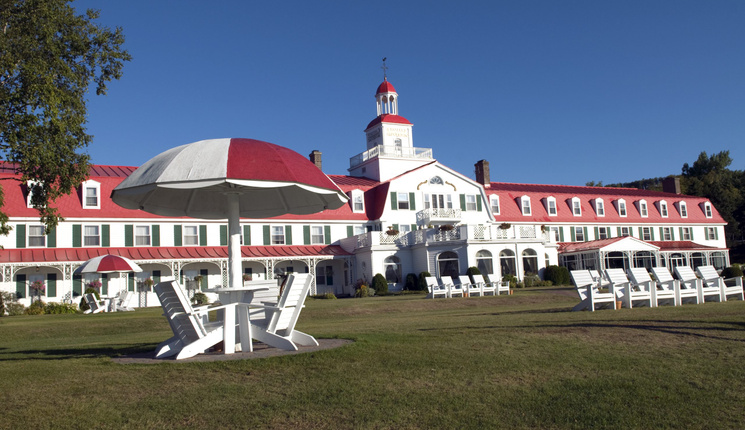 In the evening: Back on land, check into the Hôtel Tadoussac, a white-and-red building perched on a hill across from the harbour. A hotel has stood in the site since 1864, with the current grand building dating from 1947.

You’ll feel like you have walked into a different era as you relax in its ample main lounge that faces the water, and dine in The Coverdale, the on-site restaurant where the walls are adorned with wainscotting made from wooden doors and cabinets from the 18th and 19th centuries and painted murals of the provincial landscape and history.

Start with a plate of pheasant liver mousse parfait with port caramel and sea buckthorn spread before moving on to the cod fillet and shrimp topped with grilled corn and avocado salsa or the deer medallion in a chai tea and dark chocolate sauce.

In the morning: After breakfast at the hotel, walk over to the Marine Mammal Interpretation Centre and learn more about the whales that regularly visit this area. Before you enter the building be sure to gaze over the Saguenay River, as whales are known to swim past the centre. 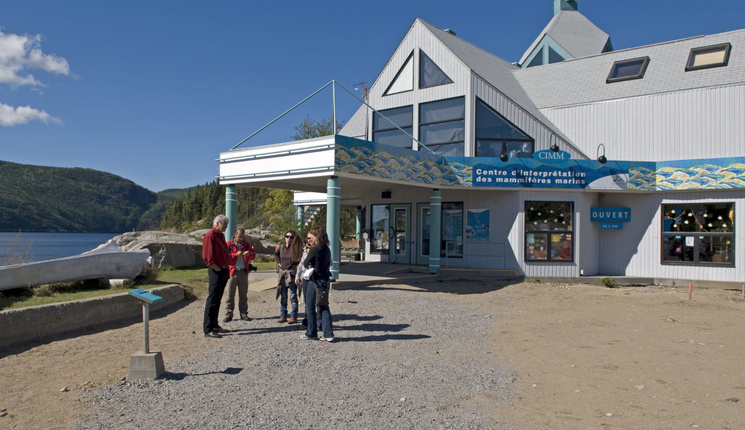 Inside the exhibition hall you will be greeted by the skeletons of the various whales know to live or visit the Saguenay-St-Lawrence Marine Park hanging from the ceiling – including a 13-metre-long sperm whale.

The centre includes exhibits about the 13 species of marine mammals that live in the area, introduce you to some of the 450 named beluga whales – about half the local population – and learn about whale songs. A naturalist is always on hand to help answer any questions visitors may have. 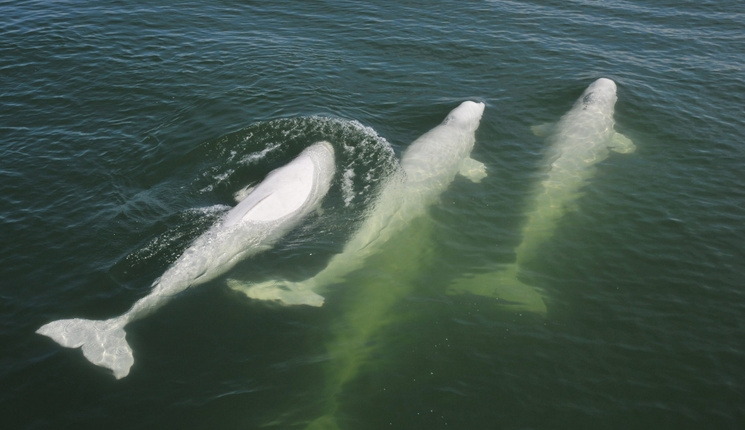 Around noon: Stop for lunch on the patio at the Bistro de la Baie, located above the marina, and enjoy a serving of the house specialties; beer-battered fish and chips or pork ribs covered in a bourbon-barbecue sauce.

In the afternoon: Spend time exploring Tadoussac, which bills itself as the oldest village in North America. The Innu lived in the region for generations, and Jacques Cartier stopped here during his second voyage in 1535.

Located next to Hôtel Tadoussac is the Poste de Traite Chauvin, a recreation of the original trading post set up by French settlers around 1600. Inside you can learn more about the Innu and other Indigenous people who lived in the area, and the arrival of Europeans – including the Basque who came to hunt whales. Its collection was amassed by William Hugh Coverdale, president of the Canada Steamship Lines and a former owner of the hotel.

After, walk across the street to the La Petite chapelle de Tadoussac, which was built by Jesuit missionaries in 1747. It is the oldest wooden church in North America and houses a collection of religious artifacts.

In the evening: End your visit to Tadoussac by dining at Le Café Bohème. The charming restaurant’s menu is full of creative dishes, including roasted halibut with spinach and celery pesto, stuffed guinea fowl and roasted Arctic char with fiddleheads and horseradish sour cream.

For the drive: A few years ago, a stray narwhal was adopted be the beluga whales in the Tadoussac area. Learn more by listening to its story on CBC Radio’s “The Current,” available on Apple Podcasts.

Next week: We cross the St. Lawrence River by ferry to explore the Bas St-Laurent region.

DISCLAIMER/TAG: The Toronto Star has partnered with Bonjour Quebec to bring you this road trip series. The writer travelled as a guest of Bonjour Quebec, which did not review or approve this article.