Ours to Discover: Eastern Townships to Quebec City, A road trip filled with warmth

From wineries to historic villages and Indigenous experiences, Quebec has a lot to offer in winter

Join the Conversation (0)
In this four-week series, we take readers on a road trip through Quebec, learning why La Belle Province is ours to discover this winter. This week, we start our journey in the Eastern Townships before heading to the provincial capital.

Few places in Canada embrace winter with the same enthusiasm and energy as Quebec. The arrival of snow in La Belle Province – topping the roofs of its historic buildings and blanketing tree branches – is eagerly awaited. Here’s how to make the most of the season during a road trip from the Eastern Townships through Centre-du-Québec to Quebec City.

In the morning: Make your first stop the historic town of Sutton, located about an hour-and-15-minute drive southeast of Montreal. Spend time walking along Rue Principale, which doubles as Route 139, admiring its quaint shops, galleries and restaurants.

Like many communities in the Eastern Townships, Sutton was founded by United Empire Loyalists around the 1800s, and there are a series of self-guided audio tours – available through the town’s website – that explore some of the area’s rich heritage. 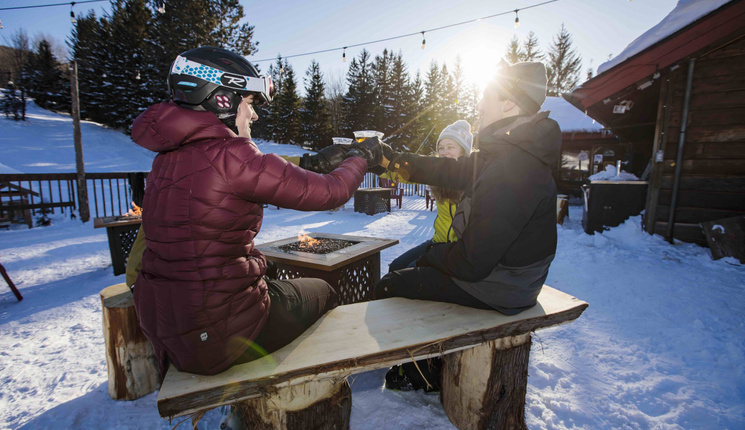 Sutton is also on the Chemin des Cantons and Route des Vins, two scenic drives that weave their ways through the Eastern Townships highlighting historical sites, local attractions and businesses. Make sure to stop by Le Vignoble du Ruisseau, a winery near Sutton that uses geothermal heat to extend the growing season of its grapes. Designate a driver and visit for a tasting or stay for a meal at the winery’s restaurant – about 65 per cent of the ingredients it uses come from its own farms and gardens.

Around noon: Have lunch at Mollies, a charming café with large windows overlooking the main roadway in Sutton. Dine on a grilled cheese made with cheddar, gruyere, and pickled onions, or the Piggy Panini featuring pork roast and ham.

In the afternoon: Drive less than 10 minutes east to Mont Sutton, a popular destination for winter activities in the province. This nature area features 60 glades for skiers to enjoy while admiring the unique sculptures of birds and animals – made from wood and recycled materials – placed near the trails.

If skiing isn’t your thing, don’t worry. You can rent snowshoes, snowboards or a yooner – a seat attached to skis that sits 20 centimetres above the ground and can be used to slide down hills. Or, if you aren’t feeling like doing any activities, simply enjoy an apres-ski afternoon sipping a hot chocolate at Bar Le Tucker.

In the evening: Stay the night at Auberge West Brome, located a 20-minute drive from Mont Sutton. This quaint country hotel is set against the rolling hills of the Eastern Townships with rooms split between three house-like buildings.

For dinner, stroll over to the main building to the Bistro West Brome. The restaurant’s menu options include dishes made using local ingredients, such as the duck confit with butternut squash ravioli and served with a ginger-infused sauce.


In the morning: After a breakfast of crepes or waffles with fresh berries at the hotel’s restaurant, begin driving north into the Centre-du-Québec. The region is full of local producers, making everything from honey and meads to ciders and cheeses.

One must-visit is the Fromagerie du Presbytère in Sainte-Élizabeth-de-Warwick, where a former church has been transformed into a cheesemaking facility. From the narthex – the entrance hall – you can peer through glass windows to see the stacks of cheese wheels being aged in the former nave. A robot operates between the shelves, selecting wheels to brush and flip it before placing them back. 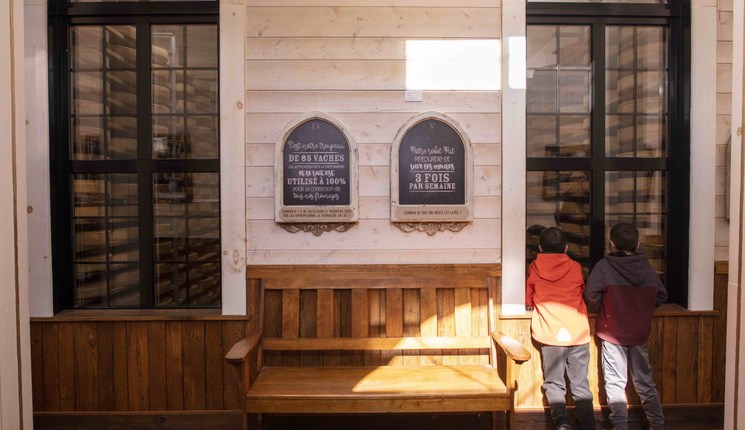 Across the road from the church, there is a general store where you can purchase cheeses (along with other local products) and taste some of the varieties, like the Religieuse, a semi-soft cheese made from unpasteurized cow milk, or the Taliah produced from sheep milk.

Around noon: Drive to nearby Drummondville, which calls itself Quebec’s capital of expression and traditions. Stop for lunch at the Rose Café, a small bistro located in a store that sells local products and includes a greenhouse and florist. Dine on one of its sandwiches, soups or quiches featuring vegetables grown on site.

In the afternoon: If it is open, stop by the Village Québécois d'Antan, a recreation of a 19th century Quebec village that is also a living museum. The site features 70 buildings, including a school, barns, workshops and a traditional cabane à sucre (sugar shack).

The latter takes centre stage in March and April when d’Antan hosts Le Village Sucré celebrating everything maple syrup related. Visitors are transported to the sugar shack, which dates to the 18th century, in a vintage tractor and are taught about the process of turning maple sap into syrup.

Be sure to visit Le Musée des Abénakis in the nearby community of Odanak on the St. Francis River. Founded in 1965, it was the first museum dedicated to Indigenous culture in the province and uses the four seasons to recount the history of the Abenaki First Nation. 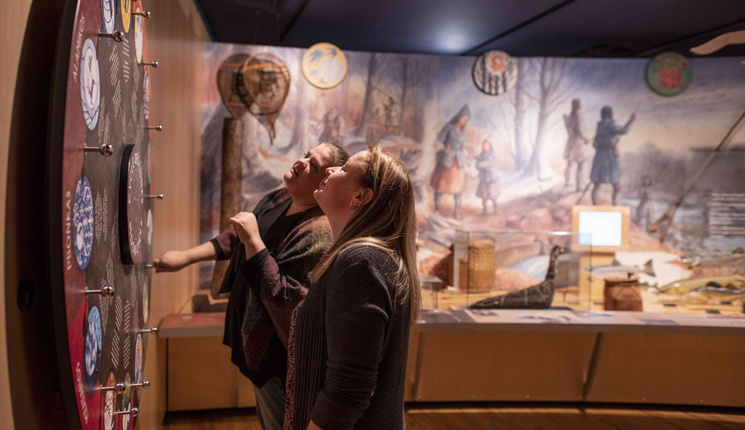 Your visit will start with a multimedia presentation recounting the creation of the world before learning about traditional hunting techniques and the importance of basket making in the community. There is also an exhibit featuring artifacts found during archeological digs in the early 2010s of a former fort that existed on the site from 1704 to 1759.

In the evening: Spend the night at the Auberge Godefroy, a hotel, spa and golf course in Bécancour, a town located across the St. Lawrence River from the city of Trois-Rivières. Before a three- or four-course dinner at the hotel’s restaurant, unwind at the Espace Aqua-Détente, its spa that features hot tubs, a sauna, and swimming pools.


In the morning: Enjoy breakfast at La Maison de Bibi, about a 10-minute drive east of the hotel. After fueling up on items from its extensive menu – such as the breakfast poutine made with fries, hollandaise sauce, ham, bacon, egg and cheddar – visit the handmade soap store that shares the space. 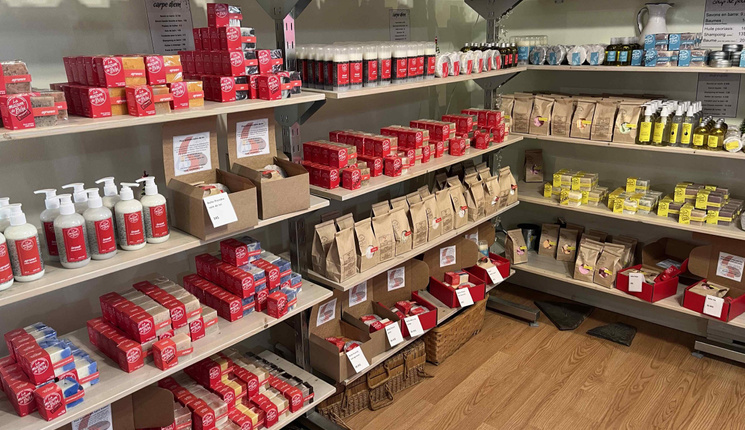 First opened in 2011, the soap store produces around 50 different varieties available in liquid and bar form, with the most popular scent being its lime and lavender combination – the lime adding a hint of rebelliousness to the refined lavender.

Next, drive to the Moulin Michel de Gentilly, one of the few historic mills in the province that still operates. Dating from 1774, the mill was used to grind buckwheat for local settlers. You can learn how the flour was refined and sorted before heading to the adjoining café to try some pancakes or purchasing a bag of ground buckwheat.

Around noon: Start your drive toward Quebec City, which is roughly one-and-a-half hours away by taking Autoroute 40. For a more scenic trip, take Route 132, which hugs the shore of the St. Lawrence River and adds roughly 30 minutes to your journey.

In the afternoon: While other places may go into hibernation during winter, Quebec City comes alive. Once you arrive, spend time exploring the cobblestoned streets of the old city, go ice skating at the Place D'Youville or ride the toboggan slide at the Dufferin Terrace next to the Fairmont Le Château Frontenac. 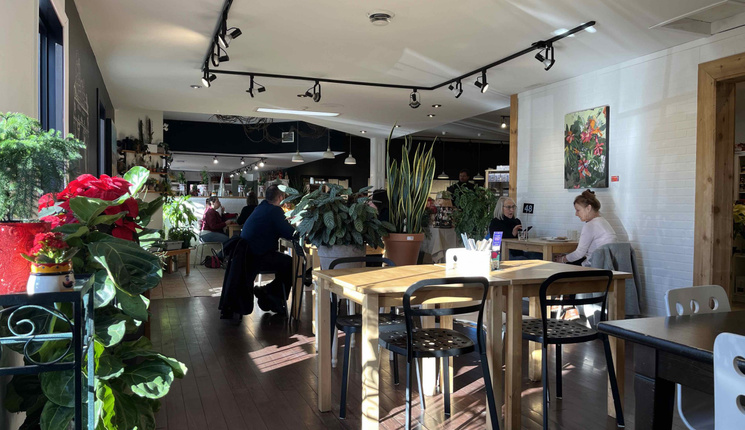 Starting in January, you can visit the Hôtel de Glace, the only ice hotel in North America, which is built from 2,300 blocks of ice and 15,000 tons of snow. Or, from Feb. 10 through March 12, you can try ice fishing at the Village Nordik in the city’s old port.

For an iconic Quebec City experience, visit between Feb. 3 and 12 so you can take part in its annual winter carnival – the oldest in the world. The event features ice sculptures, outdoor night concerts, parades, ice canoe races and activities for all ages.

In the evening: Head to nearby Wendake for Onhwa’ Lumina, a 1.2-kilometre pathway through the woods were lights, sounds and video projections are used to celebrate the culture of the Huron-Wendat Nation. The nighttime experience follows a great circle beginning with the culture’s founding myth, weaving through a traditional longhouse and village and then into the stars and the community’s future.


While in Bécancour, stop at the Distillerie du Quai, which produces a line of gins where a musical playlist – curated by Quebec musicians and DJs – is played during the distilling process. The bottles have a QR code that takes you to Spotify to hear what music was played when that batch was made. Buy a bottle snd listen to its playlist while driving. Once at your hotel, take a sip and see if you can taste those musical influence on its flavour.


We follow the Chemin du Roy from Quebec City toward Montreal.