A short drive from The Six, you’ll find restaurants in smaller communities serving up big-city-calibre flavours. Get ready for a tasty change of scenery at these destination restaurants.

When itchy feet combine with a grumbling stomach, there’s only one solution: a restaurant road trip. While Toronto has no shortage of wonderful places to eat, why settle for a mere meal when you can hit the pavement on a culinary adventure? A short drive from The Six, you’ll find restaurants in smaller communities serving up big city-caliber flavours. Get ready for a tasty change of scenery at these destination restaurants.

The return of the Stratford Festival, which runs until October, is rightfully attracting theatre buffs to Justin Bieber’s former stomping grounds, but the city has also seen a series of new restaurant openings that are worth a trip in their own right. Chief among the trendy newcomers to Stratford’s dining scene is Lovage, which is run by chef Jamie Crosby, an alum of Copenhagen’s Noma and Jen Agg’s Toronto wine bar, Grey Gardens.

Crosby takes inspiration from casual Parisian bistros for his cuisine du marché – “cooking from the market” – approach. He knows how to make the most of what’s in season, with every dish on the restaurant’s constantly changing menu popping with bright flavours. With its pressed tin ceilings, exposed brick walls and open kitchen, the restaurant’s timeless design plays up the building’s historic details.

How to get there: Stratford is just under a two-hour drive from Toronto, heading west along Highway 401.

From its food to its setting, Cambridge Mill strikes an inviting balance between rustic and elegant. The restaurant is housed in the 19th-century Dickson Mill, one of the oldest remaining buildings in Cambridge. You can admire the mill’s original stonework as you make your way into the restaurant, where floor-to-ceiling windows overlook the Grand River.

At lunch and dinner, the Mill’s food program brings a farm-to-table approach to crowd-pleasing dishes like burgers and pasta. The restaurant also recently relaunched its Sunday Brunch program, featuring a stunning spread of fresh seafood, homemade pastries and prime rib that will make you rethink everything you thought you knew about buffet dining.

How to get there: Head west on Highway 401 from Toronto. The drive takes around 90 minutes. 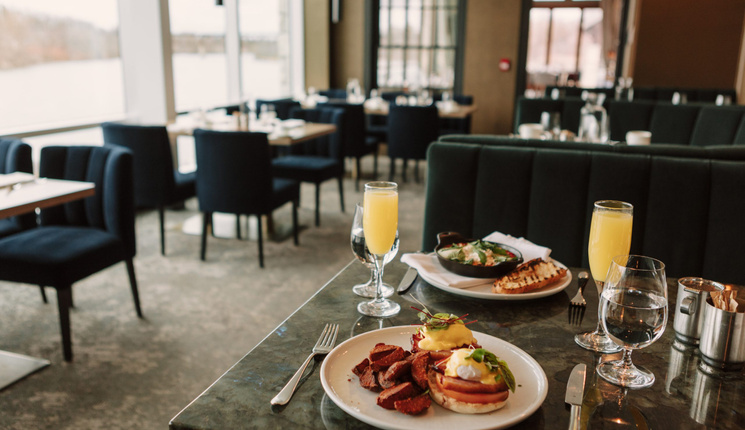 The sister cafe to restaurant and winery Pearl Morissette is an appealing option for day-trippers who want to get a taste of its acclaimed food program at a more budget-friendly price point. Simple, ingredient-driven dishes like pasture-raised chicken sausage feature veggies and herbs grown on the winery’s 1.5-acre regenerative farm and garden or sourced from other local farms.

The grains and other ingredients used to produce the bakery’s buttery pastries and slow-fermented sourdough breads also leverage the winery’s connections to Niagara’s farmers and millers. Enjoy lunch paired with a glass of Pearl Morissette’s low-intervention wine in the cafe’s wood-and-stone-accented interior or out on its pretty patio. Pick up an assortment of sweet and savoury pastries to take home, along with superb grab-and-go items like chicken liver pate or whipped cultured butter.

How to get there: Head west on Highway 403 and then take the Queen Elizabeth Way. The drive takes a little over an hour.

Greystones Restaurant and Lounge in Orangeville

If the white chocolate-flecked coconut cream pie served at Greystones seems familiar, it’s because the same slice can also be found on the menu at Toronto restaurant, Scaramouche.

Led by Scaramouche chef Keith Froggett and his son Benn, with former Scaramouche sous chef Shigetaka Wakai at the helm in the kitchen, Greystones shares a similar emphasis on high-quality, seasonal fare as its long-running sister restaurant. Rather than French cuisine, however, this Orangeville restaurant takes a cue from its setting in a restored 19th-century tavern for its approachable menu of house made pasta, Ontario beef burgers and grilled Ontario AAA steaks.

With several distinctive spaces, including a polished lounge, a main dining room featuring a hand-painted mural and a refined cafe, Greystones is a perfect anytime spot. Grab a scratch-made pastry in the morning or sip a glass of wine at the bar while soaking up the sunset glow through the lounge’s floor-to-ceiling windows.

How to get there: Orangeville is around a one-hour drive from Toronto, heading north on Highway 410. 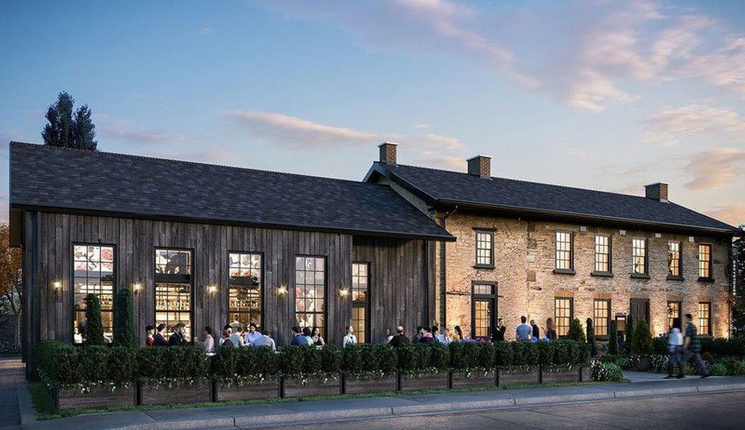 Year after year, Langdon Hall continues to prove why it’s hailed as one of Ontario’s most exceptional dining experiences. Chef Jason Bangerter encourages diners to tour the estate’s gardens to see first-hand where much of the restaurant’s ingredients come from before they sit down to dinner.

It’s not uncommon for Langdon Hall’s culinary team to harvest produce from the gardens and bring it straight to the kitchen to prepare. This proximity to the gardens gives the restaurant a rare capacity to showcase ingredients with brief harvest windows, such as fresh coriander seeds or trout lilies prior to flowering. Dishes also incorporate honey produced by the property’s own hives, as well as foraged ingredients that grow in the Carolinian forest surrounding the Cambridge estate. A grand setting and beautiful plating complete the transportive dining experience.

How to get there: Drive west on Highway 401. The trip to Cmabridge takes about 90 minutes.

The writer was hosted by some of the featured businesses, which did not review or approve this article before print.