Join the Conversation (0)
While rural Ontario has an abundance of quaint small towns, some have just barely withstood the vagaries of time and weather, while others have simply given up the ghost. Here are five long-deserted towns to explore if you’re in the mood for an eerie daytrip this Halloween weekend.


An undeniable eeriness pervades ramshackled Balaclava, an abandoned town in Renfrew County in Eastern Ontario. The history of the now dilapidated sawmill, which prompted the first-ever environmental lawsuit in Ontario in the early 1900s, mirrors the rise and eventual fall of the mill town. Balaclava was established along Constant Creek in 1855, and by 1860 the community boasted a hotel, blacksmith shop, general store and numerous homes. Purchased by the Richards family in 1868, the mill — and thus the town — prospered until timbers supplies were depleted. Area farms soon started to dwindle, and a much-wanted rail service failed to materialize. The remaining buildings are privately owned.

Stop along the way: Continue your exploration of old buildings with lunch at the Granary Restaurant, a 20-minute drive down Highway 41 in Eganville. The century-old edifice (constructed in 1899) is home to a 30-year-old schnitzel house.


A ghostly vibe persists in Eldorado even though approximately 50 people (versus the one-time population of 4,000) still live in this former gold-mining town in Hastings County. You need only walk down Main Street and gaze at the dilapidated grocery store or the long-shuttered gas station to understand why people consider it a ghost town. Eldorado sprung up in 1866 after Irish farmer John Richardson discovered gold in his pasture. This unleashed a frenzied influx of hopeful gold diggers, as well as amenities: hotels, saloons, grocery stores, doctor’s office and law firms. However, Ontario’s first gold rush was squashed amidst accusations of “false gold” and legal disputes over land ownership. A plaque along the highway chronicles the Hastings Gold Rush.
How to get there: Take Highway 401 east to Durham Regional Road 9 in Clarington and continue along Ganaraska Road. Follow County Road 9 and Route 45 to Highway 7 in Norwood, then northward on Highway 62.

Along the way: After exploring the ghostly mining town, it’s only fitting to chow down at the Hidden Goldmine Bakery, located in Madoc, a nine-minute drive down Highway 62. The seasonal Halloween menu includes lots of pumpkin-inspired treats.


If there’s a ghost in Cooper’s Falls, perhaps it’s the spectre of English immigrant Thomas James Cooper railing against the vices of alcohol. Cooper and his wife, Emily, homesteaded near the eponymously named Cooper’s Waterfalls on the Black River in 1864, about five kilometres from Washago. By the 1870s, Cooper had built a sawmill, house and a store. Other structures soon followed: a blacksmith shop, cheese factory and two churches. Prosperity accompanied the growth of the lumber industry — as did the consumption of alcohol, prompting Thomas to become a temperance advocate. He hit the lecture circuit postulating the evils of the drink. Thomas’ son, William, took over from his father but died in a machinery accident in 1921, leaving his widow to raise nine children, whereupon the settlement went into decline and the mill was eventually shut down. Visitors will find a now-shuttered Methodist Church, an Anglican Church, several other buildings in decay and fewer than 15 residents.

How to get to Coopers Falls: Drive north on Highway 400 merging onto Highway 11. Take Canal Road in Severn Bridge, then follow Coopers Falls Road to Kings River Road in Ramara.

Along the way: A 25-minute drive from Cooper’s Falls, the iconic Webers has been serving up burgers along Highway 11 since 1963. Note: It is only open Friday to Sunday starting mid-October.


Allan’s Mills, just west of Perth in Lanark County, is one of the more intact ghost towns in Ontario, though the highlight for some day-trippers is the Scotch Line Cemetery, where many of the hamlet’s original citizens are buried. The community was established after Robert Allan built a sawmill. Thereafter a general store, blacksmith, post office, wagonmakers, shoemakers and school followed. Though the original cemetery was only officially registered in 1886 (at a cost of $75), the townsfolk had already interred 10 people before finalizing the paperwork. The town’s decline started as early as 1980. Various buildings have survived — making Allan’s Mills a delight for photographers. A walk among the tombstones, some of which are leaning, can be a bit scary.

How to get to:  Head east on Highway 407 before heading north on highways 115 and 7 to Rylstone Road.

Along the way:  For a dose of the macabre, drive 10 minutes to the Last Duel Park in Perth. The 10-hectre nature reserve along the Tay River is named after last fatal duel in Upper Canada in which two law students, John Wilson and Robert Lyon, competed for the love of schoolteacherElizabeth Hughes. You can grab a take-out lunch at the Twisted Fork Café in Perth. 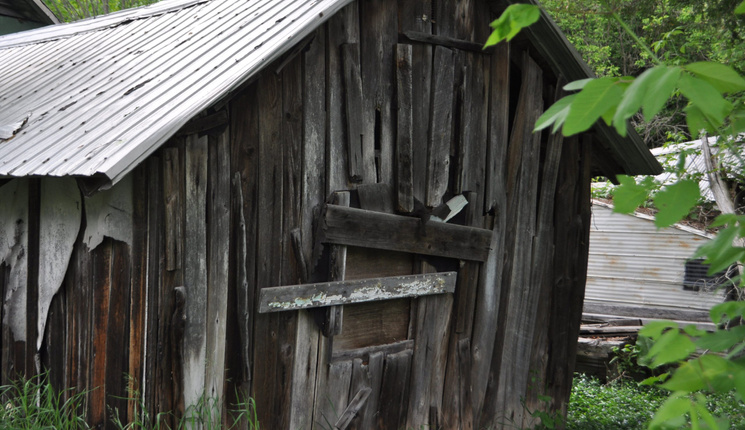 
Germania, now part of Bracebridge, was founded by German settlers who, by the turn of the century, had established a school, post office, general store, Lutheran church, Methodist Church and blacksmith shop. The population numbered about 200. Among those were the Suter family, whose unmarried daughter, Eva, gave birth in 1909 to a boy, named Dolan. What follows is heartbreaking. Baby Dolan was discovered strangled and buried in a swamp in 1911. The ensuing trial was mired in accusations of infanticide. The young mother, found not guilty, eventually married and gave birth to another son who was killed in the Second World War. Poor farming and the decline of the lumber industry rang the death knell for Germania. There are faded signs of the old school and community house, though the Lutheran Church is still standing.

How to get there: Head north on Highway 400 and merge onto Highway 11. Exit on Muskoka District Road 6 in Gravenhurst and then continue along Doe Lake Road.

Along the way: For a little levity, visit the iconic 65-year-old Muskoka theme park Santa’s Village, which offers a retro take on Christmas and amusement park fun. It is only open on weekends in October.

The “Real Scary” podcast serve up tales of eerie and haunted places in Canada. Listen to Episode 26 to hear about the headless nun. It is available from iheart.com.