Will Tesla be the company to revolutionize the auto industry?

Tesla Motors Inc. may be the new kid in town as far as automotive brands are concerned but when it comes to brand recognition it's up there with the big boys.

Will Tesla Motors be the car company to revolutionize the automotive industry as Nikola Tesla did to the industrial revolution?

Tesla Motors Inc. may be the new kid in town as far as automotive brands are concerned but when it comes to brand recognition it’s up there with the big boys.

The new car company is performing well against the competition in the arena of EV sales despite the fact it operates on a radically different business model to traditional car companies.  Although electric vehicle production is microscopic compared to the 87.3 million light duty and commercial vehicles produced in 2013,  there are whispers suggesting Tesla Motors Inc. aims to bring 500,000 of its electric vehicles to  market by 2020.

Six years ago the first Tesla Roadster hit the pavement with a 0 to 60 mph time of just 3.7 seconds. Currently,  the premium sedan known as Model S is offered in a variety of configurations including the P85 performance model.  The recently released Model D, an all wheel drive version with dual motors,  has built-in technologies that can read speed limit signs and self adjust to match what’s posted on the sign.  Performance numbers include a world-class 0 to 60 mph sprint of 3.2 seconds.   The next Tesla EV to be added to the line-up in 2015 will be Model X, the highly anticipated luxury crossover utility.

Tesla Model S:  It looks even better in person 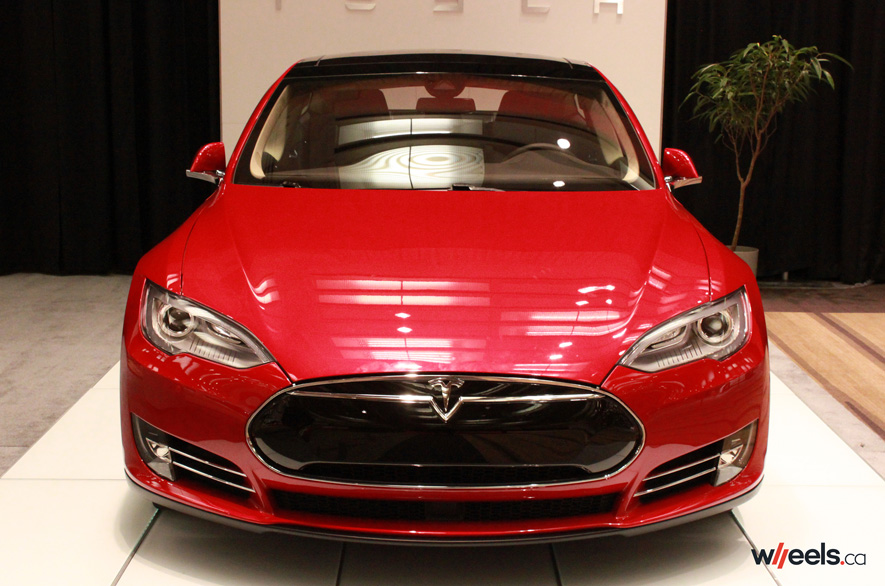 I saw my first Tesla in mid-December while at a stop light.  As I waited for the light to turn green,  my dead-ahead gaze quickly changed into an intense, wide-eyed stare when I realized the back end of the vehicle in front of me did not have a familiar domestic nor import decal on its back end.  When the light changed the Tesla Model S P85 rolled slightly backwards before it zipped quietly out of the gate, ripped up the hill and vanished out of sight. With its ability to deliver 100 percent of peak torque from a standing start, no wonder it disappeared in a flash.

It’s not every day you see a vehicle with the same name as one of the most influential inventors of the modern age.  The sighting of my first Tesla inspired me to make an attempt to connect the dots between Nikola Tesla the 20th Century mastermind and Tesla Motors, the innovative 21st Century car company.

The Tesla Memorial Society of New York shares some of Nikola Tesla’s contributions to science and the industrial age:

Tesla was a pioneer in many fields.  Among his discoveries are the fluorescent light , laser beam, wireless communications, wireless transmission of electrical energy, remote control, robotics, Tesla’s turbines and vertical take-off aircraft. Tesla is the father of the radio and the modern electrical transmissions systems. He registered over 700 patents worldwide. His vision included exploration of solar energy and the power of the sea. He foresaw interplanetary communications and satellites.

Various articles suggest Mr. Tesla lived his life as a scientist, physicist and inventor through one part idealism, one part vision and one part application.  Legend has it that Nikola’s epiphany for the design of the alternating current induction motor came to him in a dream-like vision to which he responded by drawing the blueprint in the sand where he stood.

Elon Musk, Founder of Tesla Motors (2003), Founder of Space Exploration Technologies Corp (SpaceX) and co-founder of PayPal is currently rated on Forbes Most Powerful List with a net worth of over $12.5 Billion and Business Insider recently crowned him The Richest Person in the Car Business.

In the last month Tesla Motors stock price has been as low as $185 to as high as $219 per share as of yesterday but has suffered consecutive losses since September.  The theories swirling around the three month decline include a less-than-stellar first impression of the Tesla D (launched this past fall), ongoing Gigafactory issues and over-valued Tesla stock. From its IPO at $17 per share in 2010, the stock has risen more than 1,400 percent to reach that high in September 2014.

Are EV’s the Future for the Automotive Industry?

Elon Musk and Tesla Motors Inc. have a chance to revolutionize the automotive industry and bring clean technology to the precipice of the future once and for all but it won’t be easy.  History’s innovators are game changers, and game changers don’t subscribe to easy.

Take Henry Ford, the Father of the car business, as an example.  He didn’t invent the car but he revolutionized transportation through the mass production of vehicles and a little something called the assembly line.

Nikola Tesla didn’t invent electricity but his discovery of alternating current revolutionized the way we power our world.  The world’s first large scale generating station at Niagara Falls used Tesla’s two-phase AC techniques in 1895 and the rest,  as they say, is history.

Finally, Tesla Motors didn’t invent the electric car but perhaps they have a shot at revolutionizing EV distribution whereby the global population is afforded access to the technologies that will permit us to live in a cleaner world.