There are formal COVID-19 lockdowns and informal ones. A formal lockdown is when Premier Doug Ford looks into the TV cameras and says, “Stay home for the next 28 days – or else.” An informal lockdown is when your job disappears and you have to stay home and look after the kids. And it gets really interesting when you have to keep coming up with ideas to keep the children occupied.

So you get a blank template of a racing car and suggest to your 6-year-old son that he colour it in. Then you send it to the team that owns the car. The team, Era Motorsport, headquartered in Indianapolis, was so impressed that it used the drawing as the basis of a colour scheme that will be on its No. 18 Oreca LMP2 sports car when it goes to the post a week from Saturday in the 24 Hours of Daytona, a.k.a. the Rolex 24 at Daytona, the first race of the 2021 IMSA WeatherTech SportsCar Championship season.

And that, in a nutshell, is what happened in recent days to the Jason MacEachern family of Whitby. Dad Jason and son Owen are second-and third-generation race fans who enjoy going to Canadian Tire Motorsport Park together, particularly when the IMSA-sanctioned Mobil 1 SportsCar Grand Prix is held in July.

Owen is in Grade 1 at Kendalwood Montessori & Elementary School in Whitby but is home riding out the pandemic with his father, mom Amanda and a younger sister.

Said dad Jason, a laser and pyrotechnician for global special effects companies who’s temporarily unemployed: “It was in the early days of the first COVID lockdown and every night I would go online to see if I could find some activities to keep the kids occupied.

“I got side-tracked – I like motorsports – so I went to the IMSA site and I saw that several of the teams had colouring contests for kids and some came with prizes. I downloaded one and suggested to Owen that he colour it. That was a long time ago, last March. It (the news) came out of the blue about a month ago. I got a call from the team saying that Owen had won, that he’d beaten entries from all over the world.

“They offered us a trip to Daytona. I’d always wanted to go to that race; I have a racing simulator and love to “drive” in that race. Obviously, we can’t go but they’ve offered us Watkins Glen (when IMSA races there in June) so I’ll take Owen there if things ease up.”

In a release, the team said that Owen’s design glowed bright with all three primary colours, transitioning from a blue nose, to a yellow middle body, and a red rear. On the side of the car’s body, the child added a lightning bolt. Jason had sent along a photo of his proud 6-year-old holding his masterpiece.

“It was so great to see so many interesting designs from so many sports car fans and aspiring designers,” said team owner Kyle Tilley. “We hope we gave them something to do during what has been a tough time for everyone. In the end, we reviewed all the images and we knew that Owen’s drawing was the winner.”

Once the news sank in that his design would appear on a professional racecar for the biggest sports-car race of the year, Owen sent the team a thank-you note:

Thank you for this contest. My name is Owen and I am 6 ¾. My favorite things are racing and hockey. I am learning to drive on a racing simulator. I chose this design because I like the colours and thunderbolts and flames are cool.

This was fun because my grandpa, dad, and me all like racing and we were stuk (sic) at home during COVID. 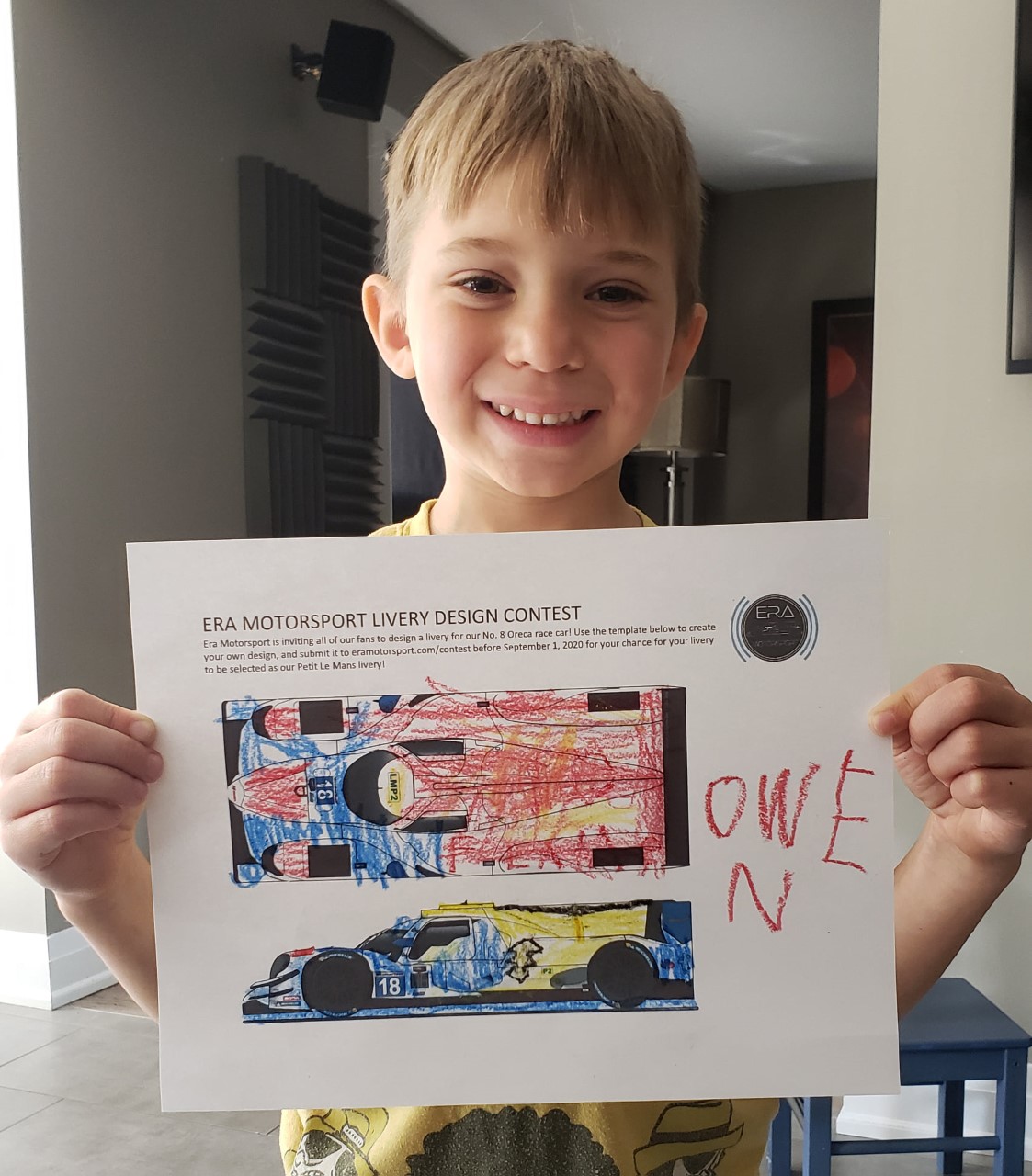 Dad Jason said that he and his son enjoy the IMSA races because they can get close to everything.

“One of the things I love is that you can walk in the paddock and meet the drivers and get autographs and you can walk out on the grid and be out there when the bagpipes parade through. I don’t want to bash NASCAR but you go to one of their races and everything is fenced off and you can’t speak to anyone or see anything.”

I asked Owen if he wanted to drive a racing car when he grew up and, of course, he said yes. “I don’t want to just watch,” he said.

Added Jason: “It’s pretty fantastic of Era Motorsport to do this, to take my son’s drawing and turn it into something that will look fantastic under the lights at a world class race. They’ve done a pretty amazing thing here and everybody should know about it. It’s pretty cool.”

The 59th Rolex 24 at Daytona can be seen on Discovery Velocity Channel, starting at 3:40 p.m. next Saturday. The MacEachern family will be watching.

Norris McDonald is a retired Star editor who continues to write for Wheels under contract. nmcdonald@thestar.ca