What Was Up With that Maple Leaf Audi R8 at Daytona?

It was Audi Canada’s way of announcing it’s officially in the motorsport business.

If you watched the Rolex 24 Hours of Daytona this weekend, you might have seen an Audi R8 LMS GT3 with a huge maple leaf on the side and wondered what the deal was.

There was one Canadian driver in the No. 88 WRT Speedstar entry’s four-driver line-up in the GTD class, 17-year-old Roman De Angelis of Lakeshore, Ont. But the massive display of patriotism was mainly for a different reason: the entry was backed heavily by Audi Canada.

A Canadian arm of a major automaker putting that kind of support behind an American sports car racing program is essentially unheard of.

So, why did they do it? The brand wanted to announce, in a big way, that it’s opened a customer racing sales program.

That means that if you live in Canada and you want to buy a track-ready R8 or RS 3, you can now keep that deal domestic instead of going through the U.S. or Germany. 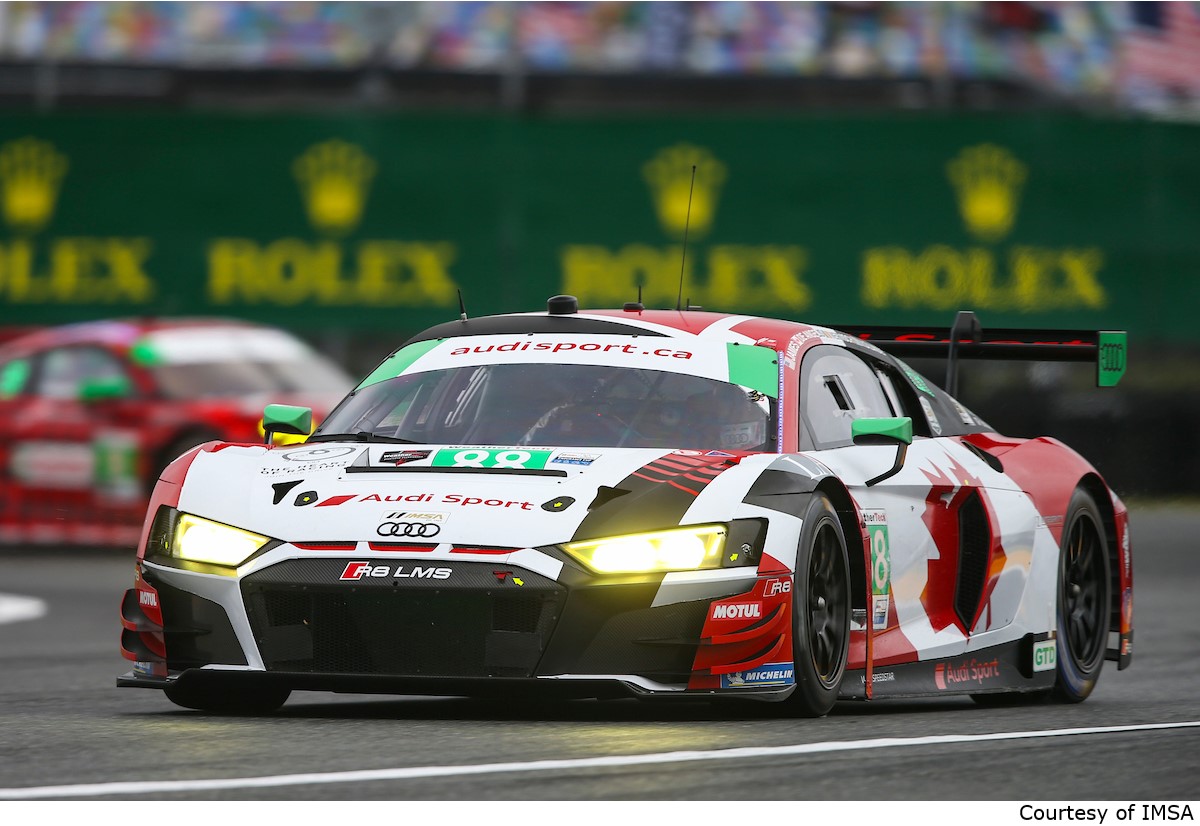 Since the motorsport program was launched last July, seven cars have been sold. That’s about one per month, which is excellent volume for a market of our size. Most of them have been RS 3 LMS TCRs, a track-ready version of the road-going RS 3 that’s got 350 hp and front-wheel drive with minimal driver aids as required under touring car regulations such as those followed by the Canadian Touring Car Championship.

One customer bought a 495 hp R8 LMS GT4, which is closely related to the GT3 version raced in the GTD class at Daytona, and has already competed with it in the CTCC’s GT Sport class.

The RS 3 LMS TCR costs $199,800 including transportation before taxes, and the R8 LMS GT4 costs $369,800. Amelia Li, Audi Canada’s Motorsport Manager, says that while those outright costs are higher than those of other brands that sell products in the same classes and there’s not yet a local parts supply system in place, Audi offers some value-adds that she sees as appealing.

“This is including door-to-door transportation,” Li says. “They just wait, and we deliver like Amazon.”

“I support everything, the contract, signing, payments. And our ordering system is a very smart system, developed by our colleagues in Germany. You have a book, you know your part number. You go there and put your name and password in, and you already have your credit card information in the system and just place the order.”

This is a positive development for those who want to race Audis. But if you think it means there’s a single-make Audi racing series on its way to Canada, don’t hold your breath. There are a handful of those worldwide, but on the whole Audi prefers to test its mettle against more open competition.

“For me, it’s a much bigger value to go out with a GT3 car to win against all these prestigious brands rather than to win my own cup,” says Chris Reinke, Head of Customer Racing for Audi Sport. “Our core business, for sure, is to prove our product against our competition.”

As a result of this philosophy and Audi’s desire to advance it, a whole lot of Canadians were given a phenomenal opportunity at this past weekend’s Rolex 24 Hours of Daytona.

One of them was De Angelis, who with his resume of a win at Daytona in IMSA Prototype Challenge in 2018 and a gold championship in 2017 in the Porsche GT3 Cup Canada was hand-picked for the program.

Going in, the longest he had ever raced in one go was roughly two hours. At Daytona, he did two triple stints of roughly two and a half hours each, both at night, with the new challenge of having faster traffic from other classes overtaking him constantly.

He didn’t have a molded seat insert, so by the end his body was battered and bruised from sliding around and absorbing the G-forces caused by Daytona’s high banks. In the final rain-soaked hours when his teammates took over and all he could do was watch and wait, the previously foreign stress of endurance racing nearly consumed him.

But he and his teammates Kelvin van der Linde and Frederic Vervisch, both Audi factory drivers, and experienced racer Ian James defied the odds of one of the most weather-stricken Rolex 24 races ever to finish 3rd in a 23-car class. 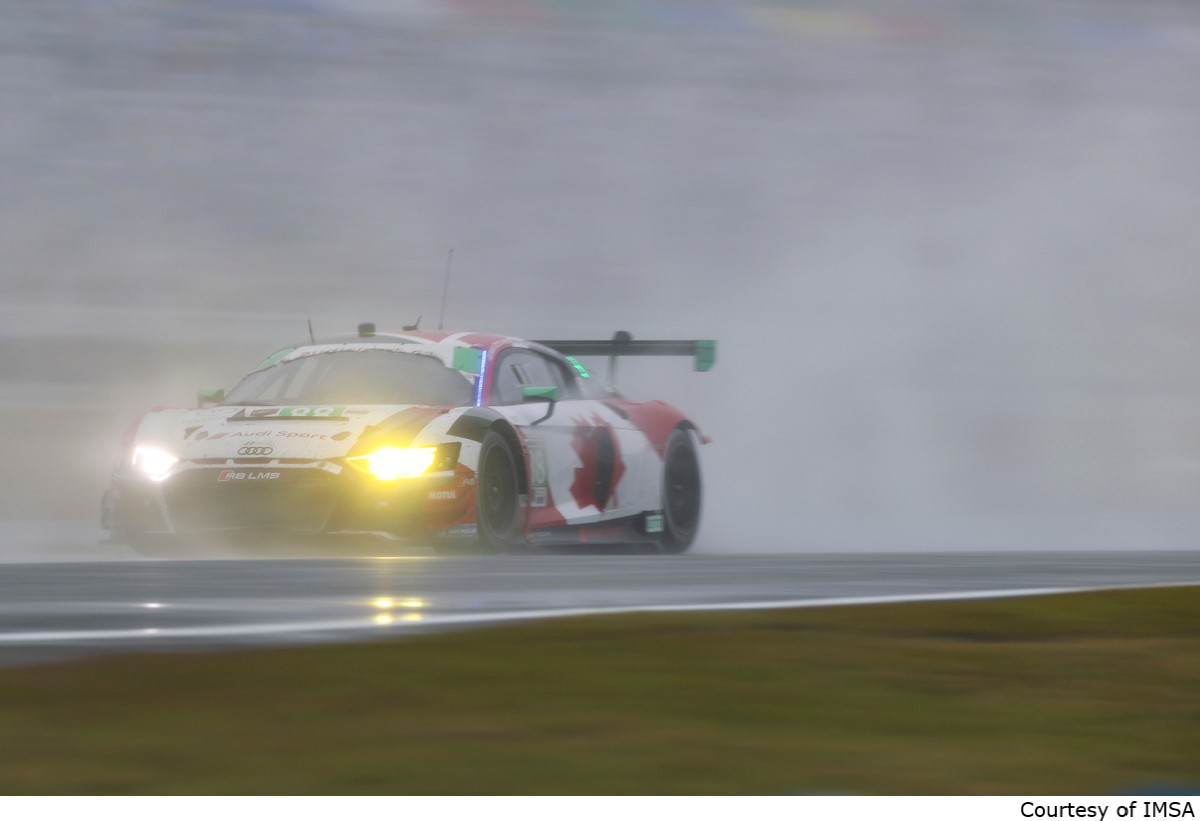 And then, De Angelis boarded a plane for home so that he could write the final exam of his high school year on Monday morning.

Given the circumstances, what stands out about De Angelis today is his maturity, both in his demeanour and around the career-advancing goals he set for himself.

“I didn’t think I was ready for a full season (in the IMSA WeatherTech SportsCar Championship) as I never had the opportunity,” De Angelis said. “But this race and the opportunity Audi gave me proved I am ready and fast enough to fight.”

“I’d like to learn more so I can come here and be more than competitive.”

That’s the kind of attitude that reaps benefits.

Another beneficiary of the program is Speedstar Motorsport, a race team based in Markham, Ont. (Remember that one R8 LMS GT4 that was sold by Audi Canada Motorsport last summer? These guys are the ones who fielded it in CTCC.) 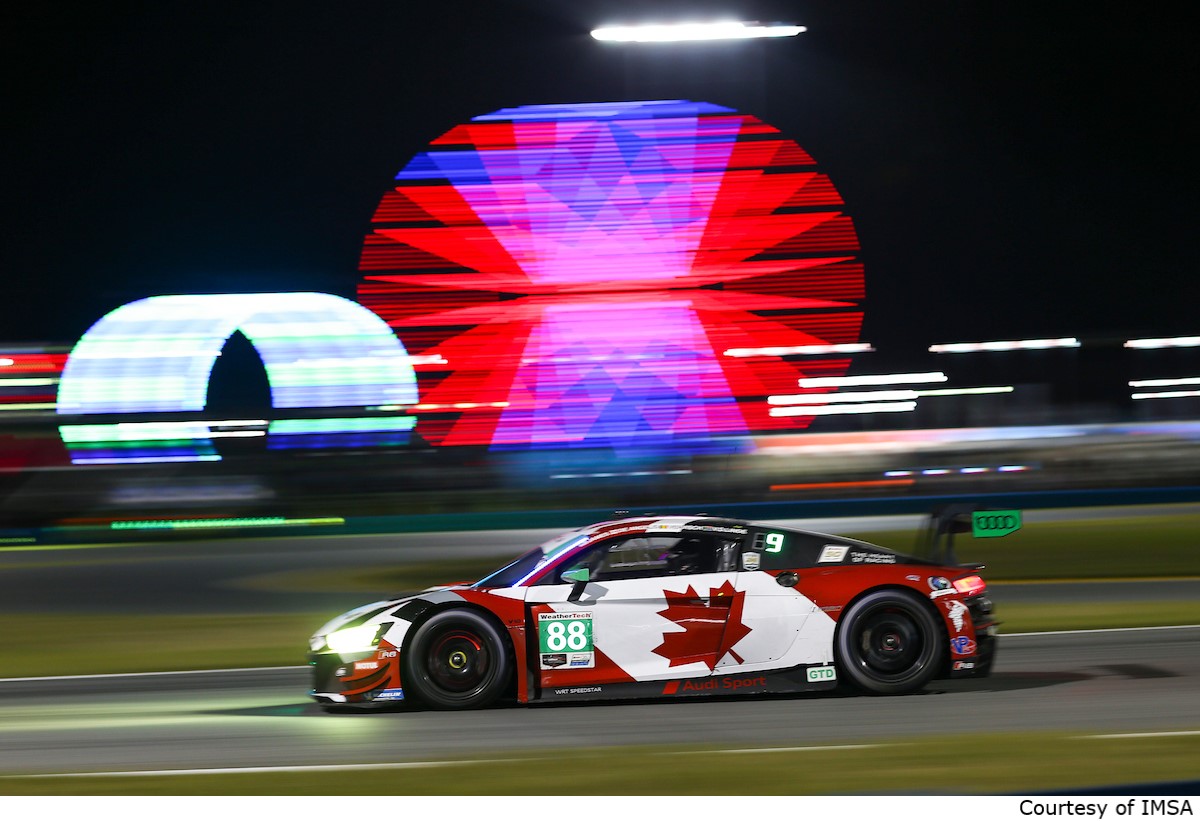 Speedstar has raced for well over a decade in Canada and internationally, but the Daytona program gave them an unprecedented chance to partner with Belgium-based WRT, one of the world’s most successful GT teams racing under the Audi banner.

The collaboration began with a trial run at the Macau Grand Prix in November before all parties landed in the paddock together this past weekend in Daytona.

“Audi inspires us because the way they support is really (like) a family,” says Albert Au, Speedstar’s Team Director. “Their one team, one goal philosophy inspires us (because) it’s very extra-care. It’s a miracle, honestly.”

And does the story end here? Maybe, or maybe not.

It was intended as a one-off deal, a promotional strategy. But perhaps the minds behind the plan didn’t realize how much passion they would ignite in Audi Canada President Giorgio Delucchi.

Establishing a motorsport division was already in motion when Delucchi took the company’s reins in January 2018, but he supported the program enthusiastically. And at Daytona, absolutely nothing could tear him away from the timing monitors. He was so invested in tracking the team’s progress that he stayed up through the night.

So, would he be interested in backing a similar endeavour in the future? He’s not ruling it out.

“Daytona was a very interesting childhood dream for me,” Delucchi says. “I had one Matchbox car that was a Daytona car, light blue. Since then, that was the real meaning of a race (to me). So, being here for the first time with Audi, during my time as President of Canada, is a big thing.”

“Audi Sport is not like in the past, only RS and R models – which we have and we continue bringing, and there are new models coming – but it is also the topic of motorsports. I think the combination of both really makes our activities around the RS and R more authentic.”

“We were very excited to make this a reality.” 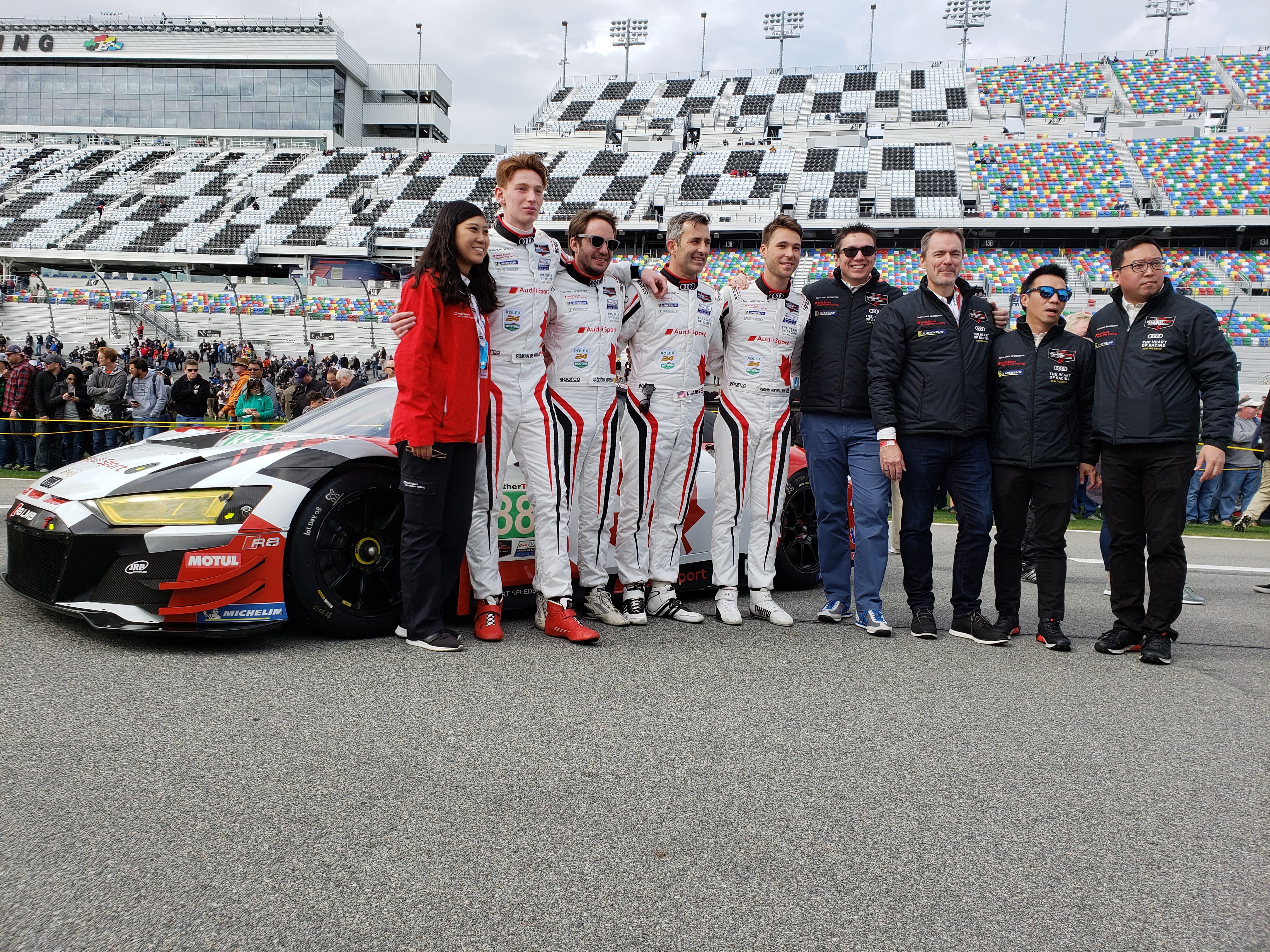 How the rest of the Canadians did at the Rolex 24:

The 2019 edition of the Rolex 24 Hours of Daytona was a story of contrasts: high-intensity racing in the dry, earlier hours, and then several long waiting games through red-flag stoppages through some of the worst torrential rain the event has seen in its 57 years, along with a smattering of high-risk hydroplane-heavy wet laps.

The overall winning team of Wayne Taylor Racing had its victory secured when Fernando Alonso passed Filipe Nasr after the latter ran wide through a very wet turn one, allowing Alonso to add a Rolex to his extensive trophy case, as will his teammates in the No. 10 Konica Minolta Cadillac DPi, Jordan Taylor, Renger van der Zande, and Kamui Kobayashi.

The Canadians in the field had varying outcomes through the event’s ups and downs:

– Daniel Morad was at the wheel of the No. 29 Montaplast by Land Motorsport Audi R8 LMS Evo and was in the lead during the rain-soaked end game, but a slide through turn 1 allowed Christian Engelhart in the No. 11 Lamborghini Huracan GT3 to slip past before the final red flag fell. Morad and his teammates ended the day 2nd in GTD class, but a post-race penalty due to co-driver Ricky Feller failing to be behind the wheel for long enough resulted in a penalty and a 22nd place result.

– Cameron Cassels co-drove the No. 38 Performance Tech Motorsports LMP2 car to a 2nd place finish in the class and 7th place result overall.

– As described above, Roman De Angelis and the WRT Speedstar team finished 4th in GTD class.

– Despite some late struggles by Devlin DeFrancesco in the wet conditions that ultimately didn’t lose him any time, he and Misha Goikhberg along with teammates Rubens Barrichello and Tristan Vautier guided the No. 85 JDC-Miller Motorsports Cadillac DPi to a 5th-in-class, 5th overall finish.

– The No. 9 Pfaff Motorsports Porsche 911 GT3 R was beset with problems all race long: first it was repeat electrical problems, and then Zacharie Robichon encountered an incident on track after the first post-red-flag restart that left him nowhere to go. The crash-damaged Poutine Machine was unable to continue. Robichon and Scott Hargrove, along with endurance co-driver Lars Kern, will regroup for the next race at the 12 Hours of Sebring.

– Problems that persisted from an incident in the No. 51 Spirit of Race Ferrari 488 GT3 in the 16th hour of the race put Paul Dalla Lana and his teammates Pedro Lamy, Daniel Serra, and Mathias Lauda out of the running early. 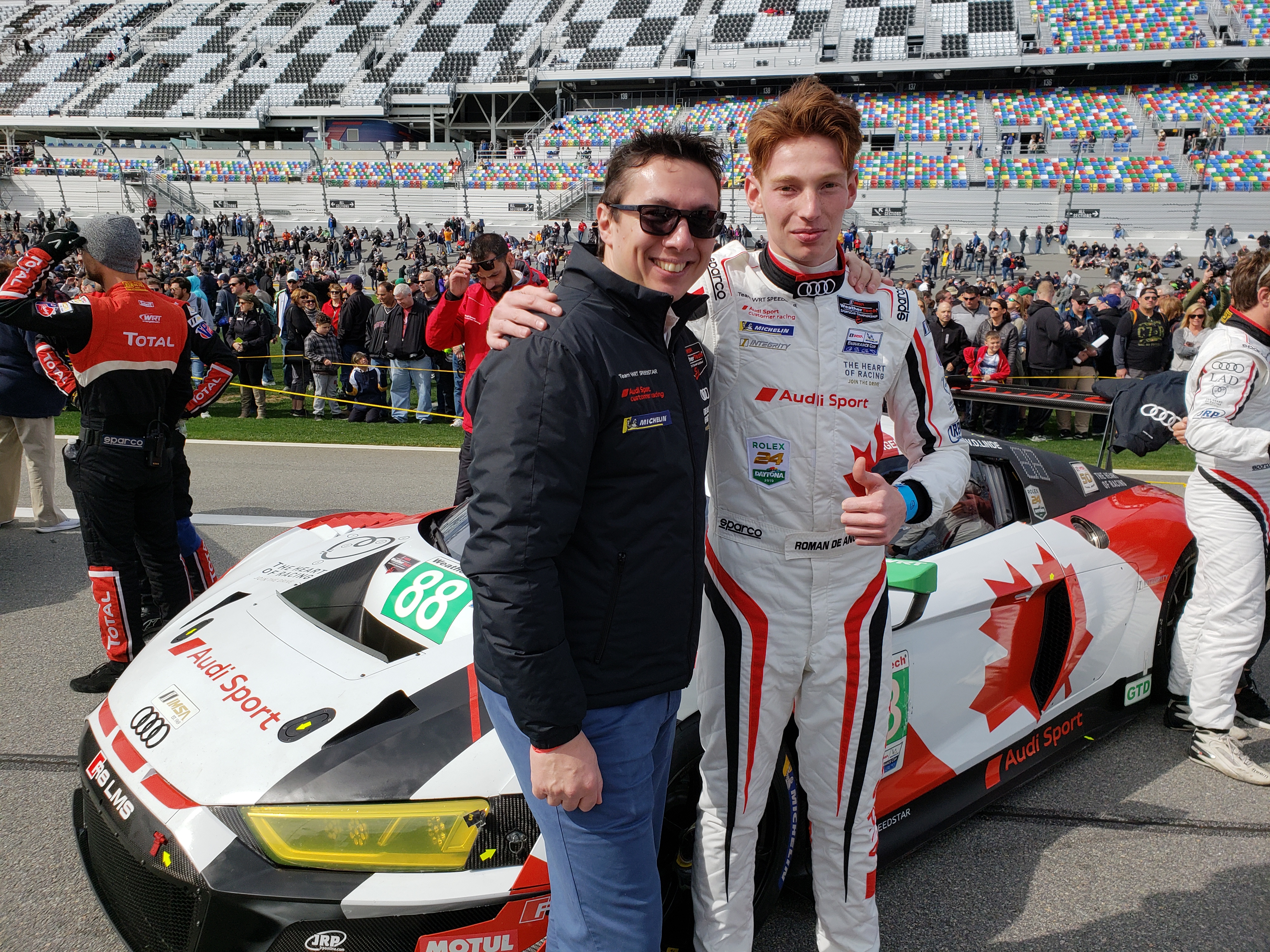 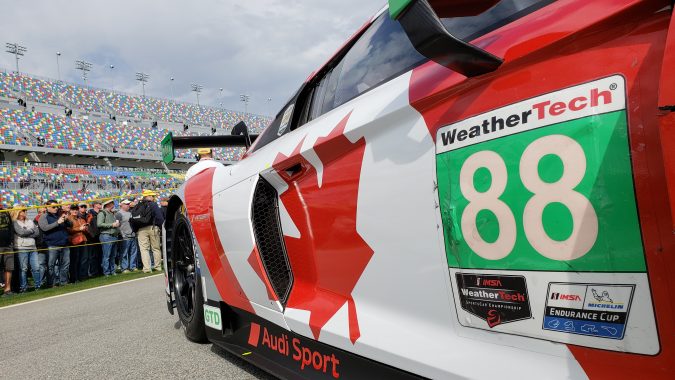 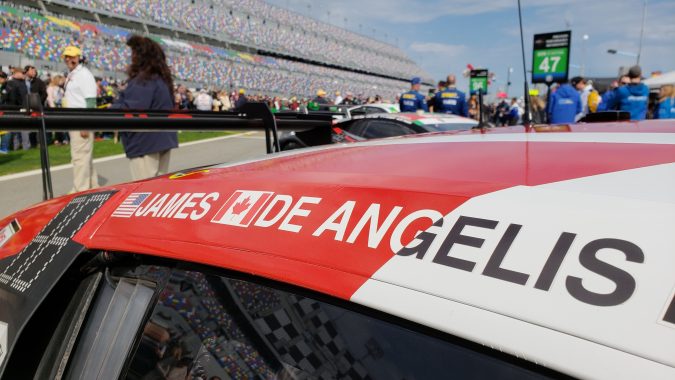 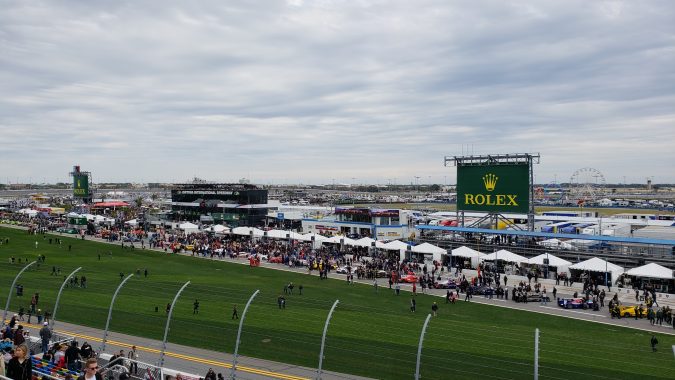 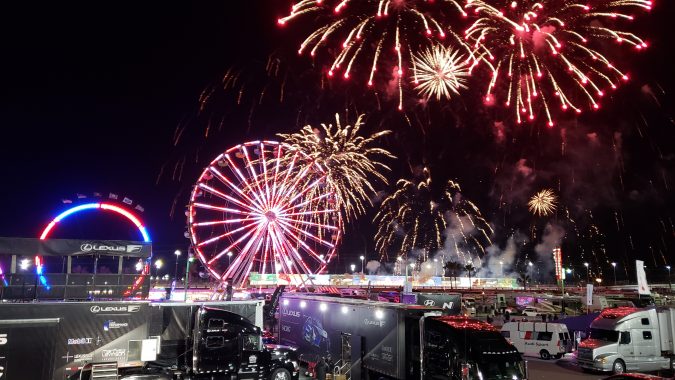