What is the greatest cost of auto ownership?

Recently we sat down with Brian Murphy, Vice President Research and Editorial of Canadian Black Book (CBB), an organization with a 50 plus years history as a viable, meaningful and trusted resource for vehicle values

TORONTO, Ontario – Pop quiz: if you were to be asked directly what you believe is the (single) greatest cost of ownership of a vehicle is, how do you believe you would respond? Fuel? Insurance? Monthly payments? All reasonable answers, to be sure. All involving actual dollars and cents.

Would you have considered depreciation?

Recently we sat down with Brian Murphy, Vice President Research and Editorial of Canadian Black Book (CBB), an organization with a 50 plus years history as a viable, meaningful and trusted resource for vehicle values and additional value solutions for consumers, automotive dealers and resellers, banks, insurer and other appropriate industry sectors.

Earlier this year in conjunction with pollsters Ipsos Reid, CBB conducted a far-reaching survey they dubbed, “Drivers of Automotive Values Poll”. With a relatively high sampling of 1,004 respondents from across this country, the reach and success from an information and statistical data standpoint is such that the intent would be to continue with this poll on an annual basis.

Some of the results, although surprising, proved statistically accurate due to the size of the sampling model.

Going back to the question on the table for a moment. For this one question, 29% stated gas/fuel, while 33%, that’s fully one third, responded with insurance.

The correct answer is… depreciation.

Would you be surprised that only 1% of all respondents correctly identified this as being the greatest cost of vehicle ownership?

Chances are that the majority of polled individuals would now, after the fact, likely proclaim, “Right!” with a resounding slap of “I-should-have-known-that” to the forehead.

Murphy, was not astounded. Surprised, perhaps, but not unexpected. ”That one answer tells us clearly that there is a disconnect, a perceived information gap where most buyers of new cars seem to be making the wrong assumptions on the types of expenses that have the greatest impact on the actual cost of owning a vehicle.”

To CBB this reinforces their opinion that they can, and must do better as that trusted resource for consumers – become top of mind – and not necessarily an afterthought.

“With that one answer, 90% of Canadian drivers failed to identify the single greatest cost of vehicle ownership. 90%. Within the 18-34 year old demographic a resounding zero percent (0%) selected depreciation while 76% incorrectly believed that gas/fuel is the single largest expense.”

How did this come about?

CBB wanted to take the pulse of the buying public and determine if, at a time when the sale of new vehicles was hitting all-time peaks in this country: would the upward trend continue?

The results and conclusions from this deep poll revealed an affirmative response. According to Murphy, it would appear that the trend for sales will continue across the board. “In fact,” he stated, “there appears to be a pent-up demand on the horizon for Canada’s new and even the pre-owned vehicle market.”

As a result of their research, fully 50% of Canadians say that they are “likely” (that’s 21% very likely and 29% somewhat likely) to buy a brand new or used auto at some point over the next 18 months. Great news to auto manufacturers, dealerships and independent shops – to say nothing about the broad smiles on the faces of ancillary business, such as all manner of garages offering maintenance and service, tire and oil change outlets, part stores – you name it; if there is a connection to the automotive sector, they stand to see their business pick up.

Surprisingly, it would appear that millennials appear to have a greater desire to purchase than most: six in 10 Canadians aged 18 – 34 will be prowling dealerships, web sites and want ads, eager to part with their hard-earned money for some form of personal transport. Yet, within this same demo, 80% have never experienced the trade-in process first hand.

In fact, in spite of available on-line resources from CBB and others, Canadians would appear to be ill-informed about the potential value of their trade (if, in fact they have a car to trade against). This far-reaching poll demonstrated that 82% believe that they, as consumers, are on their own when the time comes to trade: they are unaware that this information is readily available and is not, as imagined, available only to dealerships on a proprietary basis who use this data to take advantage of consumers come trade in time.

Consequently, since most believe that the information flow is one-sided, 33% of Canadians have a hard time accepting any dealers’ evaluation of their vehicle when offered for trade in.

This results of this poll are, to Murphy and his team, not surprising. Respondents recognize that the availability of comprehensive data on buying and selling automobiles from a source such as CBB makes infinite sense.

There are still, 50 years later, some obvious “disconnects”.

Let’s come back to depreciation. You proudly ink a deal to purchase a car with a MSRP of, say, $40,000. In the very first year of ownership, that magnificent steel, vinyl, rubber, and carbon fibre machine will lose, or cost you $16,000 in actual depreciation. That’s $16,000 off the actual value of that auto. Almost $44 a day. Subsequent years see that number reduced to $10 per day.

Murphy concedes that it’s entirely possible that the key factor when making a new vehicle purchase has less to do with the end value of any car – than the affordable monthly payment. Show most consumers an impossibly low financing rate over a barely acceptable time frame and that’s where the so-called magic number may well lie – not 40% shaved off their chariot’s value almost as soon as they hit a municipality’s road after driving off a lot.

Murphy and Canadian Black Book would much prefer that Canadians be more realistic in purchasing a new or pre-owned automobile.

“They need to be better prepared, be better educated in the ways of auto purchases and financing – all sides. And that’s a job for us here at CBB. Life generally would be so much better if consumers were better informed. Let’s look to next year for a change in the overall result: let’s see if Canadians will become more aware.” 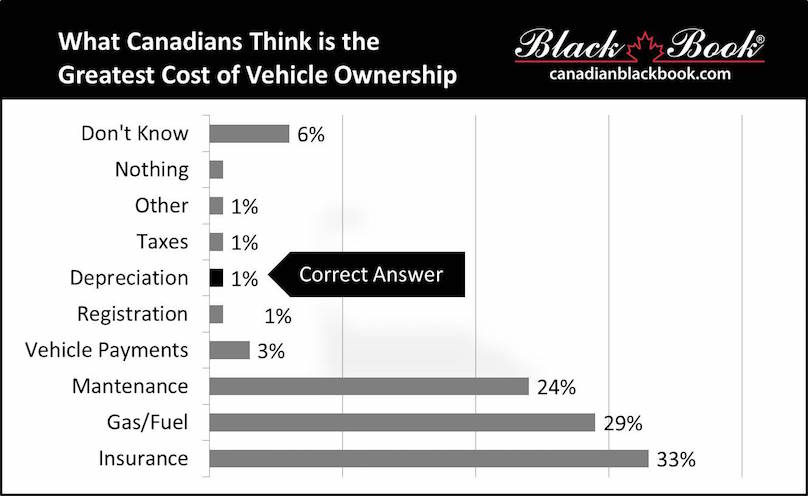 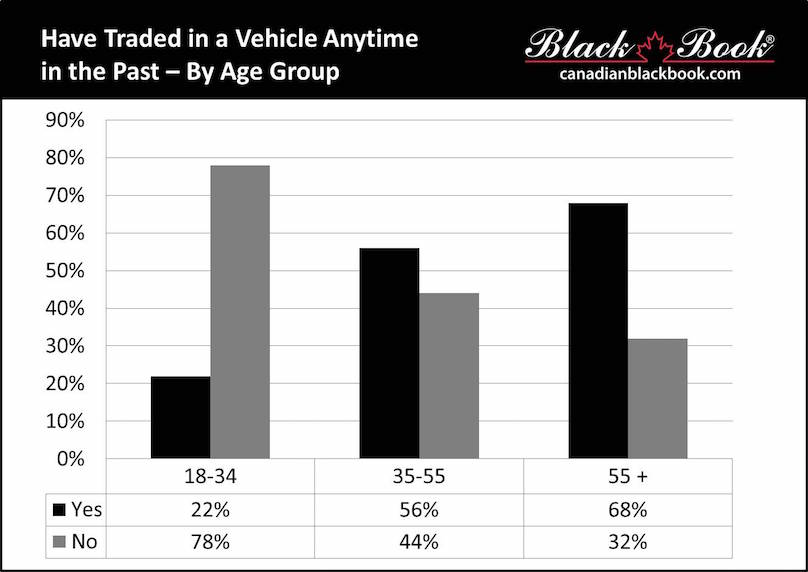 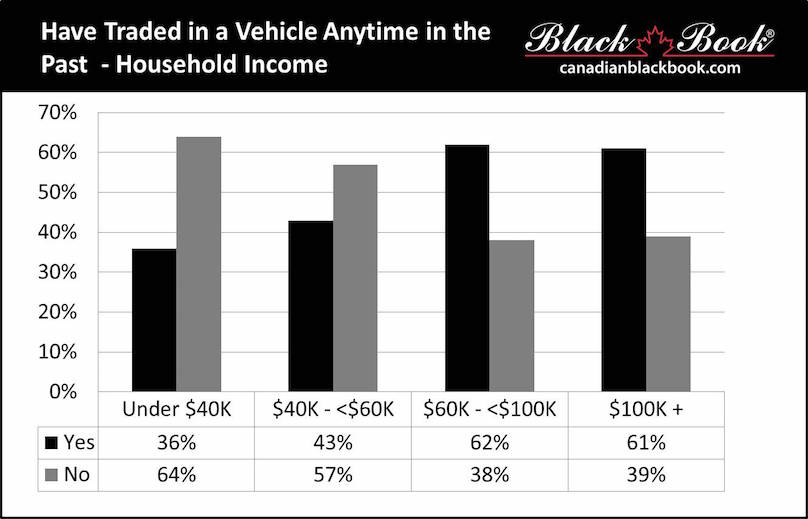 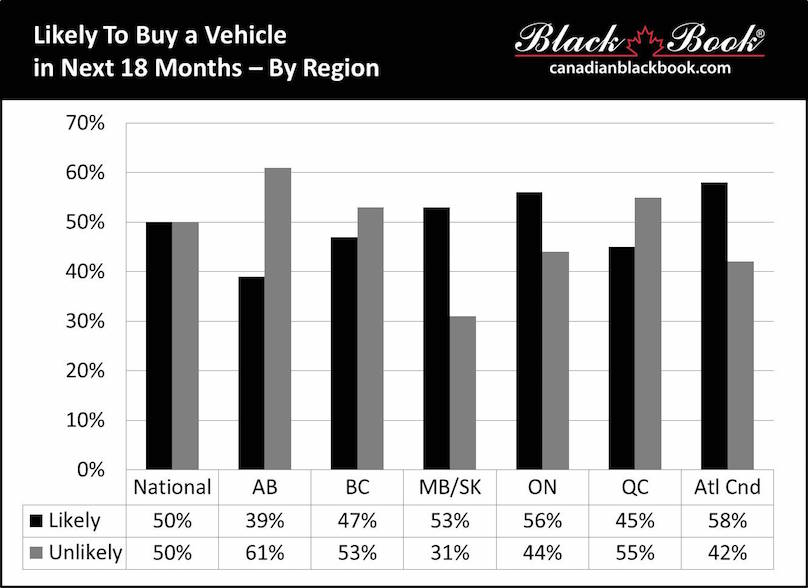 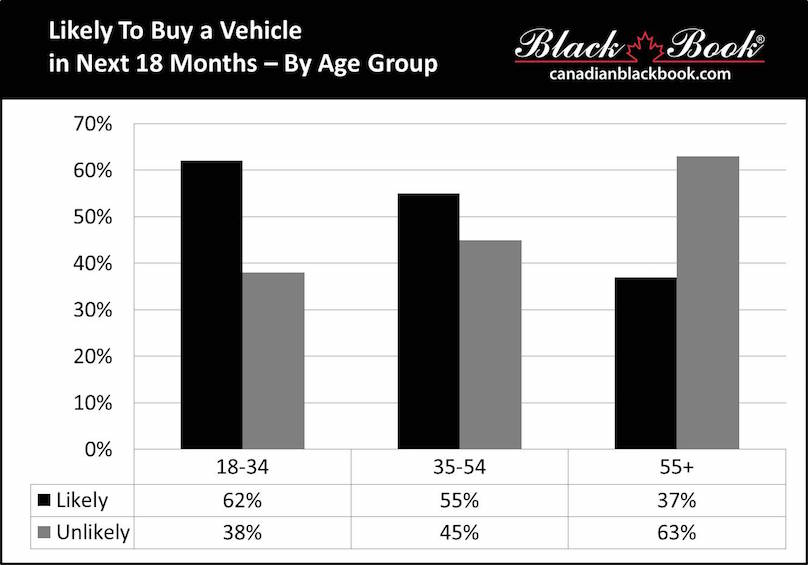 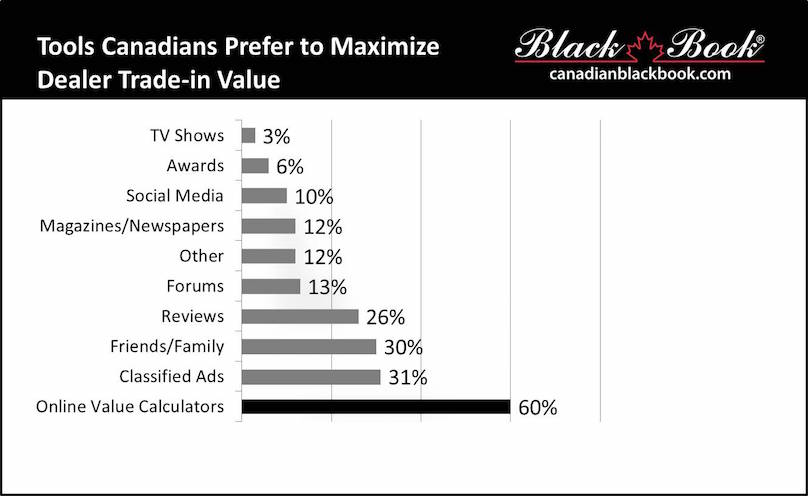 Check out our new Total Cost of Ownership Tool