After years of being told about the superiority of German engineering, you might be surprised to hear how car buyers in Germany rate their own products. Here’s a hint: They’re not at the top of the heap.

Consumer research firm J.D. Power released its 2018 Germany Vehicle Dependability Study recently, which tallies problems experienced by original owners of vehicles sold in Germany after 12 to 36 months of ownership. What is eye-opening is how Germans rank their homegrown brands in comparison to import automakers such as Toyota and Hyundai.

As it does in its closely watched U.S. study, J.D. Power expresses dependability as the number of reported problems per 100 vehicles (PP100); the lower the score the higher the reliability. The study examines 177 problem symptoms across eight categories: vehicle exterior, interior, driving experience, controls/displays, infotainment systems, seats, heating/air conditioning and powertrains.

While it sounds trivial, fussy infotainment and navigation controls can sour an ownership experience pretty quickly, though buyers tend to reserve their biggest criticisms for engine and transmission problems. More than 14,000 vehicle owners were surveyed – a smaller sample size than in the U.S. studies, but there’s enough rigour applied to yield statistically valid results.

Toyota is the automaker with the fewest number of reported problems in Germany this year, with a score of 101 PP100, presenting 25 per cent fewer problems than the German-market average (133 PP100). Spain’s SEAT, a subsidiary of Volkswagen, ranked second and tied with Volvo, followed by Skoda (VW’s Czech division) and Hyundai.

The highest-rated German brand was Mercedes-Benz at eighth, while Volkswagen ranked just ahead of the industry average. Audi and BMW languished in the ratings basement alongside Fiat, a perennial bottom-dweller in many quality studies. 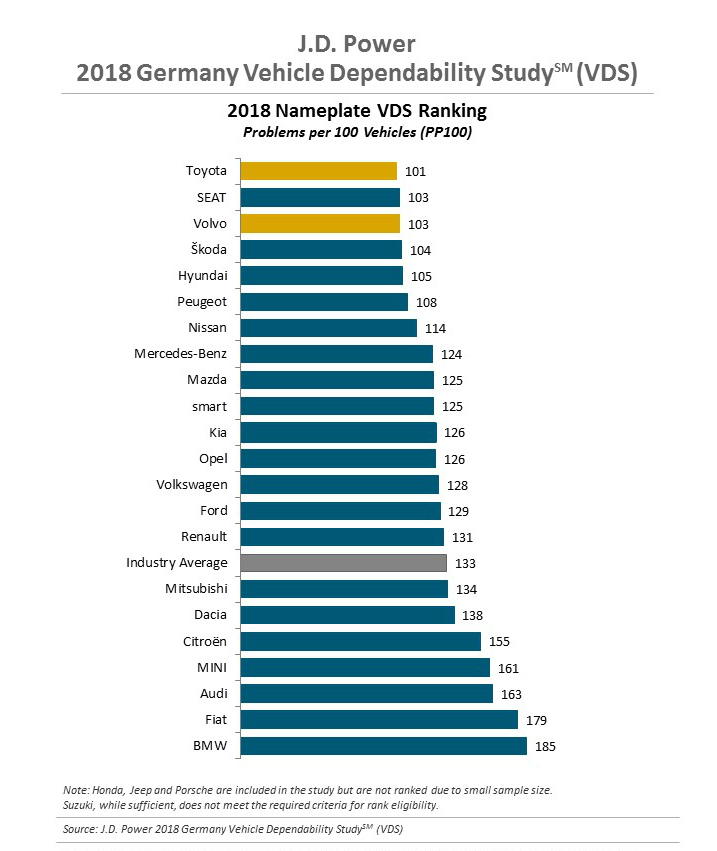 This is only the fourth year J.D. Power has conducted its vehicle dependability study (VDS) in the German market. Its inaugural study in 2015 revealed Mazda as the most reliable brand, followed by Mitsubishi, Skoda, Dacia (Renault’s Romanian acquisition) and Toyota.

Volkswagen habitually resides close to the industry average, while the remaining big German brands rate below average. The lone exception in the 2015 study was Porsche, which ranked ninth from the top.

“The ratings are not surprising,” says Phil Edmonston, the Canadian consumer advocate and author of the long-running Lemon-Aid books that examine the best, and worst, new and used vehicles.

“There has never been a relationship between cost or innovation and dependability. In fact, a case could be made that there is an inverse relationship,” he says, suggesting that the more you spend on a vehicle, the more headaches you potentially incur.

Edmonston points to Tesla’s low ratings from Consumer Reports, in addition to the poor showing by Audi and BMW in the J.D. Power studies as evidence. At the other end of the scale, relatively simple economy cars like the Toyota Yaris and Mazda 3 are noted in the Germany study for their high dependability scores.

Last year, the Hyundai i30 – what Canadians know as the Elantra GT hatchback – was crowned the most reliable car in Germany with 72 problems per 100 vehicles, which earned a headline in widely read Auto Bild magazine. This year, it was the Mazda 3 with just 63 problems.

J.D. Power’s vehicle dependability study of the United Kingdom market reinforces the notion that premium models are more problematic. The top 13 manufacturers in the 2018 UK study are all mainstream brands, with Hyundai ranking highest with a score of 78 PP100. Suzuki finished second with 87 PP100, followed by Kia with 94 PP100. Mercedes-Benz (124 PP100) was the highest-ranking premium brand, slotted 14th overall. 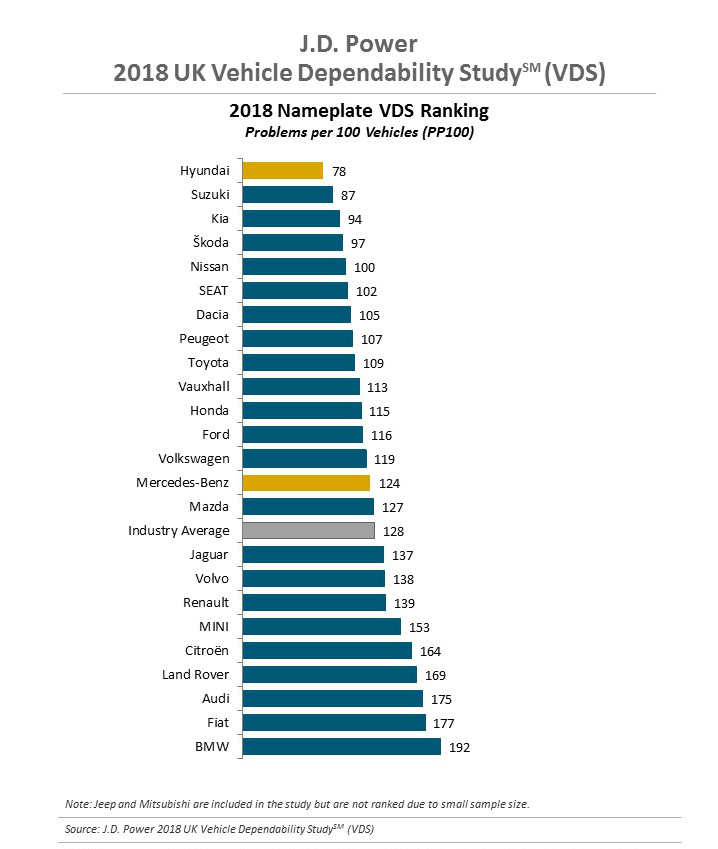 The North American and European auto markets are quite different, of course, which makes comparing dependability studies a little misleading – though there is evidence the two markets are growing more alike.

Traditionally, old European cities with narrow streets that lack parking favour smaller vehicles, and the steep price of fuel – currently more than $2 per litre – has also compelled Europeans to drive more efficient vehicles. There’s been a long-held preference for diesel engines, though that predilection is changing.

“It was more than 50 per cent for diesel one or two years ago, but (demand) went dramatically down,” says Mark Lendrich, head of research at J.D. Power Europe, located in Munich, Germany. He attributes the sudden decline in sales of diesel powertrains to Volkswagen’s “Dieselgate” emissions-cheating scandal. Two-thirds of vehicles in Germany today burn gasoline, not diesel, according to the European Automobile Manufacturers Association.

Another mitigating factor is the growing concern over excessive diesel nitrogen oxide emissions impacting life expectancy. It is estimated at least 38,000 premature deaths due to heart and lung disease and strokes occur annually, mostly in Europe, where highly polluting diesel cars are the main culprit, and in China and India, where dirty diesel trucks foul the air.

With public health researchers sounding the alarm, some city councils in Germany are planning to ban diesels altogether. There is growing interest in gas-electric hybrid models like the Toyota Prius and fully electric cars like the Nissan Leaf, which do not differ appreciably from their North American versions.

Other market differences remain: More European drivers favour manual transmissions and, as Lendrich points out, Germans have a penchant for station wagons. For example, more than 70 per cent of VW Passats sold there are wagons. He also notes the way Europeans purchase vehicles differs, too. 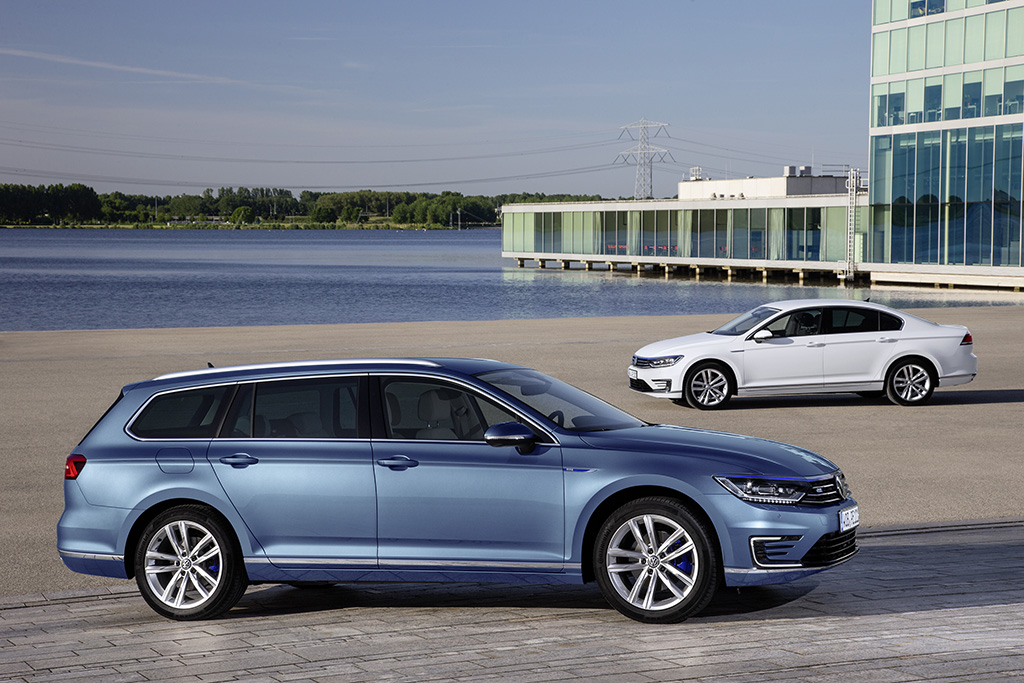 “European customers go to a dealer to configure a car and order it, (then) wait for a couple of months until it gets delivered,” he says, largely due to the fact that there’s little land available for dealer inventories. Lendrich also observes that European drivers are more focused on technology and performance, while North American buyers look for comfort and convenience features.

Still, dependability is a major factor all auto shoppers consider as part of their vehicle purchase decision, regardless of which side of the Atlantic they reside on. Edmonston notes that dependability studies work best when they probe motorists after three years of ownership.

“They are better indicators of dependability and performance. If you mix in shorter periods for ratings, you are really measuring dealer service quality, which may vary considerably.”

The takeaway from J.D. Power’s European studies appears to be a universal one: The less you spend on your next vehicle, the happier your ownership experience may very well be.