What Canadian Car-sharers Want, According to Turo

In a pandemic world, Canadian vehicle borrowing habits have changed

The COVID-19 era has been a bloodbath for various car-sharing companies in Canada, with the departure of GM-owned Maven, Car2Go and at least outside of Ontario, ZipCar, leaving Communauto and Turo battling it out for car-sharing supremacy in the Canadian market.

Both are expanding their respective Canadian areas, with Communauto announcing its arrival into Calgary in late August, and Turo a much more aggressive expansion into B.C. in June, with 65,000 reported users in B.C. that had already registered by the time it launched there. But with over 900,000 Canadian app users, Turo’s service is the largest and fastest growing car sharing service by far, with more vehicles than the others combined, said Cedric Mathieu, head of Turo Canada.

Turo is different from Communauto or other car sharing platforms because it is a peer-to-peer network, an AirBnb-type service where private owners offer up their personally owned vehicle on the app to renters, who can borrow it for days or sometimes weeks at a time. And with this large swath of available vehicles and a sudden drop in U.S. and international visitors to Canada that used to be a key market for Turo Canada, the type of vehicles that now mostly Canadians have been renting on Turo provides a unique look into what Canadian car-sharers want, in a pandemic era.

The five most booked vehicles are familiar sights on best-selling new vehicle lists, minus the pickup trucks and SUVs, surprisingly: 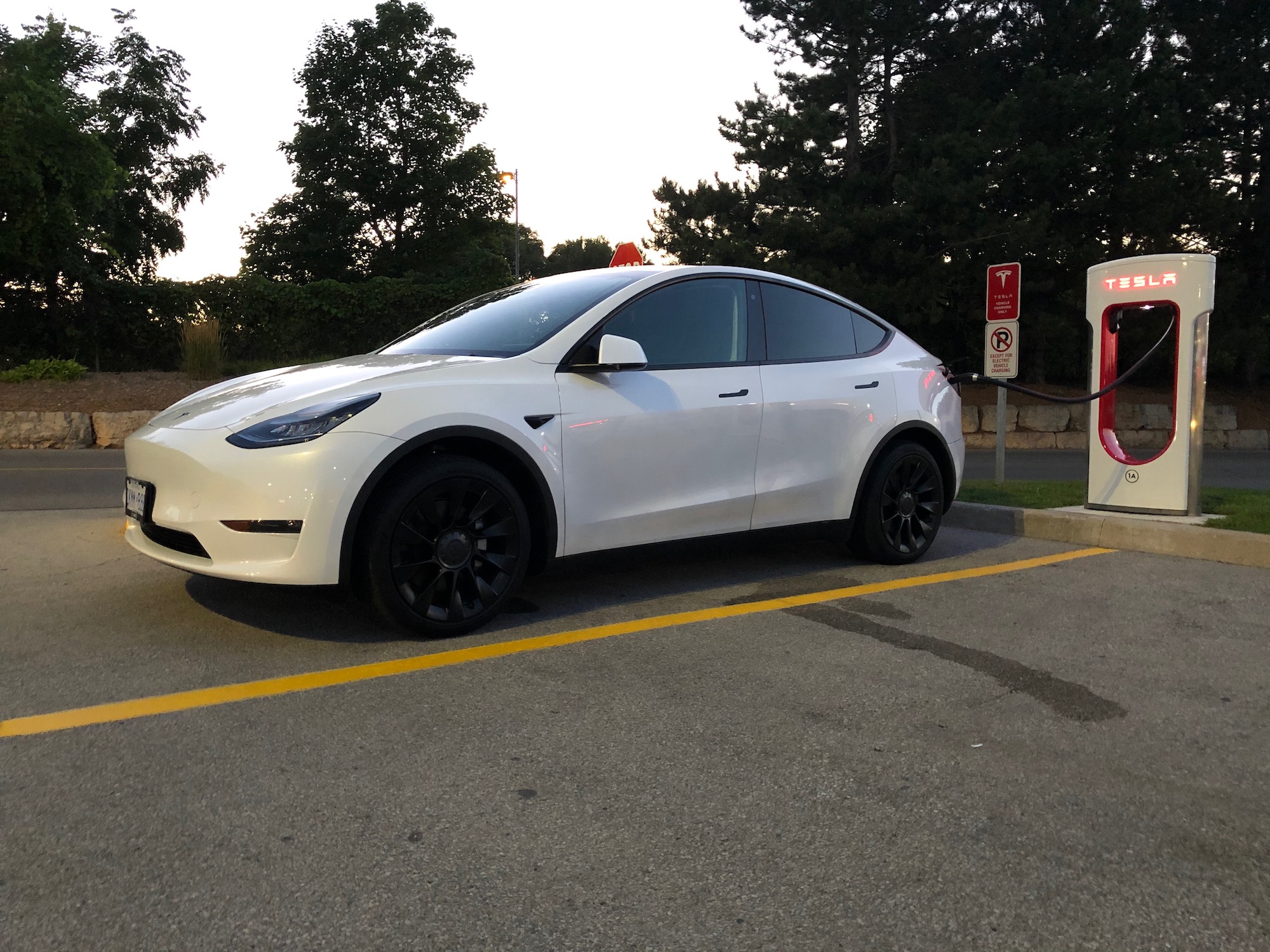 “The most booked cars are usually cars are very functional and very economical,” said Mathieu, noting the popularity of the Grand Caravan right from Turo’s launch in Canada in 2016, thanks to its relatively large size and reasonable price.

Toronto is still one of Turo’s top three cities in terms of overall trips taken, behind only first place Los Angeles and then London England in July, even though it took a major hit earlier in April, with overall trips down roughly 90 per cent. But the lessening of international travellers has been balanced somewhat by a 25 per cent increase in local bookings, he said, and with a higher proportion of local drivers booking vehicles to help them explore their own province, the average length of the trip is starting to fall.

There may also be an economic incentive in play here for drivers who have either lost their jobs, or are working at home and not using their vehicle nearly as much. Turo’s business model incentivizes drivers to offer up their vehicles while the company provides insurance and the technological platform to connect drivers with thousands of potential car sharers. Which is really a misnomer, as there’s no unpaid ‘sharing’ happening here, but is the general term used to help differentiate such services from the traditional rental car companies and their corporately-owned or leased fleet vehicles.

Turo said over the past year, the average vehicle ‘host’ earned $750/month and shared their cars for an average of 10 days, though that figure varies depending on the cost of running a car in each market, the number of available vehicles in each market, and the cost of the vehicle itself.

For example, Calgary’s smaller fleet of ‘hosts’ tended to offer more expensive vehicles, versus the wider range of vehicles in Toronto and Montreal, which is reflected in the average monthly earnings and number of days shared in each market, according to Turo figures: 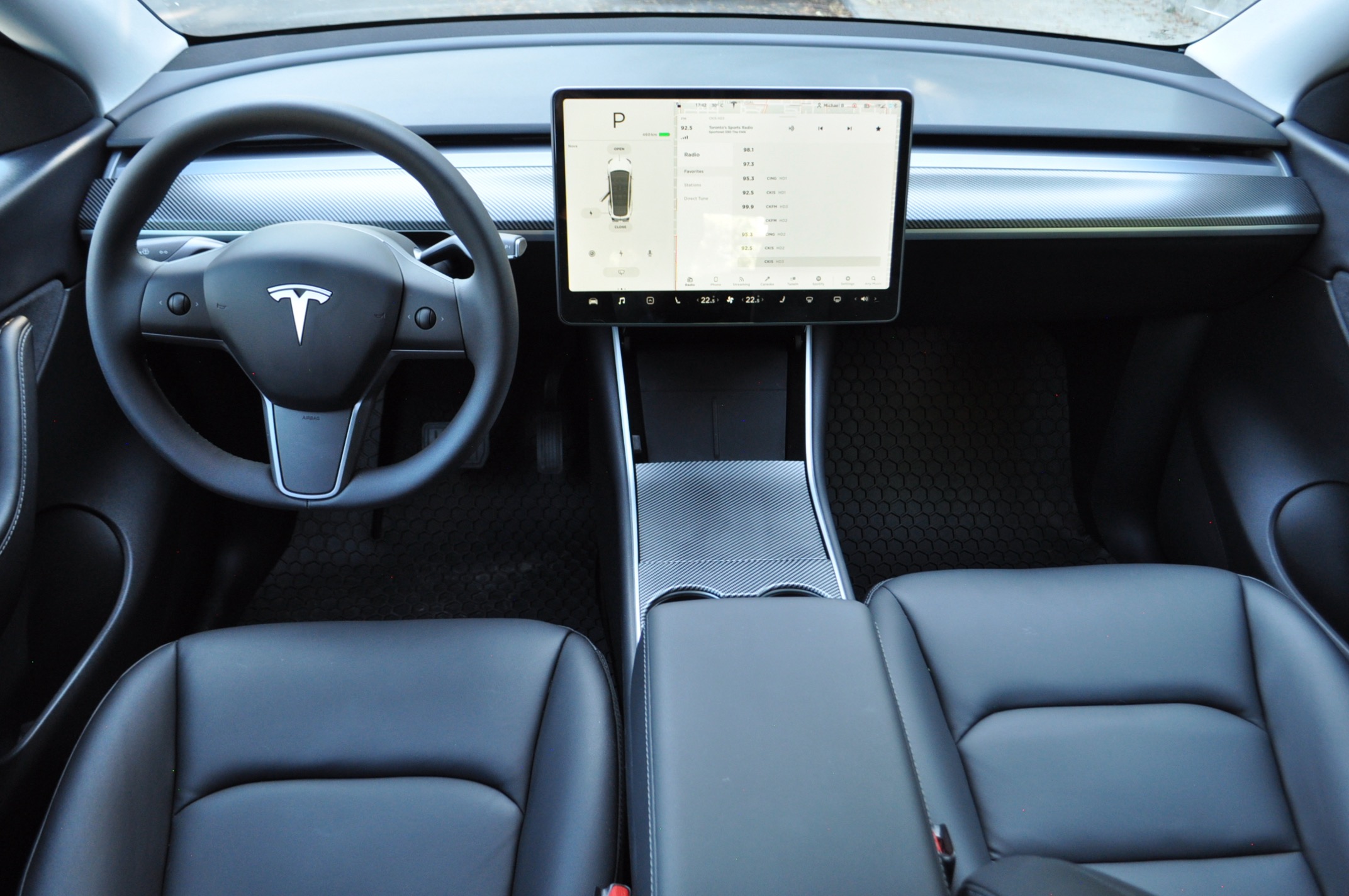 “It’s enough to pay for the car itself for most vehicles,” said Mathieu. “For luxury vehicles, the costs are recouped even faster.”

Looking at the most popular of these high-end luxury machines, it’s clear that the top five “grossing” vehicles per month on the platform are much more German, and much more electric: 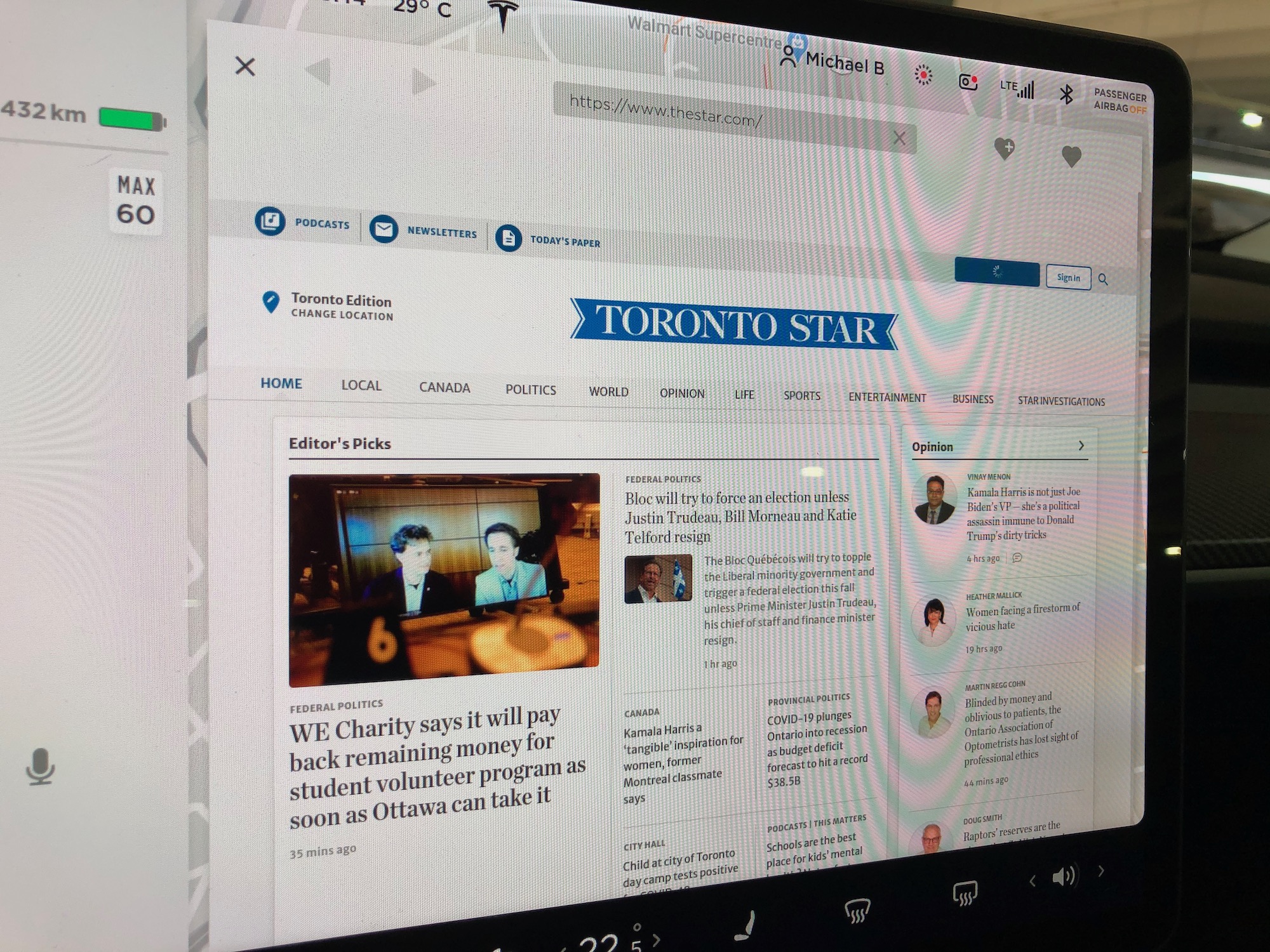 “It’s quite a shift in how people think about car ownership,” said Mathieu, acknowledging that it may not be comfortable for every driver now. “But Teslas were (sometimes) paying for themselves in six or seven days.”

It’s these more unique or higher-end vehicles that attracts another significant slice of customers to Turo, as these vehicles aren’t available through most regular rental car companies or urban fleet-sharing services. It’s also a way to test drive vehicles that even dealers may not have available for test drives yet, said Mathieu, citing Tesla advisors who have suggested Turo for folks looking for a test drive when demo models are not available.

“That’s true for EVs, but also true for other cars – sometimes folks have their eyes on a certain make and model, and they want to see if the car actually fits in their lives over an extended basis.”

That was certainly the case recently when the only way I managed to arrange a test drive of the hot, recently-arrived Tesla Model Y crossover for an article was through Turo. Tesla very rarely makes press vehicles available in Canada, unlike most other automakers, and no Tesla retailer had a demo model in mid-August to allow even for a short test drive. Even less so for one that was available for multiple photo shoots, or drives loaded with family members, and charging it multiple times, at home as well as at various Superchargers.

This particular Model Y Long Range AWD was the first Y on Turo Canada, according to its listing, and had an as tested price of $74,880. But per day, it’s listed on Turo at roughly $265/day – a little bit more on weekends, and a little bit less for trips of three days or more.

As expected, it performed very much like its popular Model 3 sedan sibling, but adds a notably larger and more practical crossover body, standard AWD, the heated steering wheel that’s somehow still not an option on the 3, and the first-ever heat pump in a Tesla, which should make the Y lose the least amount of winter range of any Tesla – even compared to the six-figure Model S sedan and gullwing Model X SUV.

The number of things this Y can do that non-Tesla vehicles can’t is incredible. Like Sentry mode, which video records your car’s surroundings using cameras integrated throughout the body whenever it’s locked – not constantly, just every time someone approaches, even at night, allowing playback on the massive 15.4-inch screen of every curious raccoon or miscreant to approach the car. Or allow you to browse the Internet as you’re driving along alone, on the highway. Or when you’re parked, you can use the steering wheel to play racing games on that huge screen. Or create and play music. Or digital art.

Or to make fart noises. With multiple versions, emanating from any seat location, triggered in various ways, including with every touch of the turn signal. In your new 80 grand Tesla. 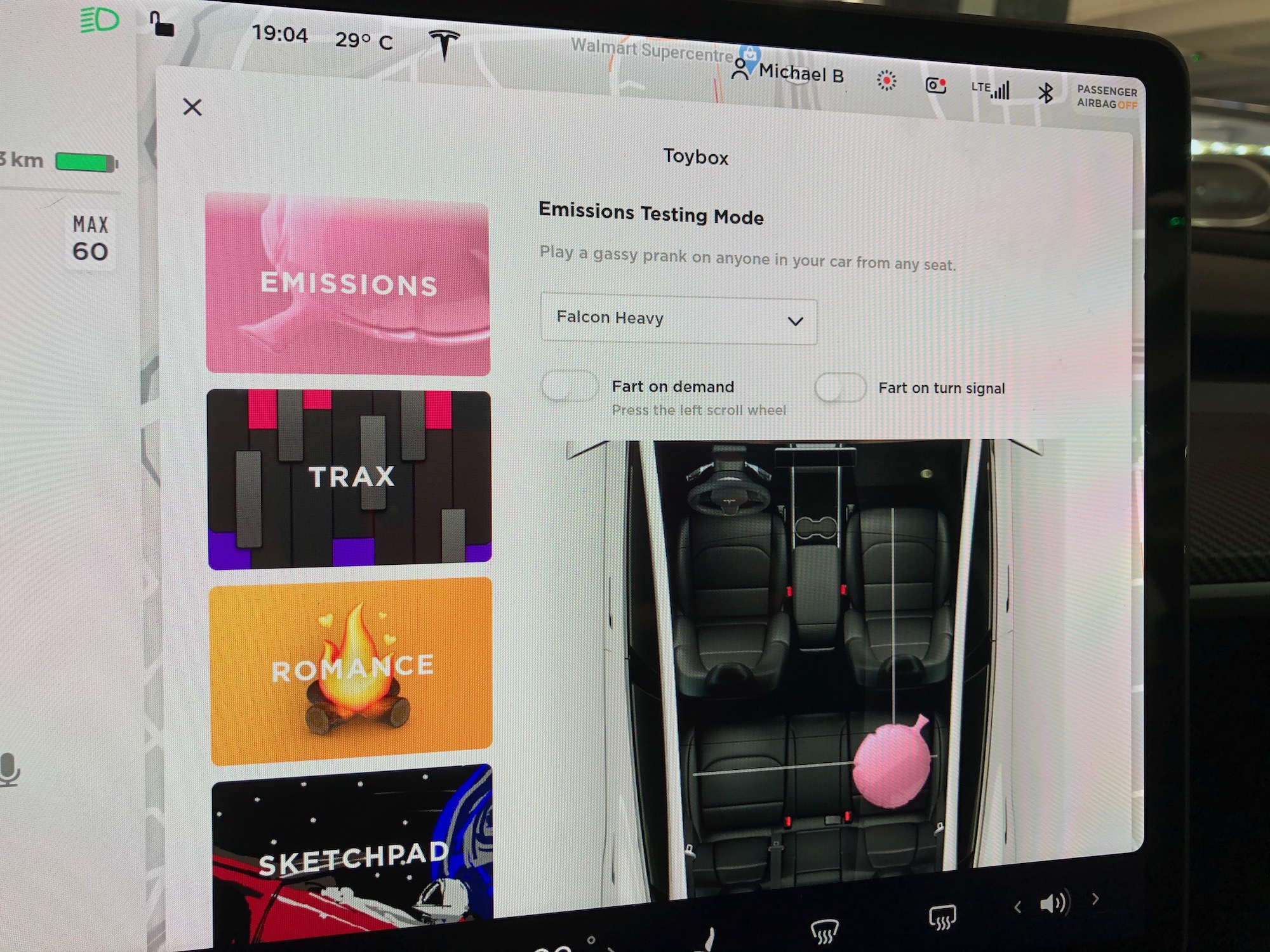 The electric vehicle brand not only boasts the top-selling EV model in Canada with the Model 3, but also clearly holds major appeal amongst renters looking for an electric vehicle, as well as hosts willing to lend them out. Tesla models in fact sweep the podium for most Turo EV trips taken in Canada:

And there’s a major drop off in the number of trips taken with the Leaf and the i8, noted Turo.

In the end, COVID-19 put a dramatic hit to the industry and the company itself, prompting new sanitization training methods for all Turo hosts and extra precautions, it’s fascinating to see the difference in what buyers are renting, versus actually buying. And while this used to be a leasing versus financing question, the (occasional) rise of car sharing services such as Turo suggests the company certainly has stemmed the losses that may have thwarted its long-term expansion plans in Canada. 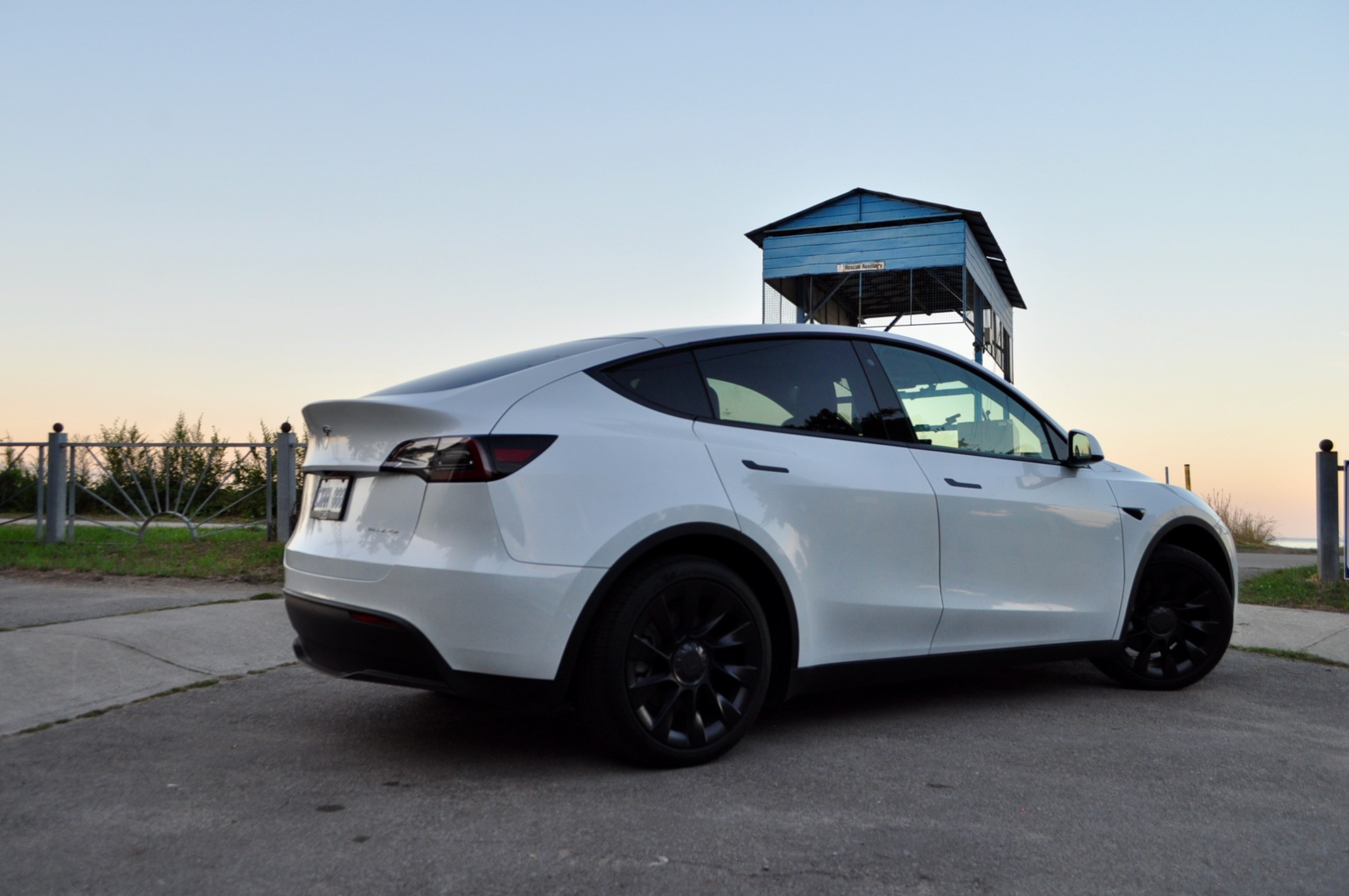