Wearing their art on their cars in Houston

What started with a couple of thousand spectators watching 40 cars drive by in 1988 in Houston, Texas, has grown to 315,000 spectators watching 250 entries from all over North America, Mexico and the U.K. “Of course you decorate your car, otherwise you look like everyone else.”

HOUSTON, TEXAS—As you drive into Houston, passing under elaborate, almost beautiful concrete trails that whisk traffic off to some of the nearly 1,000 kilometres of freeways in the area, it is abundantly clear this is a city that loves its cars.

But Houston has perfected more than the art of the overpass. As the highway widens and the traffic thickens, if you pay close attention, you may spot the Map of Space and Time scoot by.

Rebecca Lowe’s 2009 FX Honda is one of the beloved art cars driving among the millions of vehicles on the road in Houston.

“Of course you decorate your car, otherwise you look like everyone else,” Lowe explains as she points out the word “faster,” a tiny tank, a Houston ring road and other treasures in among the swirls of colour on her car. 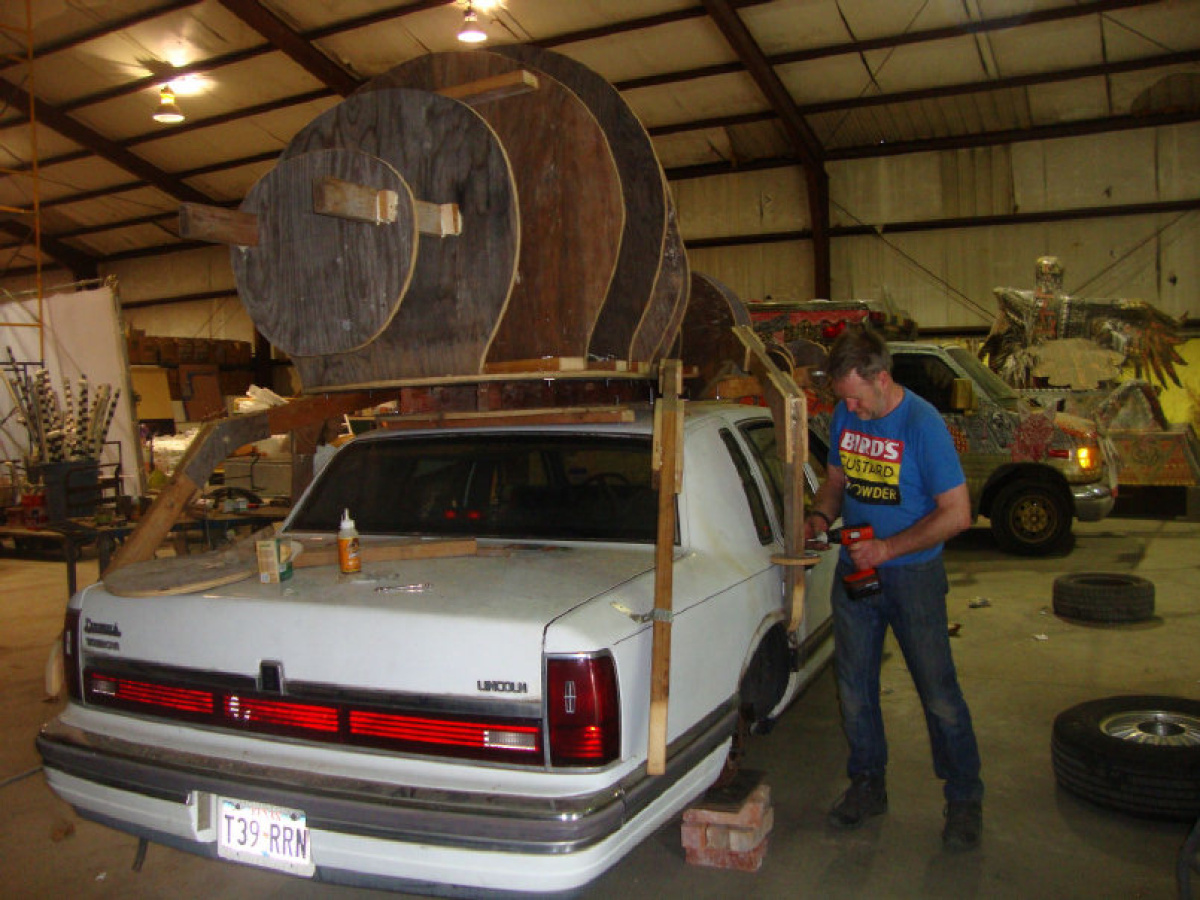 It took her four years to paint the Map, her third art car in 17 years, and says she’s finished painting her baby “for now.”

Most recently, Lowe painted the dashboard so she could “see stuff on the inside” and keep herself amused as she amuses other folks who wave and shout “Art car!” when she drives past.

Lowe is one of the about 30 “daily drivers” who use their art car to get around and for one weekend every May, she feels like a rock star driving in Houston’s annual Art Car Parade, the oldest, largest and most organized art car parade in U.S. and “the most fun in the whole world, ever.”

When the British artist heard about the parade a couple of years ago, he had to be a part of it. 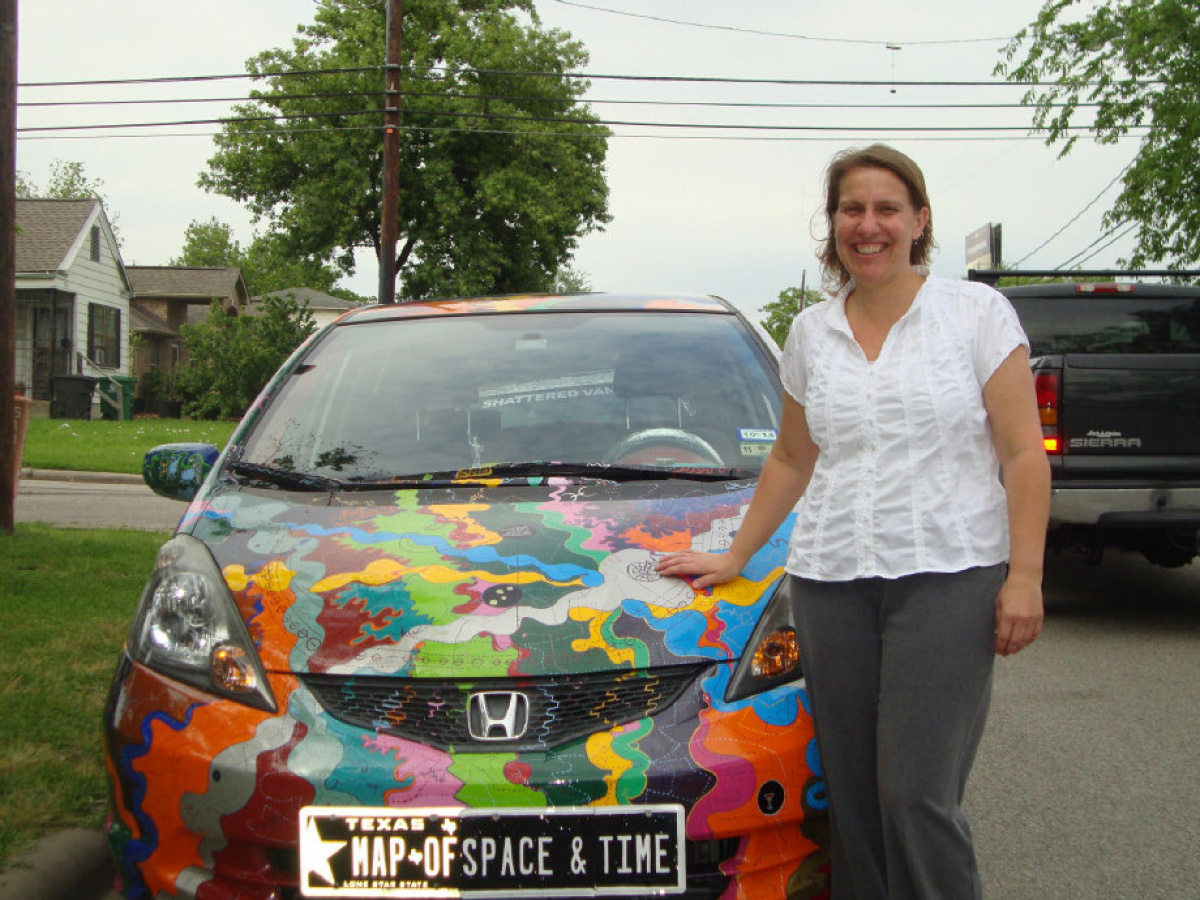 “Instead of going on a Caribbean cruise I come here and work in the art-car-cave,” he says as he creates a giant spider atop an old Lincoln Continental, a design he sketched on the plane on the way over and that won first prize in the 2014 Art Car Parade.

He won first prize in 2013, too, with the Heroicar, a superhero riding on top of a car and thousands of LED lights along the side.

When Hazell is safely back in the U.K. making public art and “putting blobs in front of buildings,” his winning art cars make appearances at events around Houston all year long. “There is no stopping me, I really like doing it,” he says.

“It’s like a game show challenge, you get two weeks and a bunch of stuff and off you go.”

Instead of winning a car, you get to drive one in the parade. 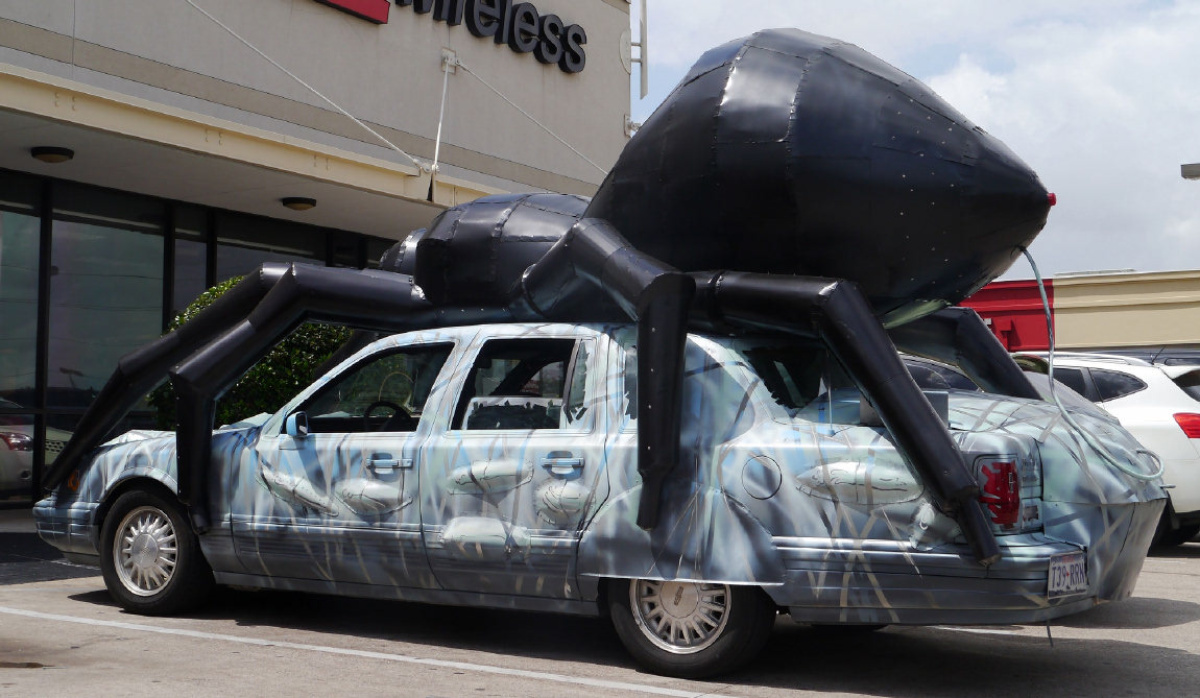 If you miss the parade, you can also check out a few art cars at the Art Car Museum (or Garage Mahal, as the locals call it), a not-for-profit that has bought and displayed a few of the winning entries over the years — a giant cockroach, a bigger bunny and even a red stiletto on wheels.

It’s all part of the city’s tight-knit art-car community.

“It becomes contagious, you have to be careful who your friends are or you’ll make an art car,” says Nicole Strine, president of the Houston Art Car Klub and creator of Shattered Vanity, a 1997 Honda Accord adorned with thousands of cut mirrors she assembled during five months of evenings and weekends “without sleeping or eating.”

She admits — somewhat sheepishly — that these days, she parks her art car during the week and takes a different one on her long commute so as not to risk crashing her work of art.

While Strine misses the attention she used to get on her way to work, she jokes that there are advantages to looking like everyone else on Houston’s roads: