‘Warrior Concept’ a bold take on the Titan XD

The Warrior Concept is powered by an optimized Cummins 5.0 V-8 diesel that Nissan hopes will become the king of the torque wars.

DETROIT, MI: Nissan is quickly gaining cred in the full-size pickup segment, having been named a finalist for North American Truck of the Year.

Punctuating this milestone was the debut of an even more kick-ass version of their Titan XD truck – the Titan Warrior Concept.

It is based on the production vehicle, but modifications are far more than cosmetic.

California-based Nissan Design America has given it a significant boost in size, presence and offroad ability.

Wheelbase and length are identical to the standard XD Crew Cab, but the Warrior gains nearly three inches in height – to install a set of 37-inch tall offroad tires, which with its new, long-travel suspension, required another six inches in width, now 86.6 inches. 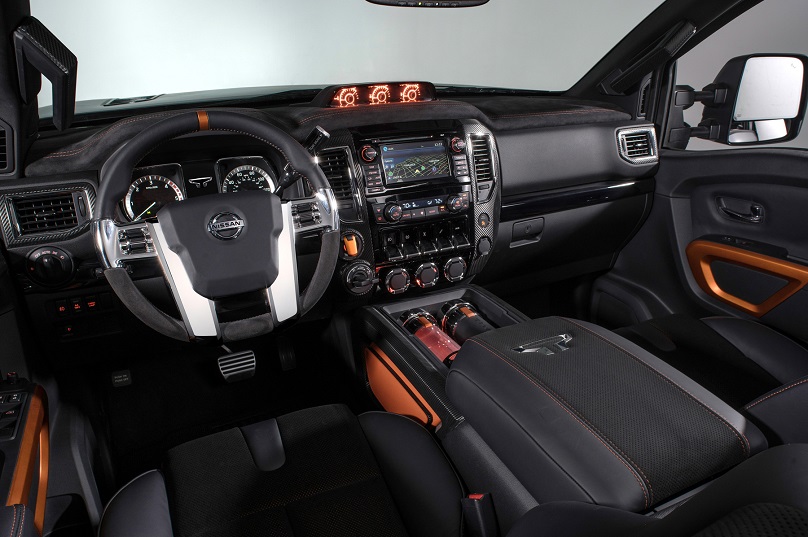 The exterior makeover is significant, starting with the grille and headlights, which have been tweaked for a more menacing look. Also up front, the large skidplate flows into its brawny front bumper.

All fenders have been flared, and functional hood vents not only look cool, but help cool the engine. At the rear are quad-tipped exhausts, integrated into the bumper.

Despite this Titan’s bulk, which appears to cut the wind like a fist, there a few aerodynamic tweaks like rear cab and tailgate spoilers.
Interior design features include charcoal seat fabric with contrasting ‘Magma’ orange trim, along with materials that include carbon fiber, chrome and leather.

Indeed, the passenger cabin is quite avant-garde, yet includes robust elements like beefy toggle switches on the centre stack, and a steering wheel that appears to be milled from a single block of aluminum. 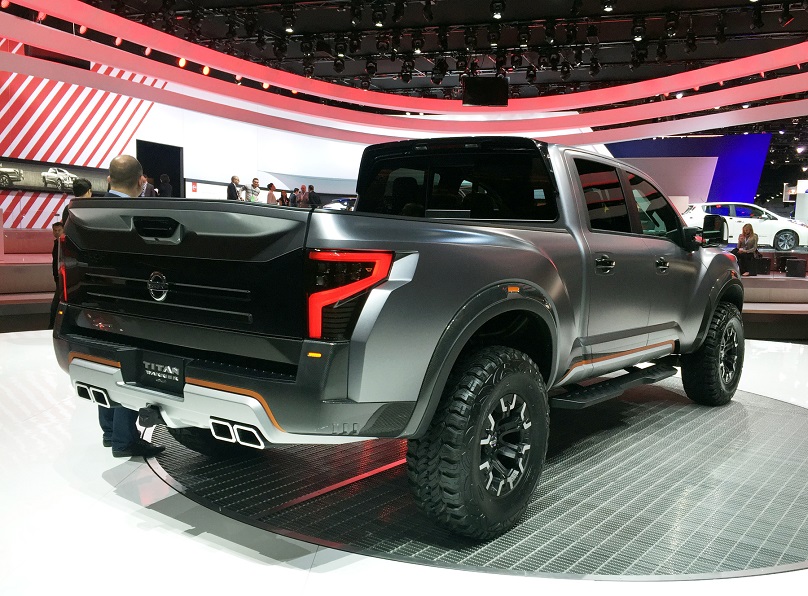 Power comes from the same Cummins 5.0-litre V8 turbo diesel (mated to a six-speed automatic) that powers the conventional XD, delivering 310 hp and 555 lb/ft of torque.

Where the Warrior Concept differs is in the suspension, which is fitted with a custom upper and lower control arm with performance ball joints, racing-style coil-over shocks and other custom mechanicals.

Overall, it’s a beast in terms of form and function, and at nearly seven feet high, more than seven feet wide and 20 feet long; it may not an ideal choice for downtown dwellers.

But it would proudly fit in my driveway – barely…