Walk Before You Sprint: A Look at the new Mercedes-Benz Sprinter Factory

This is a massive facility. Three buildings, adding up to 140,000 square metres, on a plot of land ten times that size. 900 employees to start, expected to grow to 1,300 by the end of the decade.

After 12 years of reassembling vans from kits, the Sprinter has a real home in North America. The plant in Charleston, SC, has just expanded by 93,000 square metres in order to let the automaker build vans from scratch, or at least close to it.

Why a new facility after building from kits for the U.S. market and importing from Germany for the Canadian market for the last decade and a half? Cost, of course, but also for convenience for customers. Unlike the sedan market, or even the pickup buyer where there are only a handful of choices, mostly the colour, the Sprinter offers up more than 1,700 configurations. Most of those are significantly different from each other. Canadian orders from Germany, and U.S. orders from kits re-assembled in Charleston, could take up to six months to deliver.

Now, orders are more flexible and can turn around much more quickly. For buyers needing customization beyond what the factory offers, many of the main Sprinter upfitters have plants located just down the road. On our trip, we saw fleets of the vans headed between the various shops.

So what does one of the most modern automobile factories in the world look like? Big.

This is a massive facility. Three buildings, adding up to 140,000 square metres, on a plot of land ten times that size. 900 employees to start, expected to grow to 1,300 by the end of the decade. Older factories tend to be low-roofed, hot, and dark. This plant, in contrast, is very bright and well lit. With tall ceilings, and, fortunately for everyone inside, air conditioning.

Mercedes wouldn’t give a production capacity for the facility, but current North American sales add up to around 44,000 vans per year. And that’s before the just-announced order from Amazon of 20,000 vans for its delivery partner program. The facility is set up to build EVs when they’re introduced, if demand is there, that is. 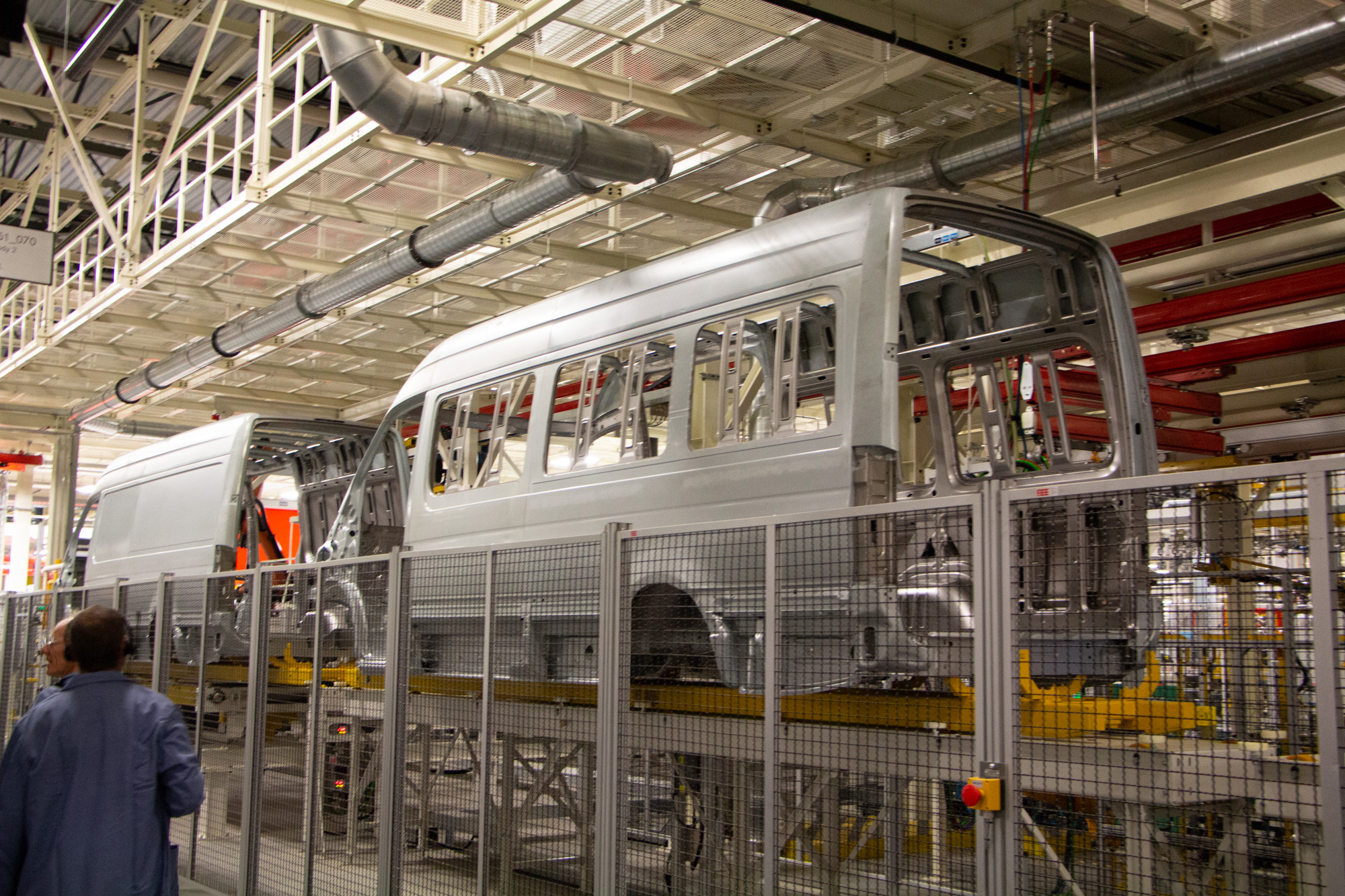 Building a new factory means training new staff. There are around 900 individual steps required to help bring together more than 6,000 components to produce a van. You need workers before you can build the first one, so staff were trained at international Mercedes-Benz van facilities, at other Mercedes plants in North America, and using new virtual reality training simulators. Building virtual vans, virtually, rather than producing scrap vans as training tools.

In the body shop, where we spent most of the tour, the human workers are largely controlling and operating robots. But some are more involved in the process than others.

When it comes to moving massive pieces, like floorplans and bodies, machines do the lifting and some of the welding. Then people, using mechanically supported and guided massive welding machines do the fine work. Getting into the places the larger robots can’t easily access. Measures of precision and accuracy like microns, fractions of a human hair, are smaller than the eye can see, but that doesn’t mean that there isn’t room for the human touch.

We spotted at least one worker using the old Mark 1 eyeball and the classic hammer to finesse some sheet metal into place. Even in an ultramodern plant, some slight modifications are needed from time to time. Especially if you want to maintain the zero landfill waste that this plant has. Though that component will be measured, inspected, and will still need to meet the shop’s standards. 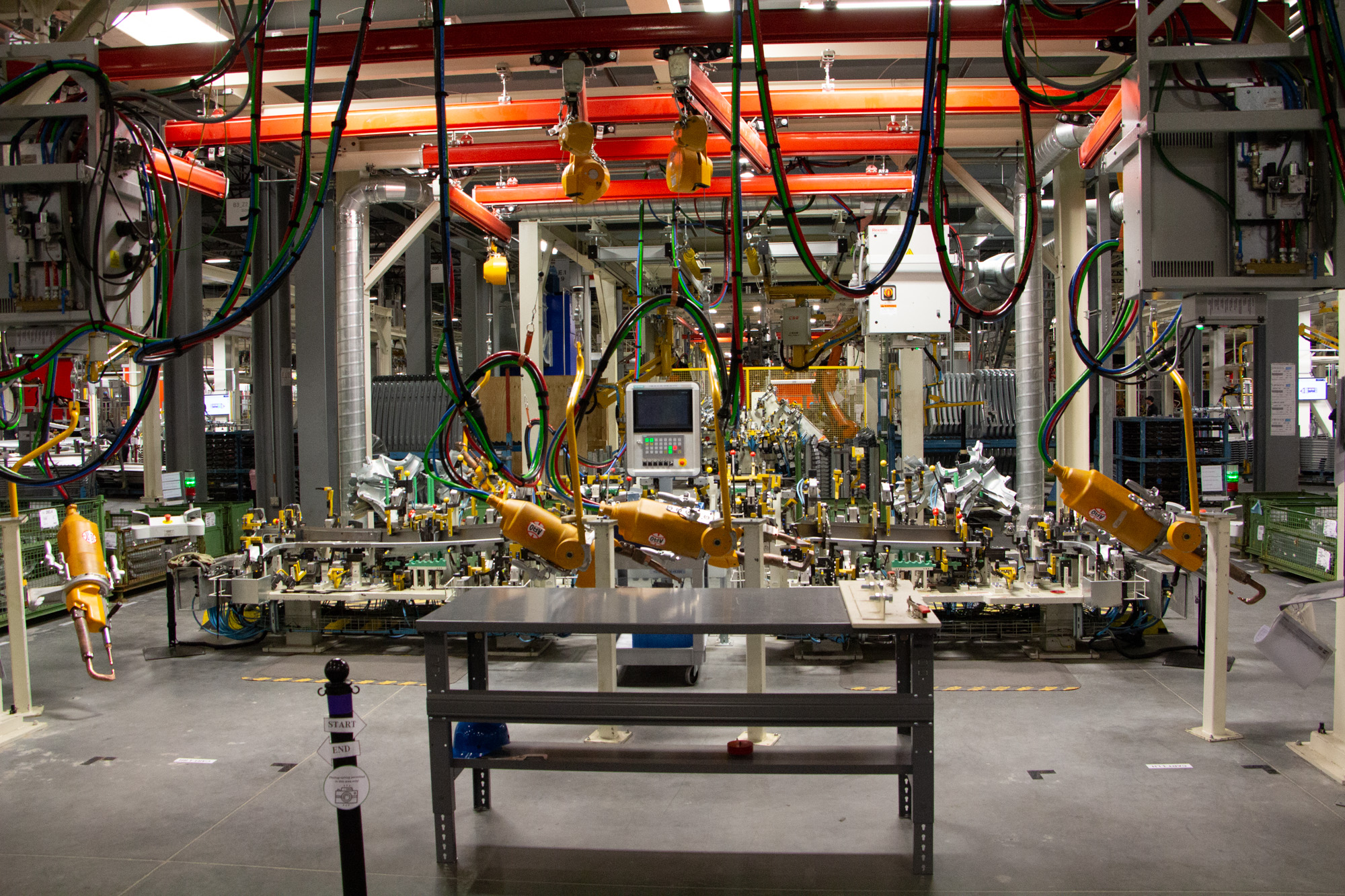 There are over 9,000 welds in every van. Plus 10 metres of laser welding and up to 9 metres of laser brazing, which sounds like how I want to cook my next steaks. There is also more than 111 metres of adhesive that goes into holding the van together, though this is definitely not the glue you’d use at home.

Once the body is together, it’s time for paint. But not until each bare metal body goes through a rust-proofing process that sees the entire van dipped and then flipped. End over end, to make sure that the coatings get into every crack, crevice, nook, and cranny. Then it’s off to paint where workers who trained on virtual spray guns apply the paint. A wide range of shades is available, though you’ll probably only see white and black on the road.

It’s a fascinating process, watching as nearly flat stamped pieces of steel come together to make what looks like a van. Then engine and transmission combos, imported from Germany, are married to the bodies. Along with hundreds of metres of wire. Then dashboards, seats, and the rest of the interior. Swung into position on mechanical arms then attached. In an order that makes sure machines have access to slot in the next part.

See a vehicle put together, and it makes it easier to understand why some components are so difficult to access later on. Though it doesn’t make it any less frustrating to the guy or girl with the wrench down the road.

At last, a completed van rolls into the final inspection area. Everything is given one last look-over. Making sure that everything is ready for the commercial customers who will end up with this van. The very first production van is ready in Amazon Gold colours. That van will tour children’s hospitals around the U.S. delivering packages and picking up hand prints before ending at Amazon’s HQ in Seattle.

90 hectares, 900 people, robots that drive 65 km per day, kilometres of welds, and thousands of components made up of thousands more components. It’s what goes into building every Sprinter van each day at the newest Mercedes-Benz factory. 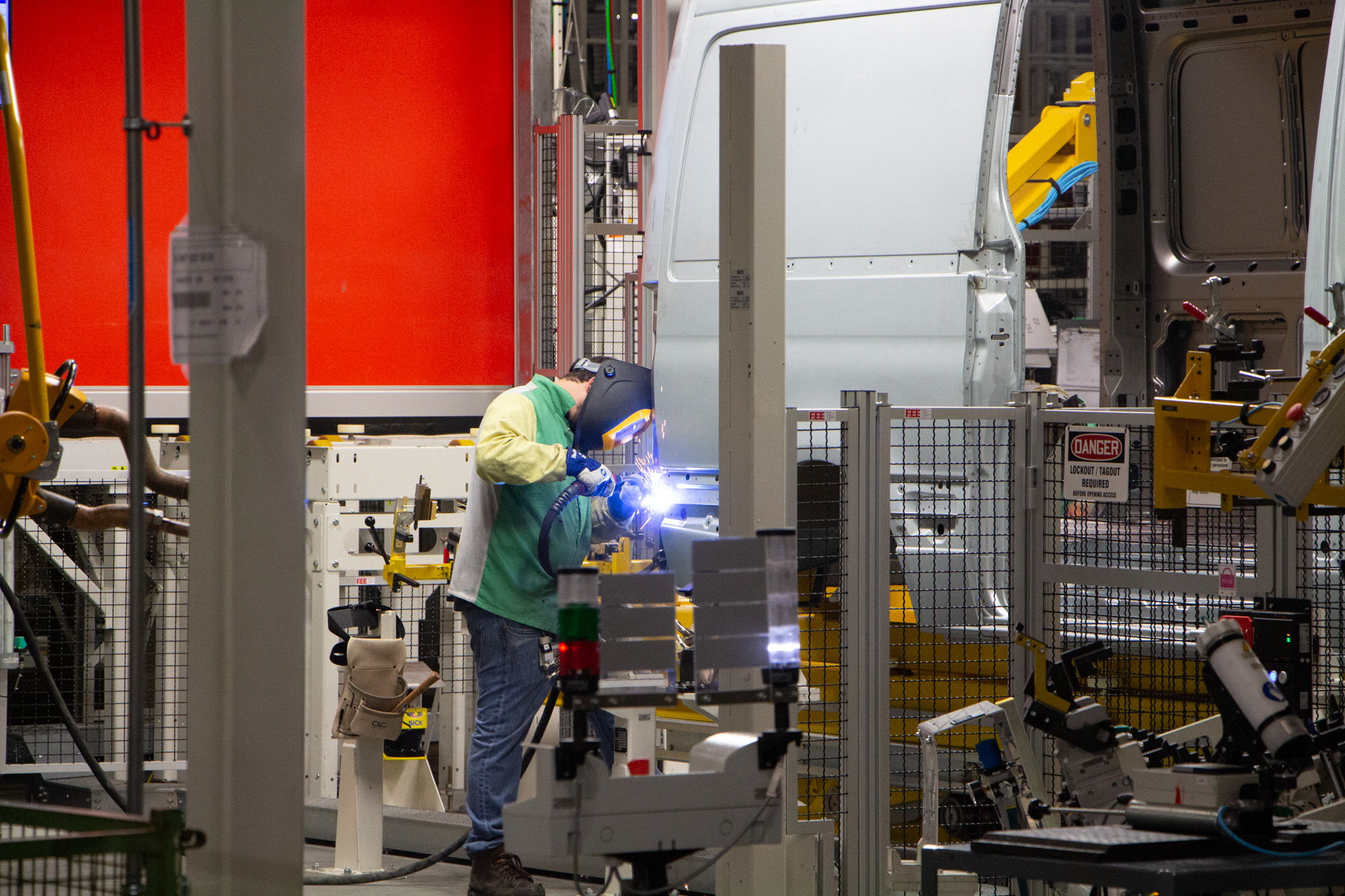 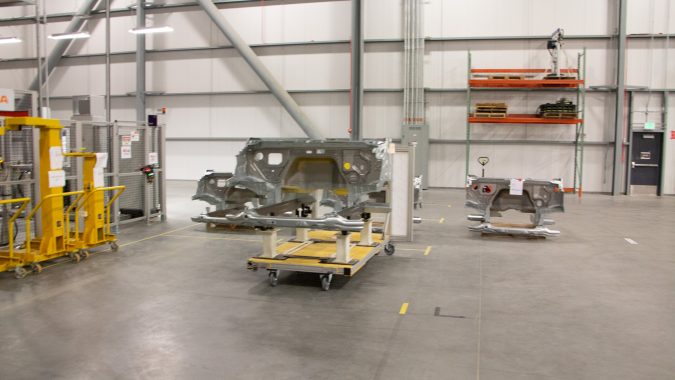 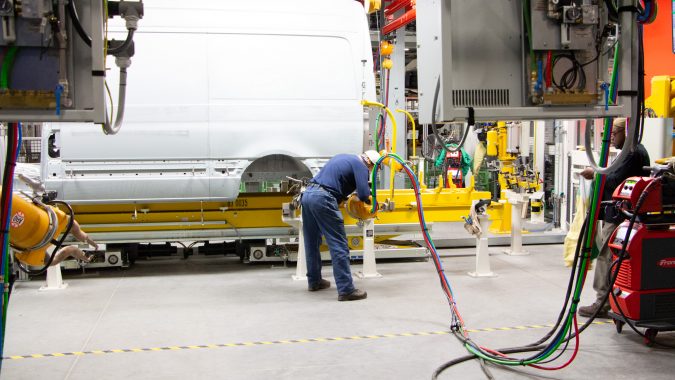