Every year good-hearted people do most of the work in return for a free ticket and a ham sandwich.

They say it would be impossible to put on an auto race like last weekend’s Honda Indy Toronto, or the Canadian Grand Prix in Montreal each June, or the upcoming Celebration of Speed motorsport fundraiser at Canadian Tire Motorsport Park, without volunteers.

Without volunteers, they say, these things just wouldn’t happen.

Now, periodically in the past, I’ve taken issue with that. Formula One, for instance, is a multi-billion-dollar industry (and that’s billion with a “b,” folks) and while I’m an avowed capitalist, it’s always bothered the Red Tory lurking inside me that there would be millionaires sitting around and doing not much of anything at that Grand Prix in Montreal every year while good-hearted people did most of the work in return for a free ticket and a ham sandwich.

At least when Labatt or Molson were involved as title sponsors, either at the Grand Prix or the Indy, the volunteers would be treated to a beer bash at the end of each work day. They could all get a bit of a buzz on while making eyes at the girl or guy next to them and everybody would have a good time.

But that was then and this is now and there are other attractions to volunteering these days, such as getting to meet heroes and to go where most fans of the sport can’t. For Aprile Patterson of Stoney Creek, that’s what made volunteering at the Honda Indy for the last dozen years worthwhile.

I have used the past tense here because Patterson is now calling it a day. She has a daughter and they want to go to races together as fans and not have to work. So last weekend was her last Honda Indy as a volunteer; she’ll be back but it will be in a seat in the grandstand. She’s really looking forward to that.

“I’ve had a lot of fun,” she told me as she drove me around the IndyCar Paddock in a golf cart last Sunday. “Volunteering is the best experience ever. I can’t say enough about the people I’ve met and worked with and the fans are always great. Toronto is a first-class place for an IndyCar race and I hope it stays here for years and years to come.”

Patterson said she started with the Indy when it was a Champ Car race, “then I volunteered for BARC (British Auto Racing Club — Ontario Region) and now IndyCar. There are a lot of perks for a volunteer: I’ve been in the pits, I’ve been able to be on the grid and to see what goes on behind the scenes. I’ve seen a lot more than the average fan will ever see — but it’s time.”

Patterson, who works at a nursery in Burlington and is around 60 (although she looks much younger), said she hasn’t been able to attend a race in Toronto for all those 12 years.

“I’ve been busy,” she said. “When you’re a volunteer, you go to where they need you and sometimes you don’t get to see the race. My daughter needs a companion to travel to races with and we want to go to a bunch of different ones, with Monaco being the ultimate.”

Patterson laughed as she reminisced about two Indy drivers in particular.

“I was driving a golf cart one time and I accidentally ran over a driver’s foot,” she said. “It was Juan Pablo Montoya’s and he’s not very friendly on the best of days but he sure wasn’t happy about that.

“But then there was the day I met Emerson Fittipaldi. He’s the greatest. To let you know how I feel about him, my Twitter handle is @emmofan.

“He is, or was, absolutely the most marvellous driver and representative of the sport. He was always smiling; always friendly. The first time I saw him in the paddock, he looked right at me and, oh my God, I blushed unbelievably. I had on a red T-shirt and I’m sure I was as red, or redder, than that T-shirt.”

Patterson said she will always be a fan of auto racing.

“It’s a great sport,” she said. “It doesn’t have a huge fan base — it’s a niche sport — but the fan base is very passionate. I hope in the years to come that this event, the Honda Indy Toronto, will grow and I’m sure, with the right people, that it will.”

Take care, Aprile. All of us will miss seeing you in the Media Room. 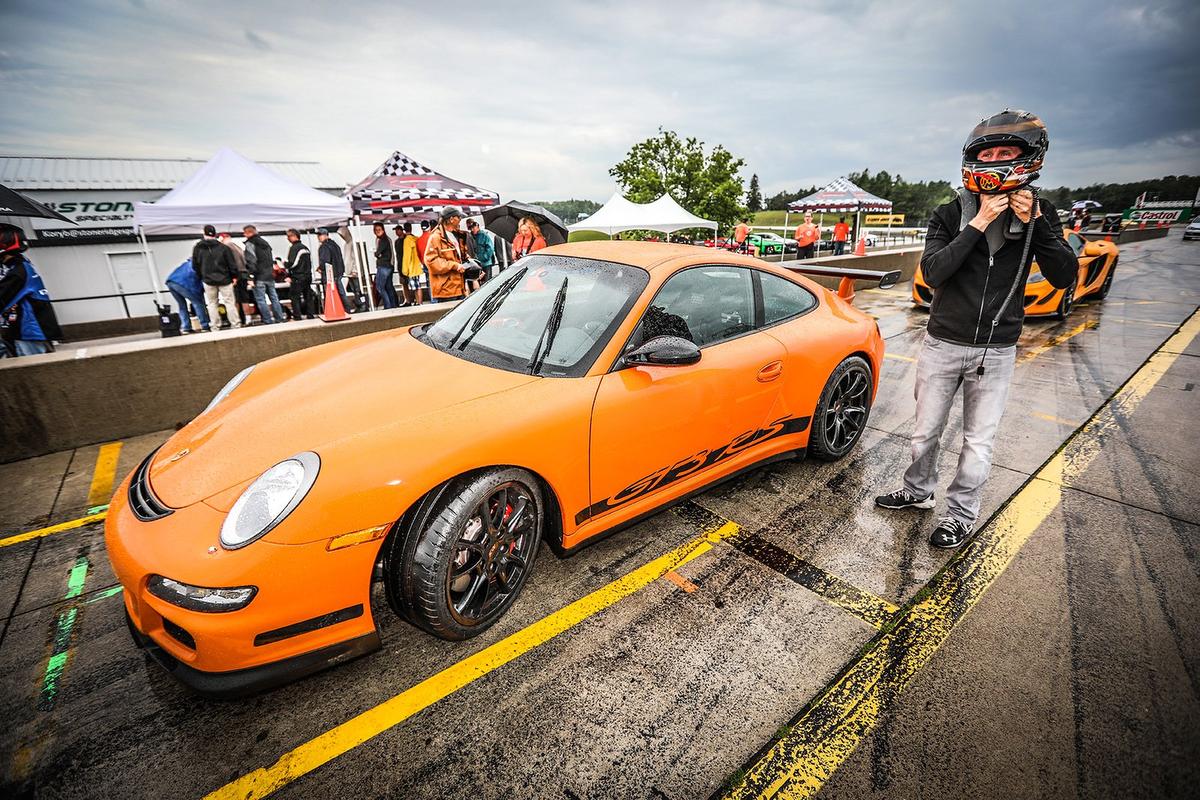 The Celebration of Speed at Old Mosport includes ride-a-longs with more than 40 race drivers volunteering their time.

Now, talking about volunteers, there’s an event coming up at Canadian Tire Motorsport Park (CTMP) on the Monday of the August Civic Holiday long weekend — Aug. 6, to be exact — that also couldn’t happen without people working for love instead of money.

Called the Celebration of Speed, it’s a day dedicated to giving motorsport fans and enthusiasts an opportunity to go where — when you come right down to it — not all that many people have gone in the 58 years CTMP has been in existence.

So car enthusiasts, racing fans and the general public are invited on that day to go for the “Rides of their Lives” around the legendary Mosport circuit north of Bowmanville, Ont., in a variety of exciting cars (Dodge Viper ACR, Kia Stinger, Ferraris, Mercedes, McLarens, Audis) being driven by a group of experienced and professional race car drivers including 11-time Indy 500 starter Scott Goodyear, two-time Canadian driving champion Ludwig Heimrath Sr., Zach Robichaud — he won both Ultra 94 Porsche GT3 Cup Challenge Canada races at the Honda Indy last weekend, Formula 1600 champion Matt White and a whole bunch of others.

As well as the ride-a-longs, 50 experienced drivers will be able to drive their own cars around the Grand Prix circuit. What a thrill!

Upwards of 100 volunteers — more than 40 race drivers (some of them are mentioned above) and people involved in registration, logistics and so-on — will be on hand to ensure that the day is a roaring success.

For exact information, prices and to register, please go to the Hall of Fame’s website, CMHF.ca, and follow instructions.

Founded in 1993, the Hall of Fame recognizes the achievements of those individuals and institutions who have made outstanding contributions to motorsport in Canada. I am a supporter of the Hall, having been inducted in 2015.

Finally, talking about people named White, in this case David (Matt White’s father), who was Canadian Driver to England in the early 1970s, he attended a reunion of the old Players GM Series recently and had a great time. This got him wondering: Are there enough drivers, mechanics, fans and other supporters still around from the old Bulova Formula Ford and Bulova Sedan Series days who might be interested in having a reunion later this year?

If so, please drop David a line at: driveclinic@gmail.com. He’s volunteered to put something together if enough people make contact.