The Volkswagen ID.7 will arrive in Canada in 2024.

Join the Conversation (0)
Volkswagen has revealed its next EV model, the ID.7. Or at least it has sort of revealed the new electric vehicle, showing it off at CES wearing a special electroluminescent camouflage that hides some of the details of the production version of the car.

The Volkswagen ID.7 was first brought forward in 2020. Then called the I.D. Vizzion concept car, Volkswagen called it a "study car." Loaded up with anticipation for the autonomous driving systems that are perpetually just around the corner and bodywork too cool for mass production.

That swoopy and curvy car of the future became the ID. Aero concept in 2022. This time the sedan was assigned a platform (VW's MEB electric architecture) and wore lines that looked much more likely to see production. With its coupe-style four-door profile, it looked very much like an electric version of the Volkswagen Arteon. 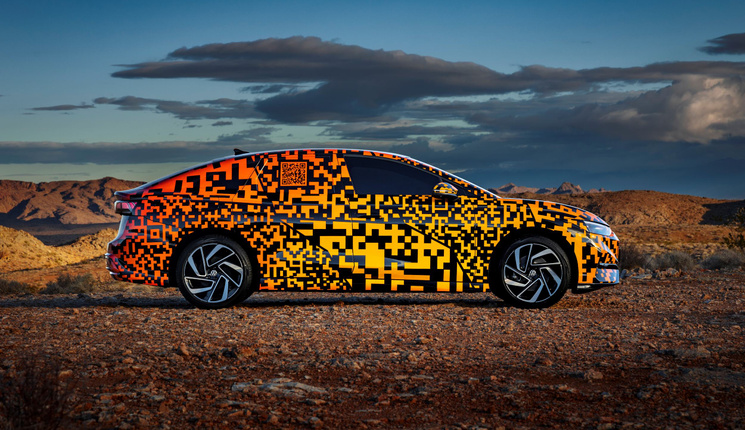 Hiding behind that cool colour-shifting pixelated camo, we're seeing a car that looks very close to the ID. Aero concept. It's not a wrap, either. There were 40 layers of paint applied to the car, some layers conductive and others insulated. 22 areas of the paintwork can be controlled electronically to light up and even pulse like the best club lighting system. The head and taillights poking out are only partially revealed, but we can see elements like the bodyline running front to rear from corner to corner.

Inside, VW is showing off much more of the ID.7 than it is the inside. The wheel is simple and straightforward, while behind it VW has used a small digital dashboard screen. An augmented-reality head-up display will display most of the information to the driver, though it's likely that will be an option and not standard equipment. 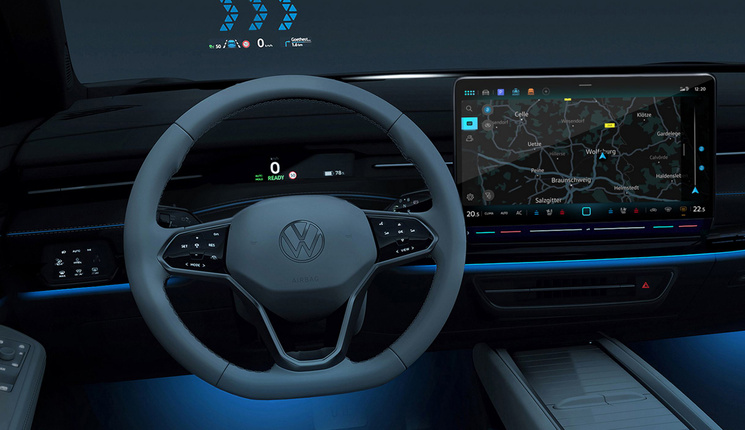 Beside the wheel is a massive 15.0-inch touchscreen. Below that, Volkswagen has sliders to control the temperature and likely similar touch controls for other features. The car gets hidden "Smart Air Vents" that appear similar to those on the Porsche Taycan.

Volkswagen says that the climate controls will be on screen all the time, but that it will also go heavy on voice commands. Say "my hands are cold" and it will turn on the heated wheel, for example, and re-position the air vents. The car will also be able to detect an approaching driver (using the key fob) and heat or cool the cabin before you open the door.

“With the new ID.7, we are extending our electric model range into the upper segments. The sedan will offer top-class technology and quality," said Volkswagen passenger car CEO Thomas Schäfer. 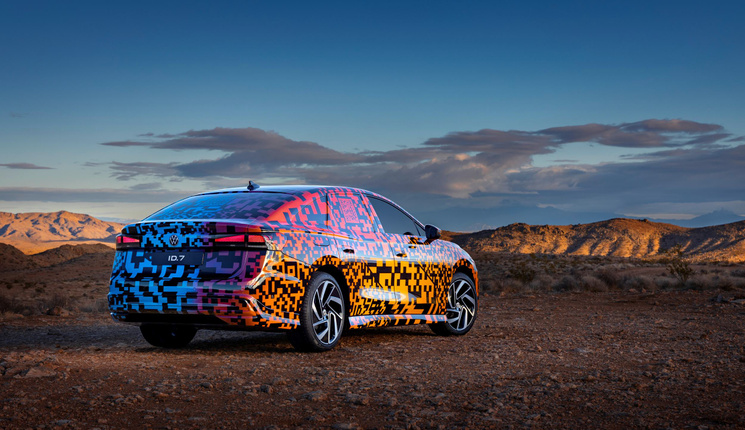 VW hasn't said exactly how big it will be, but at 2,969mm the car will have a wheelbase around 150 mm longer than the Passat. So it should offer more cabin space than the last version of that sedan.

Power and range figures are not locked down yet, but VW does say it expects to hit 700 km on the WLTP cycle. That should translate to the high five hundred range in Canadian testing, by our estimates.

Volkswagen confirmed the ID.7 would be coming to Canada, expected in 2024. We'll likely see the whole vehicle, with more details, sometime later this year.