Volkswagen has turned the Jetta into a jet.

Volkswagen has turned the Jetta into a jet. Sending a slightly modified version of the new for 2019 sedan to the Bonneville Salt Flats in Utah where it set a new class record of 338.15 km/h.

The record run was set in the Blown Gas Coupe class, G/BGC. That means a car with a stock body and chassis, with the engine mostly in the same place as stock. A front air dam is allowed, but no aftermarket spoilers. The leading G means an engine that displaces between 93 and 122.99 cubic inches, or 1.5-2.02 L.

If you’re paying attention, you probably noticed that those figures are more than the Jetta’s 1.4L turbocharged four-cylinder displaces. That’s because the record run was also a bit of a preview for the upcoming Jetta GLI. The BGC class requires an engine swap or a non-factory forced induction. The Jetta already has a turbo, so Volkswagen swapped the engine.

Filling the space between the wheel wells is the 2.0L direct-injected and turbocharged four that will be in the next GLI model. Only here it’s been heavily modified. That means new connecting rods and pistons to hold more power along with new valves and camshafts to help the engine spin to nearly 9,000 rpm. The turbocharger and exhaust system have been replaced as well. It adds up to a total of 600 hp at 8,500 rpm from the little engine.

Despite the stock body requirement, there are some big changes under the skin. It was lowered and fitted with special narrow and aerodynamic wheels and tires for the salt. A limited-slip differential was fitted for traction. Plus the interior was stripped to allow for a full roll cage, racing seat, harness, and fire suppression. A pair of chutes were fitted to help bring the car to a stop. On the flats, safety is a big deal. 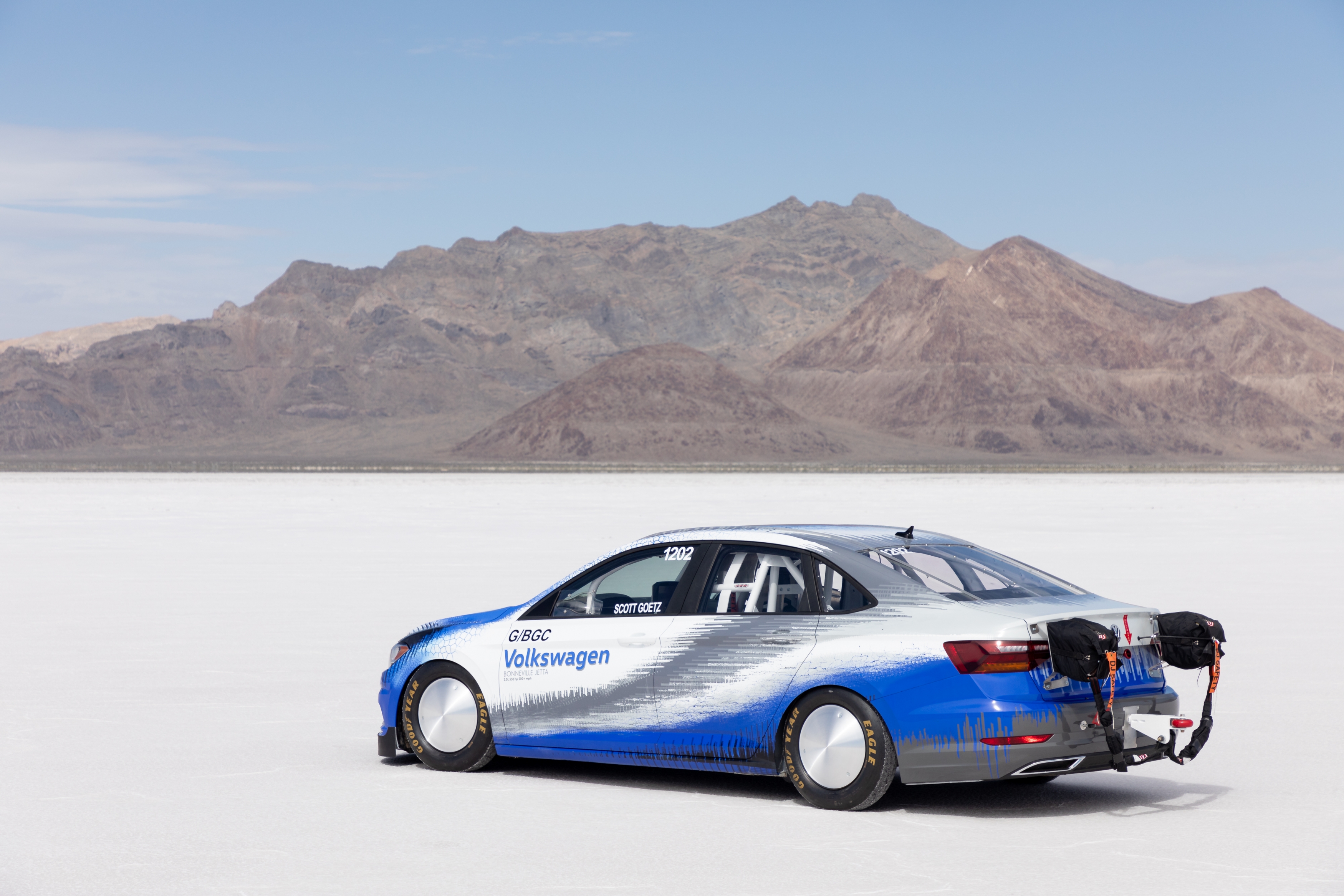 Flats veteran Scott Goetz, who was behind the wheel on the record run, said that “it was a terrific experience to drive this car on the salt. The car inspired a lot of confidence at very high speeds.” The high speed was no doubt helped by the stock Jetta’s slippery 0.27 coefficient of drag.

The Jetta was chasing the old class record of 335.5 km/h, set in 2016 by John Hanson Sr behind the wheel of a Honda Civic.

When the street-ready Jetta GLI arrives, it’ll pack that same 2.0L turbo engine. Well, not quite the same. Expect it to have a power level much closer to the Golf GTI’s 228 hp. 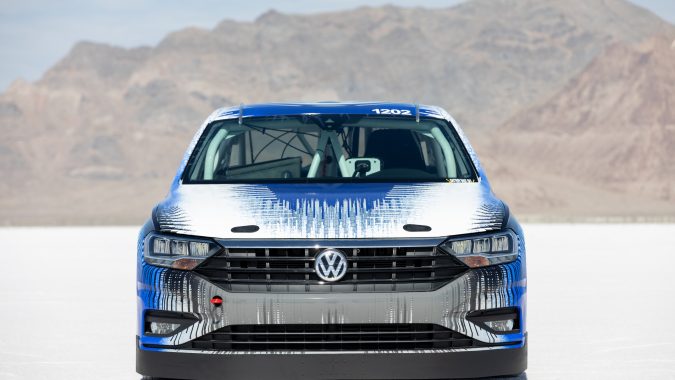 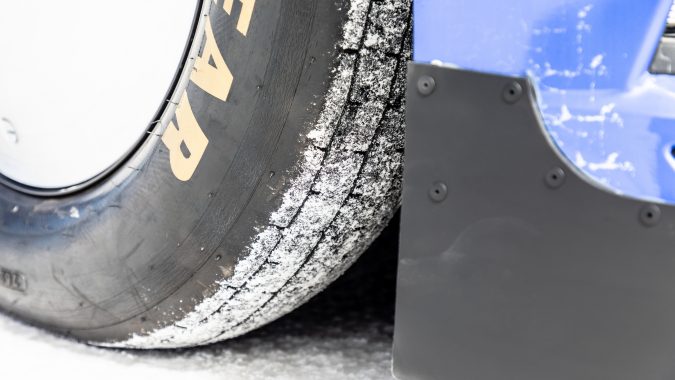 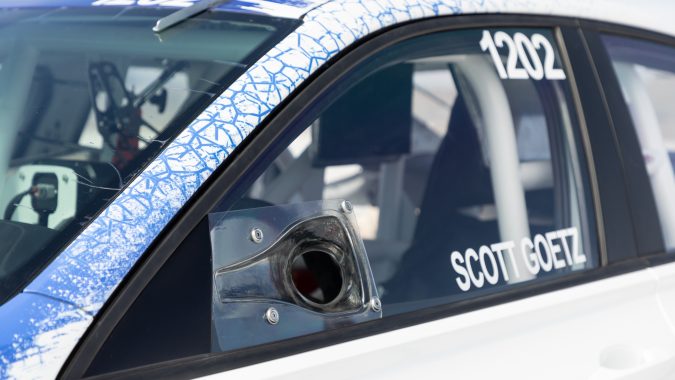 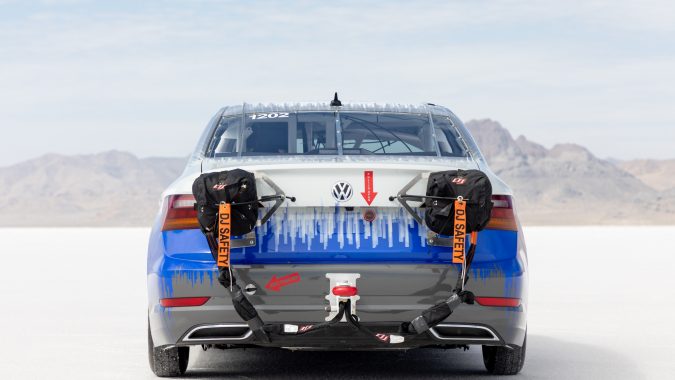 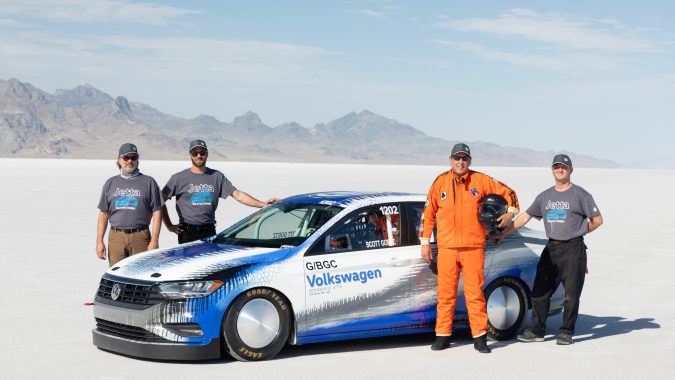 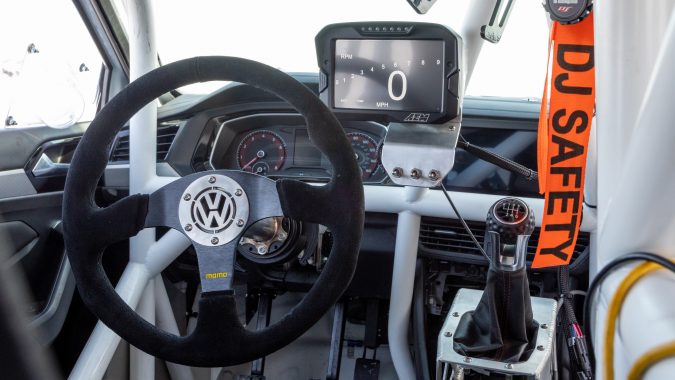