HALTON HILLS, Ont. – There are more of them on our roads than ever, but despite increasing popularity electrified vehicles still represent a tiny portion of the new car market in Canada.

Figures from the Montreal-based non-profit Electric Mobility Canada (EMC), an organization dedicated to the transition from gas-powered to electric vehicles (EVs), reveal that through the second quarter of 2019 EVs accounted for 3.3 percent of passenger car sales.

Now, it should be noted that as recently as last year EVs accounted for just 2.2 percent of sales despite growing by 125 percent over 2017. The total number of EVs on the road in Canada passed 100,000 earlier this year, according to EMC. It took almost a decade to get to six figures, but EMC predicts it will take about three years to get to 200,000.

While the growth of EVs is impressive significant barriers to wider adoption remain, however. EVs remain heavily reliant on government rebates due to the higher selling prices they carry compared to gas-powered alternatives. 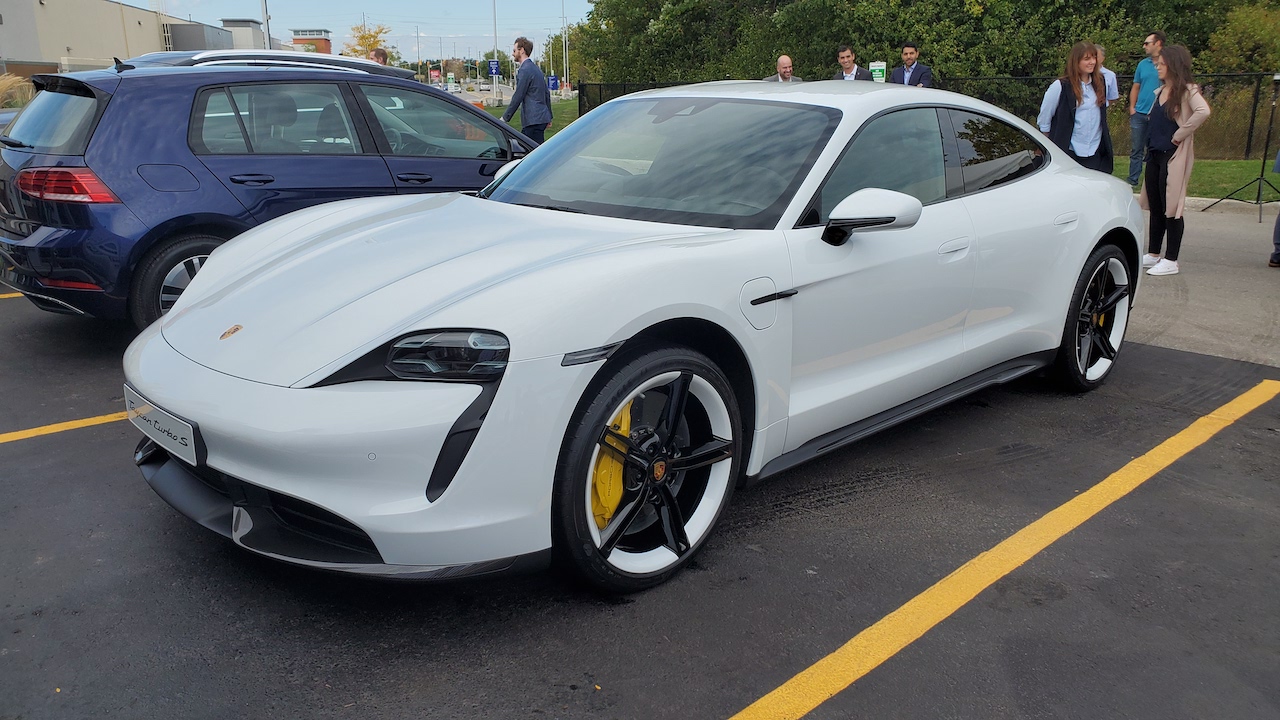 While sales in Quebec and British Columbia are strong thanks in part to provincial rebates, they’ve plummeted in Ontario since its incentive program was abolished in mid-2018. Ontario EV sales were down 55 percent in the first quarter of 2019, and by 58 percent in the second according to EMC figures.

The introduction of a $5,000 federal rebate last May could eventually help boost sales in Canada’s most populous province, but it hasn’t moved the needle with new car buyers so far. Interestingly, sales in non-provincial rebate jurisdictions such as Alberta, New Brunswick and Saskatchewan were up significantly in the second quarter, according the EMC, so the federal rebate is having some impact.

In addition to cost, infrastructure gaps exist. While charging stations have been popping up along major highways and in big city centres over the past decade, there still aren’t that many places to re-charge an EV in Canada. According to figures from the Canadian Automobile Association (CAA), Canada has just 1,895 level 1 charging stations, 1,490 level 2, and 180 level 3s.

If EV sales are going to continue to grow, the charging network is going to have to expand to keep up which is the reason I drove out to Halton Hills last week. 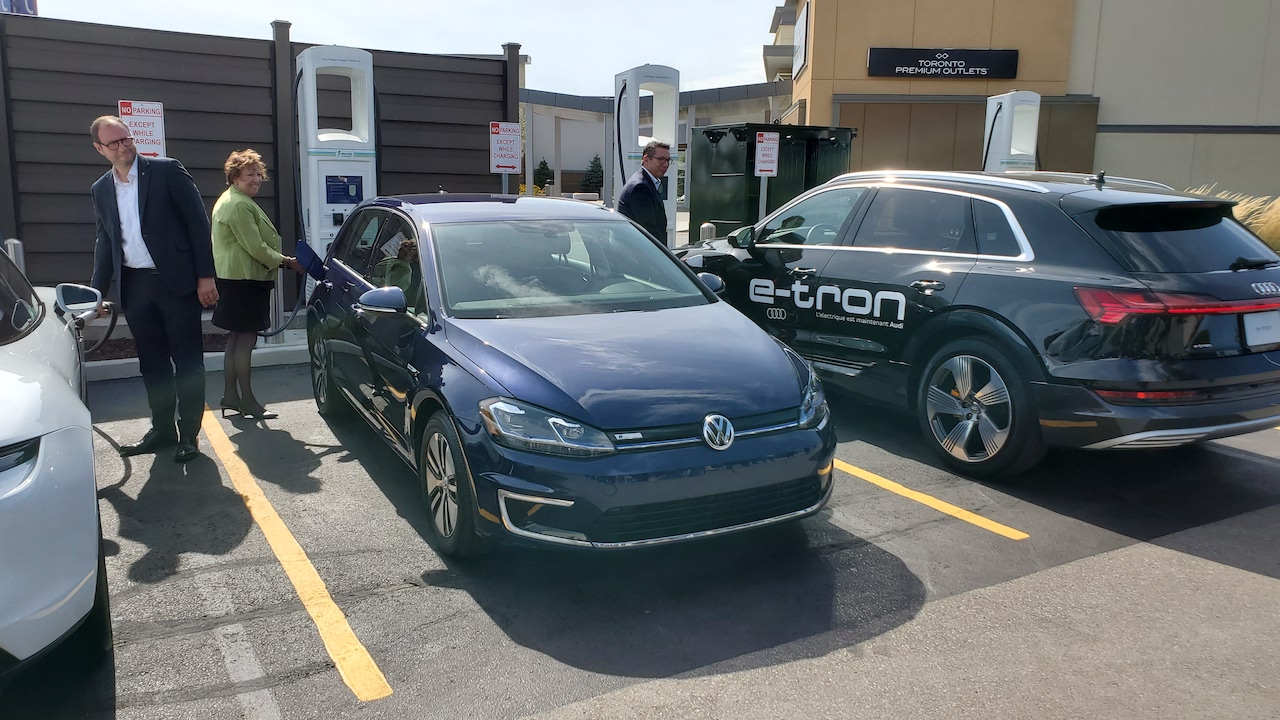 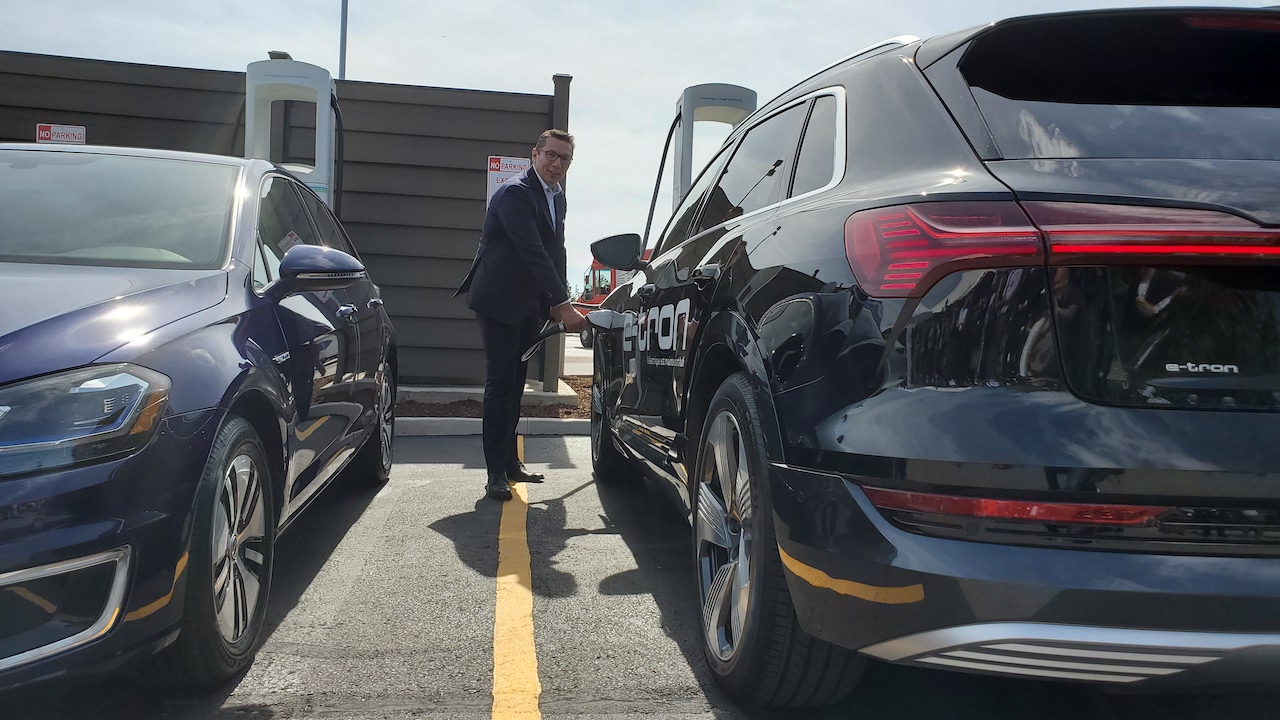 Before a packed tent of invited guests and a handful of media, Electrify Canada christened its first charging station at Toronto Premium Outlets, a high-end shopping mall in Halton Hills, just off Highway 401 West.

Electrify Canada is a subsidiary of Volkswagen Group Canada and was founded in July 2018 with the aim of building out a charging station network in Alberta, British Columbia, Ontario, and Quebec. The plan is to open a total of 32 sites by the end of 2020.

Volkswagen Group of America founded a similar organization, Electrify America, in late 2016. By the end of 2019, the group aims to have 500 locations open in 42 states. Through 2027, Electrify America is expected to spend $2 billion USD to expand charging infrastructure for Zero Emission Vehicles (ZEV) in the United States.

Electrify Canada’s ambitions are smaller, although the chargers that opened last week are the DC 150 – 350kW ‘fast’ variety that feature cooled-cable technology. These are the first of their kind in Canada and are designed to work with current and future EVs that use either CHAdeMO (charge de move, or charge ‘n go) or CCS (combined charging system) charge ports. Depending on the vehicle, the rate of charge is between 4 and 30 km of range for every minute spent charging.

Android and iOS (iPhone) smartphone owners can download the Electrify Canada app which allows users to locate a charger, pay for a charge, start a charge, track a charging session, and view charging history. Registration can also be done via the company’s website at electrify-canada.ca. 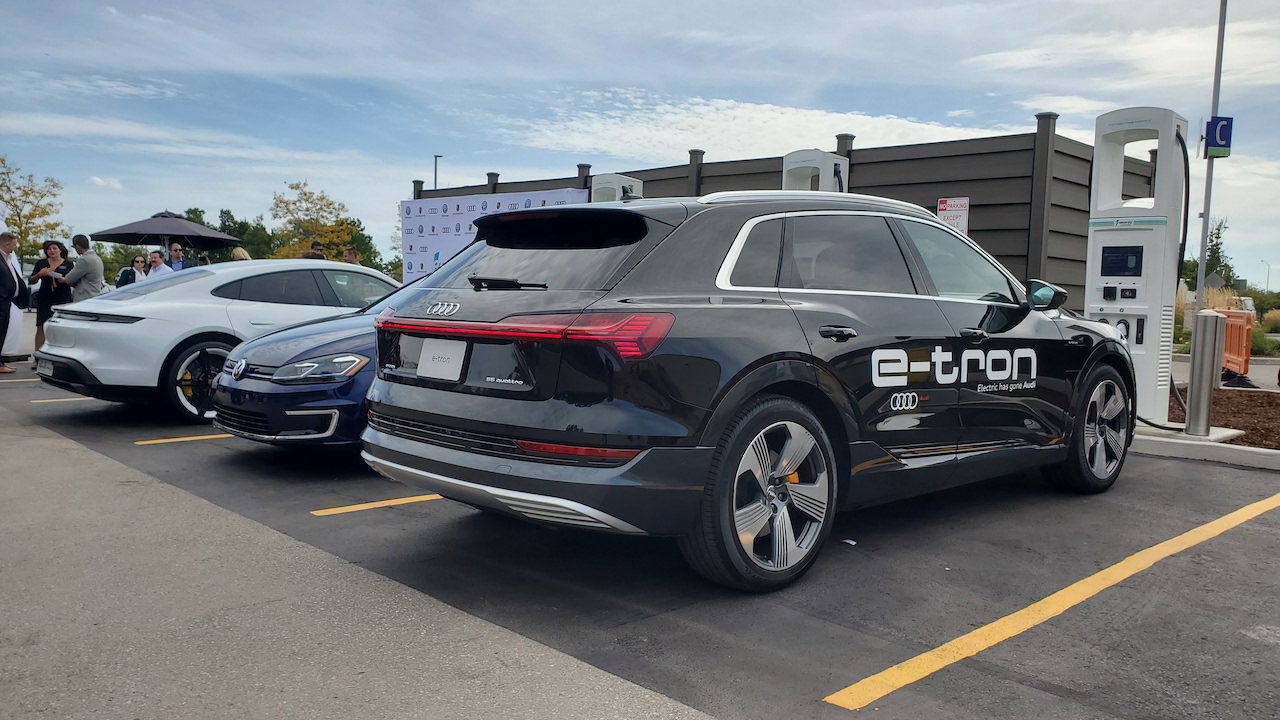 Pass users pay a $1 session fee, plus the cost of charging which varies depending on charge speed selected. Pass+ subscribers pay a $4 monthly fee (no session fee) but get a reduced rate on all charge speeds. Three charge speeds are currently available: 1 – 75 kW, 1 – 125 kW and 1 – 350 kW.

During the grand opening, executives from Volkswagen Group’s three main brands, Audi, Porsche and Volkswagen, were on hand to perform the first charge. Shiny copies of their all-electrics – Audi e-tron, Volkswagen e-Golf, and the all-new Porsche Taycan – served as test vehicles for a site that the company hopes will attract many EV owners regardless of what they drive. 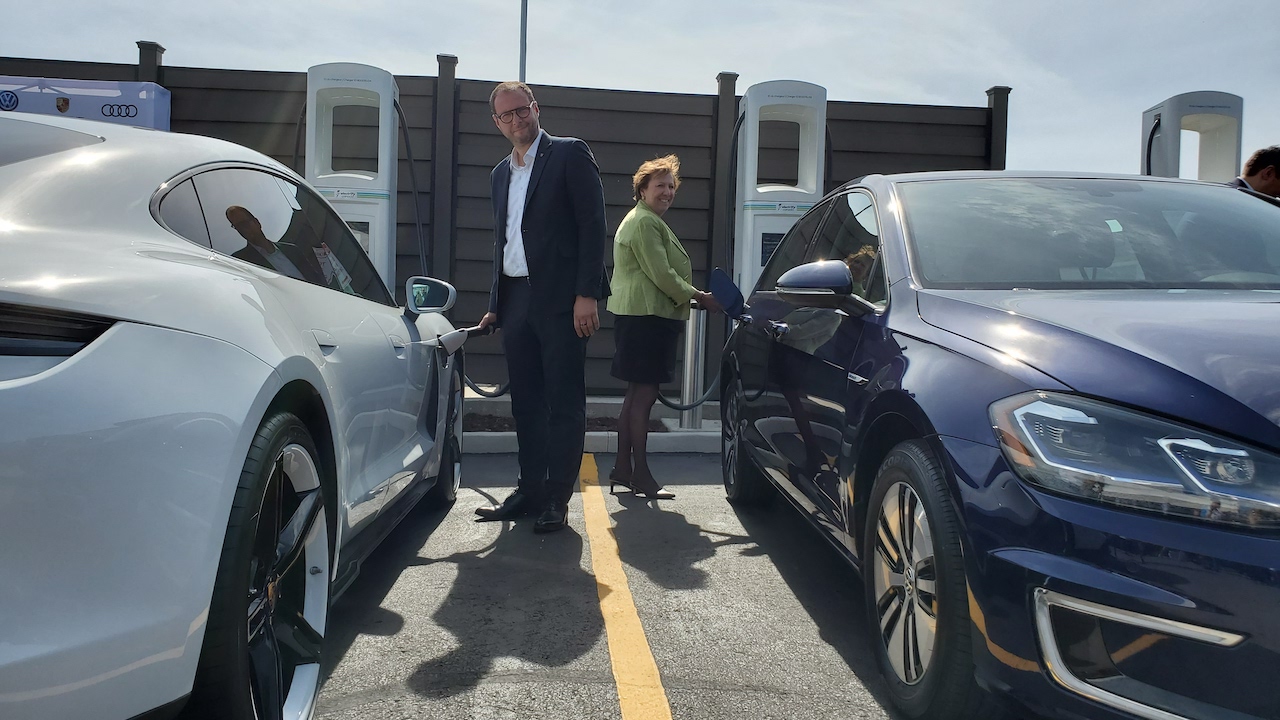 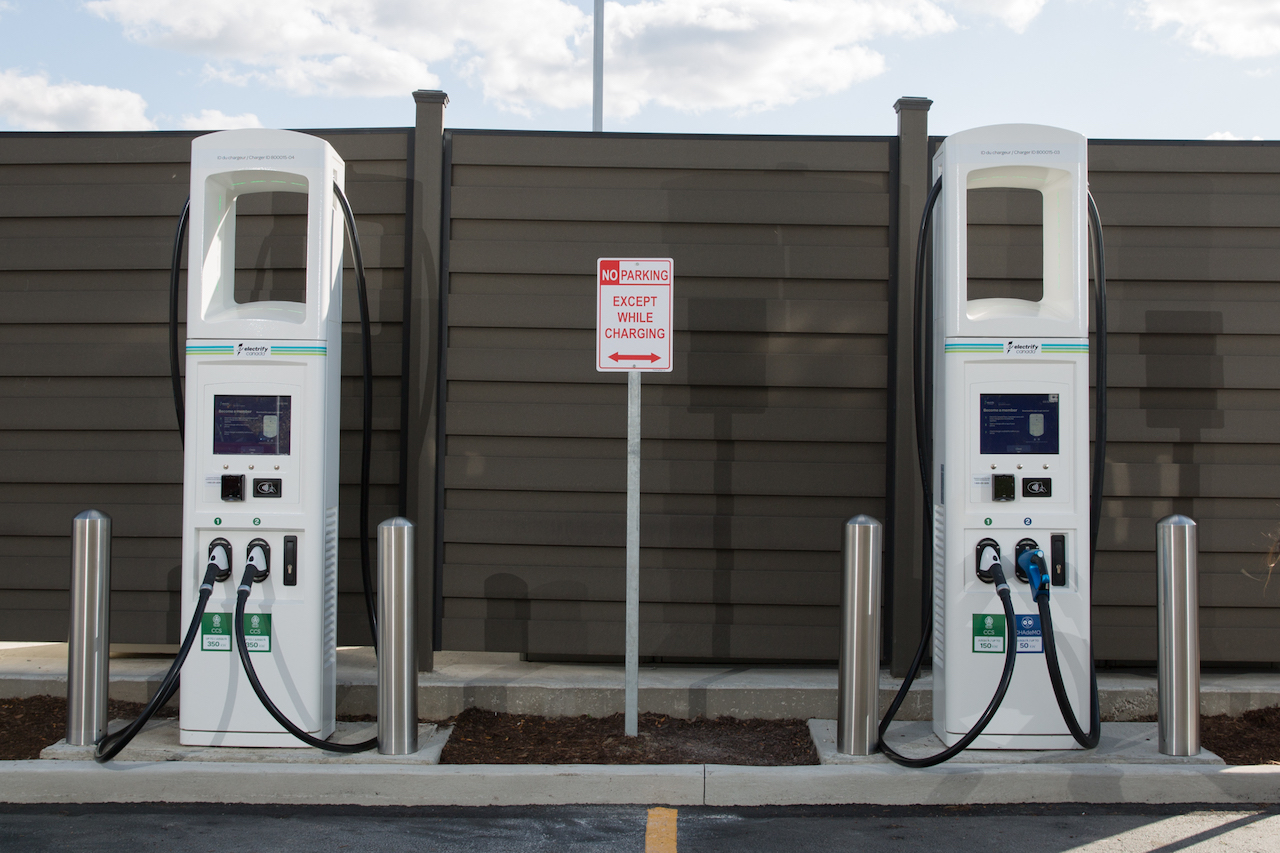 “Convenience, availability and ease of use for EV drivers are our top priorities in pushing the industry forward. The millions of shoppers Toronto Premium Outlets attracts each year and the variety of existing amenities makes it the perfect choice for our first location.”

The manufacturers appear to realize that with EVs, it’s all about the long game. Making charging stations more numerous and with faster charge times, as Volkswagen is doing with Electrify Canada, isn’t enough on its own to grow EV sales. More affordable pricing and a wider selection of models will have to become reality for these vehicles to really start gaining traction with consumers.

But even small steps, such as improving charging access, are important in helping to make EVs more appealing. And in the long run that’s what really matters. 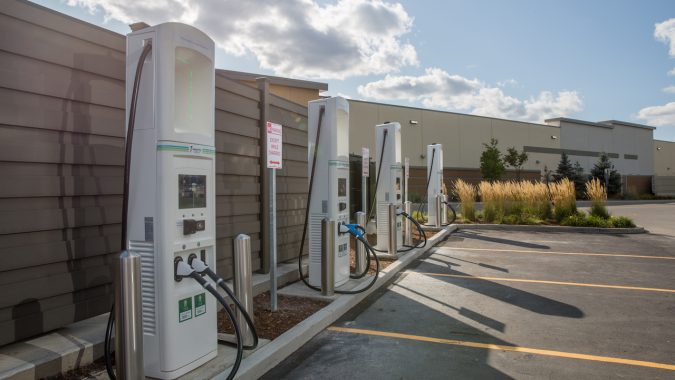 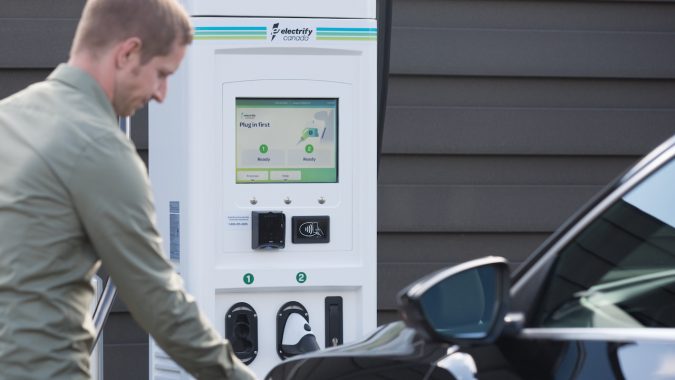 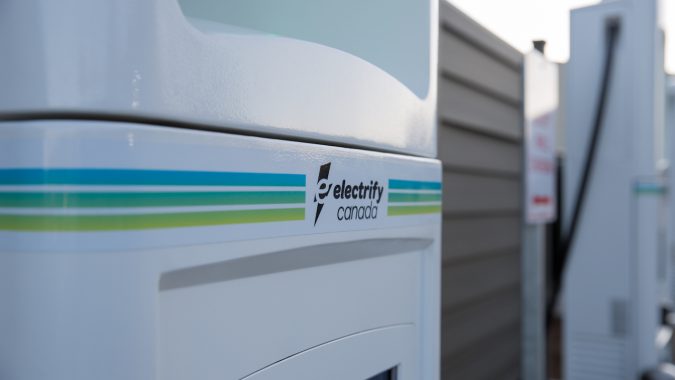 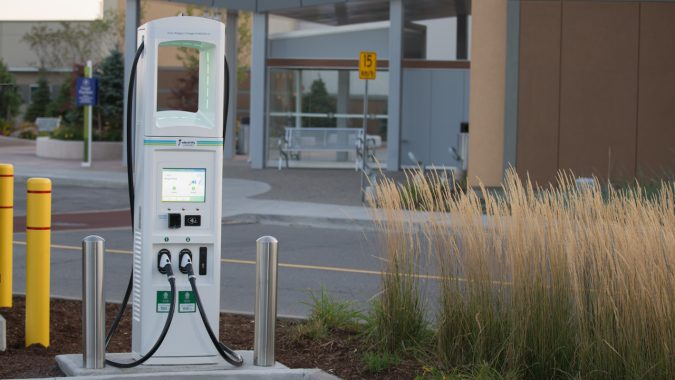 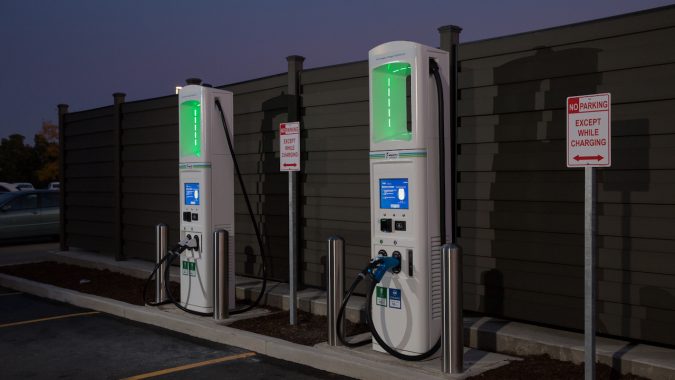 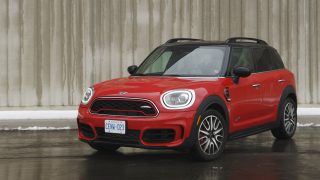 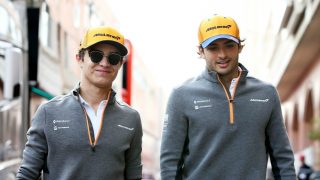