The BMW Vision M Next penned by exterior designer Jose Casas will focus on driving pleasure.

It may be a concept car, but the Vision M Next is BMW’s idea of what a future plug-in hybrid, two-door sports coupe can be for people who still want the feel of driving.

Unveiled last year at BMW’s NextGen Conference in Munich, the Vision M Next is on display at the 2020 Canadian International AutoShow, which annually features concept cars. BMW aficionados will notice the Vision M Next has elements of the i8, M1 and Turbo. The most interesting aspect of the Vision M Next is the striking colour contrast. The front and back ends are bright orange with a hint of red, which BMW describes as “thrilling” orange. It is an offshoot of the colour of the Turbo, but taken to another level to make it more aggressive and more obvious, according to exterior designer Jose Casas.  It works well in combination with the stunning Cast Silver metallic paintwork.

“There were a lot of discussions when we were picking colour,” Casas said. “Grey or silver always shows more than any other colours, and we wanted to show the sculpture of this car, a lot of the boldness of the surfacing, because when you compare it to other BMWs it does not have the typical surfacing, the typical form language. It’s a little more simplified. We tried to use this paint to really maximize and provocate the line to make a more sporty character.”

Another notable feature is the trademark kidney-shaped grille that is oversized and has a design that is inspired by the basic geometric shape of the iconic BMW badge.

“We wanted to explore how the kidney would look if it was just a turbine of an airplane where everything is rounded and seamless,” Casas said.

The grille is flanked on both sides by triangular orange elements. Above them are small, stacked vertical headlights, a variation of what are normally horizontal headlights, that incorporate laser wire technology for the first time on a BMW.

“I tried when designing it to make it a little different and put it in a vertical way,” Casas said. “Normally it’s very long and horizontal. I decided let’s try something new, something that’s in a vertical way and short in length. This of course actually worked very well with the kidney because the kidney is very big, so I had to find an element that actually will support this kidney and not compete with it. If we do two elements the same size, they compete with each other. We wanted the main focus on the grill and the kidney and the lights support this.”

The thrilling orange is incorporated into the rear wheels, which are orange and 22 inches (56 centimetres), while the front wheels are 21 inches (53 centimetres) and coloured silver and black.

Befitting a concept car, the Vision M Next has gullwing doors that lift up by fingerprint and face detection sensors. The interior features seats that conform to the passenger and a horizontal steering wheel that is able to monitor heart rate, which is displayed with other data. 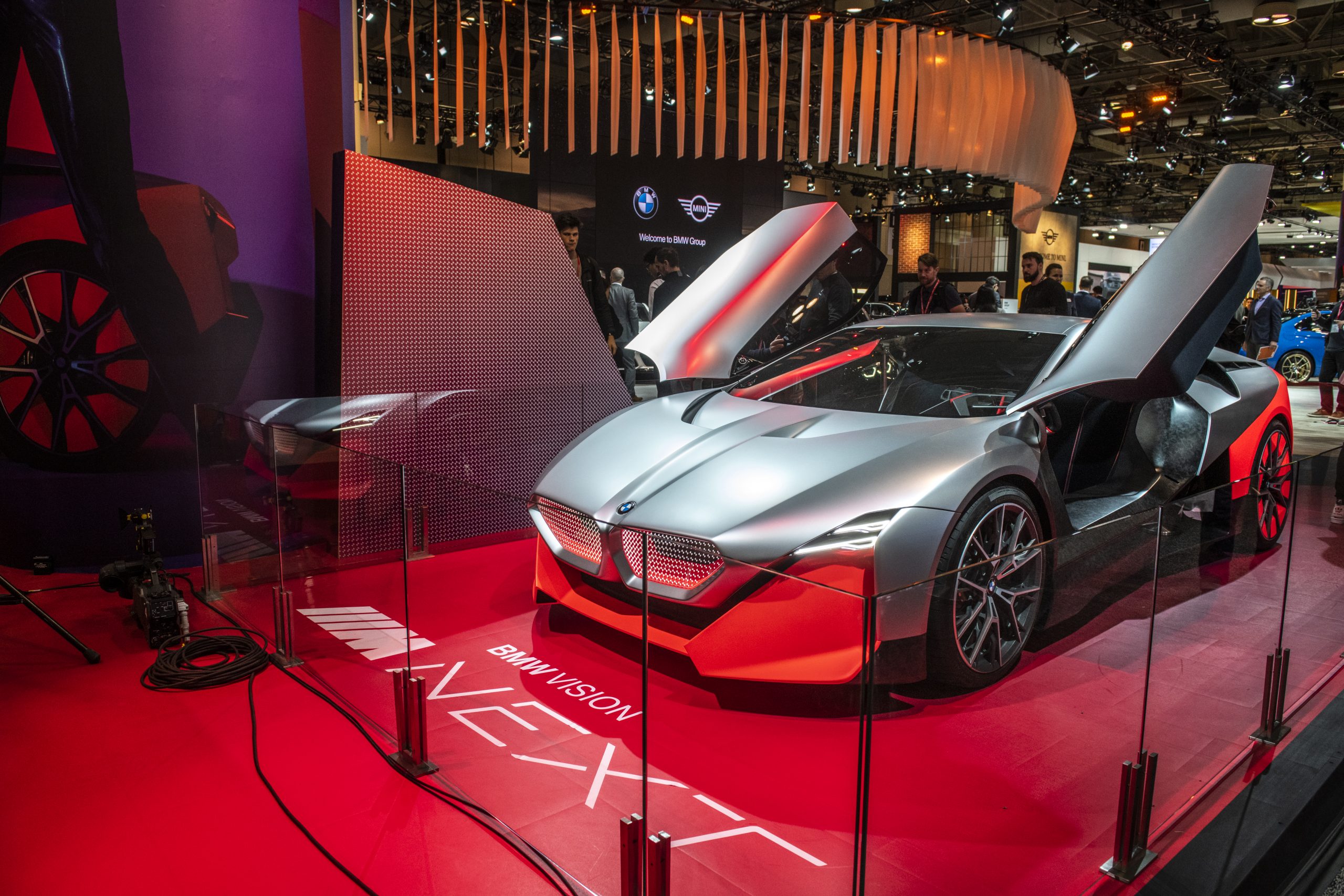 The steering wheel has a Boost + mode that can be engaged by pressing a button to unlock extra power. Combining a four-cylinder turbocharged gas engine with an electric motor, the vehicle produces 441 kW of power and will launch from zero to 0-100 km in only three seconds flat and can hit a top-end speed of 300 km/h. The battery has a range of about 100 km in pure electric mode.

There has been speculation in the industry that the Vision M Next will replace the i8 and possibly go into production as early as 2021. BMW will not comment on any of its future plans.

Casas said working on a car such as the Vision M Next created a different challenge because of honouring the BMW i8, M1 and the Turbo.

“These are very iconic cars and they have a lot of heritage,” he said. “When we started designing this car, we thought about these three cars and bring a much more modern design based on this heritage. How can you make a modern interpretation of this BMW sports car heritage? You can see a lot of simple forms and straight lines, which were also part of this new-form language that helps the car to look a little more unique and modern.

“What’s cool about this car is the exterior is a bit more aggressive and the interior is very seamless that makes everything very soft. We tried to make quite a big contrast with what’s going on outside and what’s going on inside.”

Casas also designed the exterior of the Vision iNext, which is BMW’s idea of a fully-electric autonomous crossover concept car. The difference between the two is the Vision iNext is a car that will do all the work, while the Vision M Next puts the driver fully in control. In fact, the marketing language of this car is “a statement for the driver.”

“It’s not only the autonomous thing, it’s not only thinking of electrified products, but we are also thinking about all these people with a passion for driving,” Casas said. “It’s really important to keep all these people motivated and to show we are still there and we are doing our best to show that side as well and make people excited about it. For BMW to have a car like this is pretty nice. It’s the excitement of a super sporty car that we were missing for a while.”