EV owners can also get paid to sell electricity back to the grid.

Join the Conversation (0)
Electric vehicle owners in Ontario may one day be able to use the electricity in their EVs instead of loud diesel or gas generators to provide emergency power during blackouts. They could potentially also sell back the energy in their cars to the grid when needed. Both are key areas of focus for new pilot projects announced this week by Ontario’s electricity grid operator and partners that include Toronto Hydro and Hydro One.

Three projects announced this week will test the bi-directional power capabilities of current EVs and the grid, all partially funded by the Independent Electricity System Operator (IESO) of Ontario, with their announcement in Toronto also attended by Ontario’s recently appointed Minister of Energy, Todd Smith.

The first project is with Hydro One Networks and Peak Power, which will use up to 10 privately owned Nissan Leafs to test what is needed technically to support owners using their cars as a backup power source during power outages. It will also study what type of financial incentives will convince EV owners to provide backup power for other users, and therefore the grid.

A second pilot program with solar specialist Sky Energy and engineering firm Hero Energy will study EVs, energy storage, and solar panels to further examine how consumers with potentially more power to offer the grid could do it securely, in part using blockchain technology. York University and Volta Research are other partners in the program, which has already produced an app that can help drivers choose when and how much power to provide the grid – if any.

The third program is with local utilities in Toronto and Waterloo, Ontario, and will test a secure digital app that helps EV drivers see the current demands on the grid, and potentially price an incentive to EV drivers not to charge their vehicles for a few hours. Drivers could also be actively further paid to provide some of the charge currently in their vehicle back to the grid.

It all adds up to $2.7 million in program funding from IESO ($1.1 million) and the associated partners.

“An EV charged in Ontario produces roughly three percent of emissions of a gas-fueled car,” said IESO’s Carla Nell, vice president of corporate relations and innovation at the announcement near Peak Power chargers in downtown Toronto. “We know that Ontario consumers are buying EVs, and expected to increase 10-fold – so we have to support electrification.” 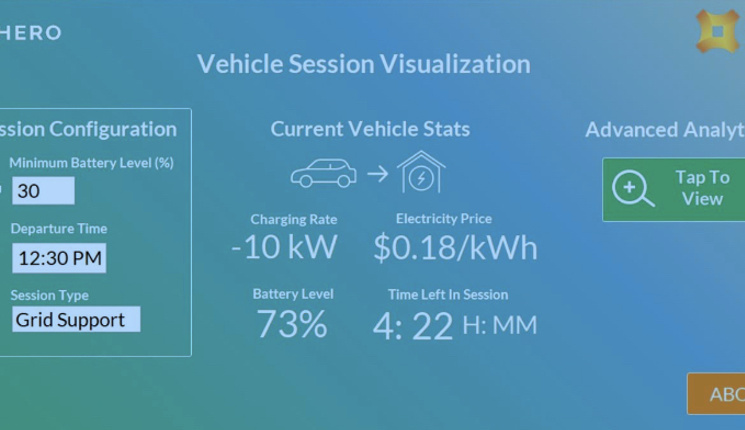 If these types of programs sound familiar, it may be because utilities in Ontario have been testing such vehicle to grid (V2G) technologies soon after affordable EVs became available in the fall of 2011. One such program was run by PowerStream, now called Alectra, and headed by Neetika Sathe, who is now Alectra’s vice president of its Green Energy and Technology (GRE&T) Centre in Guelph.

The difference between now and those tests in the mid-2010s is that the upcoming wave of EV sales can be clearly seen on the horizon.

“We can see the tsunami now,” she said, noting that cost parity between EVs and gas vehicles is likely four or five years away – without government incentives, she stressed. “Now it’s not a question of if, it’s a question of when – and that when has received much more clarity on it.”

Sathe sees a benefit in studying all these types of bi-directional power-flowing scenarios, but notes that they are future scenarios for years in the future, especially since bi-directional charging equipment – and the vehicles with this capability – are pricey, and largely still not here. What she believes is much closer is the ability to automatically communicate what the grid needs with EV drivers, and how they could possibly help. For a price, of course.

“If I can set up a system that says ‘oh, the grid is stressed, can you not charge for the next two hours? And here’s what we’ll offer to you for that,’ that’s closer to low hanging fruit,” she said, noting that Alectra is currently testing out such systems. “Think of it the same way as offering your car for Uber, or a room on AirBnB.”