Won’t go further or charge faster, but will offer better interior all around, and for EUV, more room, an embedded navi and a sunroof

The 2022 Chevrolet Bolt electric vehicle slated to arrive this summer will not only offer many upgrades that owners and EV fans have asked for, but it will also cost a lot less – specifically, $6,800 less than the current Bolt starting price of roughly $45,000.

As such, Chevrolet’s all-electric five-door that’s currently priced very close to BEV hatchbacks from Hyundai, Nissan and Kia looks set to become the undisputed mainstream EV value leader at its starting price of $38,198 outside Quebec (and even after roughly $2,000 in Destination and other mandatory fees, given similar fees also apply to its mainstream EV market rivals).

And that’s before the $5,000 Canadian federal EV rebate, as well as other provincial rebates available for owners in B.C., Quebec and the Yukon.

Even the taller, wider and longer Bolt EUV – the all-new ‘SUV’ version of the Bolt hatchback – will come in at a starting price substantially lower than the outgoing Bolt hatchback. The slightly heavier Bolt EUV will have an estimated range of 402 km on a full charge, will offer roughly three extra inches (72mm) of rear legroom compared to the Bolt hatchback, and will start at a base price of $40,198, the company said upon publicly unveiling both Bolt models on Valentine’s Day. 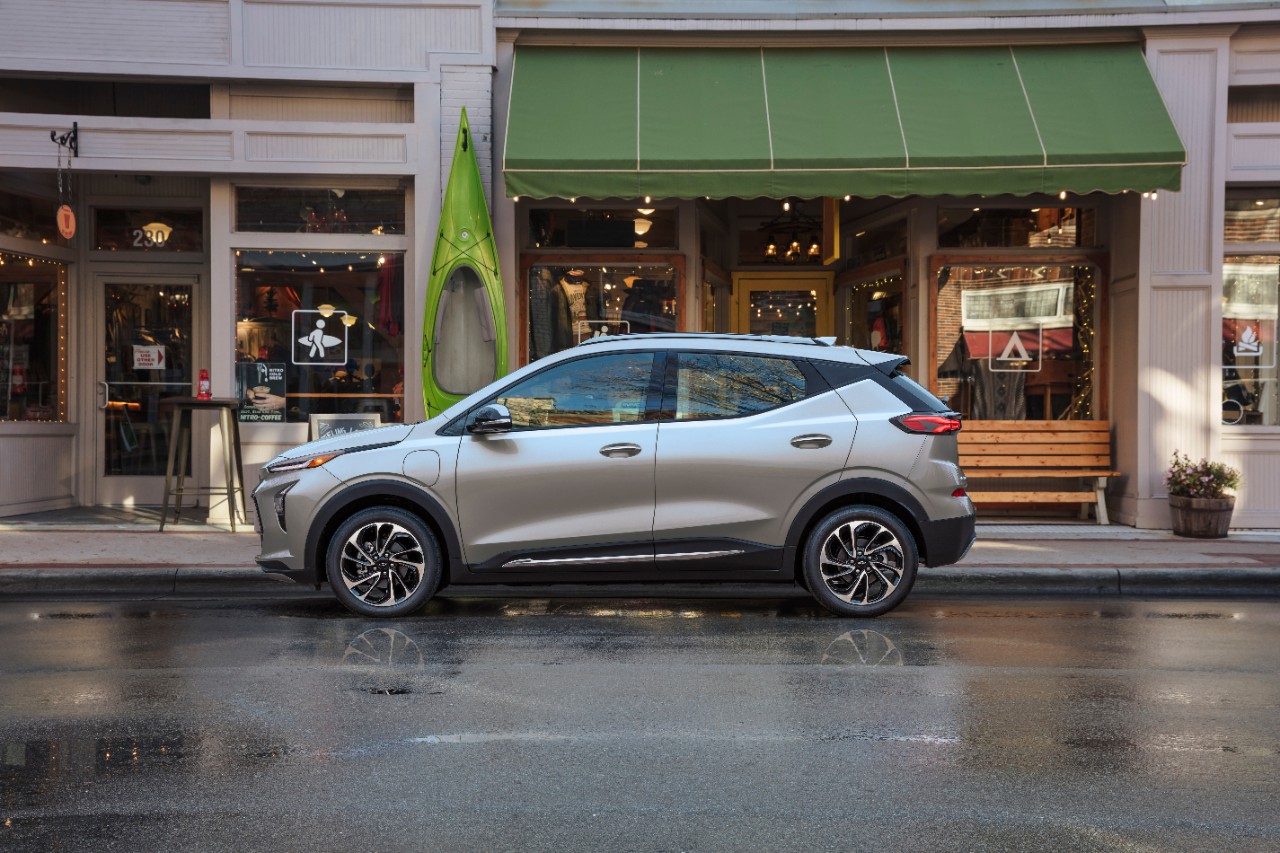 The base Bolt will continue to offer the same impressive 417 km of range from its 65 kWh battery, also used in the Bolt EUV, and both will offer the same 200 hp and 266 lb-ft of torque, which has made the Bolt worthy of ‘hot hatch’ acceleration (0-100 km/h times in the mid-six second range), but which will likely be a tad slower in the slightly larger and heavier Bolt EUV.

The all-new Bolt EUV is truly the big news of the announcement, and as the new top of the range version, it will offer unique technologies and options still unavailable on the base Bolt: one, an available sunroof, and two, the optional Super Cruise system, which will be the first time a non-Cadillac will offer this system (though it won’t offer all the latest tricks that Cadillac offers on the latest Super Cruise systems).

The Bolt’s Super Cruise system allows hands off the steering wheel highway cruising by using a camera to ensure that the driver is still paying attention to the road, and ready to take over beyond the slowing down, speeding up and gentle turns the Super Cruise system can handle on its own. It won’t offer the ability to change lanes with a turn signal tap as on Cadillac Super Cruise systems, but with LiDAR mapping on over 320,000 km of highways, the advanced adaptive cruise control system is available on top-line Bolt EUV Premier models.

Unfortunately, for folks who would like to use the Bolt for extensive road trips, GM didn’t upgrade the 55 kW maximum DC quick charging speed on either Bolt model, even Super Cruise-equipped ones. GM predicts a DC quick charging time of roughly 30 minutes to charge up to 160 km (Bolt) and 154 km (Bolt EUV), or roughly identical to the original Bolt that debuted for 2017. This unfortunately is now notably slower than DC quick charge times from upcoming SUV rivals like the Nissan Ariya and Volkswagen ID.4 (at 130 kW and 125 kW rates, respectively), but still roughly comparable with many current mainstream EV hatchbacks. 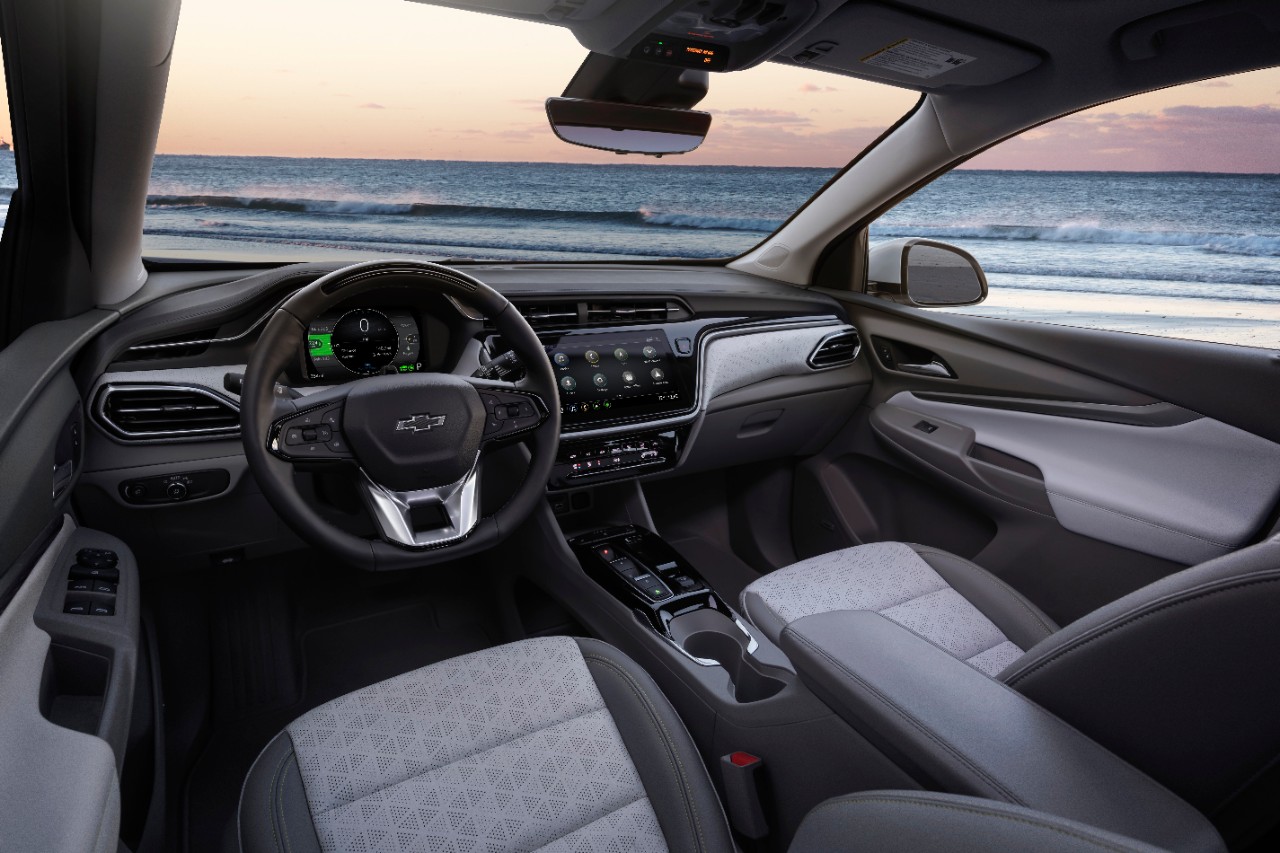 But GM did upgrade charging speeds available on more common Level 2 charging stations, by upgrading its charging capability from a maximum of 7kW to 11 kW. This decreases the time it takes to go from near empty to 100 percent charged to roughly seven hours, down from 10 hours from a similar 240-volt wall-mounted charge station previously.

For those who would rather forego the wall-mounted EVSE option altogether to save a bit of money, the Bolt will also now offer a Dual Level Charge Cord (standard on Bolt EUV) that provides various connector heads that can be plugged directly into a 240-volt (stove or dryer) plug, to offer charging at up to 7.2kW as before.

GM will not use its cutting edge Ultium platform or batteries on these revised Bolt models, and GM executives at a media briefing made it clear that there is no plan to move the Bolt onto the Ultium next-generation EV architecture (GM’s third, versus the Bolt and Bolt EUV that will remain on GM’s second-gen EV platform). As such, the revised Bolt will firmly be GM’s EV value offering, with an impressive amount of range from its slightly reduced 65 kWh battery, but not offering all-wheel drive, nor the latest charging technologies.

However, it will offer a much better interior than before, with upgraded materials at diverge from the hard plastics on all Bolt models up to now. Addressing other common concerns about the Bolt, the upcoming ’22 models will also all feature wider and more comfortable seats, plus the Bolt EUV will offer an embedded navi system, which means that drivers will still have GPS options if your phone has run out of battery or in another jacket. 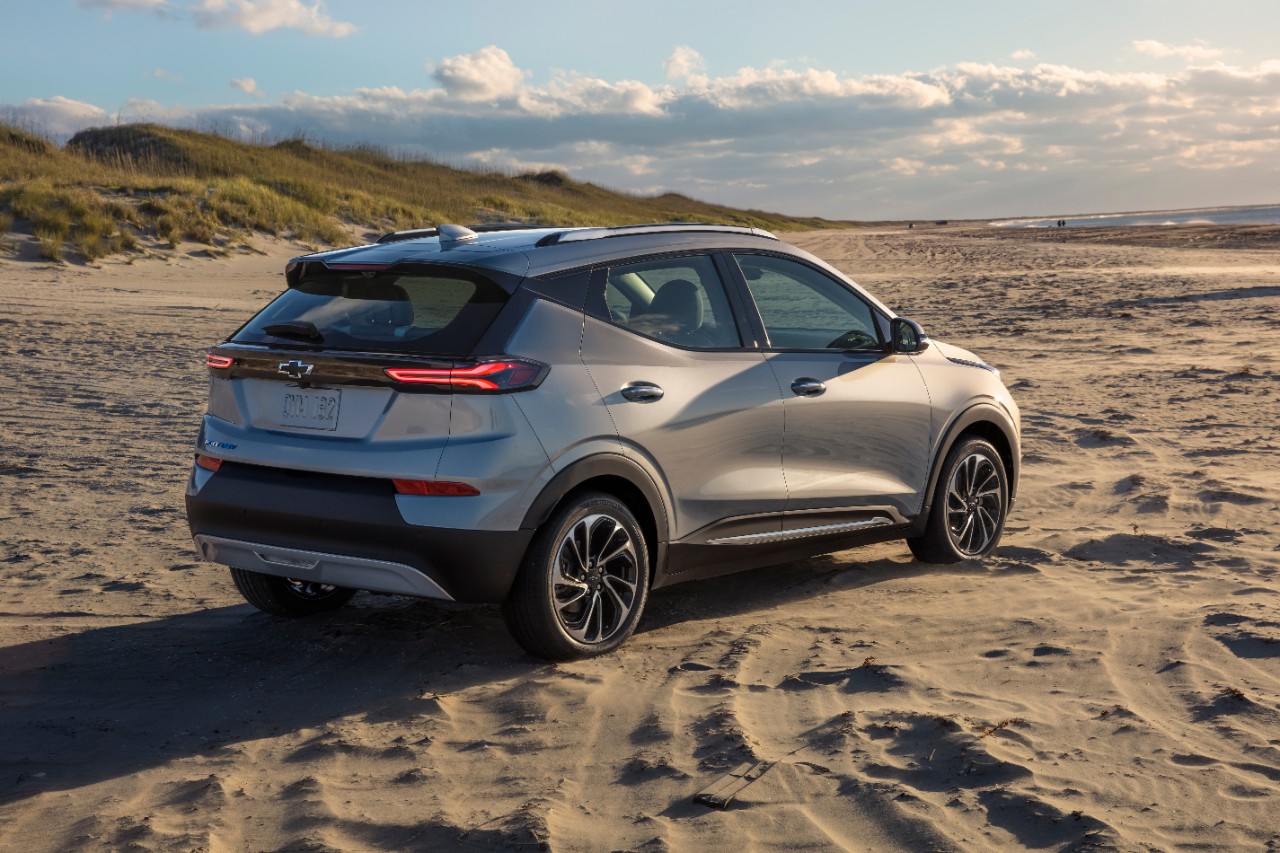 A new push-button transmission is also part of the more upscale interior, as is a flat-bottom steering wheel more in line with the Bolt’s hot hatch acceleration. The regen-on-demand paddle is still there for additional regenerative braking that can slow the Bolt to a stop while adding electrons. A heated steering wheel and seats are standard, with ventilated front seats and heated rear seats now available along with the pano roof in the Bolt EUV Premier.

Wireless Apple CarPlay and AndroidAuto are also part of the new infotainment system, which will offer over-the-air updates, as well as Alexa functionality. The OTA capabilities will remain strictly with the infotainment system, said GM, so no powertrain or range boosts will be available in this way.

The executives also noted that the current Bolt batteries are not affected by recent 2017-2019 Bolt battery recalls given possible fires upon full charging, in which GM has recommended owners only charge to 90% until a final solution is found.