Canada’s Atlantic Bubble has hints of a post-apocalyptic future

If you had “presenting documentation to enter an Atlantic province” on your 2020 bingo card, then go ahead and break out your brightest dabber. This weekend, the four Atlantic provinces agreed to permit each other’s residents to move freely across their borders without needing to self-isolate for two weeks. The only requirements? A couple of pieces of I.D. and, depending on the point of entry, enough paperwork to keep the region’s pulp and paper mills humming for weeks.

The latter is an exaggeration, of course, but only slightly. We hit the road bright and early from central Nova Scotia in a 2020 Toyota Sienna, headed for the land of Jean Coutou pharmacies and St Hubert restaurants (aka New Brunswick). Unlike countless trips in the past however, the visit actually started 24 hours prior with a visit to the NB government’s website where we could download and complete the appropriate self-declaration form, a tome asking questions ranging from travel habits to phone numbers.

Firing up one of the last V6 Sienna vans likely ever to be built (the model switches to an all-hybrid platform in 2021) while most of the province was still slumbering off Canada Day festivities proved to be a good idea, as the line of cars waiting to cross the checkpoint was comprised of just five vehicles, a marked difference from Opening Day when the queue of idling cars turned the Trans Canada Highway into a parking lot (or the Don Valley Parkway at 5pm, depending on your life’s experiences).

Cones and temporary barriers lined the road like frosting on a cake, funnelling commercial tractor-trailers to the right and passenger cars to the left. Three masked officers were on hand, standing outside the type of temporary tents one might see at a garden party or wedding. No one offered to toss the garter. What they did offer was to either take my pre-completed form or, as was happening with most cars, fill one out on the spot. Since the majority of travellers were opting for the latter, the massive lineups seen earlier in the week are easily explained. 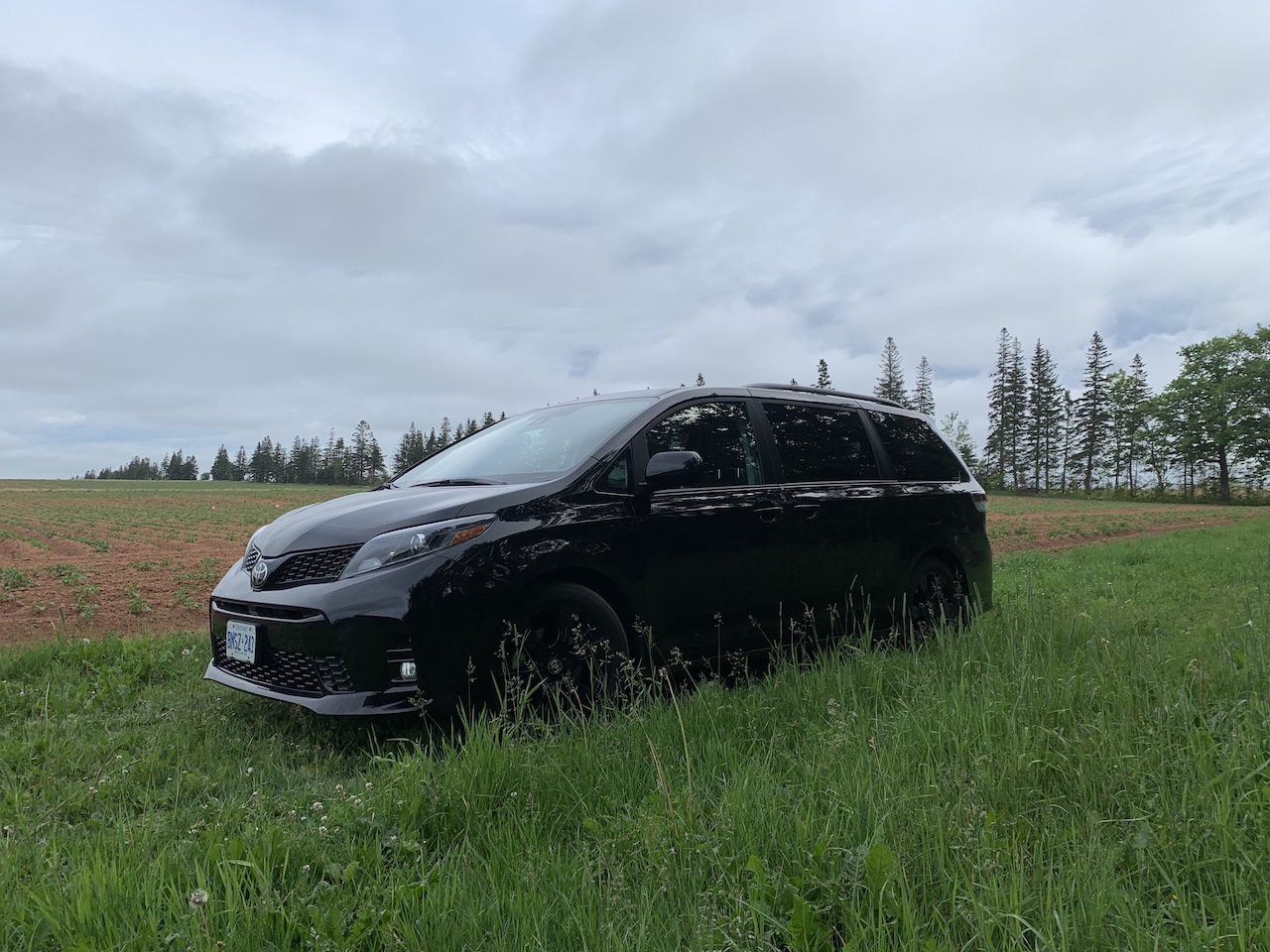 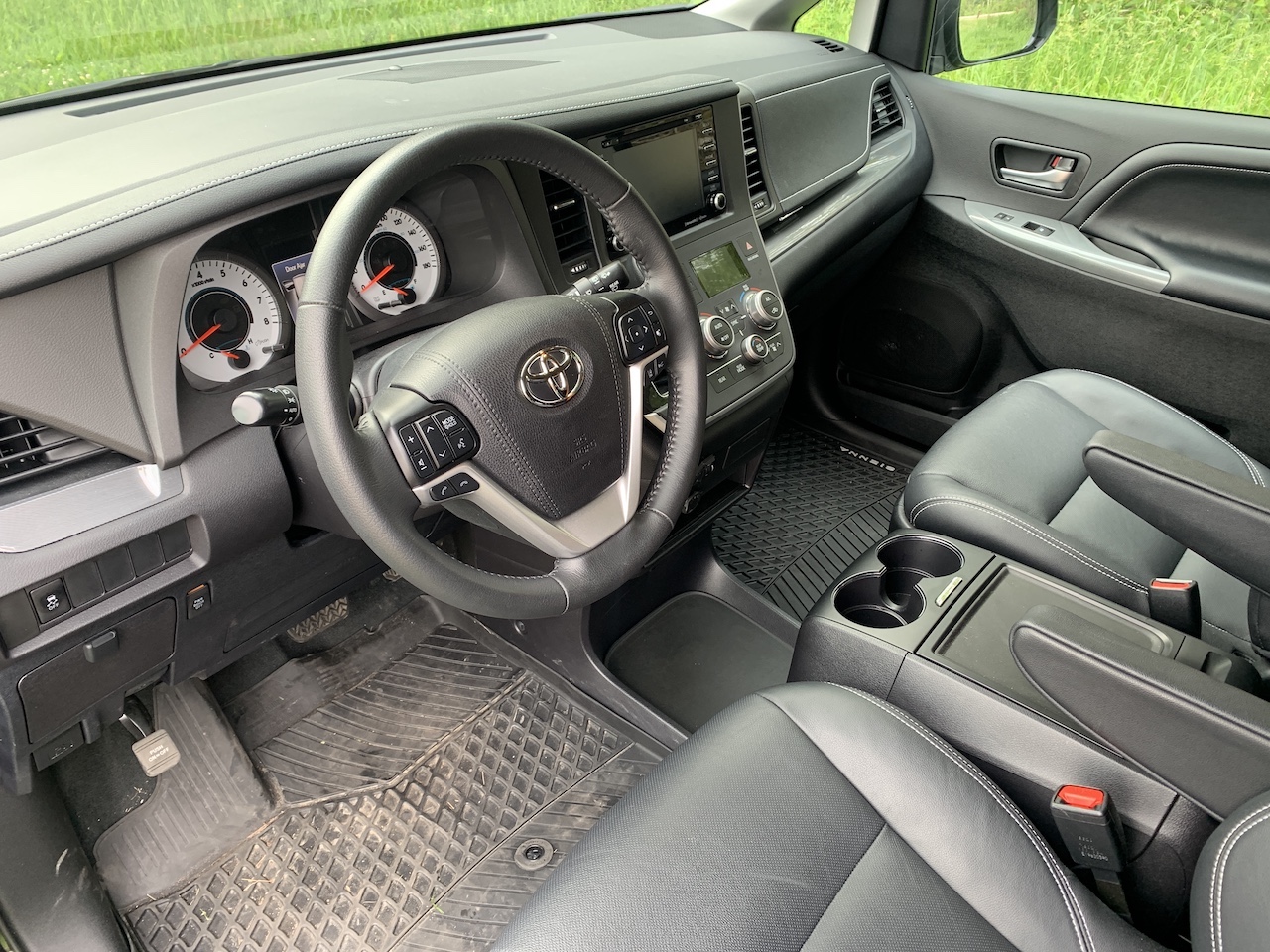 A quick flash of two pieces of government I.D. and we were on our way to the Confederation Bridge. Like most good Nova Scotia tourists, we visited New Brunswick only to get to PEI. Nevertheless, it was a straight shot on Route 16 to the bridge where we were greeted by digital signs straight out of a post-apocalyptic contagion movie, informing of the next checkpoint some 14km distant.

Message to the nation’s sign writers: surely there is some room for a bit of humanity in these warning signs. Yes, the pandemic needs to be taken very seriously but the sight of overhead gantries bearing words and images that could very easily have been taken from the pages of a Stephen King novel does nothing to lower anyone’s blood pressure. Some will say I’m being overly dramatic and they’re likely correct. However, the nation needs humanity and normalcy now more than ever.

In any event, the Confederation Bridge, for those who’ve never been, deposits its drivers in a broad patch of pavement on the red shores of The Gentle Island. Here, no fewer than five lanes of traffic-coned checkpoints awaited us and the Sienna. It’s worth noting that, as of this writing, PEI asks those arriving to the province to complete a mandatory self-declaration for ahead of time, answering questions about your health the planned length of your stay.

Clicking ‘submit’ on this form generated a Very Official confirmation number, one which was requested of us by a stern but maskless border agent who then asked for two pieces of identification. My medical card was rejected as it had expired a month prior and I had neglected to populate my wallet with the new one. This, despite it being accepted with no trouble at the NB border just thirty minutes prior. A digital pay stub bearing my home address was a sufficient substitute. 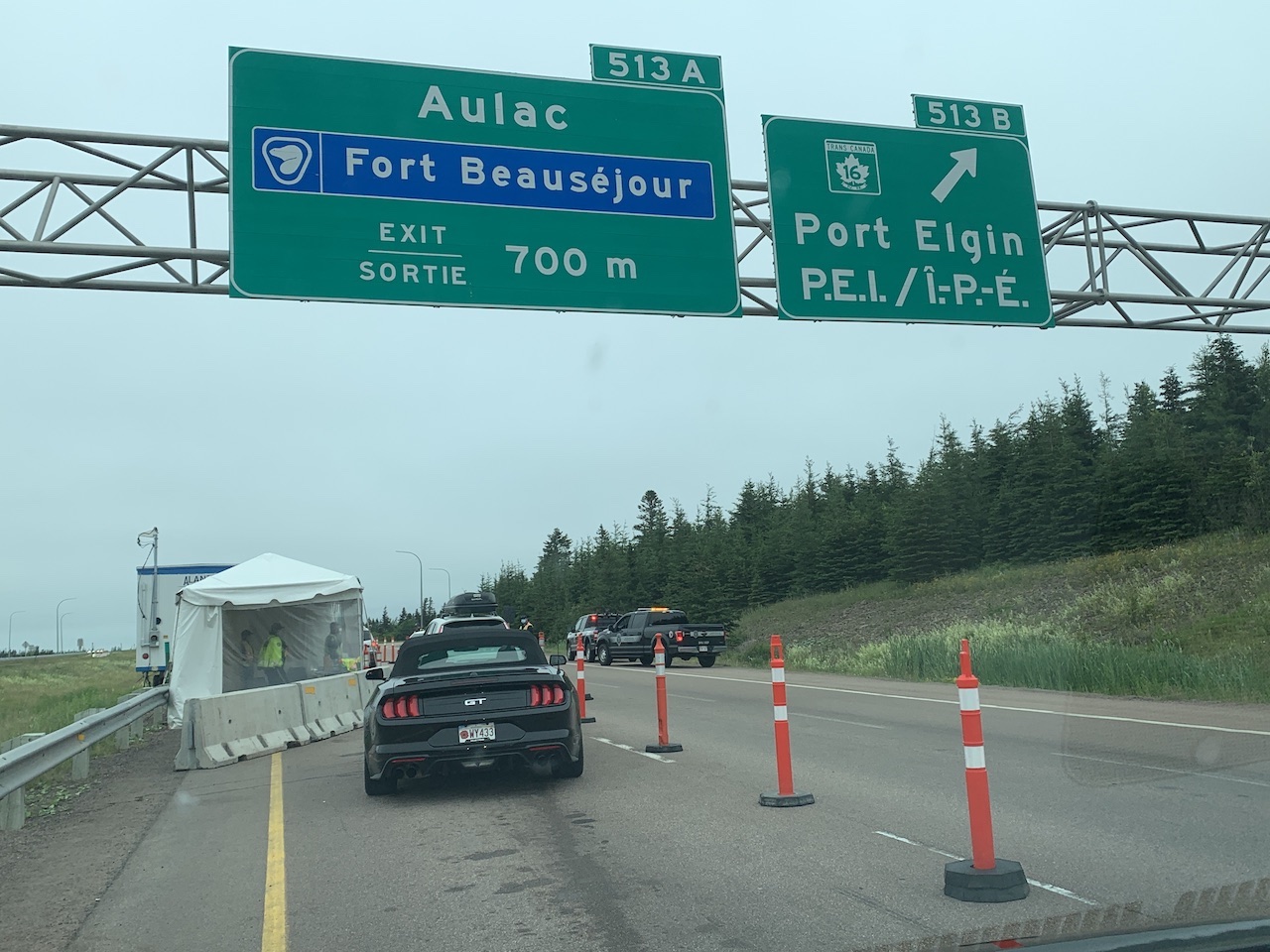 Touring the island was a pleasant as ever, with warm weather and whip-straight roads being the order of the day. Still, we were mindful of the ongoing pandemic, limiting our time outside the van and staying away from usual tourist spots like the Cavendish boardwalk. Still, we juiced the island economy with a purchase of PEI Handpies (bacon and cheddar, of course) and hot drinks at a local coffee shop. Masks and gloves abounded at both places, by the way.

Headed back to the mainland, an attendant at the Confederation Bridge presented us with an Interac machine taped to the end of a hockey stick so we could pay the one-way bridge toll. If only we were wearing plaid and had the foresight to cue up Rush or The Tragically Hip.

Tucked in one of the Sienna’s many storage cubbies was another completed form for entering New Brunswick, prepared the night prior in an effort to save time. Approaching bridge’s end, it was easy to see the enormous line up of traffic snaking along the access road that cuts along the shore and under the bridge itself, a strip of tarmac generally used to access the tourist information centre. Today, it was being used to funnel cars into the new checkpoint.

Interestingly, as we began to follow the detour, an official began diverting traffic back onto the highway and into New Brunswick, bypassing the checkpoint altogether. We may have offered a muttered invocation to the traffic gods, or whatever ecclesiastical deity to which you bow, for not having to wait an hour or more in the checkpoint lineup. However, it must be noted that we – and several other cars – passed into the province freely and without scrutiny. 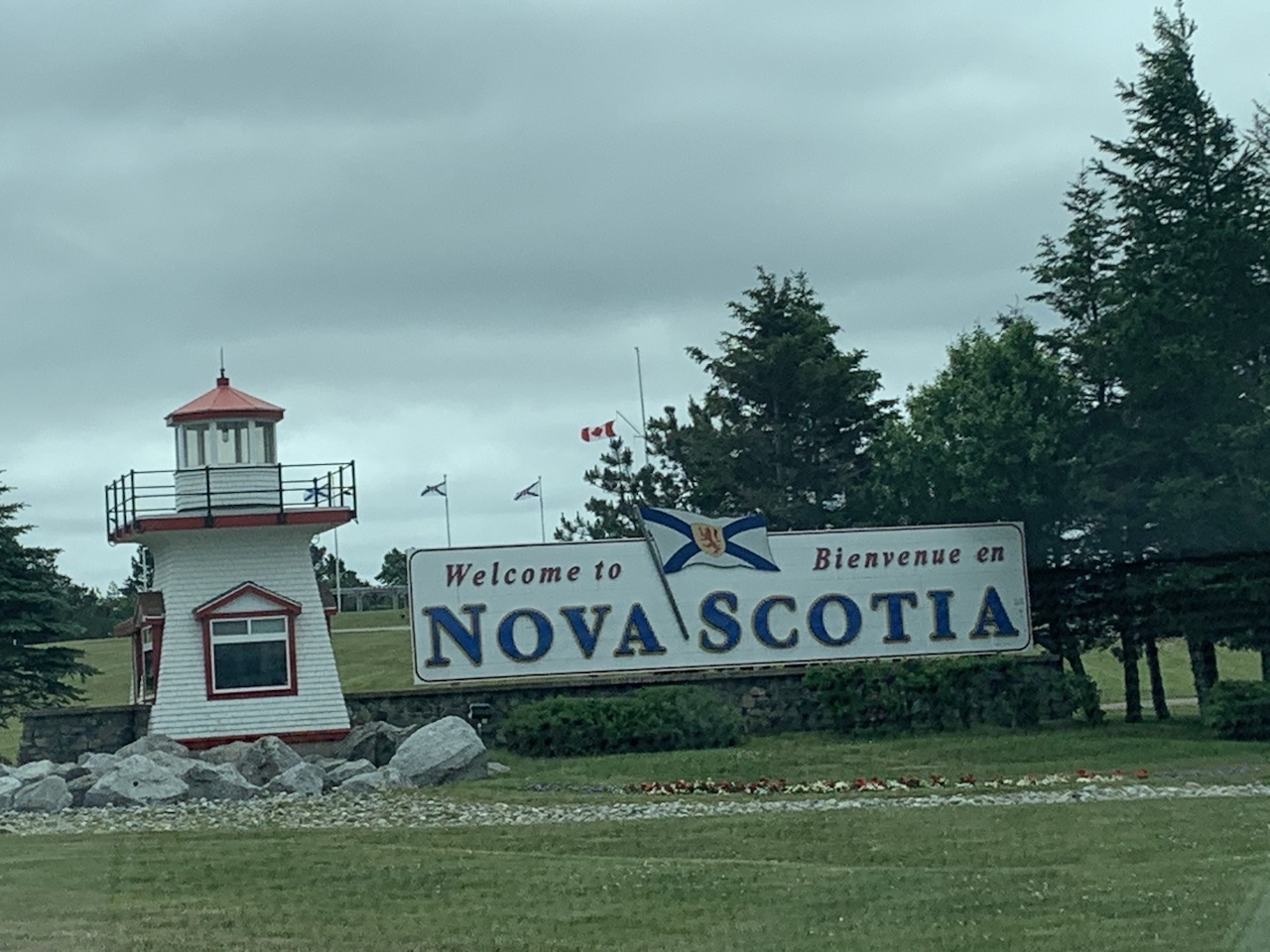 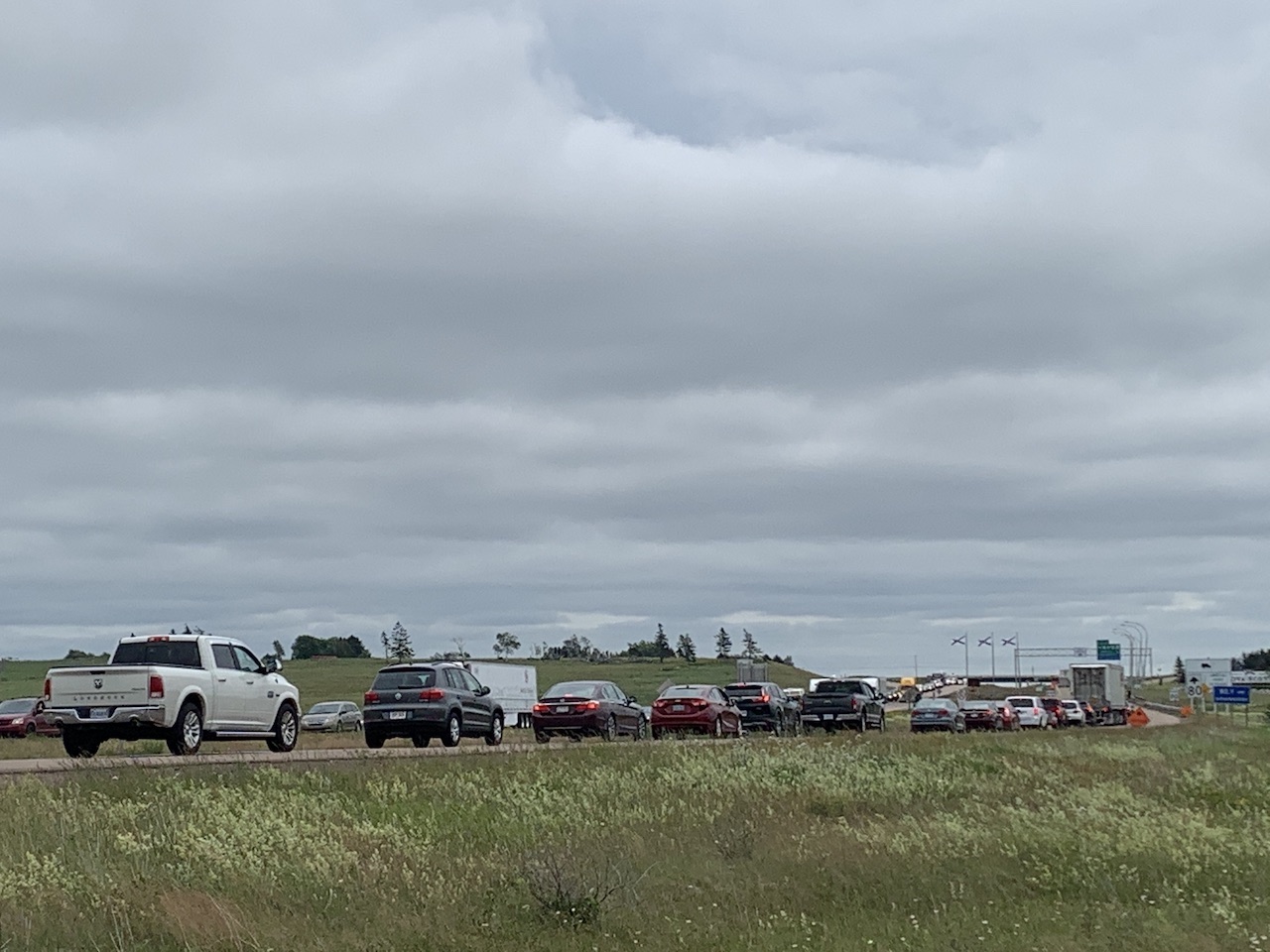 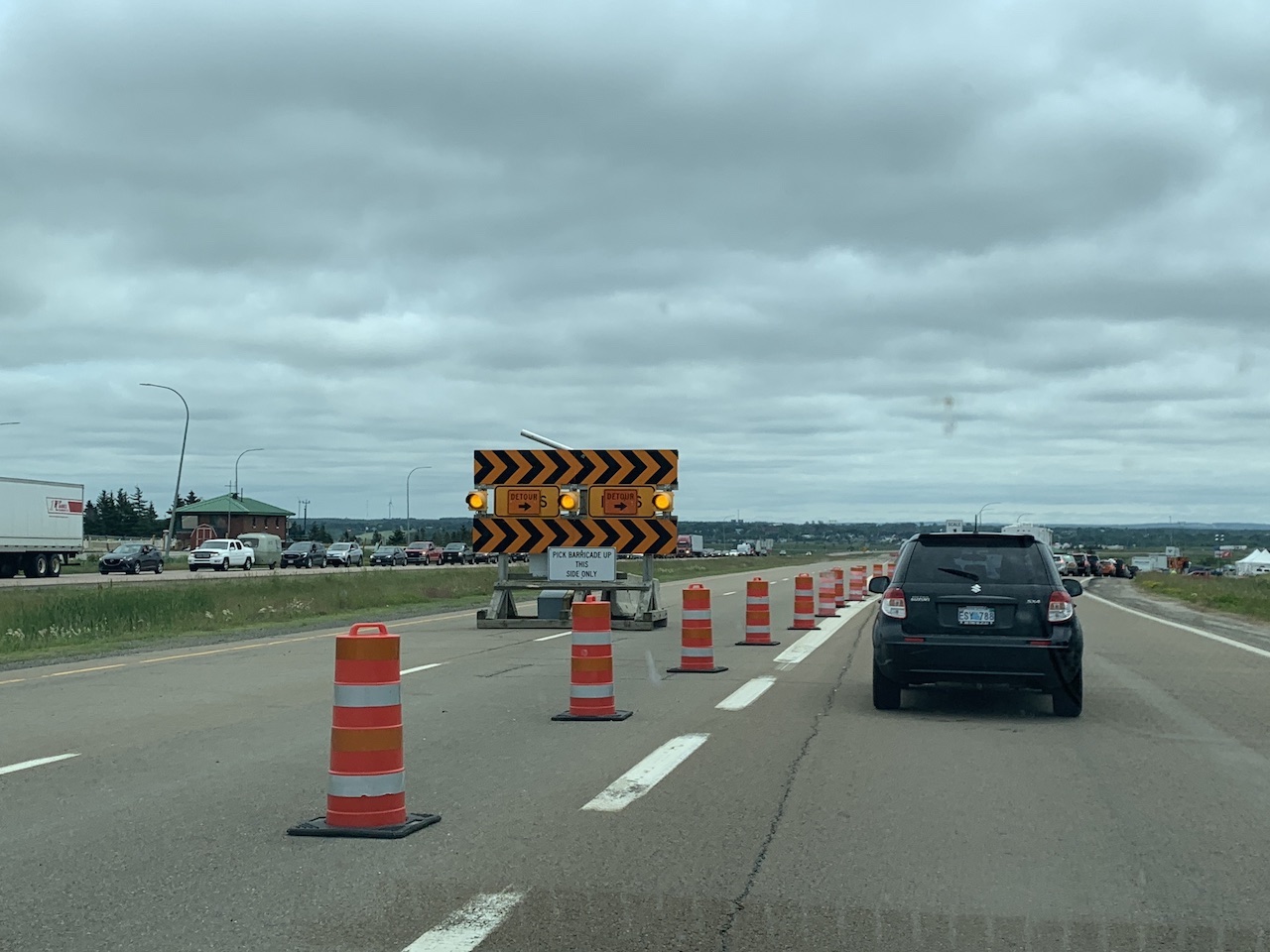 It was a similar experience returning to Nova Scotia (yes, we passed through NB again without stopping – mon dieu!) where socially distant but mask-free agents only asked that I hold my NS driver’s licence aloft for scrutiny before sending us on our way. Five hours made quite a difference in traffic volume compared to our 8:00am visit, however, with vehicles lined up for about 1.5km on each side of the NS/NB border.

So what did we learn? Well, the Toyota Sienna ran the gamut without complaint, offering up plenty of space and comfort for our merry band of Bubblers. Whether one chooses to ante up for this 2020 model or wait for 2021 is largely a decision between pay-now and pay-later. With the new hybrid-only van on the horizon, Toyota stores may be willing to cut a deal on existing inventory. However, its more efficient replacement will likely blow our observed fuel economy of 10.0L/100km right out of the water.

As for the Atlantic Bubble, a new spate of infections have since cropped up on PEI, proving that viruses don’t care very much about borders. These cases have been linked back to a visitor from outside the Bubble who failed to self-isolate after arriving. If you’re choosing to travel this summer, be sure to take along masks and a bottle of hand sanitizer. Gloves wouldn’t hurt either. A good dose of common sense, and common courtesy, will go a long way in providing a safe environment for everyone.

But an Interac machine taped to a hockey stick? Even I didn’t have that on my bingo card for 2020. 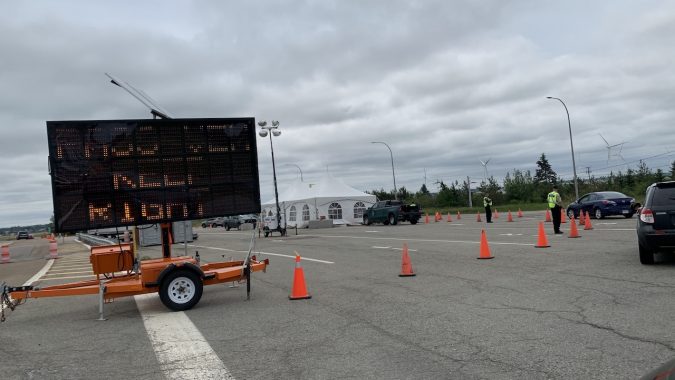 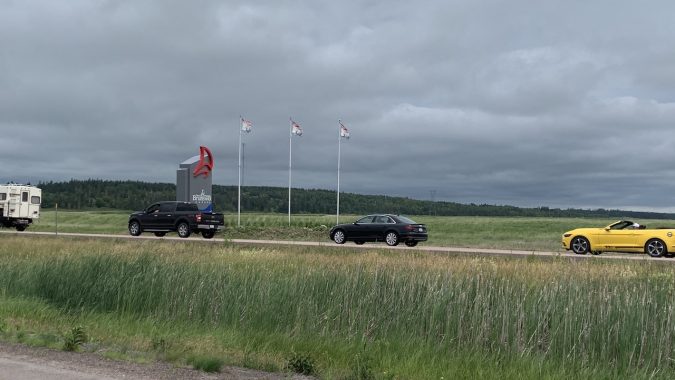 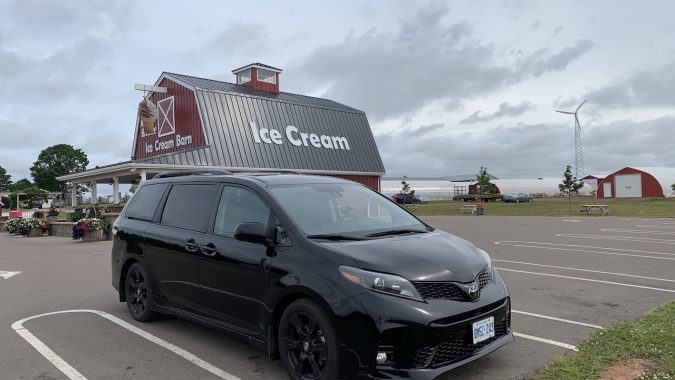 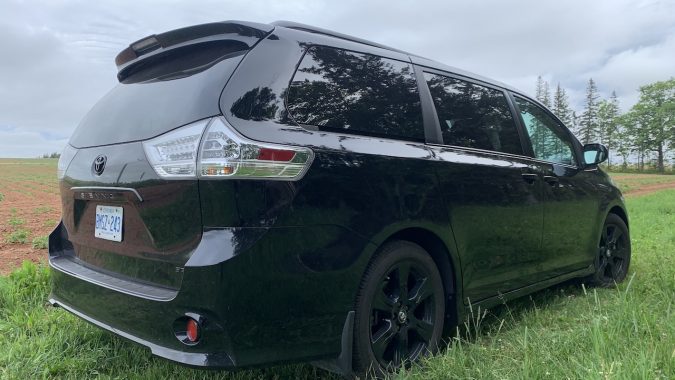 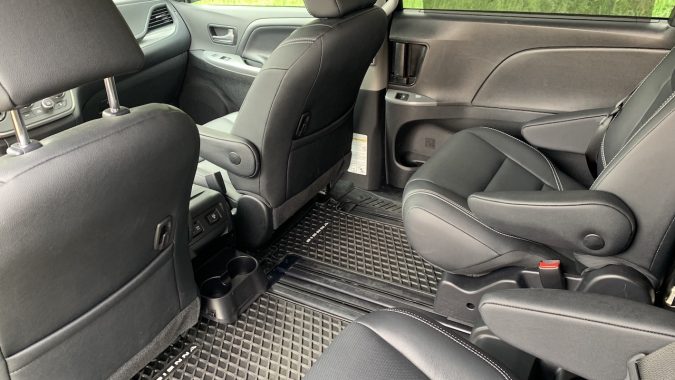 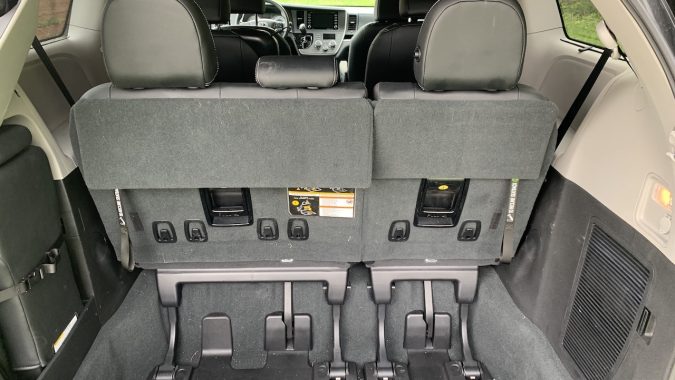 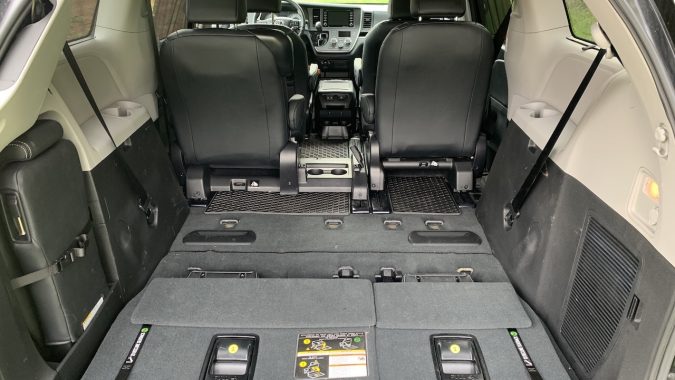 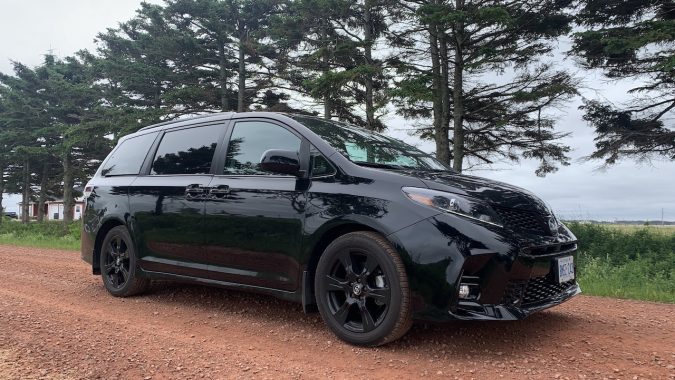 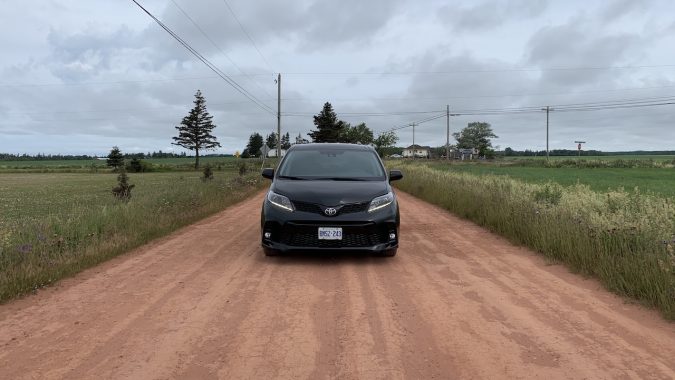 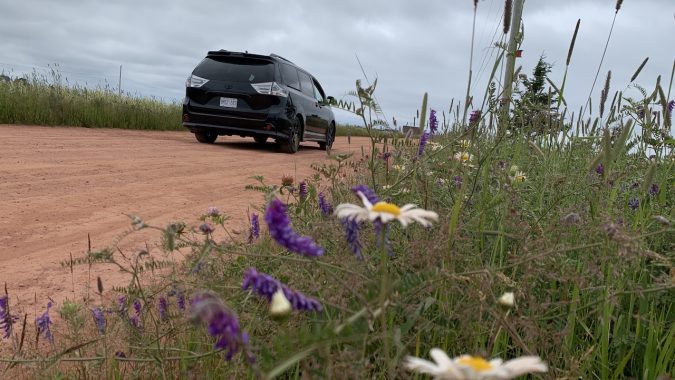