Traffic Jams on Bloor, Yorkville in the Sixties and a Cop Car in a Bike Lane

Taking a walk downtown while killing time can leave you puzzled (particularly when you haven‘t been there for awhile).

When you’re riding public transit, you have time to think and to remember.

I was on a GO train and I was riding the rails because I no longer drive in downtown Toronto. Between construction, bike lanes, out-of-sequence traffic lights that guarantee you can’t go more than a block without having to stop and not many places left to park, it’s a pain to drive down there.

I was in the city to see my dentist and a doctor, and had several hours between appointments, so took the subway up to Bloor St. to wander around. It’s been awhile.

The first thing I saw after emerging from the underground was a traffic jam along Bloor going east. This backup went from Avenue Road in the west to Sherbourne and was caused by the War on The Car that has raged in Toronto for years.

Where once there were two lanes going east; there is now mostly one. There is a bicycle lane out from the curb, then there is a lane for planters that widens periodically for a car to park, then a lane for traffic. Take one complete lane away from cars and you’ve cut traffic density by 50 per cent. Add the out-of-sequence lights and you’ve got chaos.

Now, every time I mention bike lanes, I get in trouble. I wrote a column awhile ago and the people who edit the Star’s letters-to-the-editor told me they could have published two full pages of them. Of course, many of those who wrote hadn’t read my column. Instead, they saw (or heard about) the headline and that was enough to trigger outrage.

But for years, I have promoted the installation of bike lanes downtown. So those bike lanes along Bloor are not part of the War on The Car. But a lane for planters that widens on occasion for a car to park? Somebody has to be kidding.

I felt sorry for the cyclists on the day I was there. Even though there are spots reserved for parking, which can be used by delivery trucks, the truck drivers insisted – as they always have – on pulling right into the curb, thus blocking the bike lane. Which meant the cyclists – and I stood there for 10 minutes, taking all of this in, and counted the bikes as they were ridden past (18) – had to pull out and around those trucks.

Trucks were bad enough, but they weren’t the only interlopers. About 20 yards east of the Intersection of Bloor and Yonge, on the south side, smack-dab in the middle of the bike lane, was a City of Toronto Police car. I was fascinated and stood there for another 10 minutes (23 bikes went past while I was standing there this time), waiting for the officer or officers to return from wherever they’d gone and move that car. I finally got tired of waiting and moseyed off toward Yorkville. 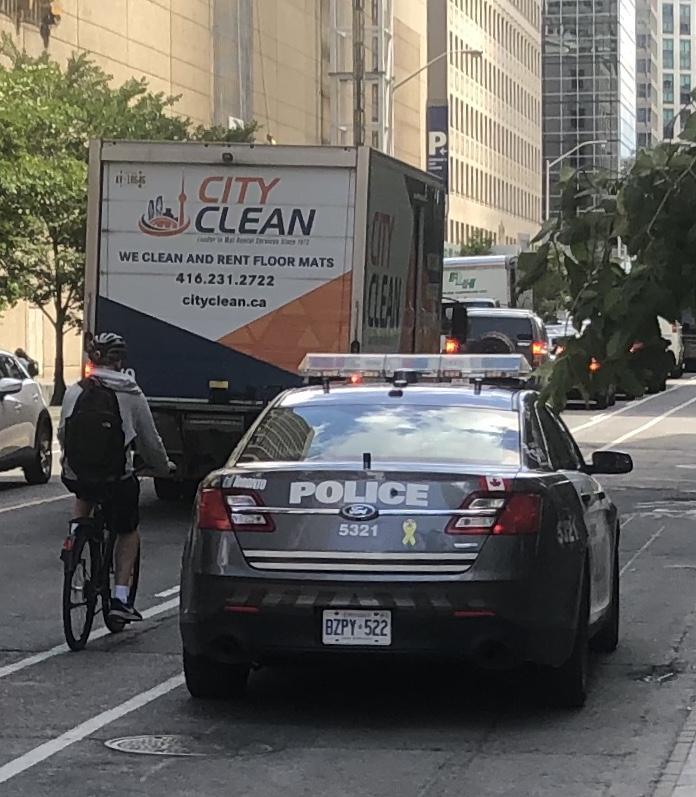 While I was walking, I recalled an incident many years ago that made me aware of the dangers of riding a bicycle on the streets of Toronto.

I was going driving south on Church St. and there was a large truck parked against the curb, blocking the bike lane and part of my lane. As I started to pull out to go around it, a cyclist riding the wrong way in the bike lane was suddenly coming right at me. I had to stop. Suddenly.

I got out to find that a cyclist following behind hadn’t expected me to stop and had run into the back of my van, breaking my left taillight and hurting himself in the process. He’d swerved to avoid me but hadn’t made it and his hand had smashed the light. His knuckles were cut and bleeding.

We both apologized but neither of us was at fault: the truck blocking the bike lane was the real culprit, followed by the cyclist riding north in the southbound bike lane. We exchanged names and phone numbers but there was no follow-up because there wasn’t a reason for one. It cost me about $250 for a new taillight; he, presumably, put a bandage on his hand.

So, I wandered around Yorkville for awhile, reminiscing about the Sixties and watching the Allen-Ward Trio at the Purple Onion, and Michael Steele and Josh White Jr. taking turns with Allan McRae at The Place, and Gordie Lightfoot and Ian & Sylvia singing at the Riverboat and does anybody else remember Joan Anderson (who later became Joni Mitchell) at the Penny Farthing and Neil Young at the Mynah Bird?

And then I went back to Bloor and Yonge to catch the subway and by now it was an hour later and that cop car in that bike lane was still there. No wonder Toronto cyclists get cranky.

Norris McDonald is a retired Toronto Star editor who continues to write for Wheels under contract. He reviews the weekend’s auto racing every Monday at wheels.ca