This next generation hydrogen powered fuel cell vehicle (FCV) is not only powered by hydrogen but takes the concept a step further by using its fuel cell to double as a source of electricity.

For years, automakers have been dabbling with the concept of deploying hydrogen as a power source for their vehicles. It makes a lot of sense: hydrogen is a clean, renewable source of energy and is one of the most abundant elements. It actually makes up about 75% of the mass in the known universe. That’s right; approximately three-quarters of everything is hydrogen. At this year’s Canadian International Auto Show, Feb 17 – 26 in Toronto, show-goers can check out Toyota’s effort in the hydrogen arena.

As the number one element on the periodic table, hydrogen is a powerful combustible element comprised of one proton and one electron, so it makes sense to explore its use as a fuel. Various scientific eggheads and people much smarter than this author are working on efficient ways to collect and store mass amounts of hydrogen. In the meantime, Toyota has forged ahead and created the innovative FCV Plus.

This next generation hydrogen powered fuel cell vehicle (FCV) is not only powered by hydrogen but takes the concept a step further by using its fuel cell to double as a source of electricity. The FCV is aslo capable of generating electricity via hydrogen from external sources, and when parked it can power one’s home or feed electricity back into the grid, actually becoming a stable source of electric power.

Think about that for a second: after the FCV Plus shuttles a driver and their family to work, school, and hockey practice, it can share its power generation capabilities with communities as part of the local infrastructure. The concept can genuinely use hydrogen to generate energy and become a stable power source.

The fuel cell stack itself is mounted between the front tires, with the hydrogen tank tucked away behind the rear seat. Deploying independent in-wheel motors on all four wheels, this configuration allows for a spacious cabin despite the vehicle’s compact body. By concentrating functional parts at the front and the rear of the vehicle, this next-generation fuel cell vehicle package creates an optimal weight balance and a broad field of vision.

Its compact fuel-cell is detachable and can be used as a portable generator, which would be very useful in rural areas and isolated communities. Hailing from small-town Newfoundland, I can appreciate this feature. Light and compact in design, the fuel-cell minimizes weight and maximizes cabin space. Miniaturizing the fuel cell stack and other components of the fuel cell system helped create a light and compact vehicle ideal for city use. Its efficiency is enhanced by advanced aerodynamics, in the form of both the bold exterior shapes and the smooth belly on the FCV’s underside. Words and symbols can be displayed on the windshield and rear window to help others recognize the vehicle’s condition. 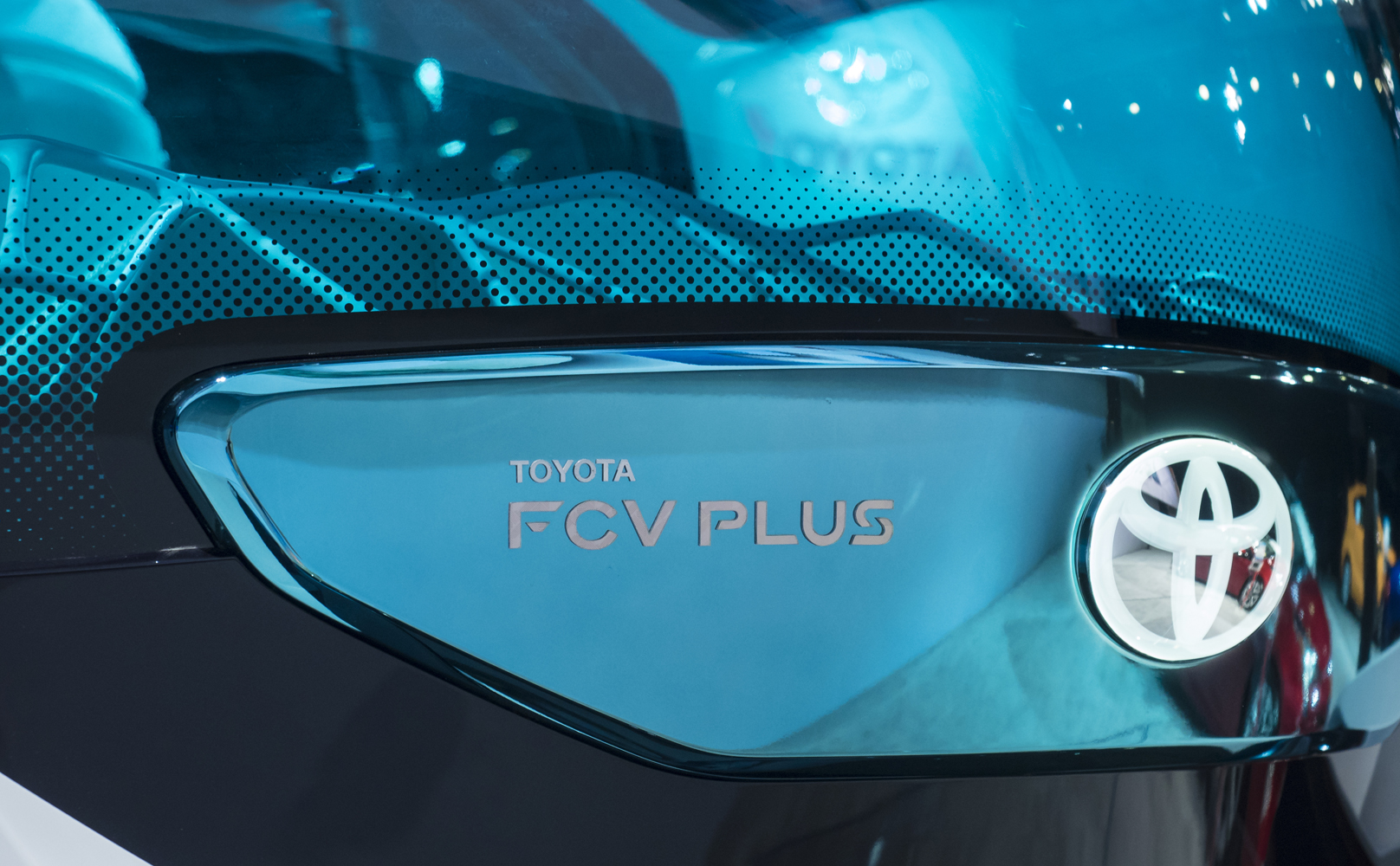 Sounds great, right? An abundant supply of fuel with powerful combustion properties and zero emissions. So why isn’t everyone driving hydrogen-powered cars? Well, the current limiting factor on all this is our level technology for making, transporting, and storing the actual hydrogen needed to power cars like the Toyota FCV Plus. Hydrogen is difficult to transport in the quantities needed to power fleets of vehicles, so this technology is still a few years away from becoming widely available. Fossil fuels won’t be around forever, though, leading us to speculate that vehicles like the Toyota FCV Plus are the way of the future.