In celebration of the brand’s 50th anniversary in Canada, Toyota has released two limited-production special versions of the Corolla and RAV4. both will be available exclusively to Canadians

In celebration of the brand’s 50th anniversary, Toyota Canada has released two limited-production special versions of the Corolla and RAV4. Both are built exclusively in Canada (the Corolla in Cambridge, ON, the RAV4 in Woodstock, ON), and both will be available exclusively to Canadians.

It’s fitting that these two models in particular are the go-to models for Toyota when it comes to 50th Anniversary special; both are huge sellers for the brand, and both represent the qualities of safety, reliability, durability and innovation that Toyota focusses on for their vehicles. Remember; when it debuted in 1994, the RAV4 was a pioneer of the small SUV/crossover craze that continues to sweep through Canada today. The Corolla, meanwhile, continues to be one of the highest-selling passenger cars not just in Canada, but the world as a whole, with over 37 million sold worldwide since its inception in 1966.

In addition to the RAV4 and Corolla, Toyota’s subsidiary, Lexus, also produces the RX 350 and RX 450 Hybrid models in Cambridge, meaning that over half the vehicles sold in Canada today are also produced in Canada. That’s pretty good, considering Toyota has sold 4.6 million vehicles in Canada to date.

Evidence of the lessons learned by Toyota over the years of being in North America have led to a host of awards, with the most recent J.D. Power Initial Quality study leading to the Toyota Corolla, Sienna, Tundra, Tacoma, Camry, Avalon, FJ Cruiser, Scion tC and Lexus LS and GS all finishing within the top three of their respective categories. The Lexus ES sedan, meanwhile, was named the highest-ranking in the Compact Premium Car category.

The most striking element on this eye-catching Corolla is the exclusive Absolutely Red exterior colour, matched by black gloss17-inch multi-spoke alloy wheels, both standard features of the 50th Anniversary Edition. You can also have it in Alpine White, Slate Metallic or Black Sand Pearl but really, why would you want to? That red is sharp, and most befitting of a special model like this.

Plus, it does well to compliment the interior enhancements, which include black seating with red stitching to match the exterior colour. Other interior enhancements that do well to separate this particular ‘Rolla with others are the glossy piano black finish around the centre stack, plus brushed silver trim on the doors, dash and centre console. It really is a Corolla like you’ve never seen before. If you’re interested, however, you’d better hurry up; just 2,000 of these will be made, and at the rate that Corollas sell, well, they won’t be around for long. 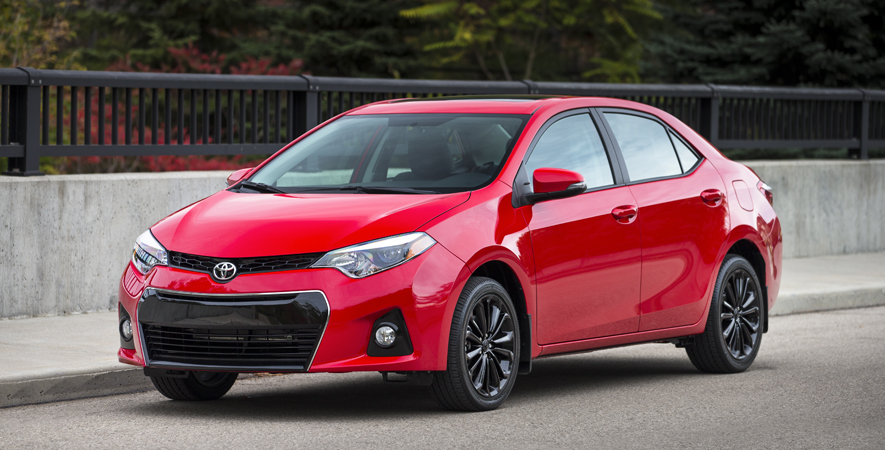 Not to be outdone by its smaller sibling, the RAV4 50th Anniversary Edition is sure to draw stares as well.

Also available in that very Canadian Absolutely Red colour, the special package is only available on the top-spec AWD XLE trim. Sharp 18-in alloy wheels with a unique alloy finish are an inch up on those found on the Corolla, and display more of a luxury attitude as opposed to the performance-oriented digs found on the Corolla.