Toyota Canada: Investing in Canada for the Future

Toyota’s mission statement—while focusing primarily on the company’s people-moving attributes—includes a focus on producing vehicles to the best of their abilities, and doing so with an eye to helping the planet innovating, and engaging with Canadian communities.

As one of the world’s leading automotive manufacturers (its Cambridge and Woodstock, ON manufacturing facilities alone have built over 6 million cars), there’s a lot going on at Toyota today. Exciting new releases like the 2016 Toyota Tacoma pickup, as well as some innovative concepts like the Mirai hydrogen-powered compact and FT-1 supercar (which is available as a vehicle in the Gran Turismo 6 video game), point to a bright future for the brand.

The innovations at Toyota go even further. Toyota’s mission statement—while focusing primarily on the company’s people-moving attributes—includes a focus on producing vehicles to the best of their abilities, and doing so with an eye to helping the planet innovating, and engaging with Canadian communities.

Other than sponsoring the re-imagination of a group of deteriorating heritage buildings just outside of Toronto’s downtown core and creating a community environmental centre, the Evergreen not-for-profit organization has also partnered with Toyota and its dealerships to help get more use out of our nation’s school grounds.

Unused areas of school grounds are used to plant trees, shrubs and even butterfly gardens and meadows. In addition to making better use of unused areas, students also get a hands-on learning environment. Today, over 1 million students from across the country have benefitted from the partnership.

Of course, if gardening and horticulture isn’t your child’s cup of tea—perhaps they have a more mechanical bent—then Toyota’s kartSTART go-karting program will be just the ticket.

This half day course gives kids the chance to get behind the wheel of go-karts and be taught by professional instructors. And you don’t have to be of legal driving age to participate; since kartSTART takes place on a closed circuit, kids get the opportunity to start leaning about vehicle control and safety while piloting their own car.

As a bonus for parents, presentations about Toyota’s STAR Safety System and the features it provides also takes up part of the day. The basics of driving aids like Anti-Lock Brake System, Electronic Brake-Force Distribution, Vehicle Stability Control, Traction Control, and Smart Stop Technology are outlined.

The events take place across Canada throughout July and August, with stops in Chilliwack, Edmonton, Saskatoon, London, Toronto, Montreal, Trois Riviѐres and Moncton. 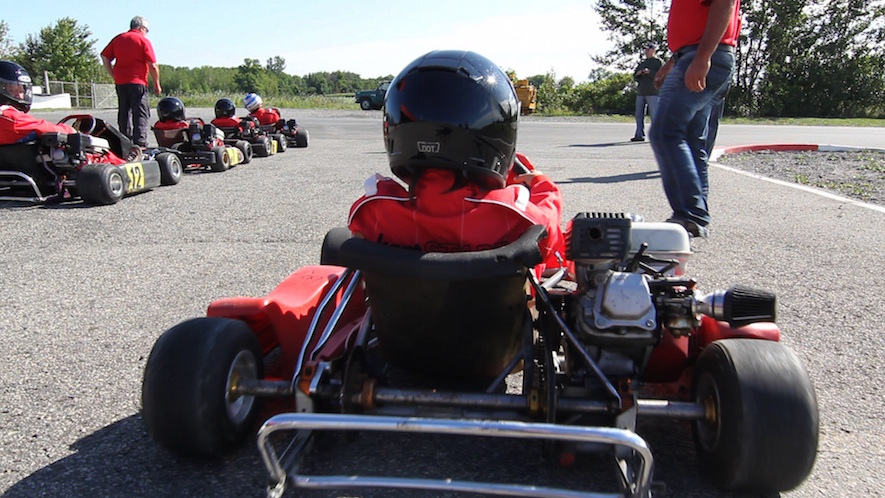 Toyota developed the Star Safety System that includes Anti-Lock Brake System, Electronic Brake-Force Distribution, Vehicle Stability Control, Traction Control and Smart Stop Technology. In addition, beginning in 2015, Toyota will introduce “Toyota Safety Sense” packages that will be available across most passenger models and grades in North America by 2017, including features such as: a pre-collision system to reduce or prevent a forward collision, lane departure alert to keep the car in its lane, and automatic high beams ensuring excellent visibility during nighttime driving.

In North America, so far confirmed only for customers in California (just 700 were produced in 2015, but that number is set to increase to 2,000 in 2016 and 3,000 in 2017), the Mirai represents an important step not just for Toyota, but for the automotive industry as a whole.

Much like they did with the original Prius hybrid all those years ago, Toyota is once again getting set to usher the next sustainable advance in motoring: hydrogen power.

The Mirai (Japanese for “future”) uses hydrogen gas combined with oxygen—all natural elements, of course—to help power an electric motor that makes 153 horsepower. It can refuel in three-five minutes on the way to a 300-mile (or about 483 kilometre) range. The Mirai’s emissions? Nothing more than water vapour.

When one considers that so much carbon dioxide (CO2) emissions come from small motors—like that of a generator—the benefits to the environment provided by the Mirai come more sharply into focus.

Whatever it may be, the one thing that can be said of the i-ROAD is that it’s innovative. First of all, a turn of the wheel doesn’t just turn the car, but actually has it lean, downhill skier-style, into the turn. So you get that airy sensation of riding a bike, but with the stability of a car.

Secondly, it’s one of the smallest full-electric cars available combining the compactness of a scooter, with the protection and comfort of a car (and no, you don’t need a helmet). Yes, that may sound like something we’ve seen or heard of before, but Toyota has already been testing the i-ROAD on the road in Grenoble, France and Tokyo, Japan. Those tests have helped Toyota claim 50 kilometers of range and, of course, zero CO2 emissions.

Watch this space for a video look on how the i-ROAD works out on, well, the road!

It’s an exciting time both for Toyota and the industry as a whole, as these advancements are sure to benefit the entire industry in the coming years.