Join the Conversation (0)
LOS ANGELES, CA - Toyota is justifiably best known for its hybrids, dominating that market as Tesla now dominates the battery electric vehicle space. But on top of the new Prius and plug-in Prius Prime Toyota unveiled around the LA auto show (just outside it, technically), the company also brought to the show its own BEV future offering: the bZ SUV Compact SUV concept.

And though there was no official confirmation that this is one of the dozens of EVs Toyota has vowed to bring to market in the next eight years, there were various signs that the attractive concept could be its next production BEV model planned for North America.

The first is its launch location in LA, in the middle of a continent still riding a growing wave of crossover and SUV sales – including in Canada. Another is that the company trumpeted the concept as a “nod to the near future” (emphasis mine).

Toyota publicly stated in 2021 that it plans to introduce a family of 30 all-electric vehicles globally by 2030, and reiterated that it plans a family of five bZ models. The first was the Venza-sized bZ4X that is re-entering the market now after a recall soon after its mid-year launch, along with its corporate stablemate, the Subaru Solterra. Both however are “available” in very limited numbers, especially outside of BC and Quebec, the only provinces so far to have zero emissions vehicle mandates. 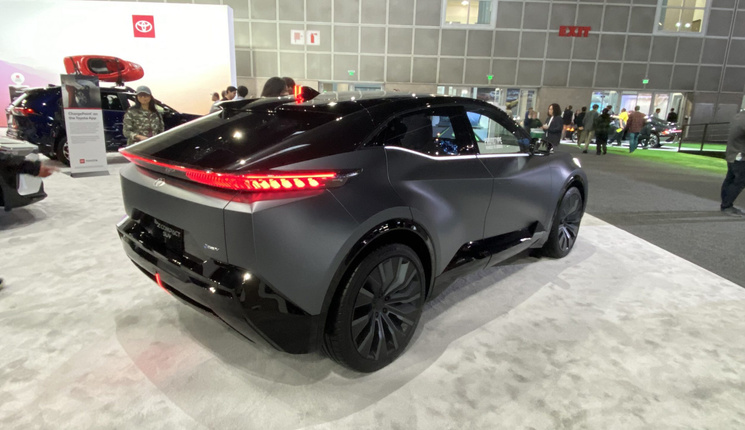 When the bZ SUV Compact SUV concept was first shown in Japan late last year, Toyota said it was planning a family of five bZ models, without specifying where or when those models would be available, outside of that long-term 2030 timeline.

At the LA show, the concept was actually labeled a “Prototype” vehicle, which in automotive industry parlance usually indicates a concept that’s closer to production than a “concept” vehicle.

“We’ve only just begun to scratch the surface of the Beyond Zero moniker,” said Toyota group vice-president and general manager David Christ of its North American debut. Interestingly, its latest release about the bZ Compact SUV Concept mentions its goal of 30 BEVs, but not the 2030 timeline.

Has that timeline been pulled up since? Or pushed back further? Difficult to tell, but there have been recent reports that Toyota executives at the highest level in Japan may be re-evaluating their relatively pessimistic views and conservative corporate plans on battery-electric vehicles, which reportedly may result in major upcoming changes to their BEV plan in the first quarter of 2023.

Toyota is relatively light on specific details about the concept itself. The company promises “dynamic” performance, eco-friendly materials inside, and leading technology, with no mention of potential range, battery size or dimensions. In person, it’s roughly the size of Toyota’s CH-R, so presumably would line up in the market against the Hyundai Kona EV and small Kia EV crossovers.

The concept’s seats are made from plant-based and recycled materials, with a voice-based “personal assistant” that responds to requests from both the driver and passengers. There are also moving LED lighting elements inside and outside the vehicle, the LED strip under both side windows an especially distinctive.