From the custom wood to the paint to the fibre-optic starry night sky, visit to Rolls-Royce’s Goodwood luxury factory in West Sussex reveals why perfection comes with such a high price.

He’s making a Starlight Headliner that — even at a cost of about $14,000 here in Canada — is an option 65 per cent of Rolls-Royce buyers request. It takes 2 ½ days to complete and, when installed, the privileged motorist will have 1,340 of the night sky’s stars twinkling overhead.

I’m not sure if Kowlczyk is working on one of the two standard templates (continental Europe or U.S.) or a bespoke request that will cost an additional $10,000. Many customers want the night sky that appeared when and where they were born. “Tokyo, August 17, 1952? Very good, sir.”

And such is the way at the modern Rolls-Royce factory on the Goodwood Estate in West Sussex. After taking stewardship of the Rolls-Royce brand in 1998, BMW opened this facility in 2003, where the 110-year tradition of hand-building the world’s most prestigious automobile continues with love and pride.

“Bespoke” is a word bandied about here quite a bit. All Rolls-Royce models have a base price, but you’ll see a flying pig before finding a Roller that hasn’t had every detail from the paint, leathers, wood veneers and myriad upgrades meticulously optioned by a customer.

Kowlczyk’s Starlight loom (one of seven) is just a meat-pie’s toss from the Ghost/Wraith line that moves along at a snail’s pace. The cars stay at each station for 90 minutes. It’s even slower on the flagship Phantom line, where each stop lasts for 2 ½ hours. 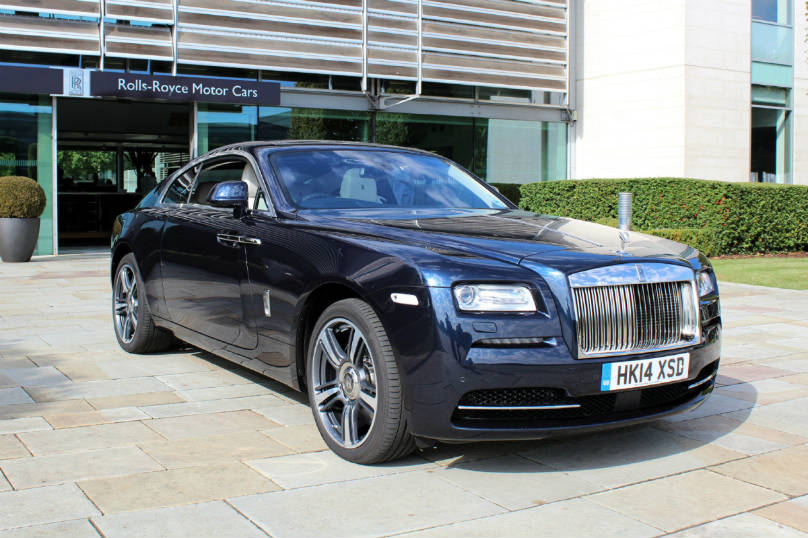 There is a sense of calm in here. No one is in a hurry. The only robots are in the paint shop . . . er, surface finish centre, where 30 kilos of paint is applied in one go — followed by three layers of clearcoat. A former local sign painter, Frank Court, hand paints the coach lines (pinstriping to you and me) with brushes made from ox and squirrel hair. He is now training his 8-year-old son to carry on his work.

There are about 40,000 hues to choose from, but Rolls will happily match any colour, be it Fluffy the Cat’s left eye or the mistress’ Gucci handbag. For an extra fee, you can name your colour, and it will never appear on another Rolls-Royce.

I got to witness the “marriage” of the drivetrain assembly (turbocharged V12, 8-speed ZF gearbox, driveshaft and rear suspension assembly) to the body of a Wraith coupe, R-R’s newest and fastest car. Apparently we were lucky to observe this most holiest of unions. Our tour guide has only seen it about 20 times in the years she’s been showing people around this fascinating facility.

Prior to “tying the knot” the drivetrain is assembled on a yellow wheeled trolley, although that somewhat undersells this £1.5 million contraption. Two blokes then wheel it under the body suspended from above. The rig hydraulically lifts the oily bits up to meet the immaculately painted coachwork, after which it is secured by 16 bolts. Unlike most weddings that can drag on for hours, this ceremony is done lickety-split; it only takes a couple of minutes.

The wood-work story is mind-boggling. There are 200 craftspeople in the wood shop, and it takes more than a month to create the 48 pieces of wood that go into a Phantom. The veneers are cut from hand-picked logs, be it elm, Australian walnut, tulip, rosewood, mahogany . . . the list goes on. The veneers are “bookended,” which means each half of a panel is a mirror image of the other. Even the door panels are mirrored from side to side.

As these thin veneers can dry out easily, they are kept in a humidor (85 per cent humidity, 25 degrees Celsius) until needed. Rolls keeps exact matches of the wood used in your car for two years in case repairs are needed. And what about mildew, you might ask? There are tiny white beetles, smaller than the head of a pin, that run around and keep the veneers clean. Not on the payroll, apparently.

The sumptuous seats are trimmed in perfect hides from “very large” free-range bulls, raised in the high altitudes of Germany where there are no mosquitoes or barbed-wire fences.

And so it goes. Once off the assembly line, the cars are hand polished for five hours, after which they undergo a 13-kilometre road test, a simulated rough-road bashing for NVH, a 155 mph “run” on a rolling road in the factory, and a 10-minute “monsoon” water test, followed by another eight hours of hand polishing.

This part brings a tear to my eye. Joy? No, more like abject terror. Within an hour I will be piloting a 624-hp twin-turbo 6.75 V12 Wraith on the “wrong” side of the road over hill and hedgerow-lined dale to Amberley Castle, where Rolls-Royce had booked me a room. Do I want to be the dork from the colonies who scratches the Wraith’s perfect flanks on a bloody hedge? Uh, no.

Despite its “shortened” Ghost chassis, the Wraith is longer than a Dodge minivan. It weighs 2360 kg. The massive rear-hinged door swings open to reveal this car’s spectacular Royal Walnut panelling. One has the option of pulling the door shut (how crass) or pressing a button at the base of the A-pillar, which has it gliding closed with regal elegance.

The Wraith does not so much drive as float over the road. The cabin is an ethereal combo of old-world charm, astounding comfort and modern conveniences. It’s so quiet in here you could hear a mouse pass wind.

I get the Wraith to the castle in one piece. I now understand why Rolls-Royce motor cars cost so much money. I need a pint. 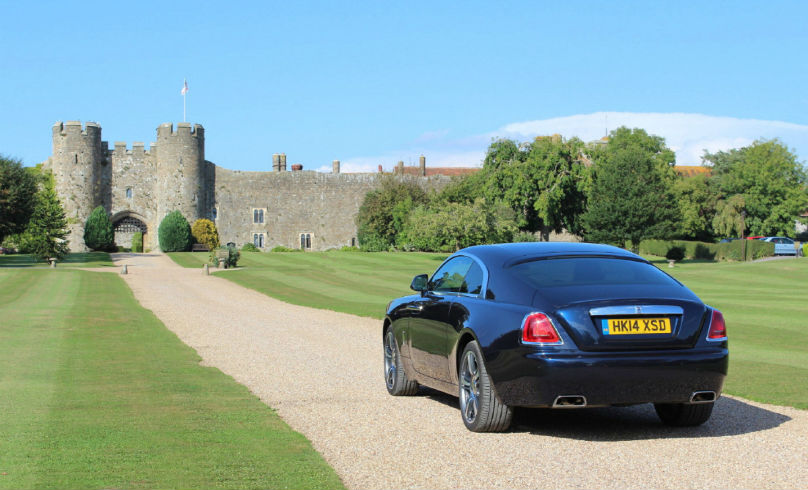 Travel for freelance writer Peter Bleakney was provided by the manufacturer. Email: wheels@thestar.ca