Toronto is spending $250,000 on a pilot project to see if having traffic division police at downtown intersections will improve traffic flow. Montreal’s already doing it, so why not just ask.

The city of Toronto is spending $250,000 on a pilot project to put paid-duty police officers at eight downtown intersections to see if it helps with the flow of automobile and pedestrian traffic.

Now, I always thought – silly me – that this was what police officers in the traffic division were paid to do: manage traffic. But apparently not. The city has to pay full-time police officers overtime pay (or money on top of their regular salaries) to do this job during the test.

I am going to save the city $225,000. I only plan to invoice $25,000 for offering the following advice: ask the city of Montreal how it’s working there. They’ve been doing this sort of thing for years.

RELATED: 10 Things to do in Toronto

I was in Montreal last week for the Grand Prix. I get around, because I love that town, and I’m always fascinated how there are full-time cops on duty during the morning and afternoon rush hours to make sure intersections don’t get clogged up by drivers who try to scoot through before lights turn from yellow to red and that pedestrians are able to cross the street safely.

They are also able – and I’ve talked about this before – to override the traffic signals. They plug into the signal boxes at the intersections and if there is a raft of east-west traffic and only one or two cars going north-south, they can leave the east-west light green for as long as is needed to clear the backlog. As a result, traffic appears to move much better through the downtown core of Montreal during rush hour than it does in Toronto.

And when it comes to pedestrians, if it happens that a car is blocking a crosswalk at an intersection, the police officer will walk out and hold up oncoming traffic so people can walk behind the offending vehicle and move safely across. They also don’t put up with dawdling: if the cop is holding back the cars, the pedestrians had better be hot-footing it or they’ll get a tongue-lashing, as happened to me and several other people from Toronto a week ago Wednesday when we started to stroll across. “Allons-y maintenant!” she barked at us. Then she added: “Move it!”

It’s a mystery to me why we’re spending all that money to find out what somebody else already knows. If John Tory’s interested, the mayor of Montreal is Dennis Codere and I have his phone number. A long-distance call is a lot cheaper than a quarter of a million bucks – minus the 25 grand they’ll owe me for telling them all this.

I keep hearing how wonderful it is to ride a bicycle for transportation in Montreal. It is news to me.

There are no bicycle lanes on any of the major east-west arteries through downtown Montreal except for one, De Maisonneuve Blvd., which is one-way west and has a separate and dedicated bike lane like the one Toronto now has on Queens Quay. Ditto for all of the north-south streets in the downtown. There’s a separate and dedicated north-south lane on University Ave. near McGill — for a few blocks — but that’s it.

Cyclists in Toronto do not have to point to any other North American city as being better served. Toronto is well on the way to becoming — if it’s not already — the transit cycling capital of North America. 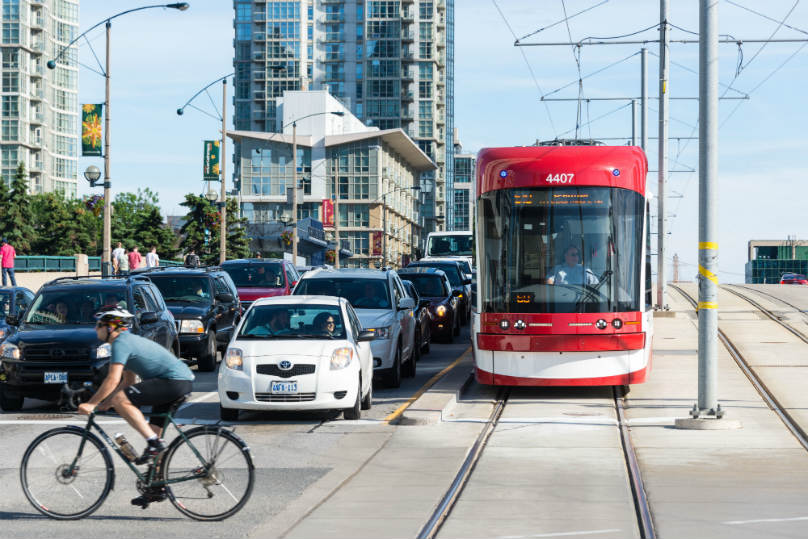