Announcements were made at a press conference at the Metro Toronto Convention Centre, and though both vehicles have been garnering acclaim all year, there were a few gasps of surprise.

The Mazda6 sedan has been crowned 2014 Car of the Year by the Automobile Journalists Association of Canada at the Canadian International Auto Show.

The Jeep Cherokee was named Utility Vehicle of the Year.

It was a close vote for the Mazda, which was awarded 765 points by judges today and so beat the Chevrolet Corvette Stingray by just a single point for the prize. The smaller Mazda 3, which was also in contention, trailed by just two more points.

The Mazda6 is considered the flagship vehicle for the Japanese maker, and it’s a completely new version of its mid-sized sedan. Mazda Canada President Kory Koreeda said it’s been selling about 500 a month in Canada since its introduction last spring.

“There’s room to grow,” he said. “This is going to make a big difference — it’s going to be a big help.”

He said he wasn’t able to predict beforehand which of the two Mazdas might win. While the 6 is loaded with technology and new design, the 3 sells far more vehicles and its lower price might have tipped the vote in its favour.

The Mazda6 originally won its segment as Best Family Car Over $30,000. In fact, its starting price is around $24,495 and it could have been entered in the lower-priced category (won by the Kia Soul), but the auto maker thought there would be a greater chance of success entering a loaded version. The car that was judged for the award retails for $34,995.

The Jeep Cherokee beat the Acura MDX and Kia Sorento to be named as Utility Vehicle of the Year, after originally being named Best New SUV/CUV under $35,000. The version of the Jeep that was judged sells for $33,160. 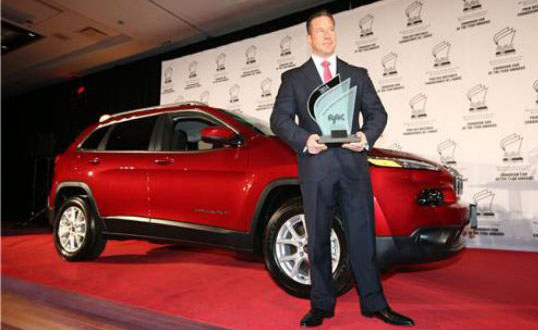 “It’s always a surprise to win this award because the competition is so stiff, but we’re very proud of our Jeep Cherokee,” said Chrysler Canada President Reid Bigland.

The announcements were made at a press conference at the Metro Toronto Convention Centre, and though both vehicles have been garnering acclaim all year, there were a few gasps of surprise.

“Nobody quite knows what to think,” Toronto Star Wheels editor Norris McDonald blogged live from the event. “The Corvette Stingray won North American Car of the Year at Detroit and was considered a shoo-in in Canada.”

The event continues with a media day today and opens to the public Friday, running till February 23.