I don’t really like drivers. I’m perfect, of course. But everybody else? I don’t think so.

Last Thursday was a day when this hit home.

I was at a grocery store and some nitwit in a white pickup truck tried to set a land speed record while going from one side of the parking lot to the other.

I live near a school where there are flashing lights telling drivers to slow down and most don’t. I touched on this a few weeks ago. It bears revisiting.

Finally, I was at a very busy intersection where there are six lanes of traffic and people were turning right on a red while the oncoming traffic had an advance green. The people turning right were technically not breaking the law but were creating a dangerous situation.

A grocery store parking lot is a busy place. People are leaving their vehicles to go into the store or are pushing carts full of food back. Older people aren’t moving too quickly. Parents are trying to keep little children under control while simultaneously putting groceries into their cars. Sometimes kids break away and drivers have to be terribly careful while looking for a parking spot.

The last thing you need is some jerk – driving a white pickup in this case – flooring it when he or she sees there are no spaces available here but one is opening up over there and THERE’S NO TIME TO WASTE.

It’s a miracle there aren’t more mishaps. There are approximately 160,000 automobile accidents each year in Canada and it’s estimated that 20 per cent happen in parking lots. So what to do?

Cameras. I am a big fan of cameras. Bring ‘em on, I say. If the speed limit in a parking lot is 10 km/h and a camera catches you going 15, you get a ticket in the mail. The faster you go, the higher the ticket. Big increments, if you get my drift. I won’t suggest a sum to start, but it should be high enough to get everybody’s attention.

That should slow people down.

Something else not slowing motorists down are school zones. I live near one on a major commuter road where traffic zips right along. There are flashing lights and, for the most part, motorists slow down. They slow down, that is, until they take a quick scan of the two or three places the police sit if they ever do show up to check speeds and once they see the coast is clear, they speed up before clearing the zone.

I live in Mississauga. Peel police (as do most other municipal and provincial forces) have about 100 auxiliary members who volunteer their time to support regular officers. I can’t think of a better use for these people – and if the forces need more, I’m sure the lineup to serve and protect is long – than to have them literally camp out on high-speed roads near these schools and reel in the speeders. It’s a waste of time for real cops to do this and just the thing for volunteers.

Now, one of the things that drives me crazy are the drivers who sit at red lights and, as the cavalry starts charging toward them while turning left on an advance green, decide to turn right. There are many aspects to this scenario.

First, I thought the word “advance” meant that I go first, before you. Second, while you can turn right on a red, you are only supposed to do so when it’s safe and you don’t impede the progress of other vehicles or pedestrians. Third, confusion sets in when, as is the case at some intersections, a green arrow underneath the red directs you to turn right.

I know that when you turn left, advance or otherwise, you are supposed to turn into the correct lane. But this is what got me last Thursday. I was driving west on Eglinton when I came to a stop at Eastgate Parkway. There are two left-turn lanes from Eglington turning into the two-lane-wide Parkway. So two lanes go into two lanes. My lane turned into the curb lane. I’m halfway through my turn when a guy turns right on the red and, in so doing, pulls directly into my path. Yikes.

The next time they update the Highway Traffic Act, I hope they address this. An “advance green” should be just that – an advance. Nobody else moves.

Last column, I talked about a painting I saw of Hwy 401 that I found tranquil and soothing. Thanks to readers, I now know who, what and where. Jack Chambers was the artist, the oil on wood is called “401 towards London No. 1” and can be found at the Art Gallery of Ontario. 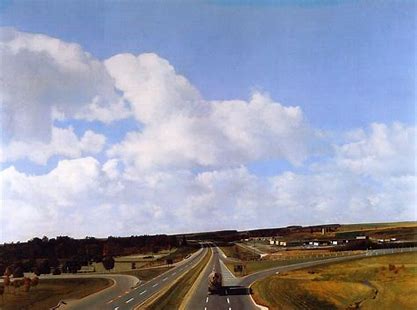