Three for the Road: New BMW 3-Series to Bow in Paris

Alongside a raft of other new models, BMW will be showing off its new 3-Series sedan at Mondial de l’Automobile 2018, next week’s international auto show in Paris.

Listening to complaints from enthusiasts and the world’s motoring press, the mavens from Munich have reportedly been hard at work instilling the new 3-Series with a renewed sense of driver engagement. As BMW’s most successful model range thanks to its myriad of body styles and powertrains, the 3-Series is a very important car for the company.

Close inspection of the teaser shot shown here confirms the company’s trademark twin-kidney grille resting under a silken sheet, along with items like door handle lights and a puddle lamp. A trio of different teaser images posted to BMW’s Twitter account this morning confirm the car’s signature Hofmeister Kink and the existence of a performance model with natty brakes. The dashing man in the third Twitter picture is also shown not holding on to the wheel, suggesting some form of advanced driver assistance may be in the cards. A challenger to Cadillac’s Super Cruise and Tesla’s Autopilot, maybe? 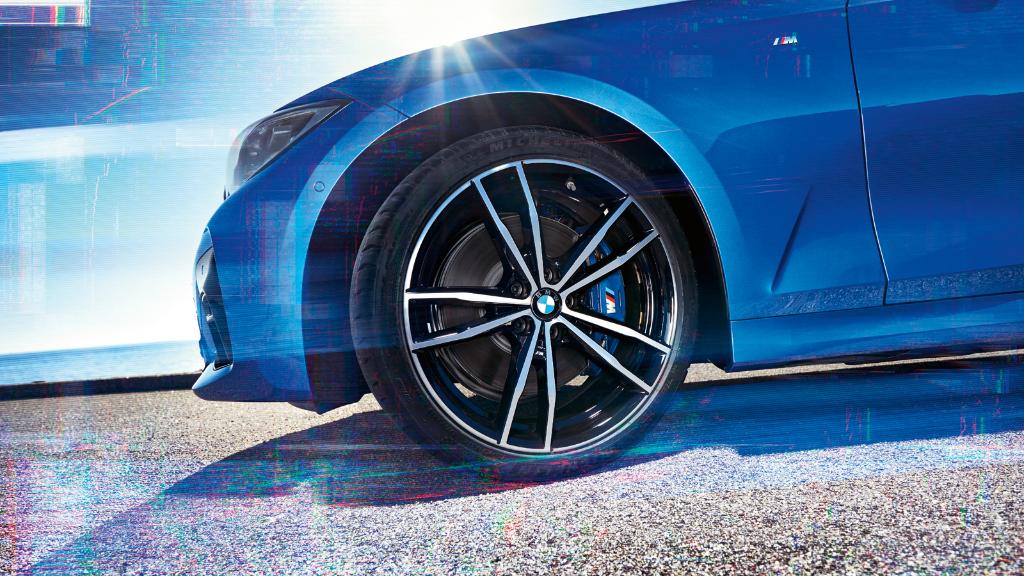 BMW has already confirmed that final suspension and chassis tuning for this latest 3-Series took place at the fabled Nürburgring Nordschleife. They’ve also let slip a few juicy details about the new car, including a center of gravity 10mm lower than the predecessor model, a perfect 50:50 weight distribution, and a total weight savings up to 55 kilograms depending on trim.

We also know a bit about that Nürburgring-tuned suspension. BMW says this new 3 will feature the first-ever progressive dampers to be fitted on a Bimmer. The company says they will function continuously and progressively in relation to suspension travel and are “a standard feature of the suspension technology in the new BMW 3 Series Sedan.” This is very good news.

The Germans also point out that, in a specific set-up, these dampers form part of a special M Sport suspension. This will drop the car about half an inch and yield 20% higher damping than the standard suspension. The new M Sport suspension will be offered solely in combination with something BMW calls Variable Sports Steering. We look forward to sampling this new tech.

In addition to the Nürburgring, the company has also been testing the car in places ranging from the oppressing heat of Death Valley to the frigid environs of northern Sweden.

The stand in Paris will also show off copies of the new BMW Z4 and new BMW 8 Series Coupe, in addition to the fourth-generation BMW X5 and new BMW M5 Competition. The latter is a tasty large sedan putting out 617 horsepower, building on the performance creds of an already-omnipotent M5.

Fans of the brand should prepare themselves a cup of Schwarzkaffee if they want to watch the live reveal. The new 3er will be uncovered at 9:00 am Central European Time on October 2nd, or about 3:00 am Eastern here in Canada.