The Present — and the Future — of Infiniti

TRUTH OR CONSEQUENCES, N.M.—I’ll tell you about that dateline in a moment. But first …

When I flew here from Phoenix a few weeks ago to cover Infiniti’s 30th anniversary, the scene seemed to be right out of a great 1960s political thriller called “Seven Days in May” that starred Burt Lancaster, Ava Gardner and Kirk Douglas. It’s about the U.S. military joint chiefs of staff planning to overthrow the government and one of the subplots is about a secret military base in the American Southwest. In the movie, it’s in the middle of the desert, and here I was, on a private jet, landing not only in the middle of the desert, but also in the middle of nowhere.

They could have filmed that part of the movie here, I thought, “here” being the Jornada del Muerto desert basin of this intriguing state that sits between Arizona and Texas on the border with Mexico. The closest community of any kind was Truth or Consequences, and therein lies another tale.

Originally called “Hot Springs,” the name of the town was changed in 1950 as the result of a challenge thrown out by Ralph Edwards, the host of an NBC Radio program called — you guessed it — Truth or Consequences. Edwards said the quiz show would go to air on its 10th anniversary from the first town to rename itself after the program. Hot Springs won and Edwards carried out his promise. Truth or Consequences never switched back and bears that name to this very day.

And although this part of the New Mexican desert is isolated, that doesn’t mean where we were was desolate. The Infiniti 30th was held at Spaceport America, a 7,300-hectare private commercial airport in the desert that’s used by Richard Branson’s Virgin Galactic space flight company and others to take people like you and me for a ride into, or near, orbit. It will cost you about US$250,000 for a seat on a spacecraft that will take you up, allow you to experience weightlessness, and then descend to land on the 3,700-metre runway, promoted as being the longest in the world.

It was on — or near — that runway where we got to drive some of Infiniti’s latest offerings. In a tent near the Spaceport America hangar, we were introduced to something special, the futuristic Infiniti QX55 compact crossover (although it looks more like a sports car) that’s just around the corner and is the first of five new global vehicles (three of them electric) that will be manufactured and on sale in the next three years. This all followed by a day of being taken to Scottsdale, Ariz., where Infiniti executives had reviewed the history of Nissan’s luxury brand and talked about the company’s commitment to design, customer service and technology. 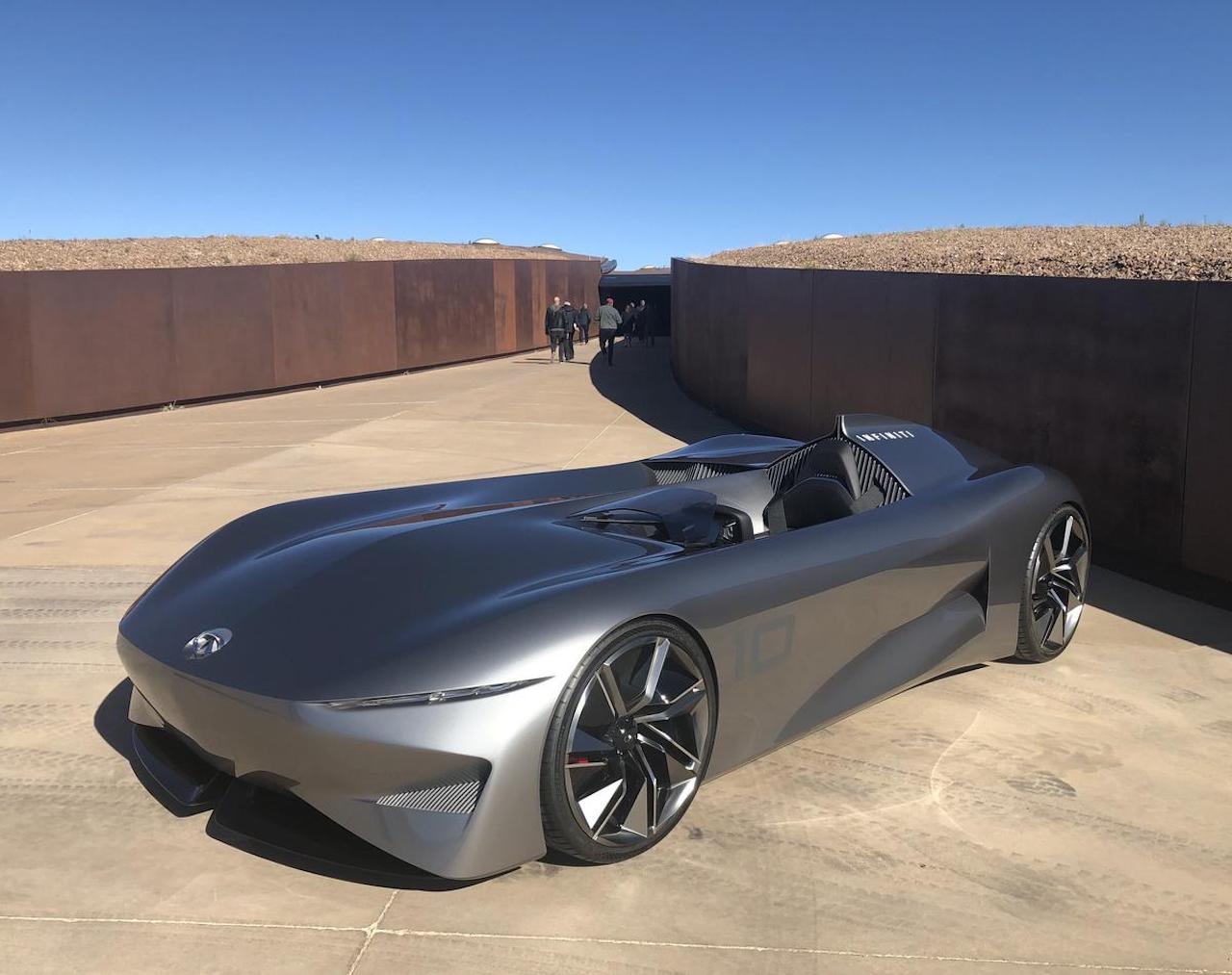 Concepts aside, and they really are fun to hear about and sometimes to see, the real reason any automobile manufacturer invites the world’s automotive media to events like the one in New Mexico is to show and tell what’s available, or will soon be available, for them to sell and consumers to buy.

Take the 2020 Infiniti Q50 sports sedan, for example. If it’s anything like the 2014 Q50, which was “refined” by four-time Sebastian Vettel when he raced for Red Bull in Formula One and Infiniti had a sponsorship deal with the company, they’ll have a winner on their hands. I was lucky enough to be a passenger when Vettel took the Q50 around Canadian Tire Motorsport Park on a flying lap, and I emerged from the experience a big fan of the car and an even bigger fan of the driver.

Of course, the Q50 has evolved somewhat since then, and the 2020 version, which is available now, features Infiniti’s advanced 3.0-litre V6 engine technology, which puts out 300 and 400 horsepower. The Q50 also has a next-generation InTouch system with HD duel-display eight-inch upper and seven-inch lower touch screens. Apple CarPlay and Android Auto, including Siri and Google Voice, are also standard.

A new trim — there are six available, in total — is the Signature Edition ProASSIST, which has a black spoiler, black double-arch grille with an illuminated emblem, exterior ground lighting and safety features like blind-spot warning, backup collision intervention and around-view monitor with moving-object detection. All trims have all-wheel drive, heated steering wheel and heated driver/front passenger seats.

The 2020 QX50 is also available now, and its claim to fame is that it was voted best mid-size premium utility vehicle for 2019 by the Automobile Journalists Association of Canada (AJAC). As well, it received a five-star rating from the U.S. National Highway Traffic Safety Administration. With a focus on safety, security and driver aids, a number of previously optional offerings are now standard, including forward emergency braking with pedestrian detection, forward collision warning, rear automatic braking, high-beam assist and rear parking sensors. 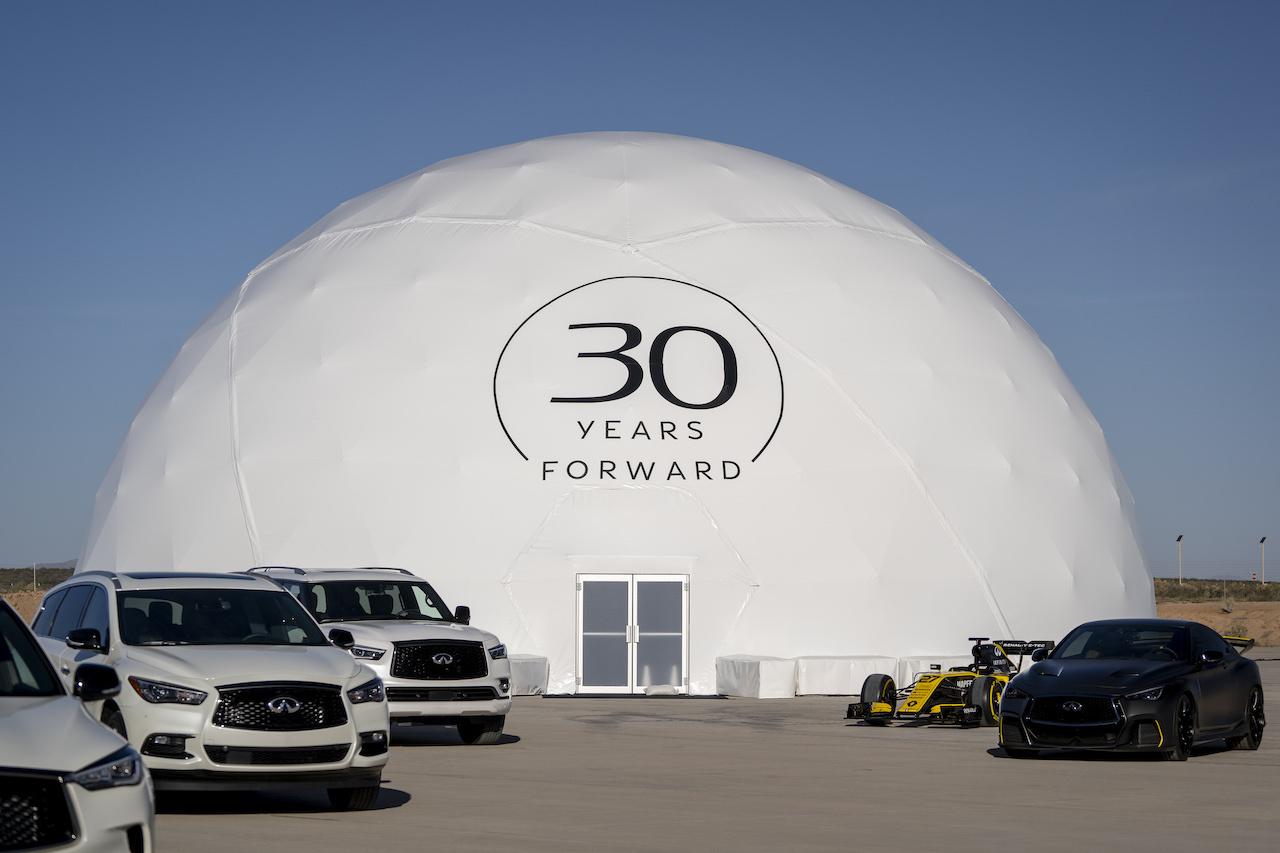 Offered in five trims, the QX50’s 2.0-litre VC-Turbo engine adjusts its compression ratio so that it can combine the power of a turbo gasoline engine with the torque and efficiency of a four-cylinder diesel.

Now, the 2020 Q60 sports coup won’t be available till next March, but it will be offered in five trims, including the 400-hp Red Sport I-Line and the Red Sport I-Line ProACTIVE. This performance coupe has a new IT system with Apple CarPlay and Android Auto. New safety and security features like front-and-rear parking sensors, around-view monitor with moving object detection, blind-spot warning and backup collision intervention will all be standard.

The QX60 premium crossover, on the other hand, is in showrooms now, which is to be expected since the luxury crossover has been the brand’s top-selling model in Canada for six consecutive years. It’s a three-row, seven-passenger automobile that boasts a number of family friendly features including a feature that sounds somewhat complicated, but is meant, simply, to make sure the driver doesn’t get out of the vehicle and leave a baby or a toddler in a car seat in the back.

Not far behind — it’ll be available in a few weeks in December — is the 2020 Infiniti QX80, and this is my kind of vehicle: a big car in the style of the Cadillac Escalade and the Lincoln Navigator — two of my other favourites. 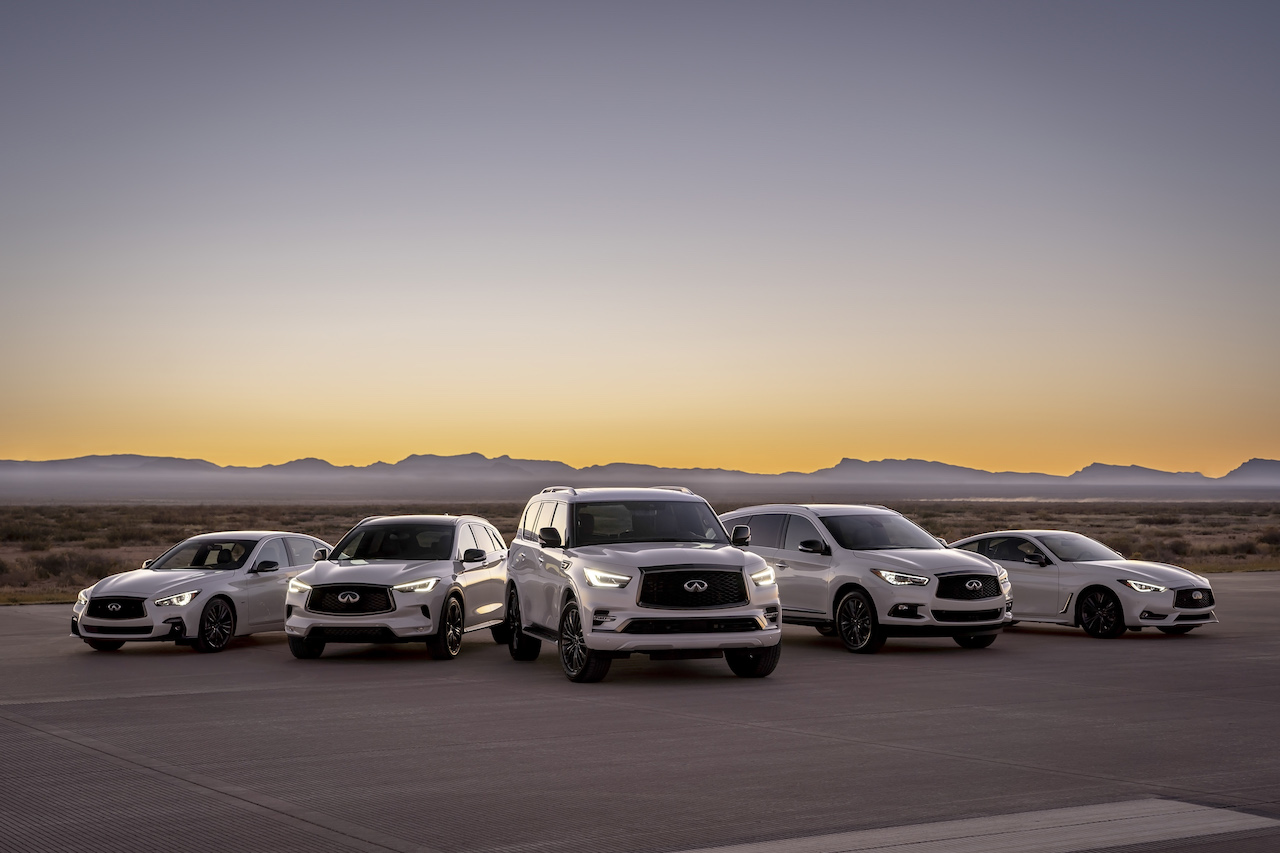 New for 2020 are the Infiniti InTouch infotainment system with dual high-resolution touch screens, a new IT system technology, a standard 17-speaker Bose Performance Series audio system, rear-door alert (that won’t let you forget the baby), lane-departure warning and so-on. There are four models and 22-inch wheels are a feature on all, as well as roof rails and crossbars.

Now, as well as hearing and learning about these cars (and a couple of others), we got to test them out on a series of courses. For instance, we got to drive around an off-road course aboard the QX80. The big SUV handled the hills and dales with ease. The Q60 was turned loose on a dirt course, and you would think it capable of being entered in the World Rally Championship.

I particularly liked driving backwards around and through a circuit without hitting any of the orange cones. I got about a third of the way through the first time and stopped. I realized I hadn’t taken the time to get a good look at the course, which I then did. Satisfied I knew which way was which, I put the thing into reverse and zipped right through backwards (love the precise steering) and didn’t so much as touch a cone. Others were not so lucky — or thorough.

You know, you go to these presentations and it can be surprising how many interesting people you run into. One in particular this time was Taisuke Nakamura, who took over from Karim Habib, the Canadian who was Infiniti’s most recent global chief of design. Nakamura is the guy who will guide Infiniti’s design teams as they move the marque toward electrification.

And when I pulled up to take a car through the dynamics course to test suspension capabilities, I asked the woman in charge to say her name into my recorder (so I could be sure of spelling it correctly later) before she explained what we would be doing on the course and how we should be doing it. “Shea Holbrook,” she said. 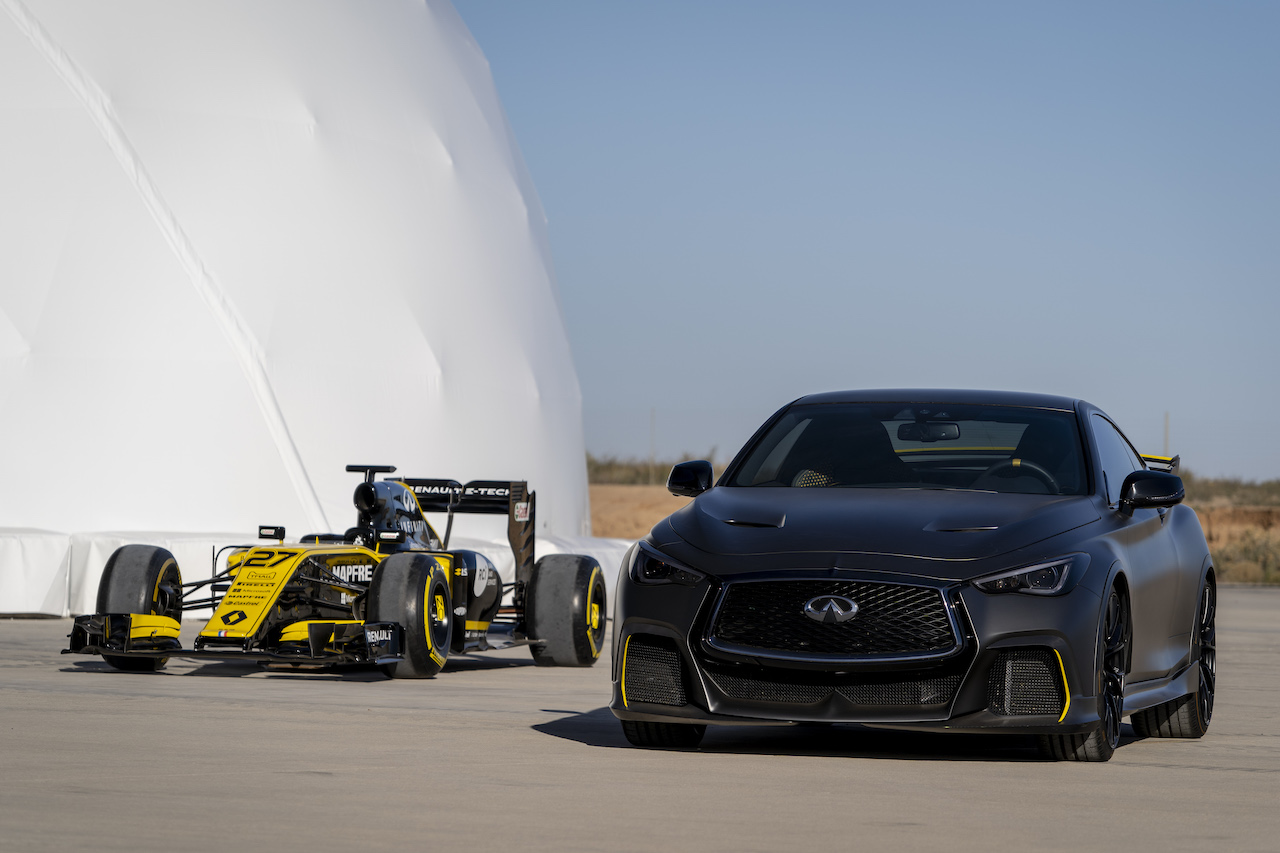 Now, I’m a bit of a groupie when it comes to certain athletes. I knew this woman’s name.

“Are you the Shea Holbrook who’s a professional racing driver and drove in the first year of the European W Series in which a Canadian, Megan Gilkes of Richmond Hill, also raced?” I asked. “One and the same,” she replied, and then told me to get going because I was holding other people up.

Holbrook, a former competitive water skier and a pilot, raced in the Pirelli World Challenge Series and won the Touring Car race that was part of the annual Grand Prix of Long Beach weekend, one of only four women to ever win at that circuit. She finished in the top ten in the Pirelli series in 2017. Also a jet dragster driver, she finished 18th in the W Series; Gilkes was 20th. I asked if she — and Megan — had enjoyed the series.

“It was a lot of fun,” she said, “just like the fun you’re having driving these Infinities.”

She was right about that.

Norris McDonald is a former Star editor who is a current freelance columnist. 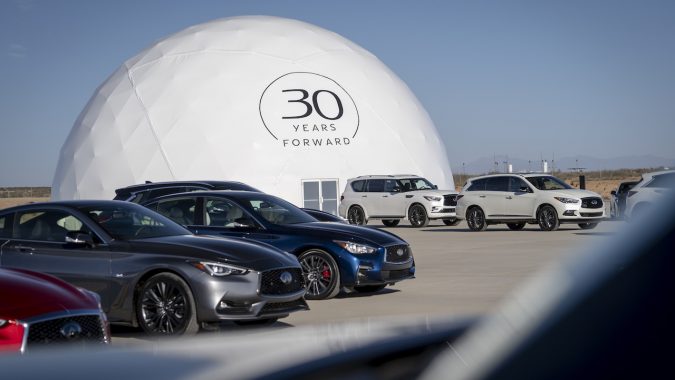 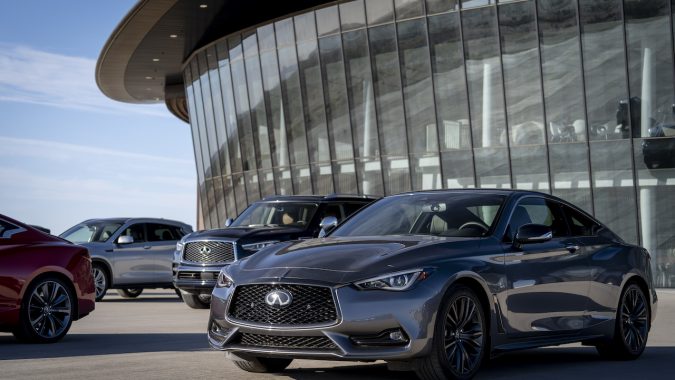