This is my second column about people who know more about racing than I do and the six degrees of separation that go with it.

In my life, I’ve had seven favourite racing drivers: Eddie Sachs, Jimmy Clark, Don Branson, Ronnie Duman, Jochen Rindt, Peter Revson and Gilles Villeneuve. All were killed in race cars. I lost my last favourite when Gilles died in May 1982. Ever since, I’ve cheered for everybody out there.

Back in late June, 1965, when the quarter-mile CNE Speedway was at its peak, promoter Ernie Lieberman brought in the U.S. Auto Club 110 Offy division (better known as the USAC Midgets) for a special show. All the IndyCar stars of the day ran the midgets back then and because it was a points race, everybody towed in.

It was the year that Mario Andretti finished third and was named Rooke of the Year in the Indianapolis 500.  Toronto had a large post-war Italian population and although Andretti had started to branch out to sports cars and hadn’t planned on entering, Lieberman insisted that Andretti be there. 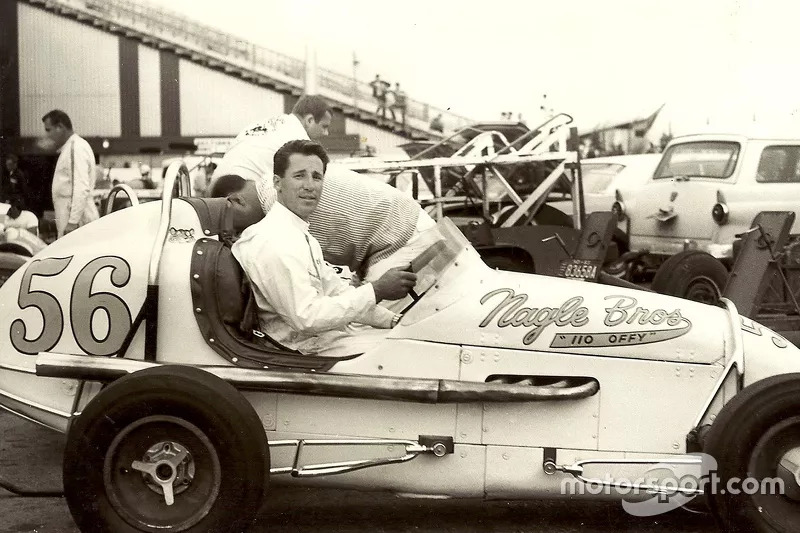 As luck would have it, the future motorsports legend didn’t qualify for the feature and Liberman had to pay to have him added to the field as a “promoter’s option.”

My wife and I had seats in the old Grandstand near the fourth turn. I had my eye on future IndyCar star Jimmy Carruthers and his great on-track rival Bob “Two Gun” Tattersall. Those two took no prisoners. I was salivating at the prospect of a great race.

As the 100-lap feature got underway, I noticed a woman two rows in front of us who kept jumping up and down every time a particular car would pass another. She had two children with her, a young girl who looked like every young daughter you’ve ever seen and a younger-looking boy who was wearing a pair of racing-type coveralls.

By the time the race ended, I’d figured out – as had most of the crowd around us – that the woman and the two little ones with her were the family of the race winner, a guy named Ronnie Duman. The photo that was included in part one of this reminiscence was taken at this event. Duman is seen shaking hands with promoter Lieberman. Meanwhile, the young girl and her blond mother are at the edge of the left side of the photo and the young son is crawling around inside the car. I missed being in this photo by a smidgen; I was close enough to hear his wife ask somebody for a cigarette. “I know I shouldn’t smoke,” she said, “but I’m so excited.”

Duman, an orphan, had tried out for the Detroit Lions but he wasn’t good enough for the NFL. He was, however, a natural at the next sport he tried, auto racing.  He was badly burned during the 1964 Indy 500 crash that killed Sachs and California sports car pilot Davey MacDonald. Parnelli Jones was burned when his car caught fire during a pit stop and the nearby Methodist Hospital put him in a room with Duman, who’d arrived earlier. A friend smuggled in a six-pack of Budweiser and the two injured racing drivers got feeling pretty good as they listened to the rest of the race on the radio. Duman was on the comeback trail when he raced at the CNE in ’65.

When I went to Indy for the first time in 1967 – I wasn’t assigned to cover the 500 till 1969 – I was feeling pretty good myself the night before the race and decided to phone Duman and wish him luck. He lived on Georgetown Road, which runs beside the Speedway, and his name was in the phone book.

“Mr. Duman,” I said, before telling him who I was. “I saw you win a race in Toronto a couple of years ago and I just wanted to wish you luck in the big race tomorrow.” He laughed, thanked me for calling, and then said, “If you’d like to drop by for a beer, feel free. We’re having a cookout over here.” I thanked him but said our hotel was too far away. Now I wish I’d gone. A year later, he’d score his best finish at Indy – sixth – and then a week later, in a race at Milwaukee, he was gone.

I took a picture of Duman on the main straight that year as the cars were being lined up for the start. When the Molson Indys started in Toronto in the mid 1980s, I took a copy and looked up that young boy who’d been playing in his dad’s car. His name is Rick Duman and when I found him, he was working as a mechanic for CART star Tony Bettenhausen Jr. He thanked me for it, said his mom had since remarried and maybe the paper I was working for would like to sponsor Bettenhausen and his team the next time they came to race in Toronto.

I was talking to my friend Pete Turford, one of the two people I wrote about last week (John Strothard is the other and I will write a column about him one of these days), and was telling him about all this.

“Norris,” said Pete, “I spent the summer in Brownsburg, Ind., and one day a few weeks ago I was in the shop of a young guy named Rick Duman. He’s off the racing road now and in business restoring old Indy cars. Small world, eh?”

It’s even smaller. There’s a guy in Mexico, N.Y., named Steve Miller. I know him too. He’s restored most of the Indy roadsters that a guy named A.J. Watson built when his cars and those constructed by Jud Phillips and Frank Kurtis and a few others were driven by guys like Duman and always seemed to be in Victory Lane.

Next May, I’ll do a series of articles on Miller and the Watson cars he’s restored and Rick Duman, who’s been restoring cars that have raced at Indy since. Maybe one or two of the cars his dad drove will be among them.

As I said in a teaser a week ago, the six degrees of separation is real. Ronnie Duman, A.J. Watson, Steve Miller, Pete Turford, Duman’s son Rick, and me. Never fails.