The Aston Martin V12 Speedster is an Aircraft-Inspired Stunner

The company is making just 88 of the cars, with orders open now.

Aston Martin is going topless with its latest V12-powered creation. The Speedster is a strictly-two seat sports car that the company managed to bring from idea to display in a little over a year. It also shows off a new collaboration between the automaker’s Q customization service and Boeing. Yes, that Boeing.

It’s called the V12 Speedster, and it’s a stunner with a face that’s typical Aston Martin. And there’s no need for a windshield or anything to keep the rain out. Which is strange since it is built in a place that’s not exactly known for being dry.

Underneath, the aluminum chassis borrows bits from the DBS Superleggera as well as the Vantage, and Aston calls it a unique platform. Bonded to that chassis is a bespoke body made almost completely from carbon fibre. “With the V12 Speedster we do go back a step and look into our past for inspiration. Since the DB11 launch, everything has been focused and very forward looking. Here though, we find a different tempo,” said Aston Director of Design, Miles Nurnberger. He calls out details like bits of the DB3S in the midsection as well as the DBR1 and CC100 Speedster concept cues. 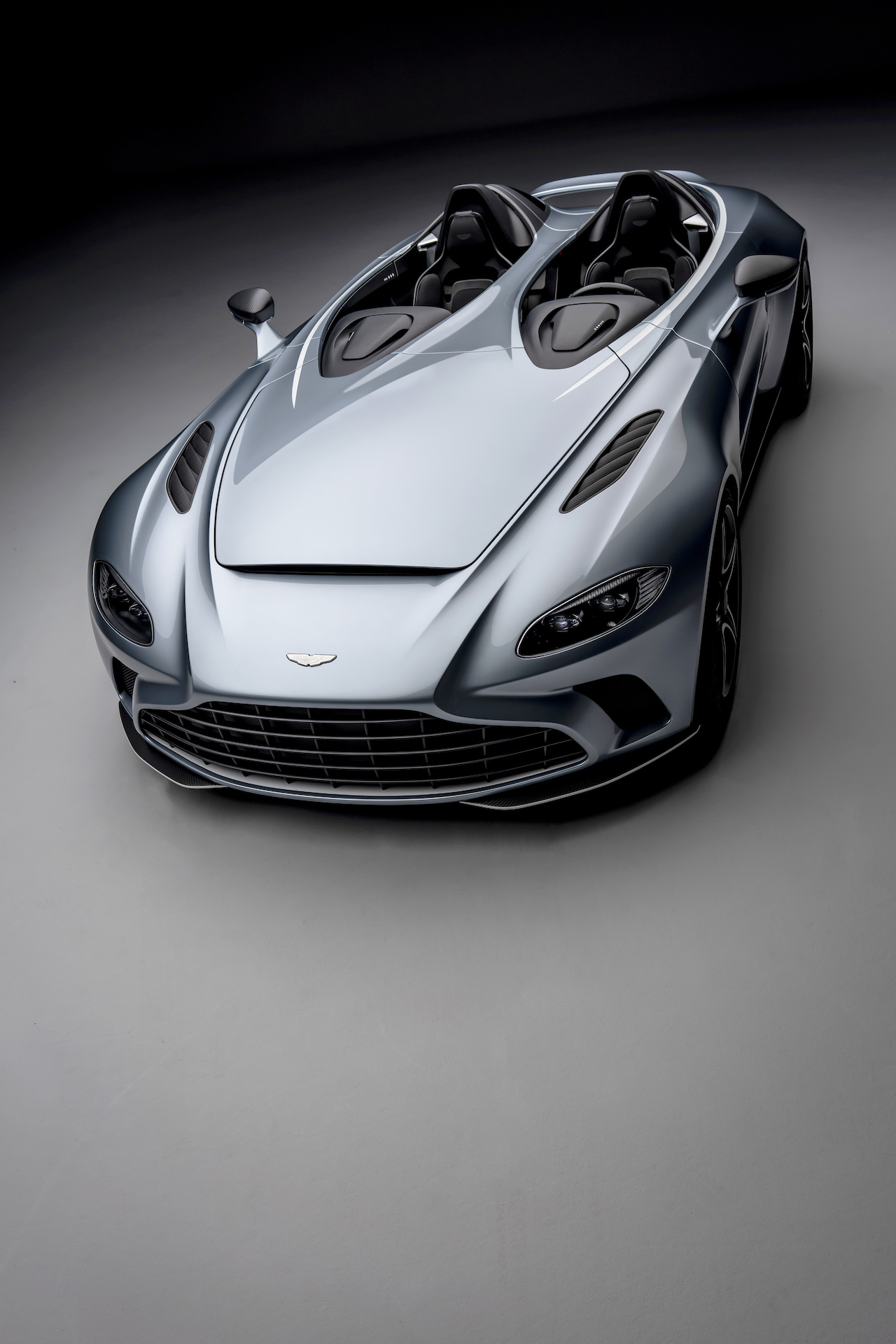 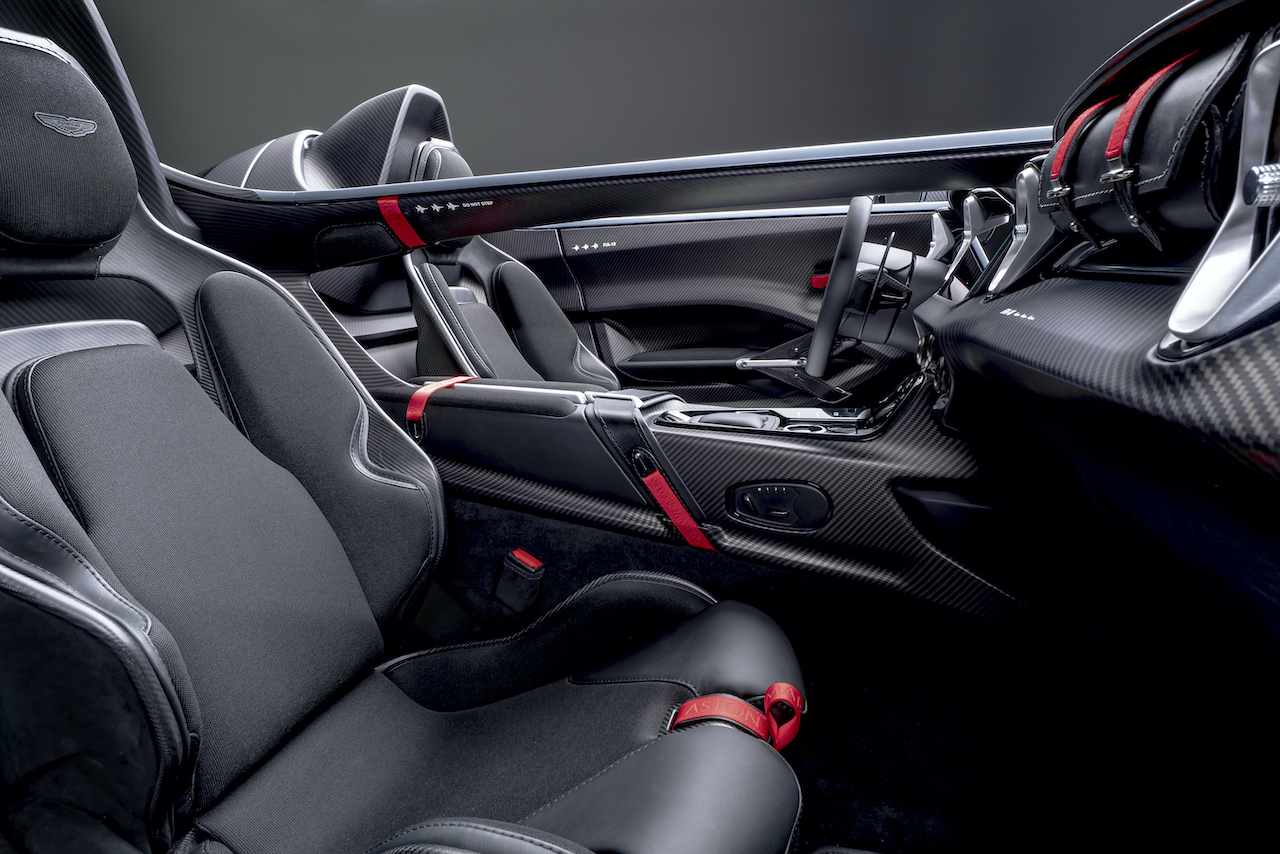 Nurnberger says that Aston hasn’t done a hood vent in a while, but that this car needs it in order to fit the 5.2L twin-turbo V12 and its 700 hp. Power is sent to the rear through an eight-speed automatic and it can hit 100 km/h in 3.5 seconds. The V12 uses a new stainless exhaust that dumps into the rear diffuser. Aston says that this gives it an even more visceral sound to accompany the wind and engagement of the missing front glass. “For raw, driving thrills the V12 Speedster is unparalleled, the fully open element of the car adding a new dimension to the experience,” said Chief Engineer Matt Becker.

Look in the divided cabin and you’ll notice plenty of military aircraft-inspired touches. Like the red straps and actual graphics of the F/A-18 fighter. It’s a new collaboration between Boeing and Q by Aston Martin that sees the car finished in Skyfall Silver with dark chrome details, machined aluminum, black textile, and that removable leather bag that takes the place of a glovebox. The F/A-18 graphics, and especially the Do Not Step text is a bit odd, but it’s Aston so we’ll go with it.

The company is making just 88 of the cars, with orders open now. Deliveries start the beginning of next year with pricing from U.S. $950,000. 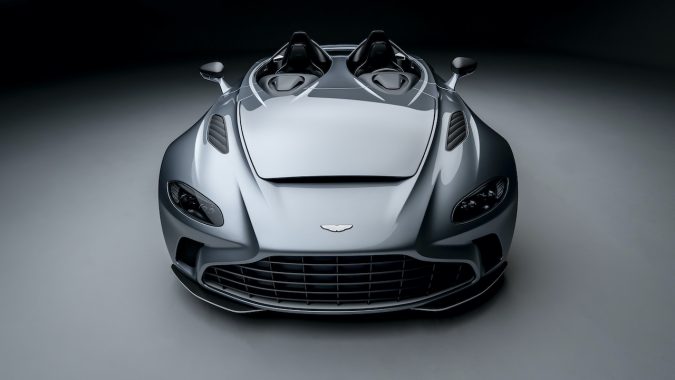 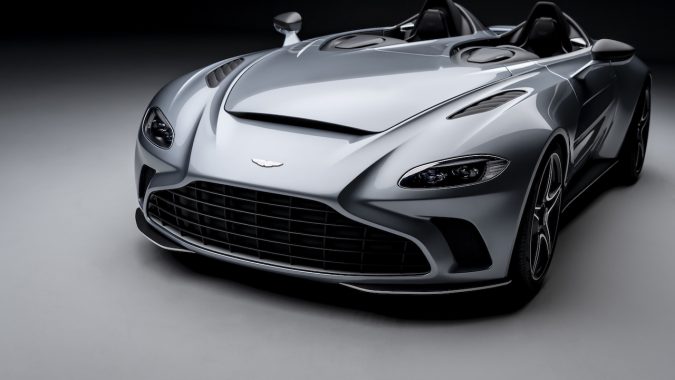 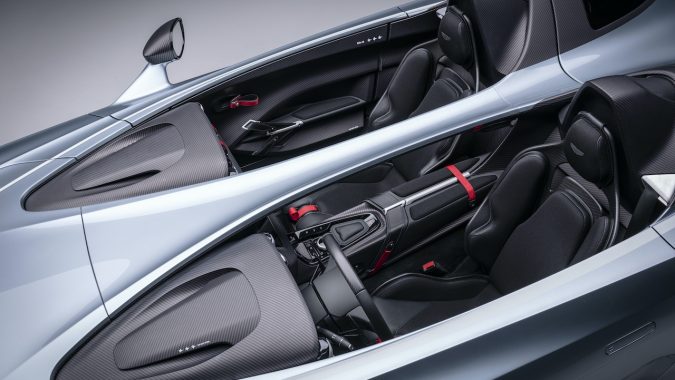 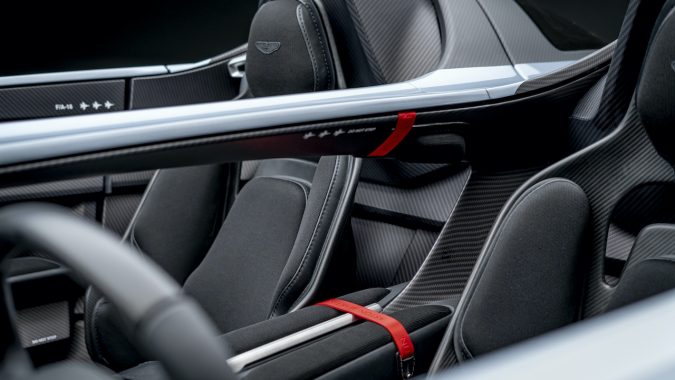 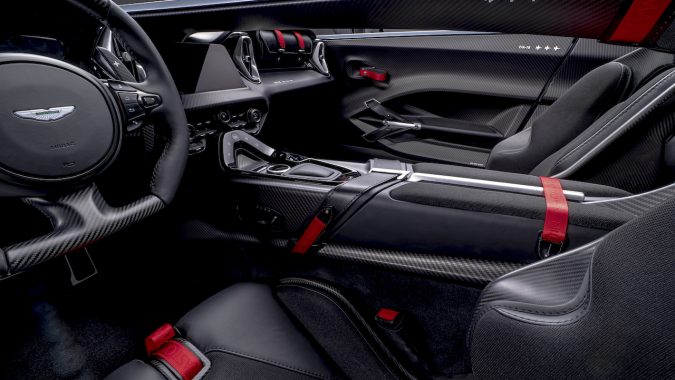 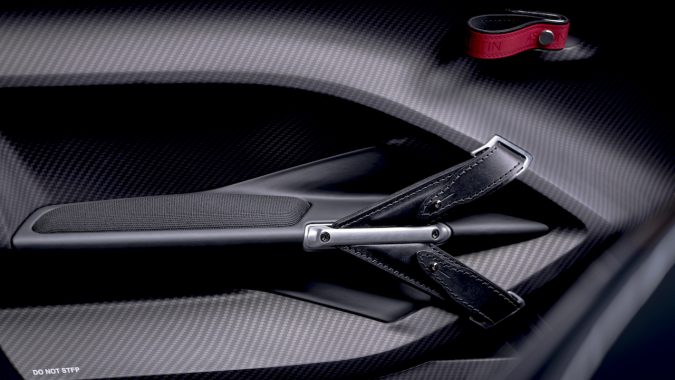 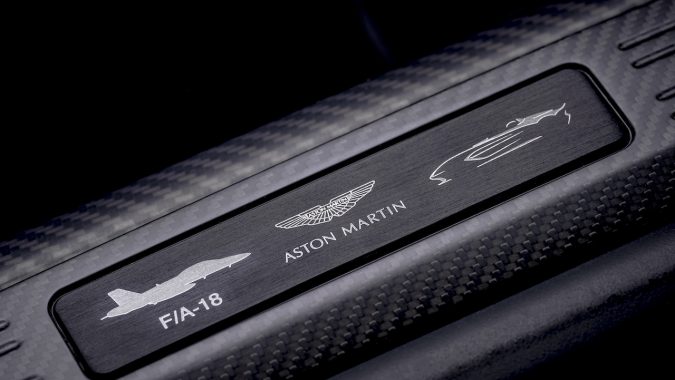 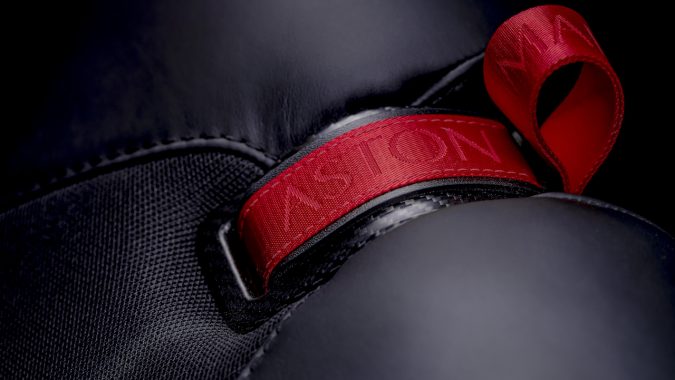 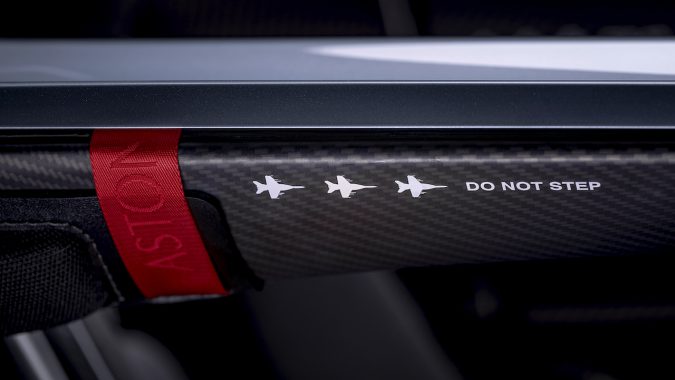 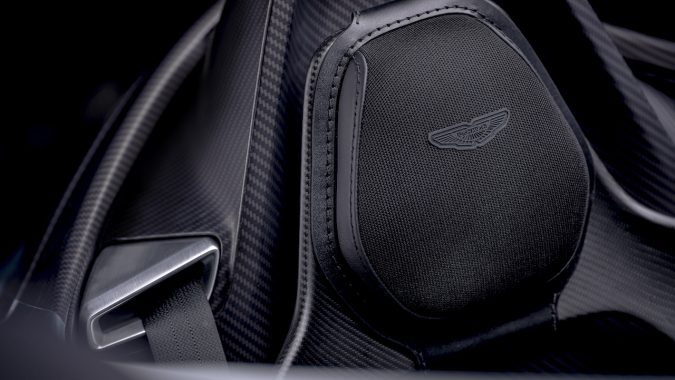 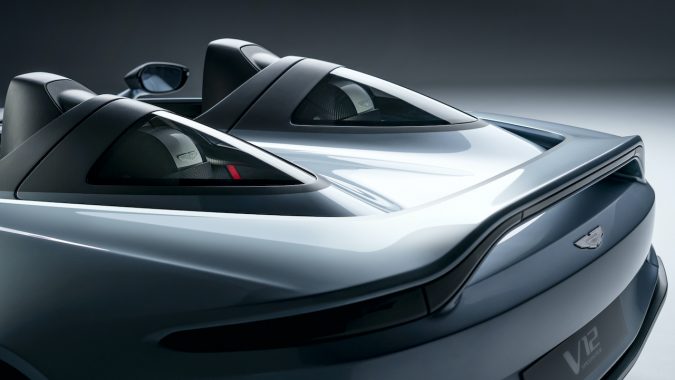 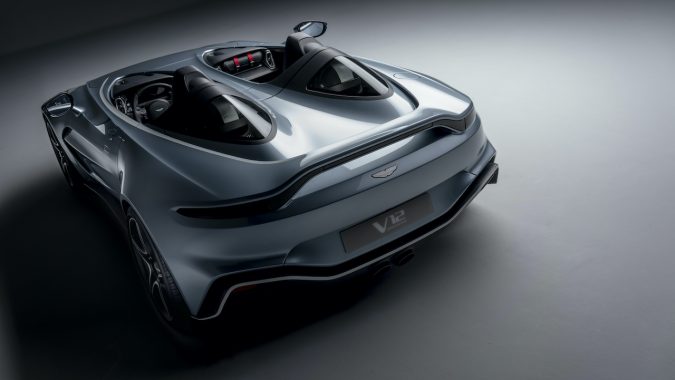 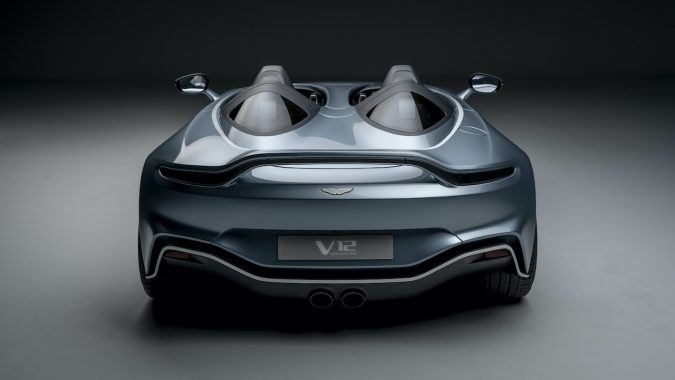