But the 2.0T driveline option is gone for good.

Join the Conversation (0)
With the number of sedans on the market seeming to shrink by the month, it would have been easy for Honda to kill its big sedan too. Or to give the model a slight freshening at the end of its cycle, which is coming up fast. Instead, Honda has gone all-in on the family four-door. With a model that is longer and sleeker and will offer the brand's latest hybrid systems.

The 2023 Honda Accord is 89 mm longer than the model it replaces, though they both ride on the same wheelbase. Some of that extra length has gone directly to styling, with a longer hood helping give the car what Honda calls a more premium silhouette. Passenger space in the cabin is still up, if only slightly. Rear-seat legroom climbs noticeably, with an extra 11 mm making it the best-in-class for long-legged passengers. 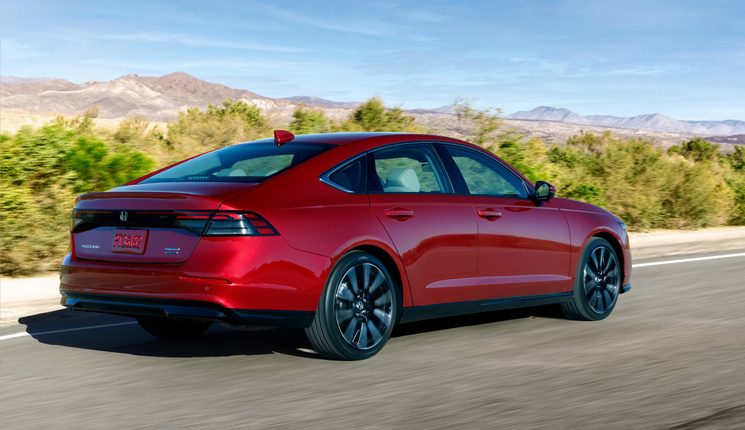 As a whole, the design is sleeker and sharper than the last-generation Accord. It's transformed the car from a bit of an oddball into a sedan that might be the best-looking in its segment. Under the skin, Honda has made the car stiffer with new supports and front brace bars. The moves promise to improve ride comfort as well as handling, and Honda has tuned the suspension and steering the enhance the fun quotient.

We'll miss the powerful 2.0L turbo Honda offered in the last-gen Accord. Instead of the baby Civic Type R engine and its 252 hp, we'll get a new hybrid system that uses Honda's latest two-motor system to make 204 hp and 247 lb-ft of torque. Honda says the system is more responsive and more refined at highway speeds. Honda is also calling it the "most powerful Accord hybrid model ever," but we remember the 255 hp 3.0L V6 with IMA that Honda offered briefly in the mid-2000s. The company is probably referring to torque where the new one does get a slight edge.

While Sport and Touring trims will be all hybrid all the time, the EX will still get a 1.5L turbo-four. A version of the engine Honda puts in most of its smaller vehicles, the 192 hp engine gets a bit more refinement and improved emissions performance. The CVT has been tweaked to reduce noise and add "significant drivability and performance improvements." 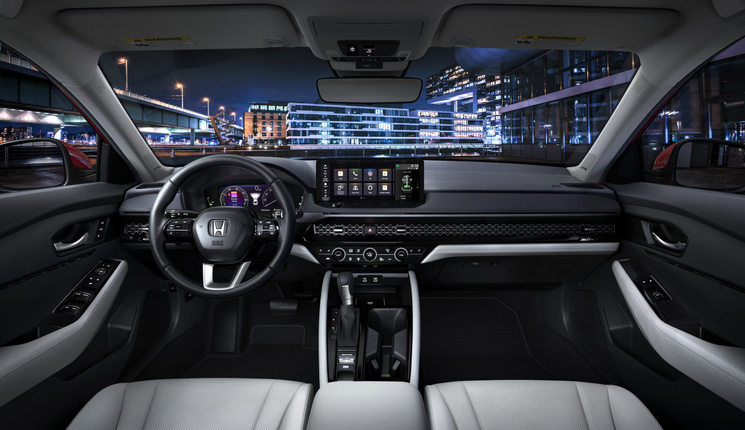 Honda touts its use of premium materials in the cabin of the latest Accord, saying that they were chosen to help add style and to feel more premium. Yes, it looks a lot like the interior of the latest Civic (and the Pilot, HR-V, and CR-V), but that's a great cabin to copy.

All 2023 Accords get a 10.2-inch digital dash cluster display, with a power flow meter for the hybrids. EX models get a new 7.0-inch screen with Apple CarPlay and Android Auto. Sport and Touring models get a 12.3-inch display that is Honda's biggest ever. Cars with the big screen get wireless CarPlay and Auto and a new nav system with easier-to-use menus. All Accords get over-the-air update capability, letting Honda tweak nearly every computer module in the vehicle down the road.

Accord gets Honda's new airbag tech designed to help reduce the risk of head trauma in angled front crashes. It also adds standard knee airbags and rear passenger side-impact airbags. Honda Sensing, the brand's driver assistance suite adds a new camera with a wider view and a new radar sensor with the same. This gives the system better performance and expands the range at which it can detect potential collisions. Stolen vehicle tracking, remote immobilization, and a find my car function are new for 2023.

Honda didn't say when the 2023 Accord would go on sale, but we're expecting it early next year. We'll get pricing just before it hits dealers, but expect an increase from the current EX-L at $36,570 and a much higher entry point now that the SE and Sport trims are gone.