The all-electric i7 is the showstopper here.

Join the Conversation (0)
The last time I was in New York for a BMW event was in 2015 and, just like my trip to Manhattan last week, it involved the flagship 7 Series sedan.

Seven years later I return, but there’s one big difference: seat time isn’t on the menu. I’m just here to observe and report back. Still, that didn’t stop the memories of lapping the then all-new G11 / G12 at Monticello Raceway from rushing back as I sat in a room packed full of international media awaiting the world debut of the 2023 7 Series (G70 / G71) at the Chelsea Industrial in Midtown.

True to how much has changed since 2015, the real star of the show isn’t the gas-powered 760i xDrive; but the pure-electric i7 xDrive60. That isn’t to speak ill of the 760i, which is newsworthy too, but I’m going to focus primarily on the i7 because it’s the headliner. 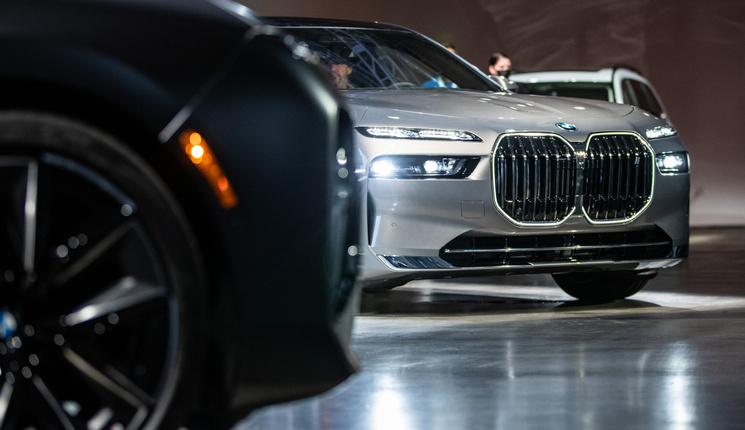 BMW has been gradually moving away from small, rounded kidney grilles and twin circular headlights for years, and it feels like a clean break has been reached with the new 7 Series. Their kidney grilles are large and geometric while the LED headlight elements are small. The latter are now separated, with the main low and high beams located below and the upper elements serving as daytime running lights. Adaptive LEDs are standard on both 7 Series models, and Swarovski crystal detailing is available as an option for the upper elements.

Elsewhere, the exterior design remains muscular, with a clean aesthetic and a wide and commanding stance. These cars are dripping with advanced technology and that feeling is reflected in their external looks, even for rather mundane items such as door handles which are now flush, as they are on the iX EV. The slim rear LEDs in the shape of facing Ls are also reminiscent of other new BMWs.

Dimensionally, the new 7 Series cars are bigger than the outgoing models they replace. They are 124 mm longer, 48 mm wider, 65 mm taller and the wheelbase has grown by 5 mm.


Mechanically, the i7 is powered by two electric motors that are free of rare earth materials. BMW says they provide nearly silent propulsion, due in part to their acoustics and the way they are mounted, which BMW says is model-specific. In terms of power breakdown, the motor driving the rear wheels produces 308 horsepower, while the one up front produces 255. Meanwhile, the battery pack is a high-voltage 101.7-kWh lithium-ion unit. Total output is rated at 536 horsepower and 549 lb-ft of torque, which makes the i7 quite quick for a big sedan. It can cover zero-100 km/h in 4.7 seconds with an electronically governed top speed of 240 km/h.

As for its other EV characteristics, the i7 offers adaptive energy recovery (or recuperation) during deceleration and braking. In driving position D, recuperation adjusts automatically based on data collected from the navigation system and sensors in the car’s driver assistance systems. Low, medium, and high energy recuperation settings are also available and can be selected through the iDrive menu. One-pedal “feeling” as BMW describes it, is available in driving position B, which delivers the highest level of recuperation. The i7 can also “freewheel”, or coast, if the driver takes their foot off the accelerator. In this instance, no energy is flowing to the electric motors and thus no battery power is consumed. 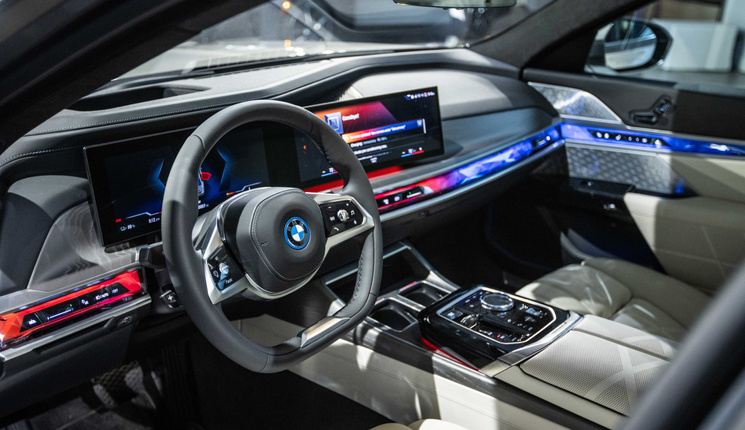 In terms of charging, the i7 uses modified software found in the i4 and iX that has been enhanced for the big sedan. The main difference here is that instead of a “stepped” curve where the charge level drops significantly as the battery gets closer to full, the i7 has what BMW calls a more “rounded” charging curve, with a smoother drop-off near the end and shorter charge times.

As for charging speed, the Combined Charging Unit in the i7 allows for up to 11 kW with an AC (level 2) charger and up to 195 kW with a DC (level 3) unit. Using the latter, BMW claims a user can get up to 128 kilometres of range with just 10 minutes of charging. In terms of the overall, the i7 has an anticipated range of 498 kilometres based on EPA testing.

Okay, I must get to the cabin because there’s so much going on in there. In fact, there’s a bit too much, so I’m going to pick a few highlights. I sat in both cars, front and back, and the level of luxury on hand is sumptuous, as one might imagine, but a few things stand out.

Up front, BMW has reduced the number of physical buttons and switches significantly and has replaced many of them with its first-ever Interaction Bar. This illuminated touch-panel strip, which is backlit with a crystalline surface, runs the width of dashboard and into the door panels, and houses climate functions and opens the glove box. And yes, its colour changes based on drive mode, or it can be set by the user. 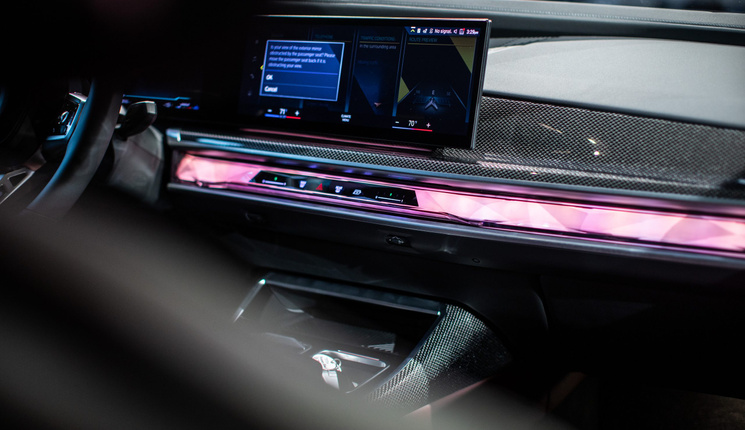 On the digital display front, the i7 has two screens up front and one in back. The front screens consist of a 12.3-inch instrument cluster display and a 14.9-inch multimedia unit. These units are fused together under one big touch panel called the BMW Curved Display. The graphics and user interface has been designed to mirror that of a smartphone and offer deep levels of configurability.

The rear seating area deserves some going over here, because as impressive as the previous Executive Lounge was, what I experienced in the back of this pre-production i7 was mind-blowing. 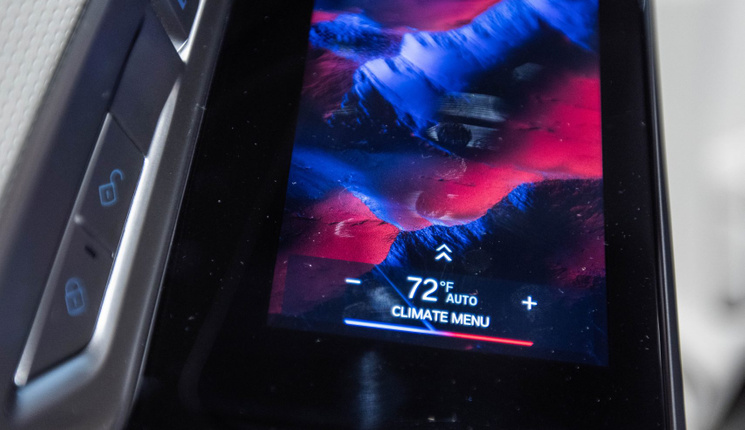 First off, there are twin 5.5-inch touchscreens located in each door panel that can be used to adjust everything from climate functions to entertainment options, including music and volume, sunshades, and seat massaging! Yes, I spent a lot of time fiddling with all of these, especially the latter, in both cars.

As impressive as that was, the showstopper here is the rear seat entertainment screen, a 31.3-inch, motorized, flip-down-from-the-ceiling 8K touchscreen wonder. Okay fine, it’s officially called the BMW Theater Screen, and it comes with built-in Amazon Fire TV and supports other third-party apps that may require subscriptions. It can also be used for streaming videos, playing games, listening to music, and viewing downloaded content. 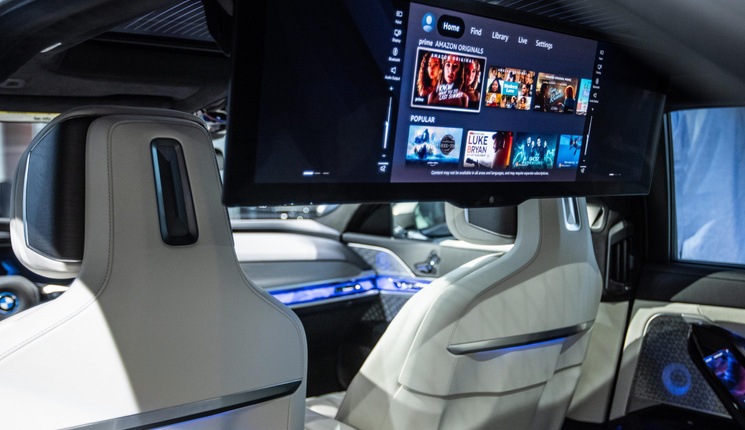 BMW Canada product and technology manager Jean-Francois Taylor and I sat through a quick demo, and it was impressive, to say the least. Firstly, all sunshades automatically go up when the screen is in use so as not to distract other drivers.

Then, the demo begins – it was a trailer for a Lord of the Rings spin-off, I think – and the screen’s aspect ratio expands from 16:9 to 21:9 and finally to 32:9 cinemascope, with theatre sound being pumped into the cabin from the optional Bowers & Wilkins Diamond Surround Sound System, which has 36 speakers and 1,965 watts of power.

And while this was happening, I was being treated to the changing colours of the Panoramic Sky Lounge LED Roof, a fixed glass panel with threaded LED backlighting that changes with drive mode or can be set by the user. Because when you’re having your senses blown by a 31-inch 8K movie screen and 1,965 watts of surround sound, why not enjoy a lightshow, too?

I could go on, but I think you get the picture. The i7 is a technological marvel, and I’ve only scratched its surface here.


Before I wrap up, I’ll touch briefly on the 760i xDrive. To reset, this is the long-wheelbase variant. The U.S. will also receive the V6-powered, short-wheelbase 740i, but for Canada it’s the bigger 760i only in terms of gas-powered models. 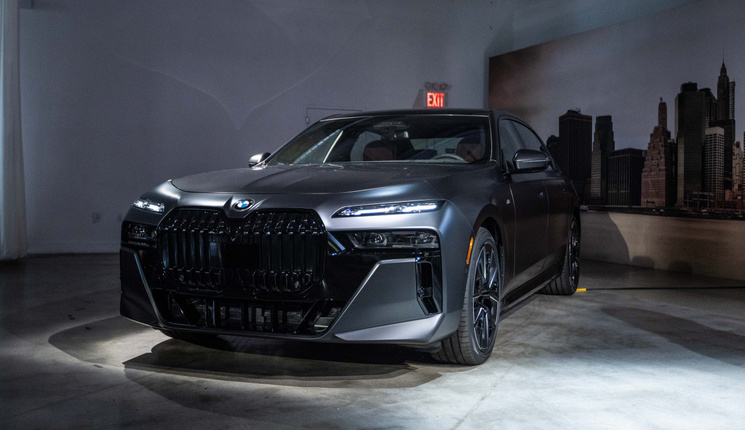 What I said about the i7 in terms of content also applies to the 760i, so I’m not going to touch on that, The 4.4-litre TwinPower Turbo V8 has been given a thorough update and now a has 48-volt mild hybrid system for improved power under acceleration and better fuel efficiency. In terms of output, the mild hybrid generates 147 lb-ft of torque and up to 12 horsepower. The output boost is stored in a 48-volt battery located under the trunk, and it’s charged via braking recuperation. Total power output is rated at 536 horsepower and 553 lb-ft. of torque, with an estimated 0-100 km/h time of 4.2 seconds.