As a kid – heck, as an adult – a good many of us are told by people who wear beige slacks that too much of a good thing is … something. They generally sound like Charlie Brown’s teacher by the time they get to the end of their sentence, don’tcha think?

This time around, however, they may have had a point. Late February in Quebec is prime time for skiing and all sorts of snowy adventures, including winter tire testing. The problem on this occasion was that it seemingly wouldn’t stop snowing long enough to make the 100km trek to Circuit Mécaglisse in order to sample Michelin’s newest winter rubber, the X-Ice Snow.

A few quick phone calls by Michelin’s finest got us back on (and to) the track. Three all-wheel drive Ford Escape SUVs appeared, shod with new copies of the X-Ice Snow, piloted by the pro driving instructors working at Circuit Mécaglisse. Having these folks take us from outside of Montreal to Notre-Dame-de-la-Merci was like having Gordon Ramsay make supper at your home out of ingredients he found in your cupboard. 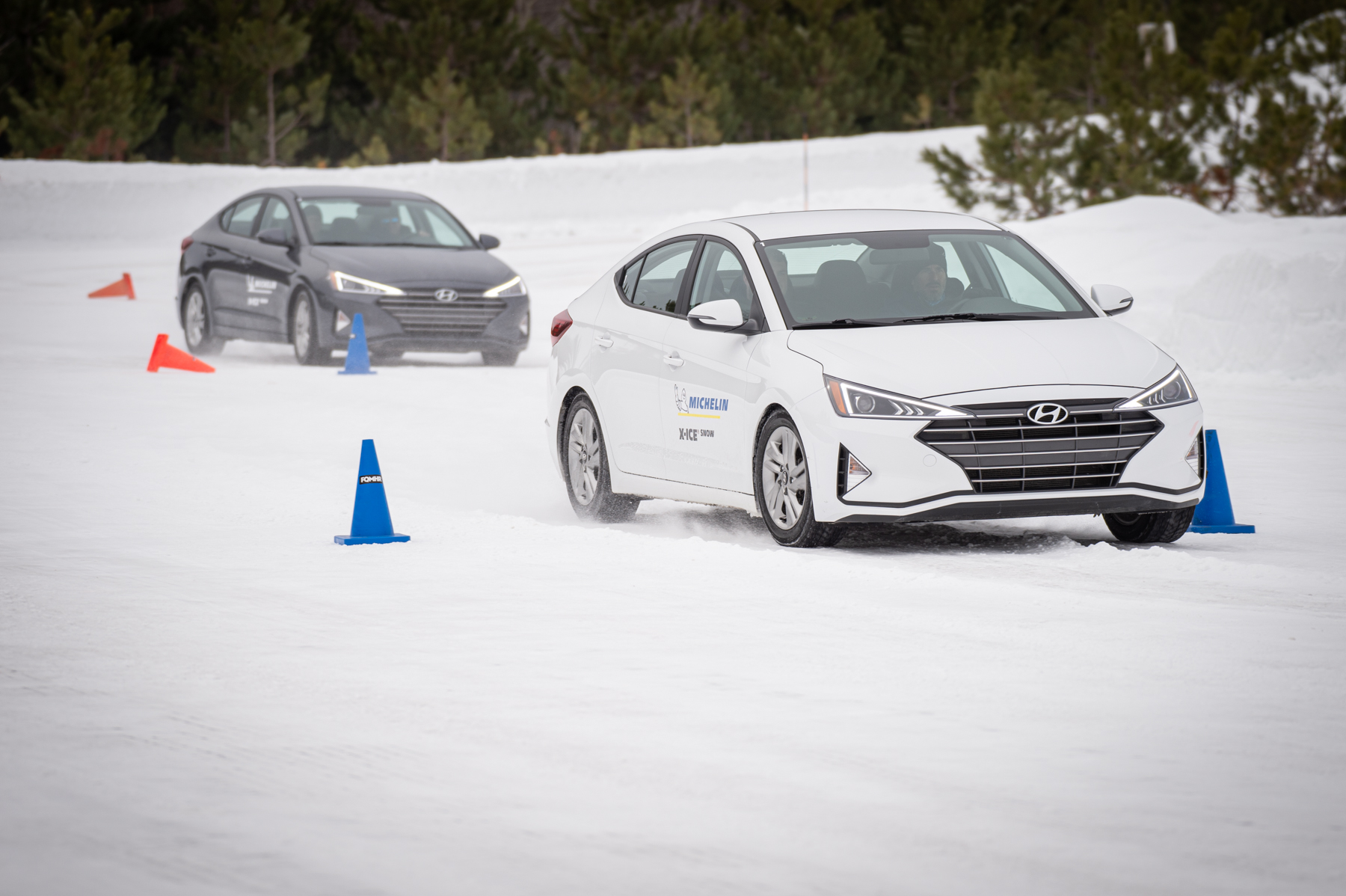 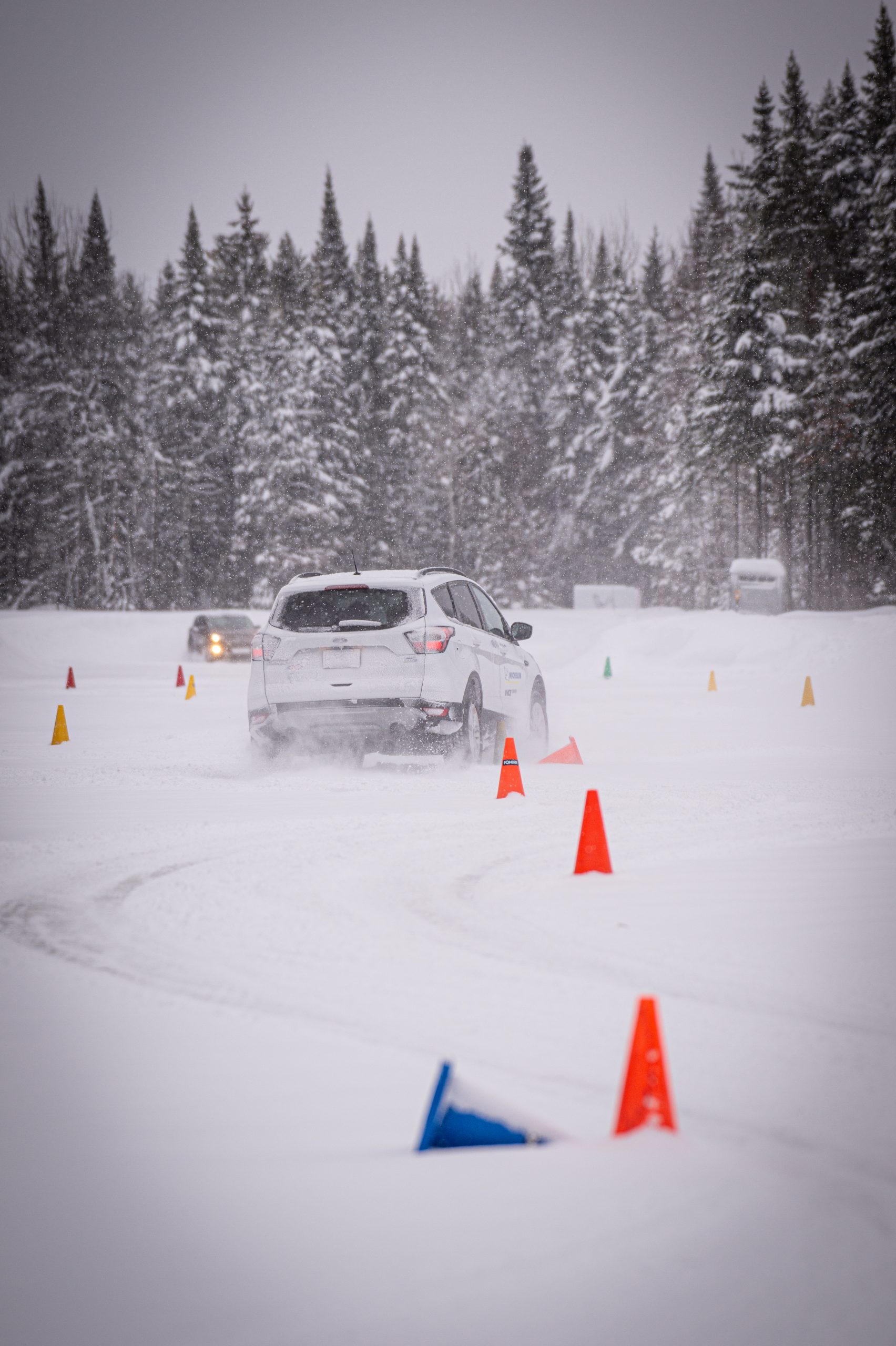 You’ll recognize the X-Ice sub-brand, if not the ‘Snow’ suffix that now appends it. In the past, Michelin made much of the X-Ice tire and its ability to grip ice like a frightened cat to a wool blanket. The rubber was more than capable of handling deep snow as well but, according to feedback they received from customers and tire dealers, the general perception – rightly or wrongly – was that this hoop was best suited for conditions resembling a skating rink and not the daily snow obstacles most Canadian drivers face four or five months of the year.

The company went back to the drawing board and sought to change that court of public opinion. It’ll not escape your notice that the X-Ice Snow looks significantly different from last year’s X-Ice Xi3, binning the centre channel and instead offering a meatier and slightly less symmetrical tread pattern. They’re calling it their next-gen V-shaped tread design, providing 100% use of the contact patch for optimal grip on snow and ice and for exceptional slush performance. In testing, it has been shown to maintain its shape and grip features even when worn to continue providing grip towards the end of its serviceable life.

Before diving too deep into that, we’ll provide a quick science lesson to those who are interested. Everyone else can skip this paragraph. Still here? Good.

Now we’ve gotten rid of those Neanderthals, we’ll encourage you to recall that a winter tire’s performance is dictated by both molecular and mechanical attributes. The former is a closely guarded secret mixture of compounds that permit the tire to stay flexible in cold temperatures (this is why a Pilot Sport 4S will send you skidding into a snowbank despite its phenomenal summertime grip). The latter refers to features like tread design and the amount of void between tread blocks. 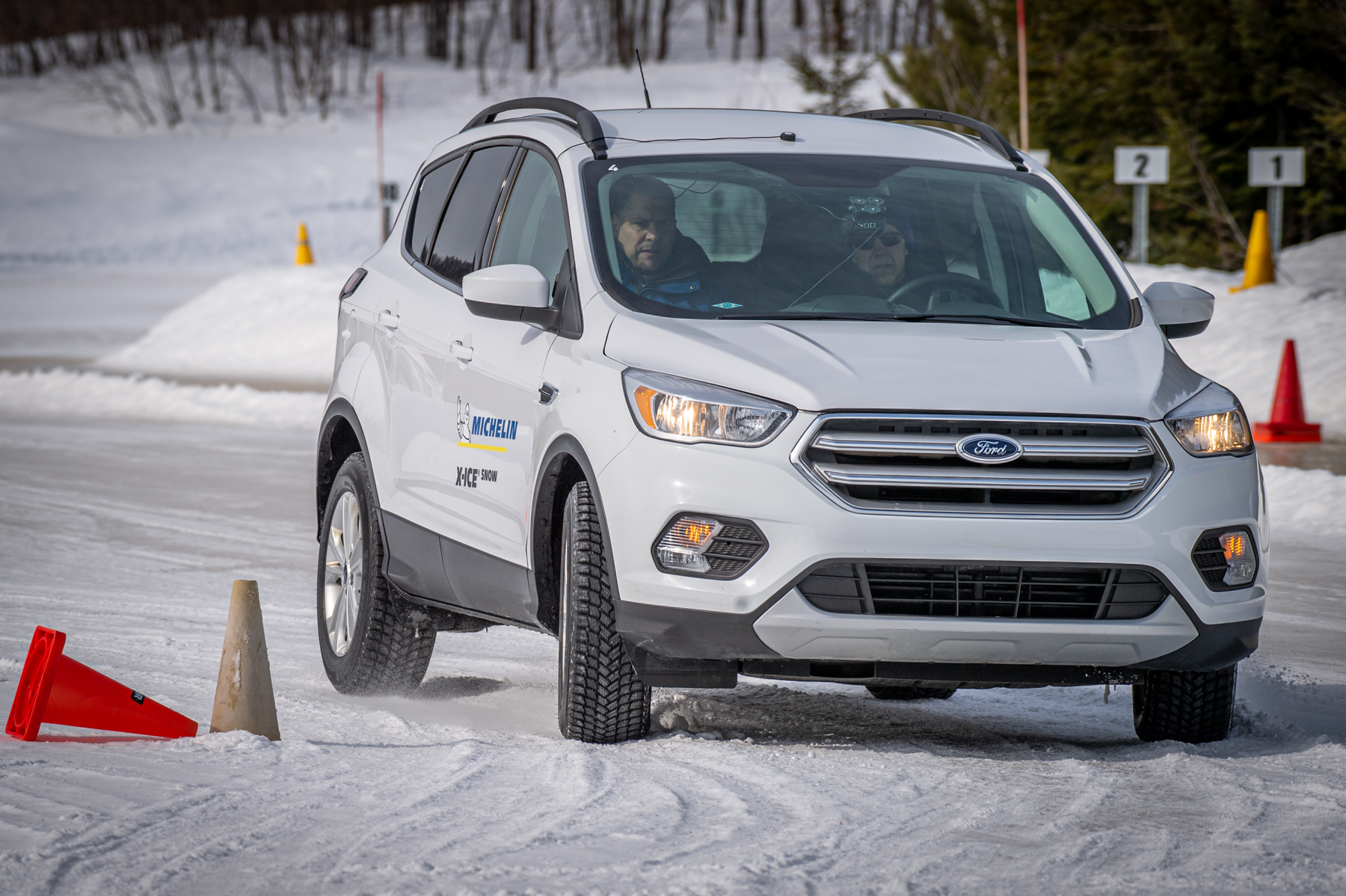 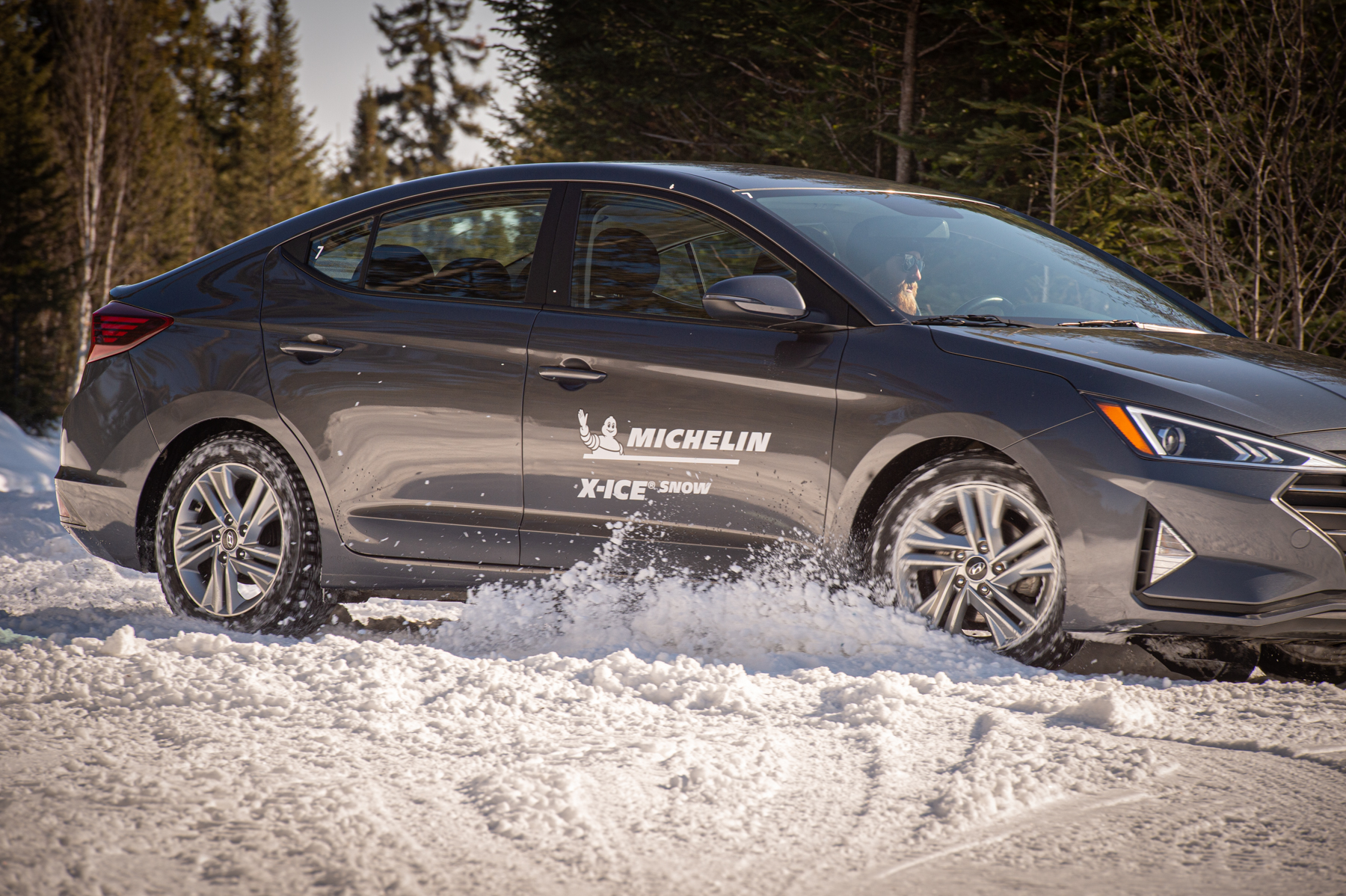 According to Michelin, the new X-Ice Snow carries its mechanical and molecular features all the way through its tread blocks down to a wear measure of 2/32 (about 1.5mm). This is important, they said, because some competing winter tires revert to an all-season style of compound at about 5/32 (4mm), negating the point of having winter tires on in the first place. A new winter tire generally has a tread depth of between 12/32 and 14/32 of an inch (roughly 9.5 – 11mm).

Eager to show us, the company had a pair of new Hyundai Elantra sedans on hand wearing a set of X-Ice Snow rubber that had its tread depth shaved to 4/32 of an inch (about 3mm) and then driven on about 100km of public roads. Flinging the compact sedan up a twisty snow-packed road course, it was easy to feel the tires using their Flex-Ice 2.0 compound, a silica-based compound intended to maintain flexibility in cold temperatures while remaining firm in moderate conditions, to bite into the packed snow and find front-wheel drive purchase for lateral and straight-line grip.

Switching to those all-wheel drive Escapes we used earlier to make our way to the track, equipped with full-tread X-Ice Snow rubber, revealed the traction these hoops provide under slalom and sweeping turns like one would find in a highway off-ramp. X-Ice Snows made for SUVs have some components added to the tire so it can handle the extra weight of an SUV but retains the same rubber compounds and tread patterns.

It took an excessive amount of sawing of the steering wheel to upset the X-Ice Snow, far more than any sane driver would do on public roads. The long off-ramp style sweeper, made more difficult by the sudden appearance of orange cones forcing a quick steering correction, was a relevant real world test of conditions in which many commuters will find themselves. The tires tracked straight and predictably, with no spooky characteristics save for the odd squeak from my driving instructor who was encouraging me to go faster.

What’s that about too much of a good thing, again? 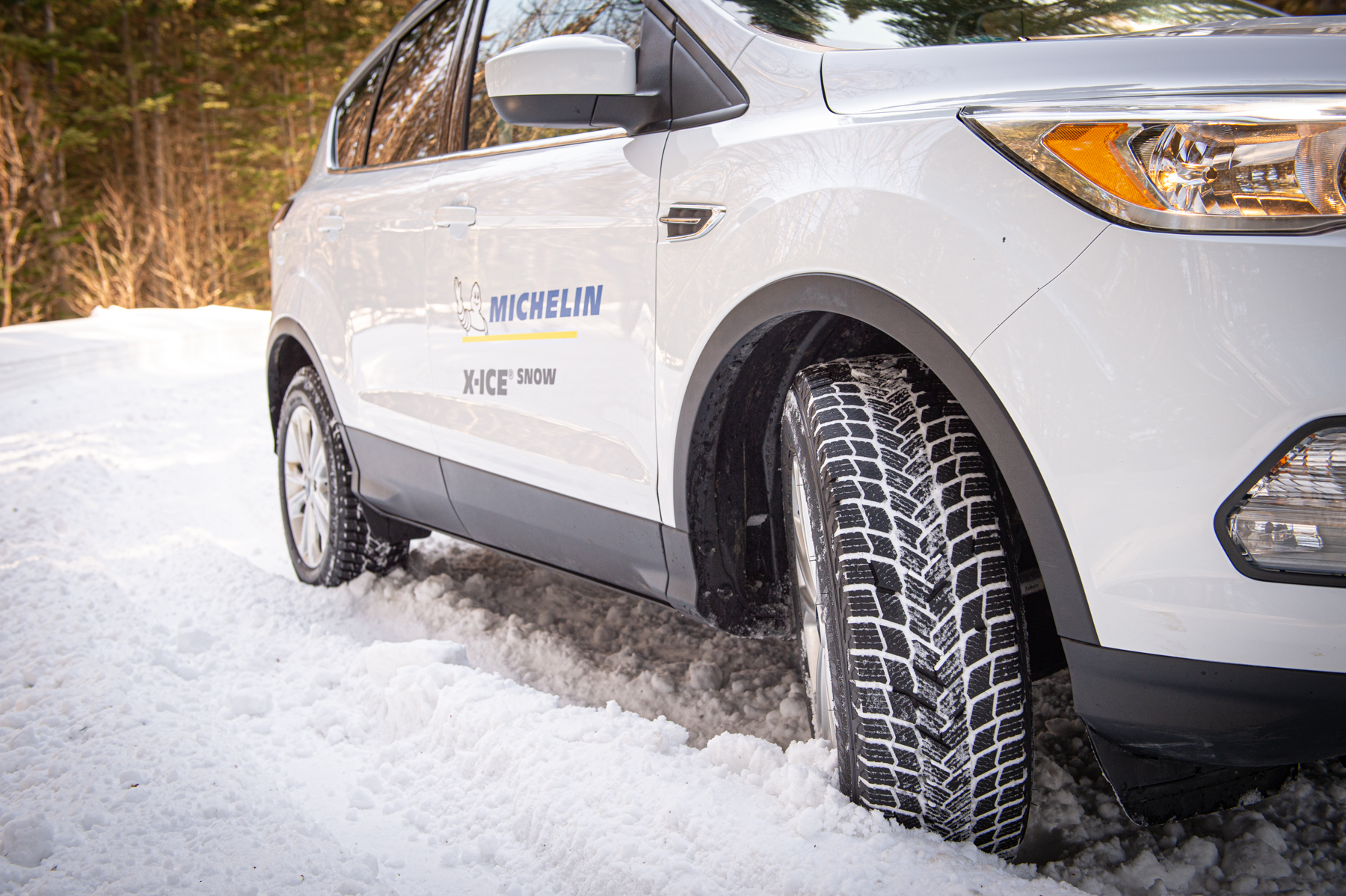 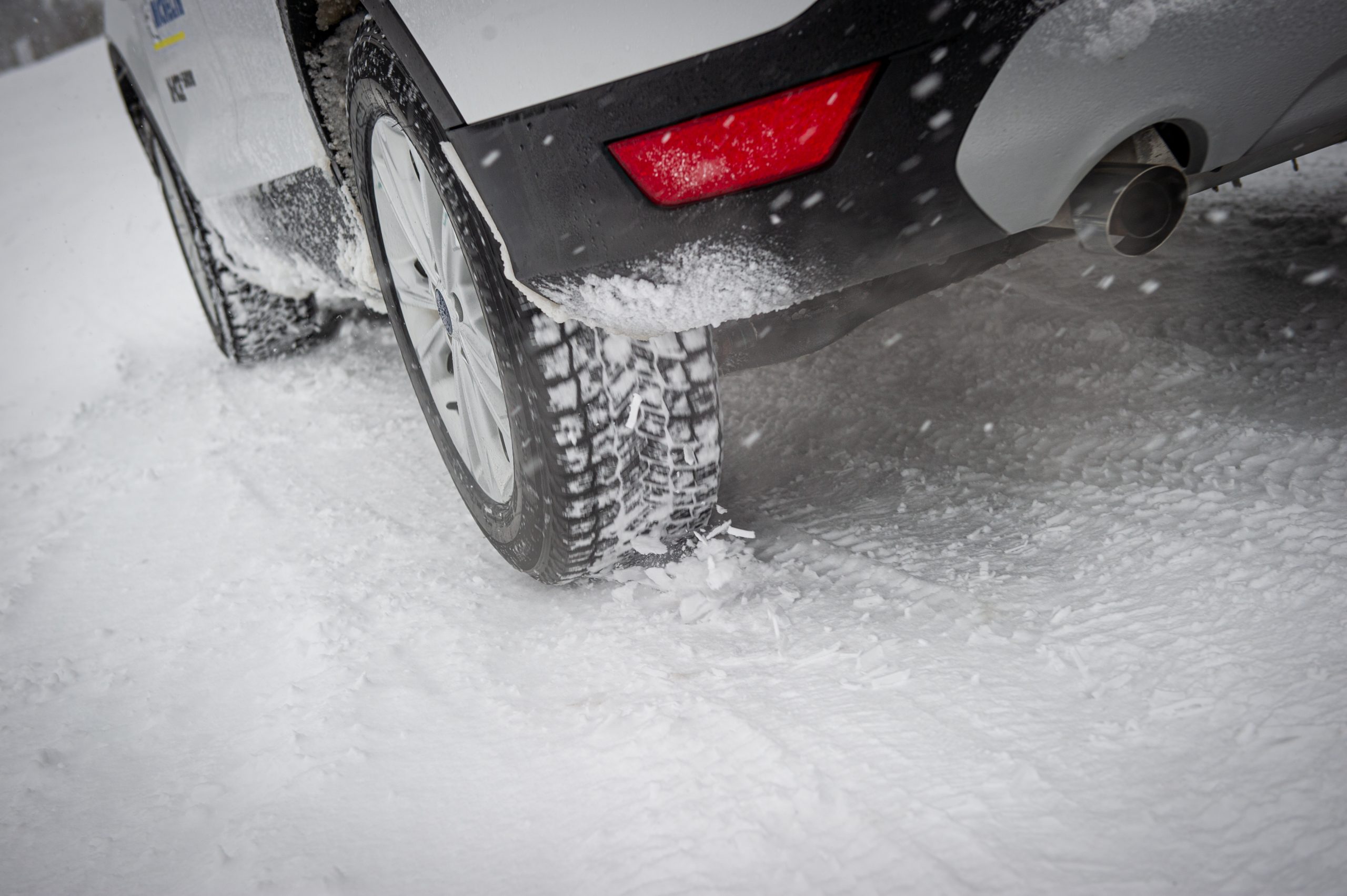 Replacing both the X-Ice Xi3 and Latitude X-Ice Xi2 tires, the X-Ice Snow will bear a 60,000 kilometer warranty and initially show up in the market with 82 sizes. They’re all P tires, according to a Michelin official at the event, so those looking for an LT tire will have to shop elsewhere. An additional 41 sizes will be released by the end of 2021 and, in an effort to keep pace with the ever-growing diameter of stock wheels. Nearly four-dozen of the tire’s sizes are in excess of 18 inches. There will also be a trio of zero pressure sizes, good for those rigs that don’t have space for a spare.

You should also know that a solid 85% of the X-Ice Snow tires for the North American market will be made right here in Canada at the company’s Nova Scotia facility. The company has made a significant investment in a plant revamp, dedicating it to the production of winter tires.

Look for the X-Ice Snow at tire dealers in time for the white stuff to fly later this year. 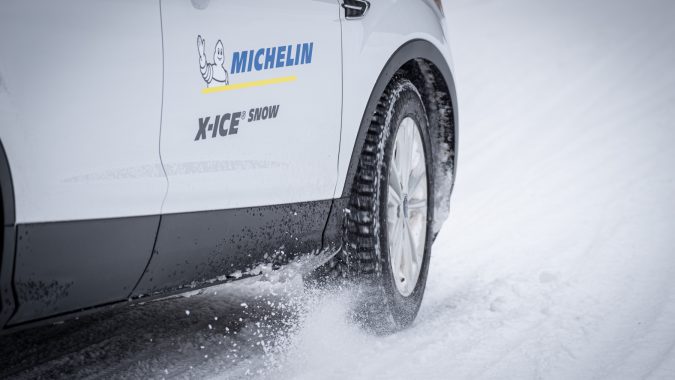 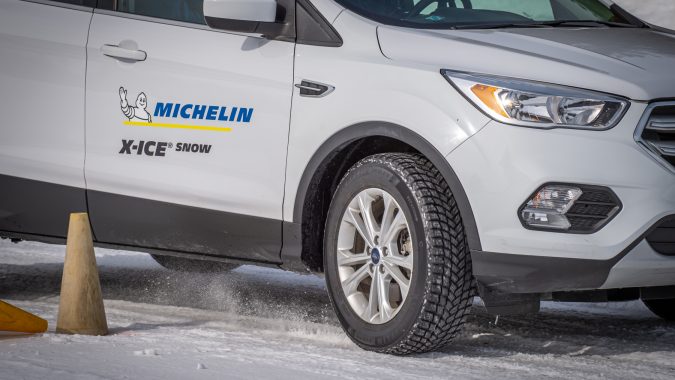 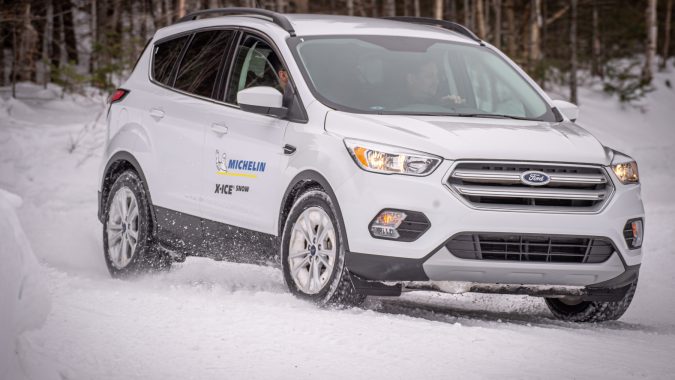 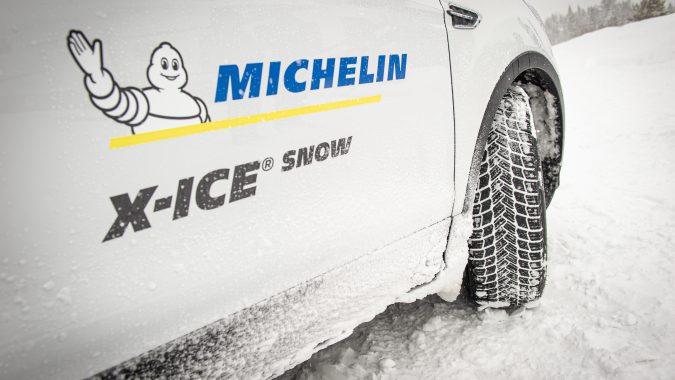