Subaru debuts 2024 Impreza as hatchback only

The manual transmission is gone but the Impreza RS is back.

Join the Conversation (0)
If you haven’t glanced at the compact Subaru Impreza offerings at your local dealer in Canada lately, you may be surprised: there are currently no more Impreza sedans offered in Canada, or manual transmissions, which have both quietly dropped off the offer sheets in the last couple years. Call it a precursor to the future.

As for Subaru’s upcoming next-generation 2024 Impreza slated to arrive next year, the all-new Impreza will be available only as a hatchback model throughout North America, and only with a continuously variable automatic transmission.

Realistically, Subaru has never been a major powerhouse in the Corolla/Civic/Mazda3 sedan sales wars, so the company has decided to shift its focus to take on the hatchback versions of those vehicles. Its standard full-time all-wheel drive remains a unique advantage.

The compact car segment is shrinking in general in Canada, as most car sales are, noted Brad Evans, the Impreza Car Line manager for Subaru Canada, with the move to crossovers and sport-utilities. “Impreza buyers have always liked its Swiss army knife abilities,” he said, just before the LA auto show’s opening.

For the upcoming 2024 Impreza, all-new bodywork, increased technology and a return of a more powerful RS model are amongst the most notable changes for this next-generation version. There’s also a new Sport-Tech trim above the RS model that’s unique to Canada, which brings a more luxurious interior with leather seats and an embedded navigation system.

Most Impreza models will be powered by the same engine that’s in the car now with some refinements, a 2.0-litre boxer four offering 152-hp and 145 lb.-ft. of torque, mated to a CVT automatic. Keep in mind the WRX is now its own model, and no longer an “Impreza WRX”, so it was technically introduced first and is no longer part of the Impreza family.

Therefore the new RS model is the next step up for Impreza buyers looking for a little more driving spice, which harkens back to 1998, when the RS was the Impreza’s performance model that eventually led to the rally-inspired WRX models. The Impreza RS uses a larger 2.5-litre boxer four, putting out 182 hp and 178 lb.-ft. of torque, mated to a CVT enhanced with paddle shifters and an “8 speed” manual mode. It also receives a version of the WRX sports car’s dual-pinion electronic power steering rack, while all Impreza seats are now bolted direct to the chassis with more ergonomically designed chairs, increasing both refinement and driving comfort.

Fuel economy and pricing haven’t been revealed yet, but you will be able to travel longer on one tank of fuel, thanks to the updated Subaru Global Platform (we don’t come up with these names), which leaves more room for a 63-litre gas tank, versus 50 litres previously. 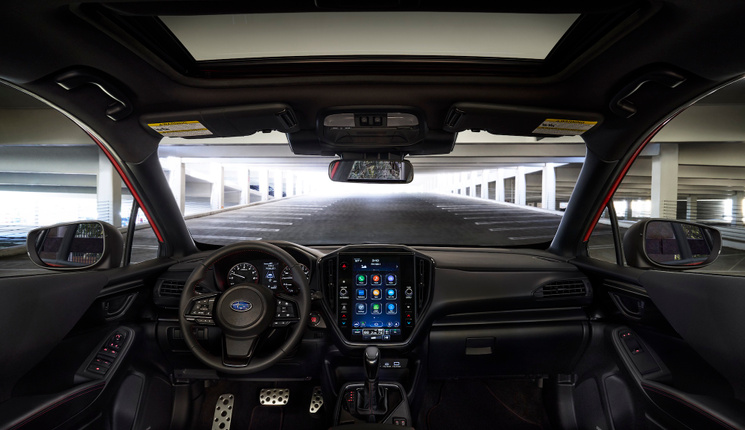 Safety-wise, the Impreza adds Subaru’s latest fourth-generation EyeSight system borrowed from pricier models, which includes a third camera for better pedestrian and cyclist detection. The system includes an advanced Automatic Emergency Steering system, which will veer out of the way of detected objects at city speeds (max 80 km/h), though it is smart enough not to cross a solid yellow line into oncoming traffic, said Subaru.

On RS and Sport-Tech trims, the Impreza will also offer Subaru’s DriverFocus system for the first time, which recognizes the driver, and can adjust automatically to personal profiles based on your face to adjust mirror, seat and infotainment settings. There’s also a drowsiness detection system, which will beep and warn when it detects you’re not paying attention to the road, or falling asleep.

With the 2024 Subaru Impreza’s debut at the LA show this year, it’s difficult not to compare it with the 2023 Toyota Prius hatchback that was also launched here. Which for Canada will also come standard with all-wheel drive, and come with more power than either the regular Impreza or the more powerful RS. They haven’t traditionally been market rivals, but the contrast in approaches is striking: conservative evolution for Subaru, and a much more extensive technology and styling overhaul for the Toyota.